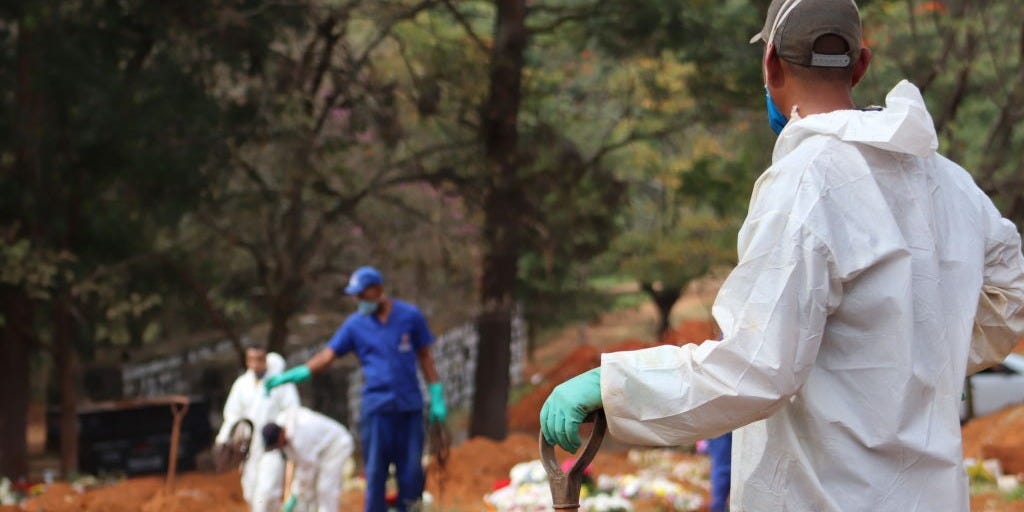 Jose Antonio de Moraes/Anadolu Agency via Getty ImagesThe Vila Formosa cemetery, where the dead bodies of the coronavirus (Covid-19) pandemic victims are buried in Sao Paulo, Brazil on May 22, 2020.

Younger people are dying at unprecedented rates from COVID-19, the disease caused by the novel coronavirus, as developing countries become new hotspots for the pandemic, The Washington Post reported.

As the coronavirus has been ravaging countries in the developing world like Brazil and India, young people make up a population of the victims and hospitalized patients at a rate unseen in previous epicenters, according to the report.

In Brazil, people under 50 account for 5% of deaths, ten times greater than that recorded in Italy or Spain, the Post reported, and in Mexico, nearly one-fourth of the dead were aged between 25 and 49. In India, another rising hotspot, officials reported this month that nearly half of the dead were younger than 60, according to the Post.

The same trends can be seen in hospitalizations for patients with extreme cases, the Post reported, like in Brazil’s Rio de Janeiro state, where more than two-thirds of hospitalizations are for people younger than 49.

The Post wrote that experts point to existing issues like overwhelmed healthcare, extreme poverty, and inequality as exacerbating factors in the death tolls recorded in developing countries.

In India, the explosion of cases in Mumbai has been connected to the dense cityscape and the conditions in areas like Dharavi, Asia’s largest slum, where hospitals are overwhelmed, police forces overextended, and social distancing is impossible, the New York Times reported.

Though authorities announced in the initial weeks of the pandemic that older individuals were the most at-risk of death from the novel coronavirus, the past few months have provided widespread evidence that infection and serious cases are likely to strike younger people between 20 and 44 and analysis like the Post’s highlights the grim effect socioeconomic factors have on who is more likely to dodge or survive the virus.

In the US, officials have identified sharply higher rates of coronavirus infections and deaths among non-white Americans in preliminary data that have been connected to higher rates of co-morbid diseases and other issues like limited access to healthcare.

After initial numbers from states like Michigan, Illinois, and North Carolina reported last month showed African Americans were by far the hardest hit by the coronavirus, experts clarified that the pandemic did not run through all communities equally.

A recent study by amfAR in coordination with a team of epidemiologists and clinicians from four US universities reported by CNN concluded that a wide array of “structural factors including health care access, density of households, unemployment, pervasive discrimination and others drive these disparities, not intrinsic characteristics of black communities or individual-level factors.”