Buffett’s net worth has plunged by more than $US20 billion this year to about $US69 billion, while Zuckerberg’s wealth has swelled by about $US11 billion to north of $US89 billion, according to the Bloomberg Billionaires Index.

Their fortunes are closely tied to their respective companies’ stock prices: Buffett owns about 16% of Berkshire, while Zuckerberg owns 13% of Facebook.

The roughly 23% slump in Berkshire shares since January has hammered Buffett’s net worth, while the 14% surge in Facebook stock has boosted Zuckerberg’s net worth over the same period.

However, the scale of their philanthropy is another big factor. Buffett gave nearly $US15 billion to charity between 2014 and 2018, dwarfing the $US1 billion given by Zuckerberg and his wife, Priscilla Chan, according to a list of America’s 25 biggest givers compiled by Forbes and SHOOK Research.

It’s worth noting their philanthropy gap is set to close in time, as both Buffett and Zuckerberg plan to give away almost all of their money.

“More than 99% of my wealth will go to philanthropy during my lifetime or at death,” Buffett vowed as part of The Giving Pledge, an initiative he launched with Bill and Melinda Gates in 2006 to encourage billionaires to give away the majority of their fortunes.

“We will give 99% of our Facebook shares – currently about $US45 billion – during our lives to advance this mission,” Zuckerberg and Chan said in a public letter to their newborn daughter in 2015. The pair signed The Giving Pledge five years earlier, in 2010.

Here’s a chart showing how Facebook rapidly caught up to Berkshire Hathaway in market capitalisation, and eventually surpassed it, after going public in May 2012: 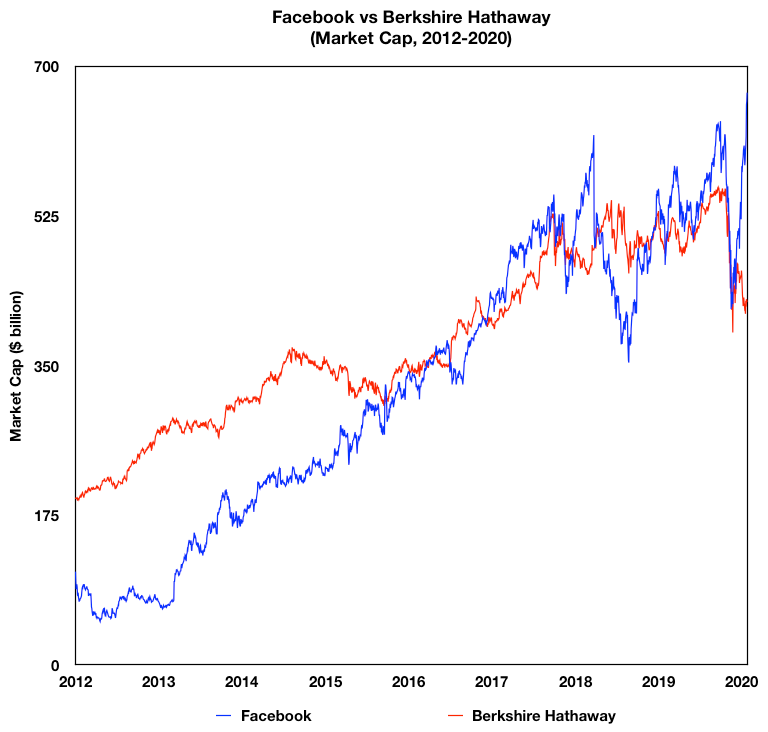