Both of Georgia's Democratic senators oppose cutting eligibility for $1,400 stimulus checks in the Biden relief package 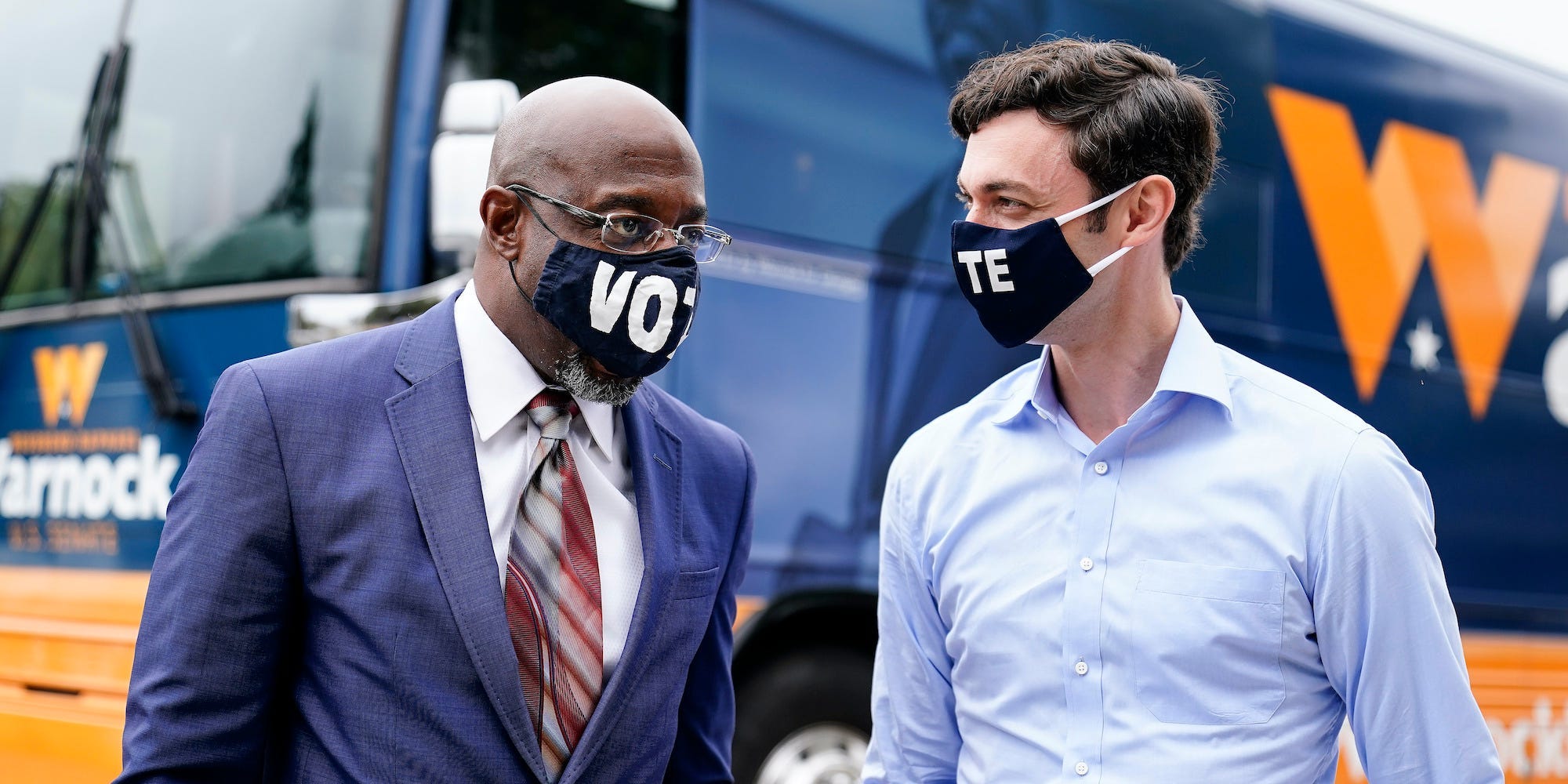 Democrats in Congress are racing to approve President Joe Biden’s $US1.9 trillion rescue package within weeks. But the final threshold for stimulus checks has divided Democrats as they scramble to get federal aid out the door by early March.

Some Democrats are pushing to restrict the payments to lower-income households. The plan under consideration would distribute $US1,400 checks to individuals earning $US50,000 and below as well as couples making $US100,000 or less. NBC News reported its drawn the support of Sen. Joe Manchin of West Virginia, a conservative Democrat.

But the idea isn’t sitting well with a pair of freshman Democrats: Sens. Jon Ossoff and Raphael Warnock of Georgia. Both won the Senate runoffs early last month, partly on pledges to deliver voters $US2,000 stimulus checks. Their surprising victories handed Democrats a wafer-thin majority in the Senate.

Now, Warnock and Ossoff are emerging as staunch advocates for a large economic aid package.

A spokesperson for Ossoff confirmed to Insider the new Georgia senator opposes restricting the income threshold on $US1,400 stimulus checks. The Washington Post first reported it.

Working and middle class Americans have been crushed by this crisis and deserve immediate financial relief. That’s why I’m fighting against cuts to the direct payments families are counting on. Send the people help!

“Working and middle class Americans have been crushed by this crisis and deserve immediate financial relief,” Ossoff tweeted on Monday evening. “That’s why I’m fighting against cuts to the direct payments families are counting on. Send the people help!”

During a confirmation hearing for Neera Tanden, Biden’s pick to head the Office of Management and Budget, Ossoff made the case that nurses and teachers could be locked out of receiving federal payments if the check thresholds were cut significantly. Tanden agreed.

Warnock is also resistant to scaling back eligibility. He told Insider on Monday there was a bigger danger in doing less to combat the economic and health crises, and urged “a robust package.”

“I think people making $US75,000 in Georgia are struggling in many instances,” he said. “I am committed to getting as many people help as soon as we can.”

Their resistance comes as House Democrats dismissed efforts on Monday to curtail the direct payments in initial stimulus legislation. The plan would send the full payments to individuals earning $US75,000 or less, and couples making $US150,000 or under â€” the same thresholds that Biden laid out in his relief plan.

Committees are set to mark up and adjust the legislation over the next two weeks, so additional changes are still possible. Democrats are using the reconciliation process, a manoeuvre allowing a bill to pass with a simple majority of 51 votes instead of the 60 generally required to ward off a filibuster.

House Democrats are aiming for a floor vote during the week of Feb. 22, and the Senate will take up the legislation sometime after. But the second impeachment trial for former President Donald Trump over his role in the Jan. 6 insurrection at the Capitol kicked off on Tuesday. Both parties are interested in bringing it to a close in a week.

Sen. Chuck Schumer of New York, the majority leader, argued that Democrats could juggle the trial alongside coronavirus relief.

“Senate Democrats will not do dither, dilute, or delay because the COVID responsibility is so real,” Schumer said at a press conference on Tuesday.