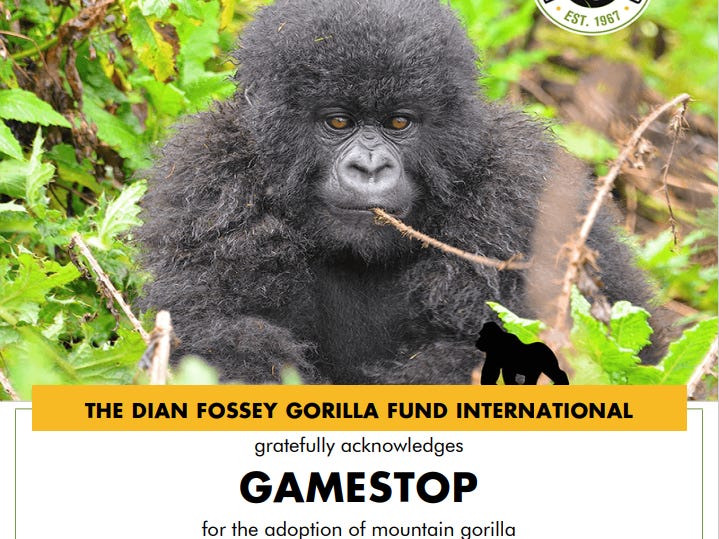 WallStreetBets, the Reddit page that spearheaded the rise of GameStop stock, has raised over $265,000 for a gorilla-conservation fund.

On Friday, a user posted that they had sent a donation to the Dian Fossey Gorilla fund that allowed them to ceremoniously “adopt” their own gorilla. The post was upvoted over 100,000 times and the idea quickly caught fire with the WallStreetBets community.

Since you can’t buy stocks over the weekend, the community decided to spend some of their new money earned from GameStop stock, which hit $350 last week, on something positive.

Created in 1972, the fund is one of the oldest and longest-running primate-conservation organizations, helping to track and protect gorilla populations. Gorillas protected by the fund are considered adopted by donors supporting the organization.

The gorilla connection comes from “ape gang,” an internal nickname for the subreddit, referencing the idea that the group is like a bunch of monkeys pressing buttons on a keyboard to buy stocks. Users frequently spam posts with gorilla emojis to allude to their so-called “ape gang.” 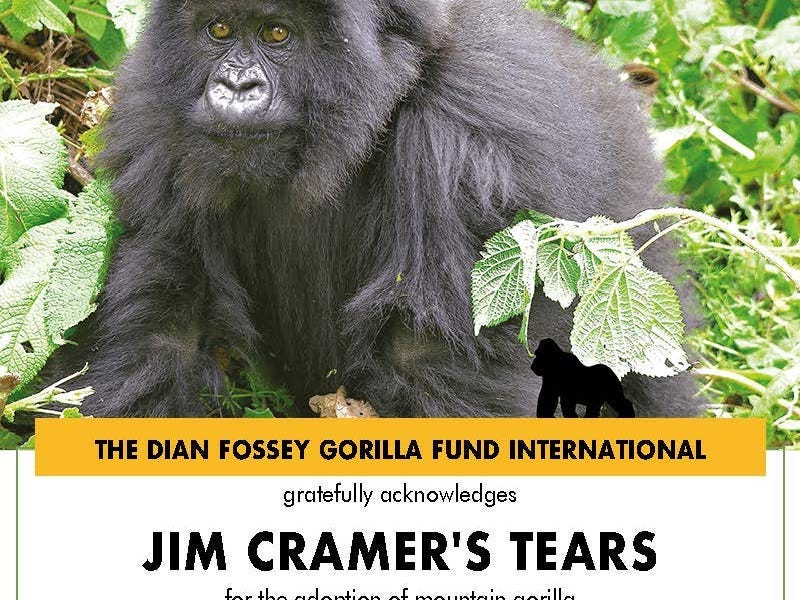 Reddit/GriffyTizzleJim Cramer, host of Mad Money on CNBC, has been against those on the reddit

On Saturday and Sunday, the front page of the subreddit was flooded with adoption screenshots, with users using meme-inspired aliases like “GameStop,” “Jim Cramer’s Tears,” and “Tendie” in their adoptions. There were so many new adoptions hitting the subreddit that the moderators created a megathread where users could post their new animal buddies.

Adopting your own gorilla on the Dian Fossey Gorilla Fund website costs anywhere from $60 to $150. For this one-time donation, you’ll receive a video of the gorilla in action, a certificate, and a yearly update on your new furry friend.

This seemingly random snowball of philanthropy has been noticed by the fund, which added the phrase “APES TOGETHER STRONG” to their website and tweeted on Saturday that they had raised $77,000, before breaking $100,000 by Sunday.

The director of the fund, Dr. Tara Stoinski, created a video thanking the people on Reddit for donating money to the fund, which was posted on the subreddit. That post was upvoted over 160,000 times in under a day and received dozens of Reddit awards that cost real money.

“The money these individuals have donated is an investment, not just in the Fossey Fund’s mission of Helping People, Saving Gorillas, but in our planet’s future,” Stoinski told Insider in a statement. “We rely on individual donors who give to us year after year because they know we can be relied upon to be careful stewards of their donations, no matter how large or small.”

WallStreetBets continues to grow in popularity, now reaching 9.5 million members who want to spend money on stocks. Through an attempted coup by moderators and a federal investigation for insider trading, the subreddit has continued to be the hub for traders who just want to see their “stonks” go up.