I walked someone else's French Bulldog during the pandemic, and while it was frustrating at first, it reduced my anxiety and reminded me to slow down 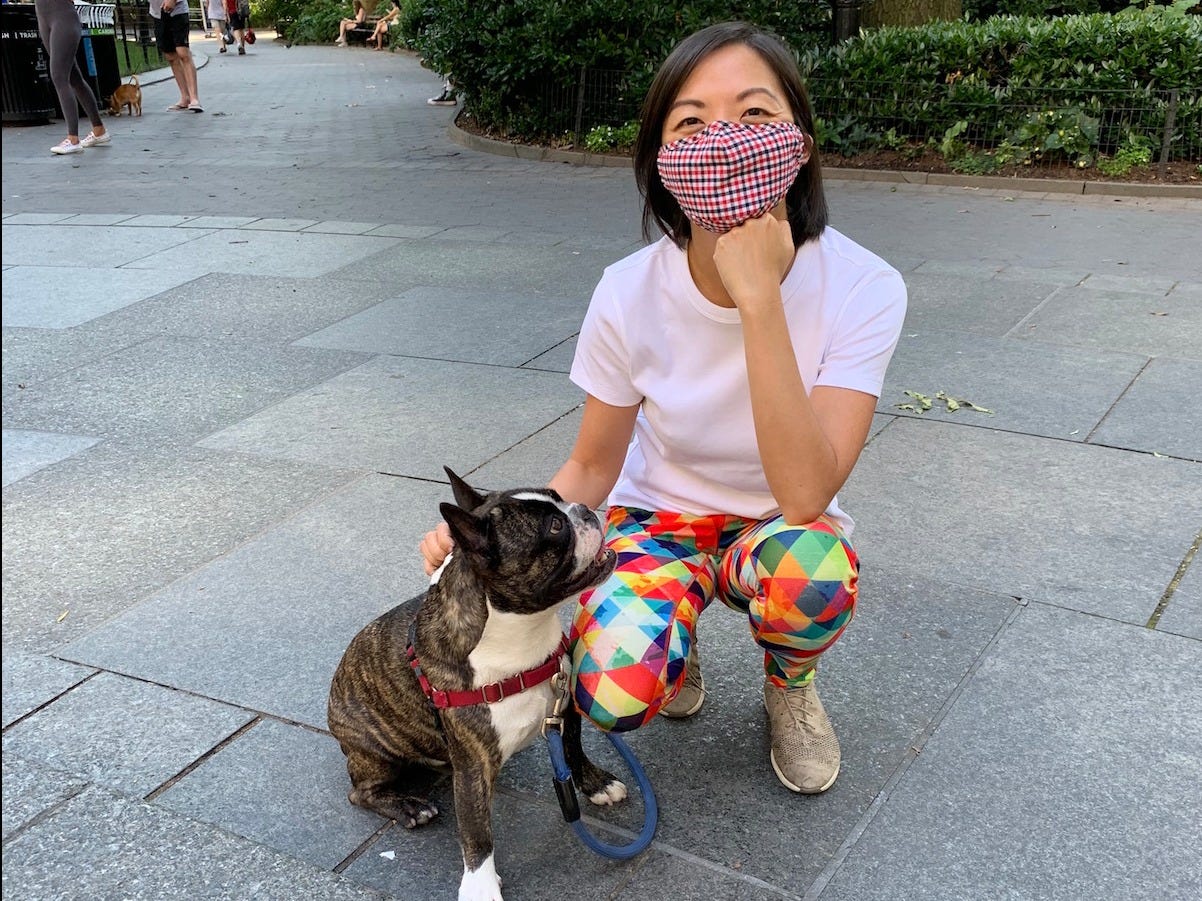 Apple MandyI developed a close bond with Watson after four months of walking him.

Earlier this year, my husband and I moved from Hong Kong – where I had lived for a decade – to New York City.

As a newcomer navigating the city during the coronavirus pandemic, I was longing for a dog. Since my landlord wouldn’t allow it, I thought dog walking could be a fun side gig – not only allowing me to earn extra income, but also to explore the city by foot.

Dog walking wasn’t new to me. Before moving from Manila to Shanghai in 2004, I used to walk my two Shih Tzus Cookie and Chubby, but when they died I decided not to get another dog, as my job involved a lot of travel.

When I arrived in New York, I signed up for dog walking apps like Swifto and Rover. After going through interviews, tests, and background checks, I was contacted by a neighbouring family who wanted me to walk their French Bulldog Watson 30 minutes each day, five times a week, for $US20 per walk. Apple MandyWatson has large bat ears, a white marking on his face, and a muscular build.

I hoped walking Watson would ease my loneliness

30 minutes is short, I initially thought, but I thought the dog’s presence could ease my loneliness and be a source of comfort, companionship, and motivation.

Since I only know a handful of people in the city, the feelings of isolation would sometimes creep in, and I found I wasn’t having much social interaction.

Luckily, studies show the companionship that pets offer can be a great way to reduce anxiety and stress.

Science also suggests the bond we create and the eye contact we make with dogs can release the feel-good hormone oxytocin.

“The bond you create with a dog feels liberating,” Corina K. Skentzou, a licensed mental health counselor and psychotherapist in New York City, told Insider. “Neurophysiologically speaking, it helps your brain produce oxytocin or love hormone, a buffer of cortisol and adrenaline which are elevated due to our competitive societies and stressful lifestyles.”

Watson was stubborn at first, and the first 2 weeks were frustrating

I first met Watson three weeks before the pandemic hit New York City. Like other small dog breeds, he is cute and loveable – he has large bat ears, a white marking on his face, and a muscular build.

Watson wasn’t an easy dog to deal with at first, though; whenever I showed up at the owner’s doorstep, he would run away from me. I had to carry him or lure him with treats so I could put a leash on him.

Watson loved making pit stops in between our walks. He would sniff for leftover food or lick an empty ketchup packet on the ground that I had to wrestle from him. I found myself getting impatient, and instead pulling out my phone and listening to a podcast or browsing Twitter.

The idea of exploring other neighbourhoods didn’t seem appealing to Watson at first, either – he continually walked a specific route to Madison Square Park, and sometimes would make a loop until we reached the park. 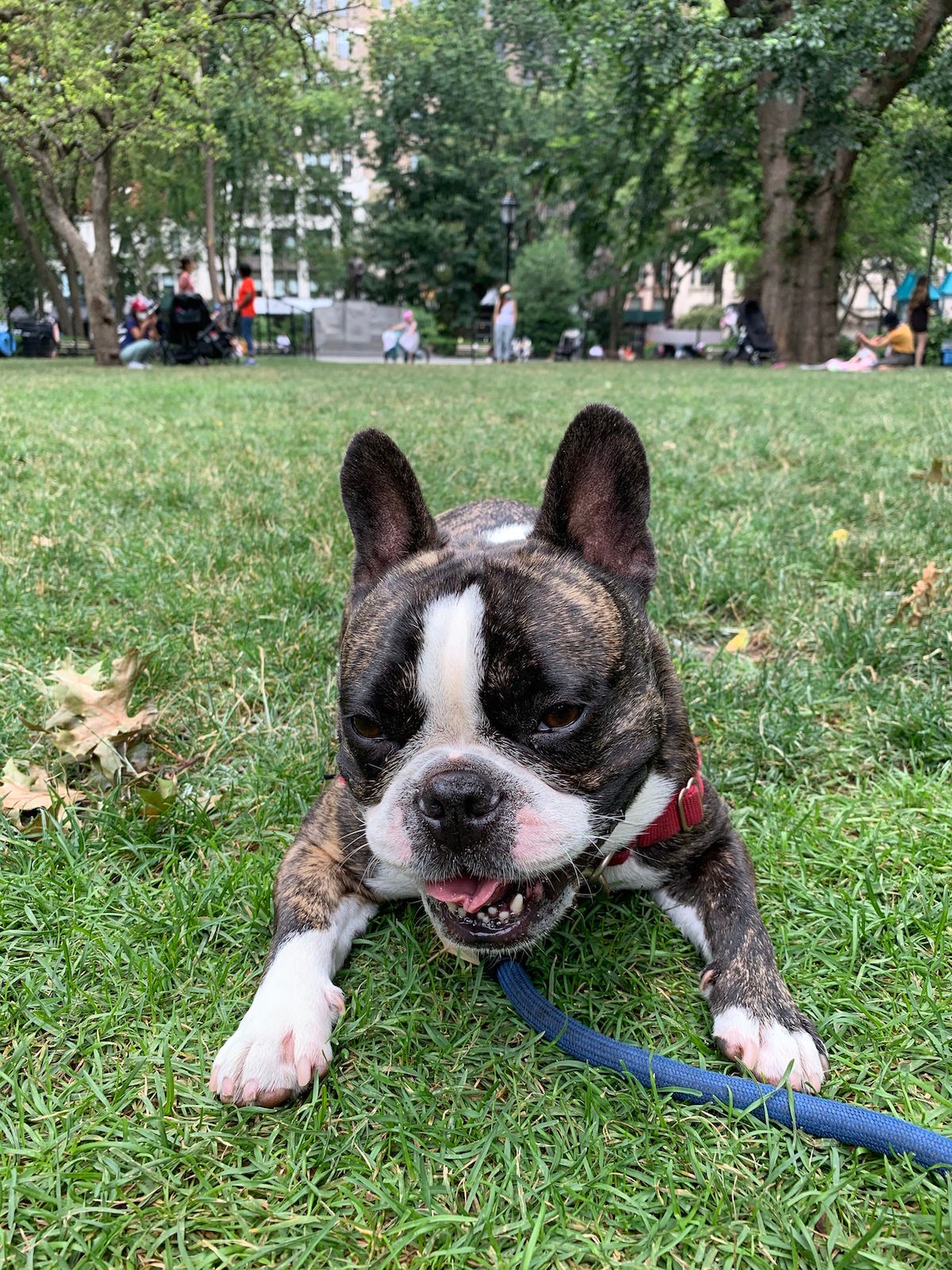 Apple MandyWalks with Watson always ended up at Madison Square Park, where he loves to play in the grass.

When I tried to coax him to walk somewhere different, he would look up at me and refuse to walk. Sometimes I could lightly tug him a little until he went the way I wanted, but more often than not I had to literally pick him up and turn him the way I wanted to go.

When I was forced to stop walking him, isolation took a toll on my mental health

When New York became the epicentre of the pandemic, I didn’t want to venture out any more, as I was afraid of contracting or spreading the virus, so I decided to stop walking Watson until the situation got better.

Thankfully, the owners reassured me the gig would still be available when I decided to come back.

As I kept myself in isolation over the following weeks, I got anxious and stressed about the threat of the illness, my finances, and balancing work and home demands. The stress of the situation took a toll on my wellbeing, both mental and physical.

Despite my initial frustrations, I found I longed for Watson’s companionship and that human-animal interaction more than I expected, so I ultimately decided to start walking him again, giving myself an excuse to go outside and get some exercise (and snuggles, of course).

Walking Watson ended up feeling therapeutic, and gave me the motivation to start my day early. Spending time with him lifted my spirits, reduced my anxiety, and made me feel more socially connected. Walking him to the park led me to interesting conversations with other dog owners or walkers.

“As humans, we’re hardwired for connection,” Skentzou told Insider. “We live in a very competitive society and we don’t allow ourselves to be vulnerable. The lack of connection is correlated to one of the saddest, most anxious, most panicky and loneliest societies ever.” 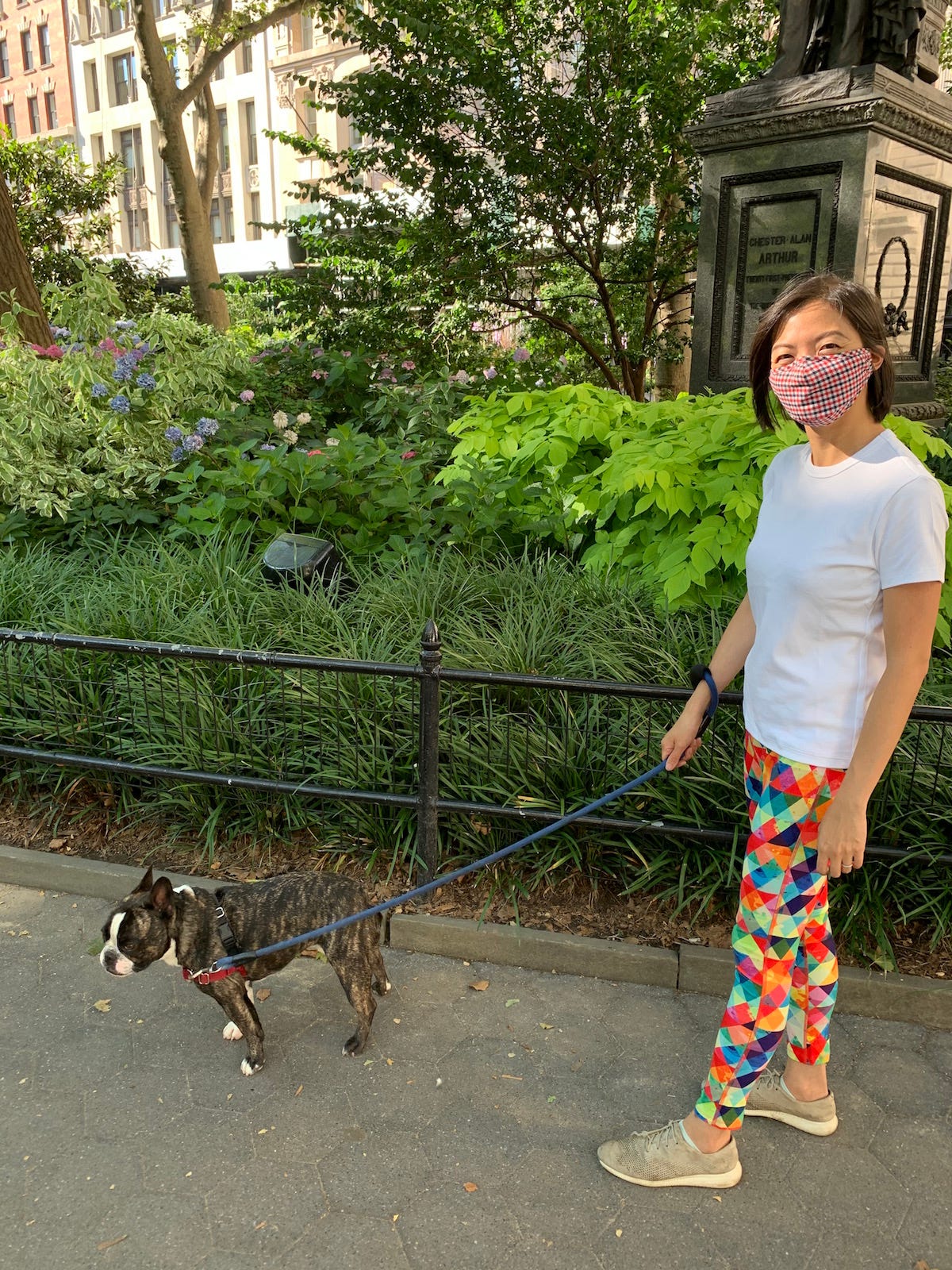 Apple MandyI missed Watson’s companionship when I stopped walking him during the pandemic.

When we reached the park, he would roll in the grass and make me scratch his belly. Rolling back again, he would show his flappy tongue and crooked teeth as if sending me a message that he was feeling happy to be spending time with me.

It’s hard to stay worried or upset with a dog like Watson, who reminded me not to forget the good in life, even in stressful times.

The walks taught me to appreciate the little things

Picking up Watson became a breeze. By 9 a.m., he would already be sitting by the door waiting for me to put a leash on him. I no longer needed to lure him with out treats as he would run straight to the elevator.

Walking Watson taught me to be flexible in situations where I would normally have been uptight. It helped me let go of control by letting him take me the way he wanted – when I did, our walks turned out to be more enjoyable and freeing.

Every day was different, and our walks would typically last for about an hour in the end. He started to stride right past Madison Square Park, and has shown me pockets of Broadway and Little Italy, places I’d never been before. 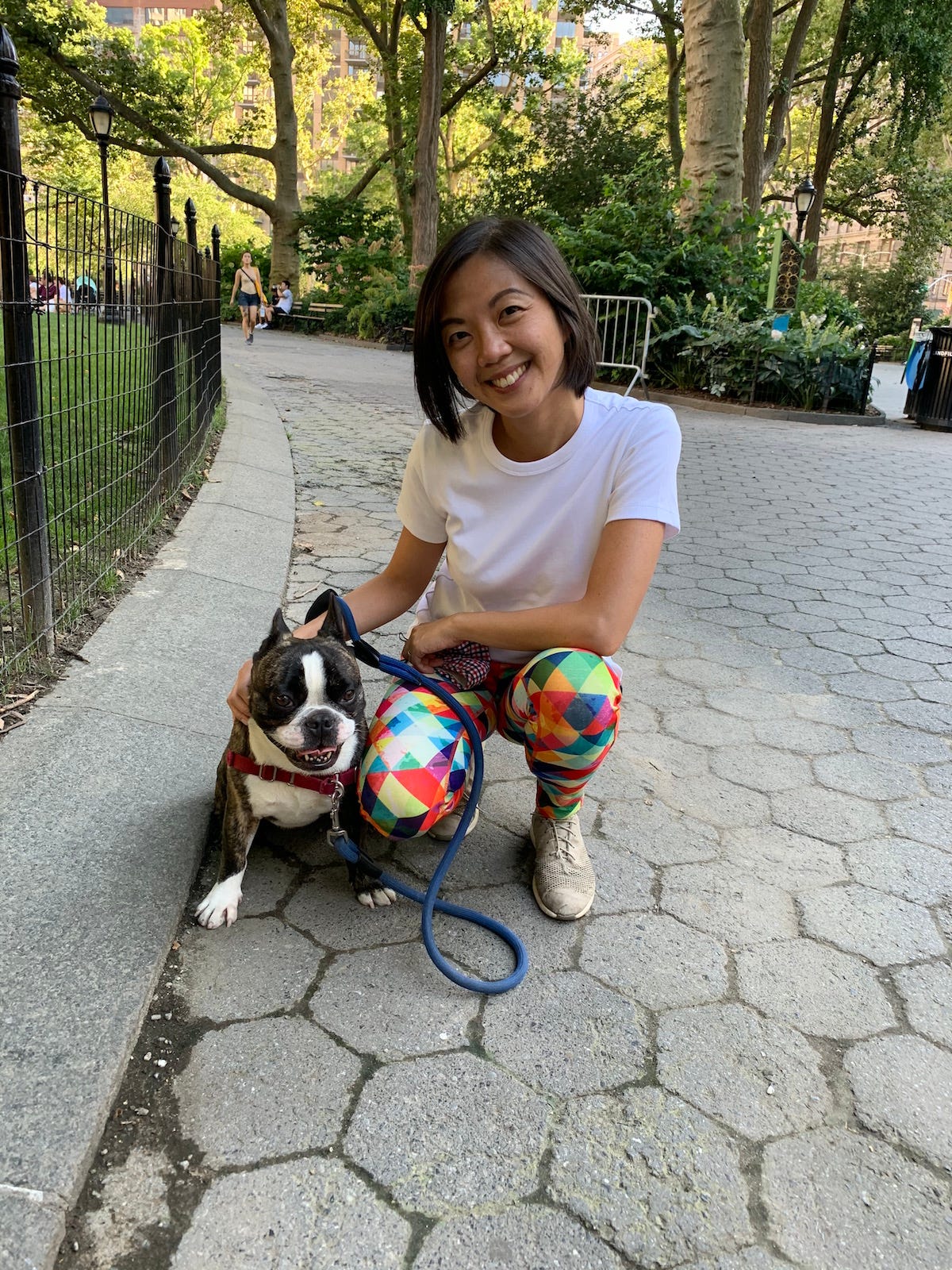 Apple MandyI learned to let go and be less controlling.

It’s been two weeks now since Watson and his owners permanently left New York for Los Angeles. Though I won’t be able to see him again, I’ll remember the experience forever.

My walks with Watson forced me to be more mindful. I’m someone who’s always on the go, and I get restless when I’m still, but the experience reminded me to pause for a moment and appreciate the little things in life: be it the flowers blooming, the squirrels hopping, or the sun shining.

It may seem like I moved to New York at the wrong time, but spending time with Watson ultimately helped me make a small shift in my lifestyle to slow down, take a breath, and pause every now and then. 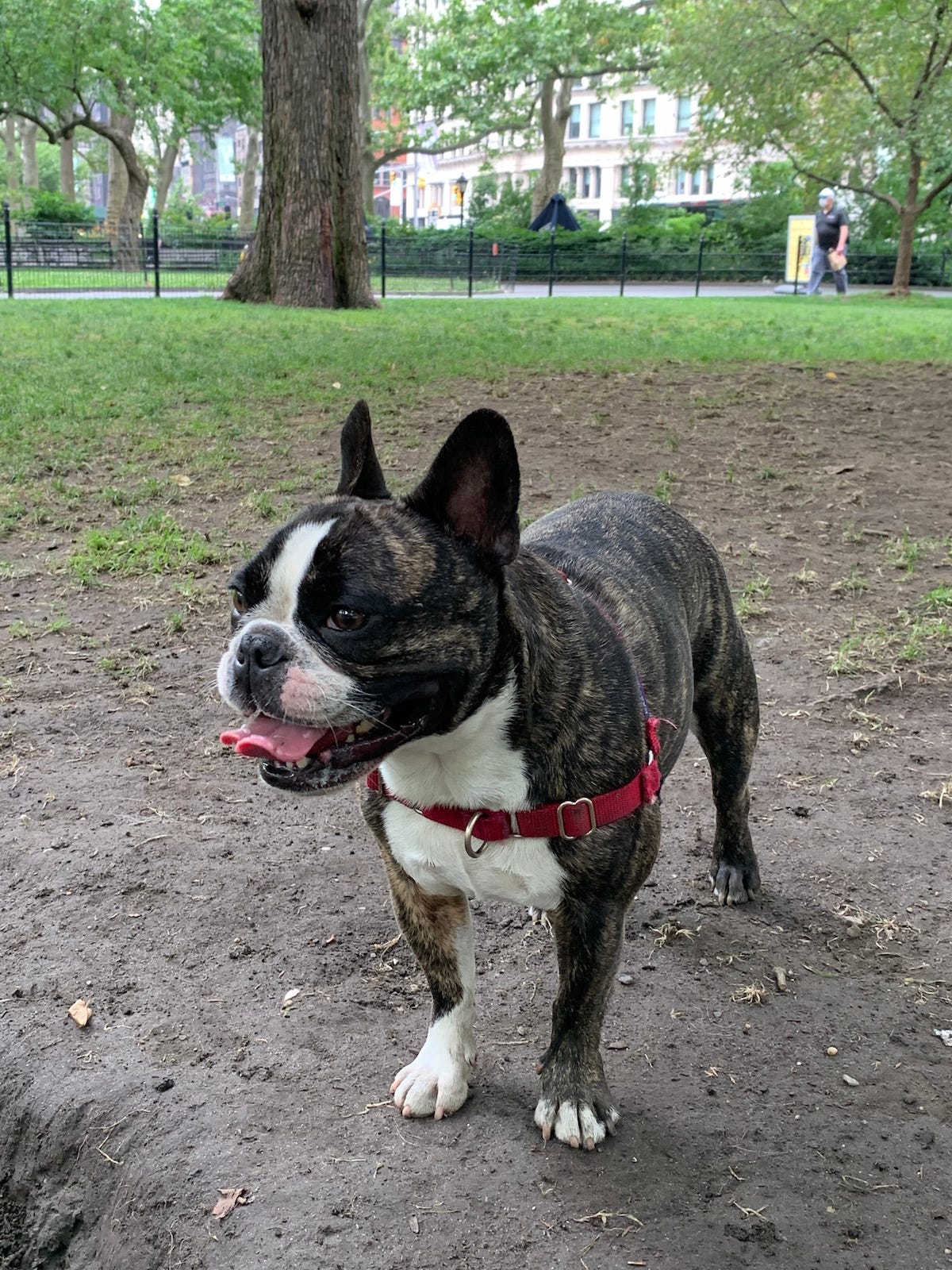 Apple MandyWatson liked to play with other dogs at Madison Square Park.

These hairless guinea pigs, known as ‘skinny pigs,’ are like having a mini hippo as a pet

There’s a TikTok trend of picking your cat up like a phone, but animal experts say it could be harmful

The Queen’s corgis have their own menu, and a former royal chef says Buckingham Palace was like ‘an a la carte restaurant’ for dogs