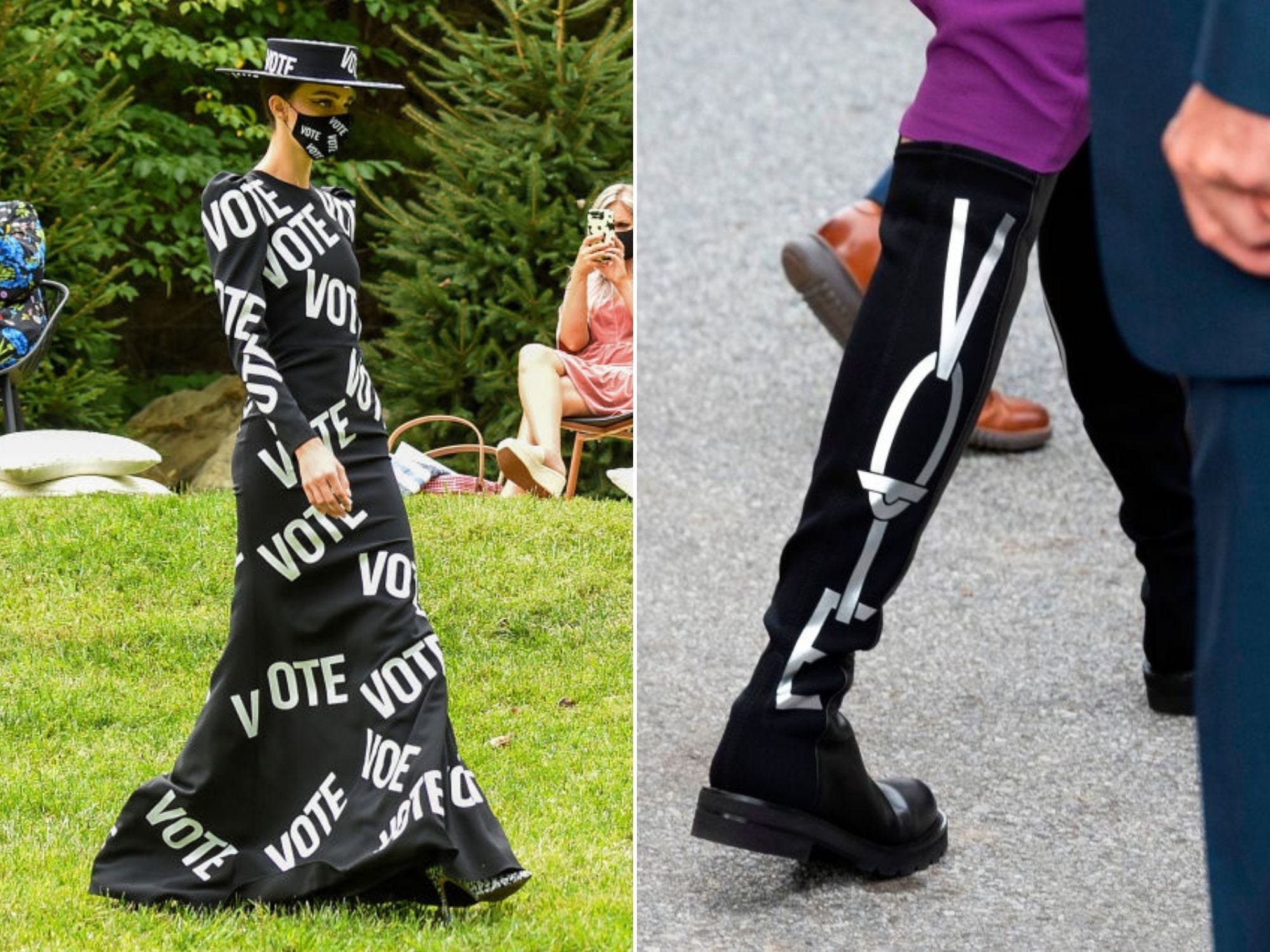 The fabric technique reminiscent of the 1970s had a resurgence starting in March and April when people found themselves amid stay-at-home orders and in search of a reminder of happier days â€” think childhood crafts or summer camp.

The tie-dye craze had its moment to shine, but another big fashion trend is about to take over, and it has everything to do with the 2020 presidential election.

As the calendar inches closer to November 3, designers are taking a literal approach to inspiring Americans to be civically engaged: by plastering the four-letter word across their garments and accessories.

But “VOTE”-emblazoned clothes aren’t just sitting idly on (virtual) shelves â€” customers are actively seeking out the styles. According to fashion intelligence brand Lyst, US fashion searches including the keyword “vote” have been increasing by 29% each week, as of September 16.

A recent example of a viral “VOTE”-emblazoned style was a charm necklace worn by former first lady Michelle Obama at the live-streamed Democratic National Convention on August 17. 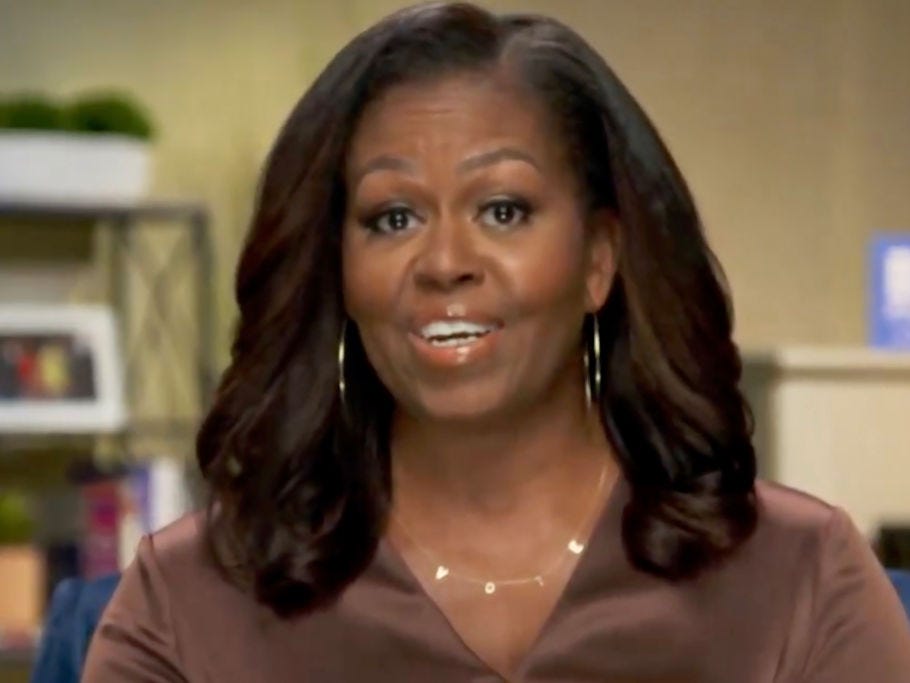 Obama wore a $US295 necklace that spelled out “vote” and was designed by Chari Cuthbert of Black-Chinese-owned brand ByChari.

“I had created a VOTE necklace for the last election and knew I was going to do it again,” Cuthbert said in a press release shared with Insider. “As we started our outreach, I was honoured when Michelle Obama’s stylist [Meredith Koop] asked for one and am thrilled she is wearing it!”

Cuthbert previously told Insider’s Celia Fernandez that the day after Obama was shown at the DNC wearing the charm necklace, the company had its best day in sales.

“This is the milestone moment. This is one that defined the company,” Cuthbert said of Obama wearing her necklace. “This is the most important moment.”

On September 14, Dr. Jill Biden, wife of Democratic presidential nominee Joe Biden, was photographed after voting in Delaware’s state primary wearing a pair of black boots with the word “vote” printed in sliver across the calf. 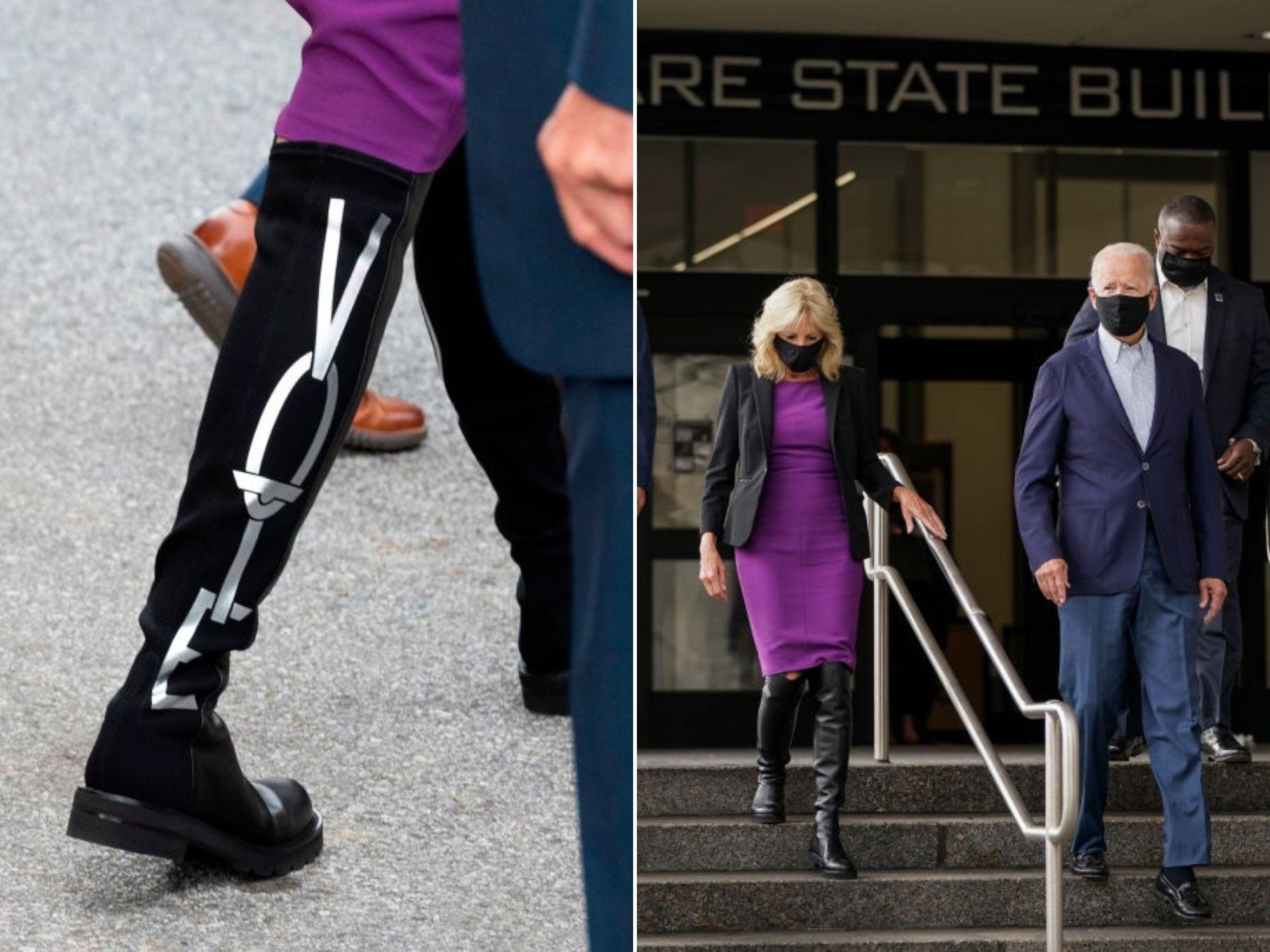 JIM WATSON/AFP via Getty Images; Drew Angerer/Getty ImagesStuart Weitzman ‘Vote’ boots worn by Jill Biden as she departs the state building after voting in the Delaware state primary in Wilmington, Delaware, on September 14.

The $US695 Stuart Weitzman boots â€” called the 5050 Vote Boot â€” are available with the word “vote” either in silver, like Jill Biden wore, or in black. The shoes were designed in partnership with the nonprofit I am a voter, and all proceeds from sales of the boots will benefit the organisation, according to the Stuart Weitzman website.

The Stuart Weitzman website stated on Saturday that most sizes of the shoes have sold out “due to overwhelming demand.”

In the 24 hours after Jill Biden was pictured in her statement-making boots, the webpage for the shoes received a 488% spike in page views, according to data from fashion search engine Lyst.

Representatives for Stuart Weitzman did not immediately respond to Insider’s request for comment when asked for further details about the item.

‘VOTE’ designs made an appearance at a rare runway show

Designer Christian Siriano of “Project Runway” fame hosted his own New York Fashion Week show in the backyard of his home in Westport, Connecticut, on September 17.

In the show, models sported a variety of “vote”-clad garments â€” from a floor-length gown covered in serif text, to coordinating hats and other accessories. 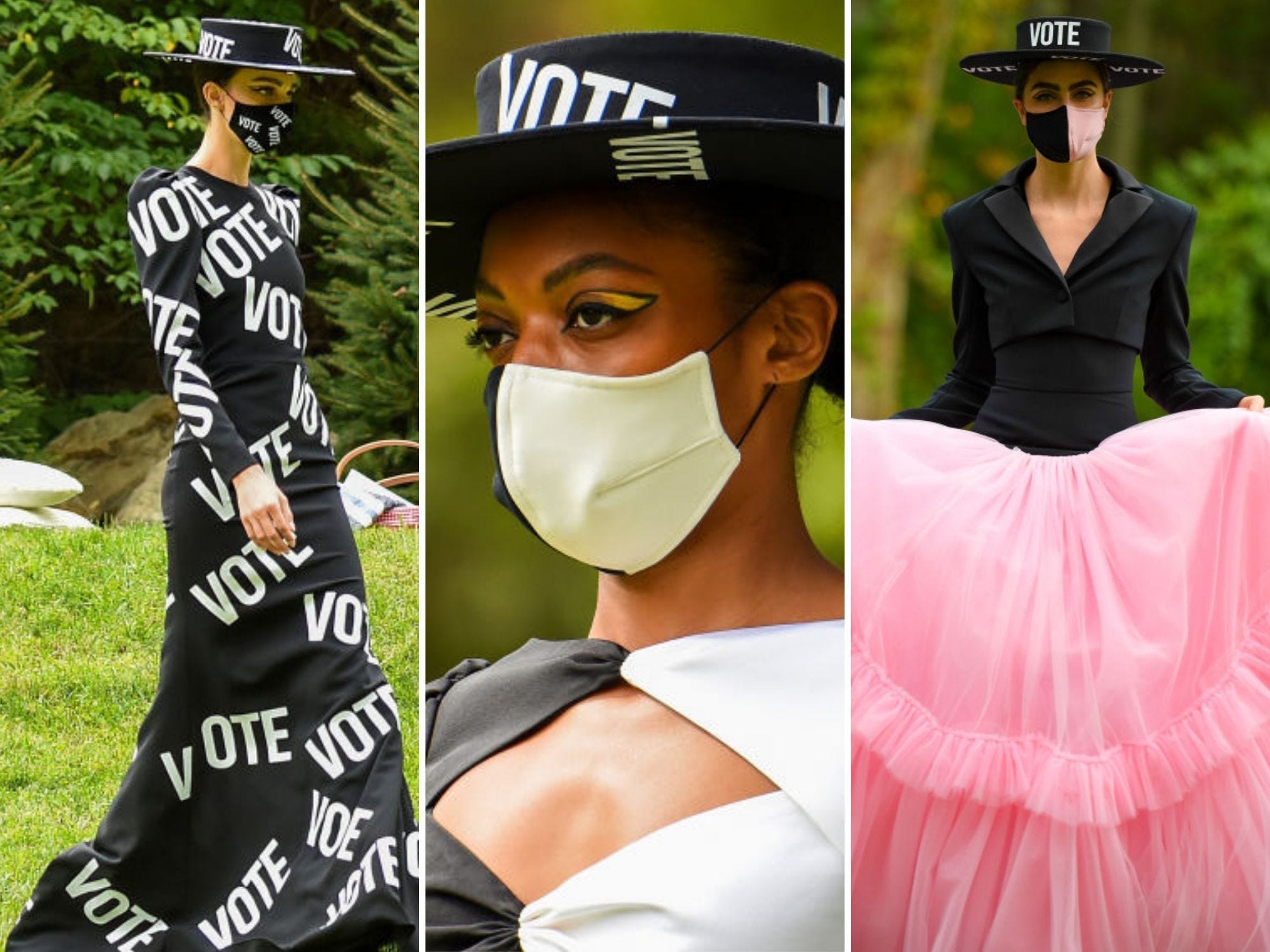 “As a designer our clothes are our voice. Yesterday we showed our collection with a message to VOTE VOTE VOTE!” Siriano wrote in an Instagram post of models wearing various “vote”-themed garments and matching face masks, which he’s selling on his website for $US35 at the time of writing.

On Saturday, Siriano said that his “VOTE”-centric outfits that he showed at his recent runway show are dedicated to Supreme Court Justice Ruth Bader Ginsburg, who died on Friday at age 87 after battling metastatic pancreatic cancer.

“These looks are for you Ruth,” Siriano wrote on Instagram, sharing a picture of the fashion show’s models and a separate picture of Ginsburg. “You will forever be our champion.”

Siriano summed it up best: “do not forget to VOTEEEE!”