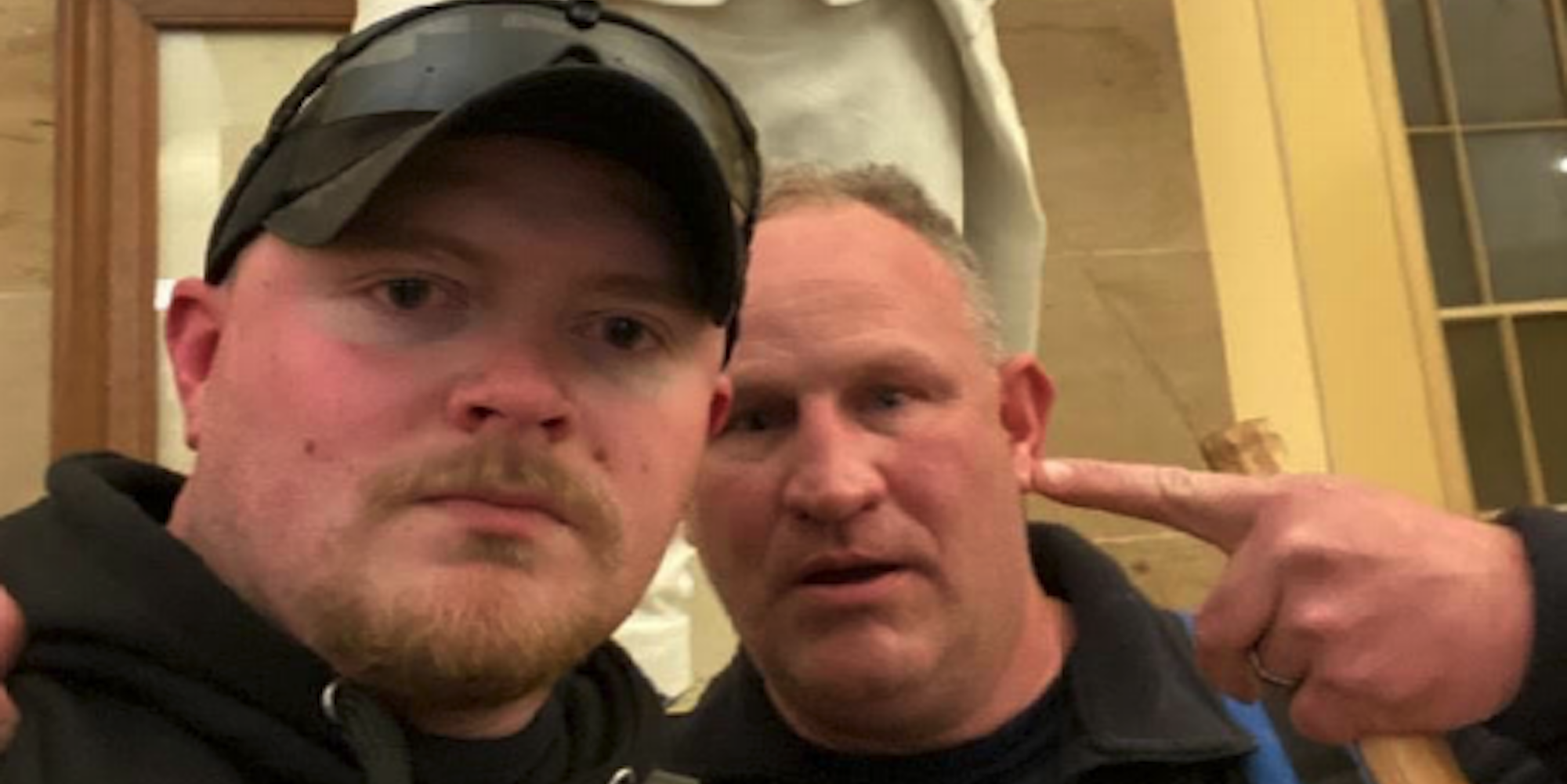 US Attorney’s Office, District of ColumbiaOfficers Jacob Fracker, left, and Thomas Robertson of the Rocky Mount Police Department in a selfie taken inside the Capitol.

Two Virginia police officers were arrested Tuesday and charged over last week’s Capitol breach after they took a selfie inside the Capitol and posted on social media that they had taken part in the attack on the government, authorities say.

Jacob Fracker, 29, and Thomas Robertson, 49, were arrested on misdemeanour counts of knowingly entering or remaining in any restricted building or grounds without lawful authority and one count of violent entry and disorderly conduct on Capitol grounds, according to a criminal complaint unsealed Wednesday.

Fracker is a K-9 officer with the Rocky Mount Police Department, and Robertson is his platoon sergeant, according to The Roanoke Times. Both men were off duty during the storming of the Capitol, the complaint said.

The officers are on administrative leave while town authorities review their actions at the Capitol, according to WDBJ. 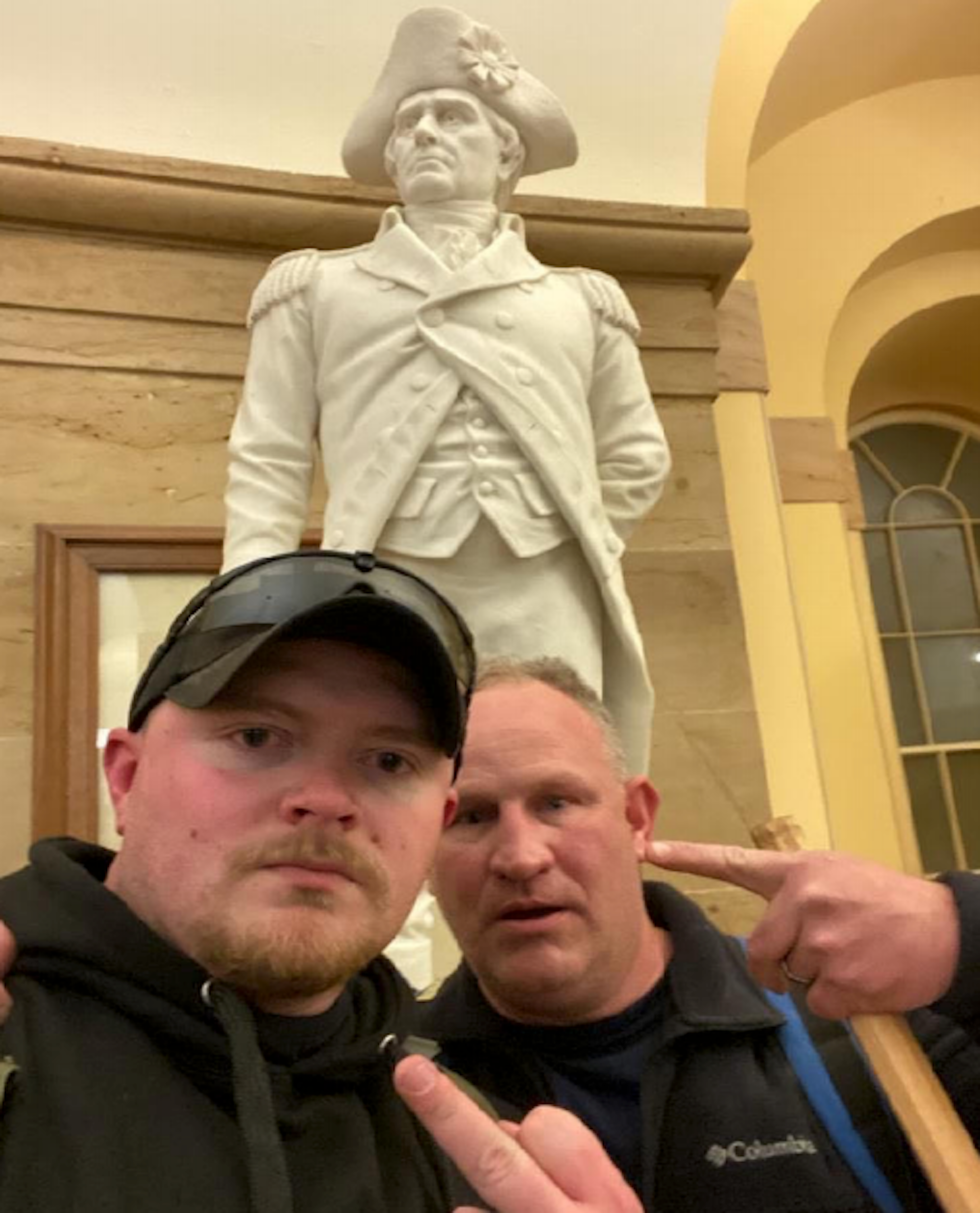 US Attorney’s Office, District of ColumbiaThe full image shows the two men posing in front of a statue of the Revolutionary War hero John Stark. Fracker can be seen raising his middle finger.

WDBJ previously reported that the town turned the two men in to federal authorities after realising their role in last week’s riot of President Donald Trump’s supporters.

Included in the criminal complaint is a selfie of the two officers at the Capitol and social-media posts from their accounts that describe participation in the riot.

The selfie shows the two men in front of the statue of the Revolutionary War hero John Stark, with Fracker giving the middle finger. Stark is known for coining the New Hampshire state motto, “Live Free or Die.”

Robertson posted on Instagram that he was “proud” of the photo because it showed he was “willing to put skin in the game,” according to the complaint. 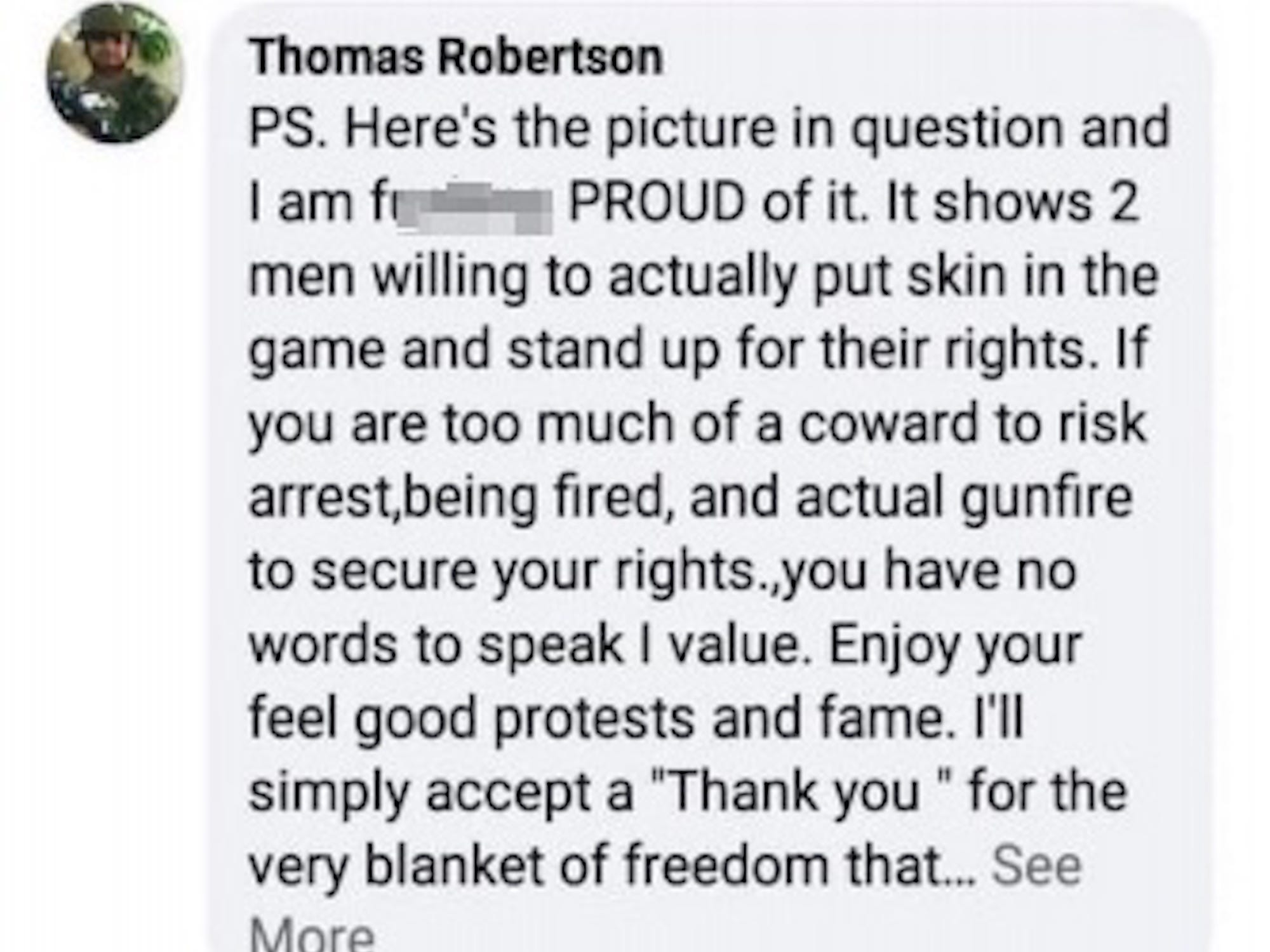 US Attorney’s Office, District of Columbia

The complaint says Robertson also posted on social media: “CNN and the Left are just mad because we actually attacked the government who is the problem and not some random small business… The right IN ONE DAY took the f***** U.S. Capitol. Keep poking us.”

The complaint also cited a since-deleted Facebook post in which it said Fracker alluded to participating in the breach: “Lol to anyone who’s possibly concerned about the picture of me going around…Sorry I hate freedom? …Not like I did anything illegal…y’all do what you feel you need to.” 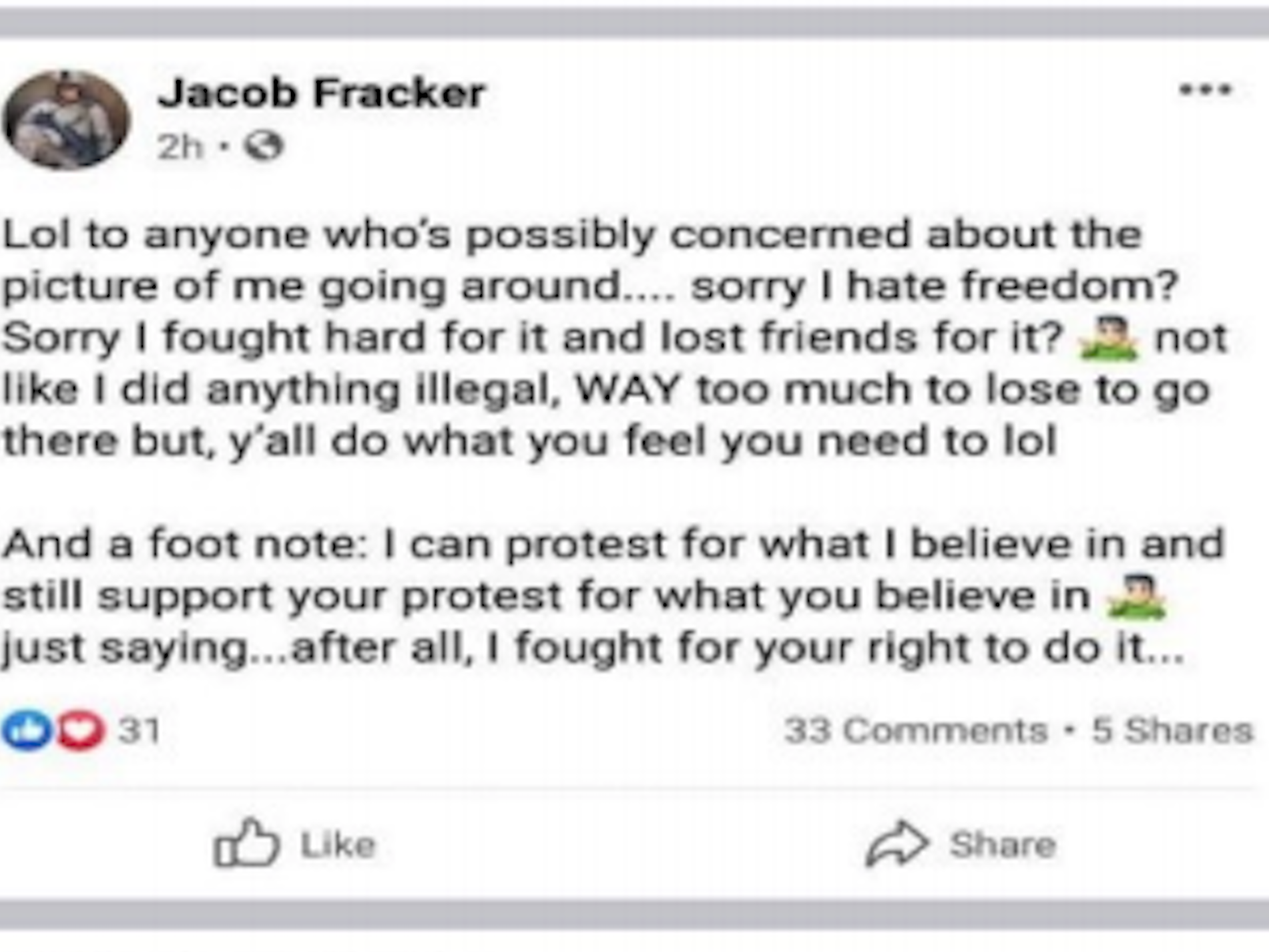 US Attorney’s Office, District of Columbia

The two men took part in a virtual hearing Wednesday, during which prosecutors said they would not seek jail time for the officers, according to WSLS.

Prosecutors did want Fracker and Robertson to wear GPS ankle bracelets while they were out on $US15,000 bond, which the judge said wasn’t necessary because the two men were police officers and military veterans, WSLS reported.

They have, however, been barred from going to Washington, DC; taking part in any demonstration or protest while out on bail; and were required to give up their firearms, according to WSLS.WDBJ reported that Robertson was told to turn in his passport and that Fracker didn’t have to because he didn’t have one.

In an interview with The Roanoke Times, Robertson said that he and Fracker didn’t do anything illegal and that they had been let into the Capitol by the Capitol Police, who he said gave them bottled water and told them to stay within cordoned areas. He said they did not witness â€” or take part in â€” any violence last week.

Fracker, an Afghanistan veteran, released a statement Tuesday, according to The Roanoke Times, saying his actions were an “expression of grief against what very many Americans would consider tyranny.”

Fracker and Robertson are two of many off-duty cops and members of the military who are being investigated in connection to last week’s breach.

Several US Capitol Police officers have been suspended over suspicions they welcomed some of the rioters into the Capitol. One of the “Stop the Steal” organisers also claimed three GOP congressmen helped him plan the storming of the Capitol.