Brendan McDermid/ReutersVirgin Galactic co-founder Sir Richard Branson, CEO George Whitesides, and Social Capital CEO Chamath Palihapitiya pose together outside of the New York Stock Exchange ahead of Virgin Galactic trading on October 28, 2019.
Shares of Virgin Galactic plummeted as much as 21% on Tuesday after the pre-revenue space tourism company failed to provide a schedule for its upcoming test flights in its first-quarter earnings report.

The company’s founder Richard Branson plans to be onboard an upcoming test flight, but a maintenance issue with its Eve mothership has led to uncertainty as to when the next test flight will happen.

“We will report back to the market next week with an update on schedule implications to our next flight,” Virgin Galactic president of space missions and safety Mike Moses said during the earnings conference call.

Time is ticking for the company as investors seek results amid a stock market environment in which high-flying growth stocks are being heavily sold. Virgin Galactic currently has $617 million in cash, and said it has about 600 customer reservations to fly into space.

Shares of Virgin Galactic are down 77% from its February high of about $62. Since then, insider sales have ramped up, with both Branson and its chairman, Chamath Palihapitiya, selling a bulk of their positions in the company.

Virgin Galactic shares are down 38% year-to-date. 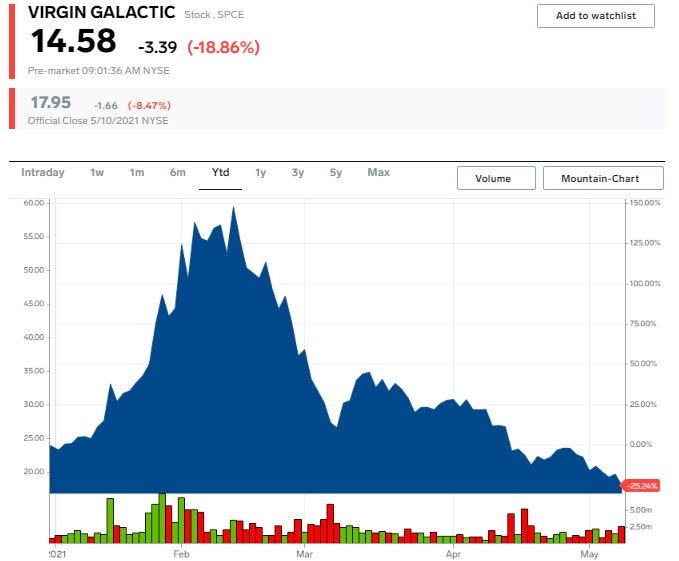