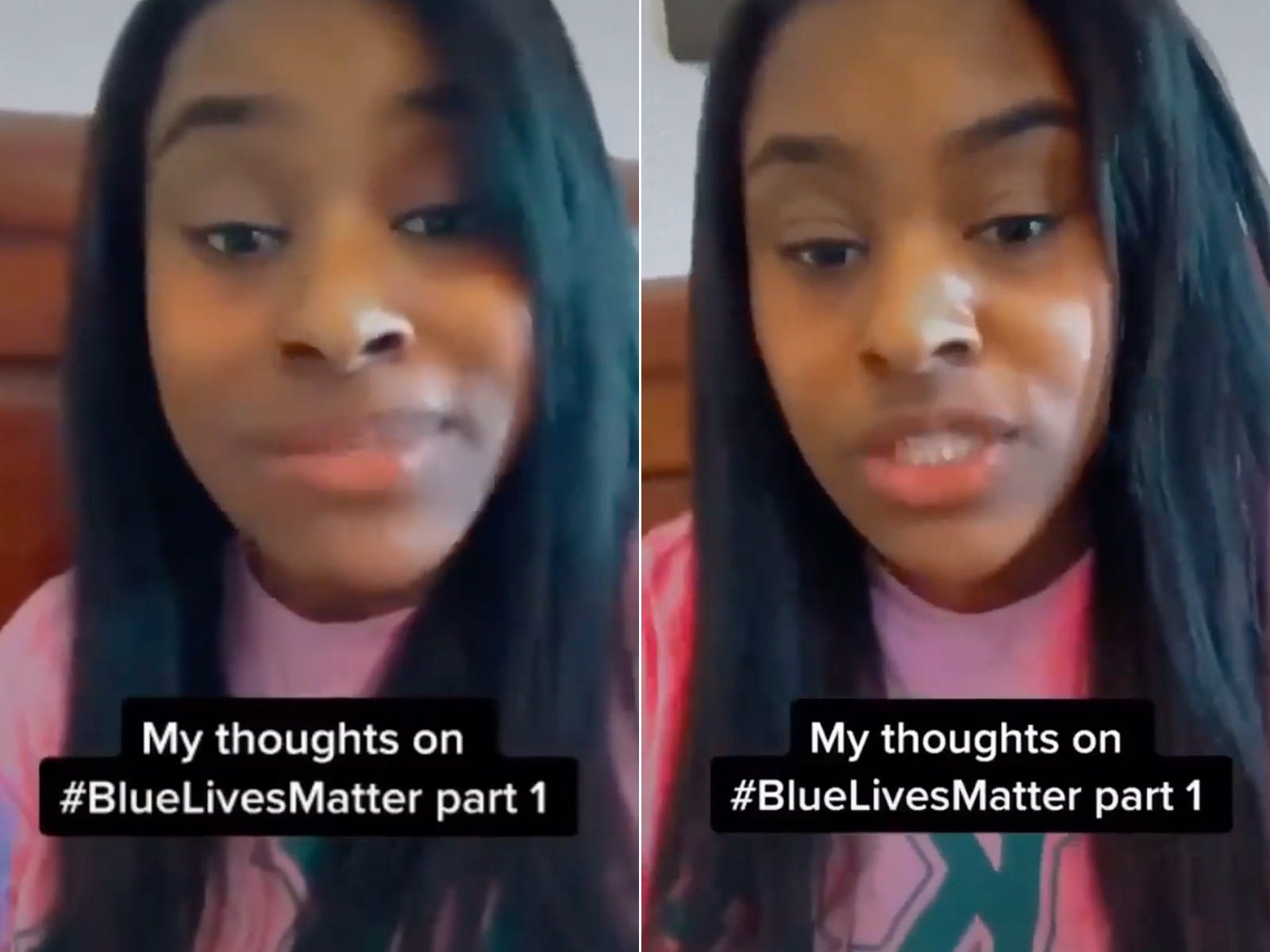 When George Floyd was killed in police custody on May 25, Gabrielle Pettway felt compelled to speak out against police brutality. The 23-year-old from Alabama, like many outraged social media users, decided to voice her concerns on TikTok – so she made a video explaining why she believes that ‘Blue Lives Matter’ rhetoric is damaging. (‘Blue Lives Matter’ is a countermovement to Black Lives Matter, centering police as victims rather than Black people).

The since-deleted clip resurfaced on Facebook this week and is receiving viral attention, as Pettway’s father, Mark Pettway, is the Sheriff of Jefferson County, Alabama.

In the video, Pettway said that despite her affiliation with law enforcement and her understanding of the dangers of the job, she took issue with the deluge of ‘Blue Lives Matter’ messaging following Floyd’s death.

“My dad is the sheriff of the largest county in the state of Alabama. It’s scary at times – we’ve gotten death threats before – but I’m still not gonna sit up here and say ‘Blue Lives Matter,'” she explained. “Because it’s undermining the racism and corruption built into the whole blue system.”

Pettway went on to encourage viewers with family in law enforcement to demand accountability from their loved ones who could play a role in ending police brutality.

“What kind of conversations are y’all having with your brothers, mums, dads – whoever’s in law enforcement – to hold them accountable and make sure they’re part of the solution and not the problem?” she said.

Pettway added that she sees a difference between the choice to enter a dangerous profession and the inherent danger of being Black in America.

“They might be risking their lives every time they go to work, but at the same time, they chose that. Black people are risking their lives just by being Black,” she said. “If you feel like there’s nothing wrong with saying ‘Blue Lives Matter,’ you’re privileged. It’s inconsiderate, it’s insensitive, it’s distasteful, and it’s racist.”

Her statements made waves with some members of law enforcement.

“To me, it’s just really disappointing that a daughter would say that when her dad has walked the streets, and faced the danger, and depended on his big brothers to support him and back him up,” David McAnally, a former investigator with the sheriff’s office,told WVTM.

Pettway told Insider that she initially made the video to signal to her friends and family that she was aware of rampant police brutality and wouldn’t stand for injustice.

While she deleted the original clip to protect her father from professional repercussions, she says the sudden attention on her video has reinforced her view and emboldened her to speak out.

“I realised that what I said wasn’t wrong – it made people uncomfortable, but what I said, I stand by it,” she said.

Pettway’s immediate family has supported her desire to speak out.

“We have discussed it and they have made it very clear that they have my back. My dad was like, ‘You are your own person. You’re allowed to express your opinion,’ and he’s gonna stand by me,” she said. “My family hasn’t tried to silence me. They have been really supportive of me and that I’m grateful for that.”

After Pettway’s video made its way to local news, she took to Facebook to stand by her beliefs.

“My position as the daughter of a sheriff has not made me blind to the racism within the criminal justice system, but rather magnified it,” she wrote in the post. “I can be proud of my dad’s accomplishments and still recognise that we have work to do.”

Ultimately, Pettway says she hopes viewers understand that demanding more from law enforcement does not negate her support for officers or her respect for the sacrifices of the job.

The Jefferson County Sheriff’s Office did not immediately respond to Insider’s request for comment.