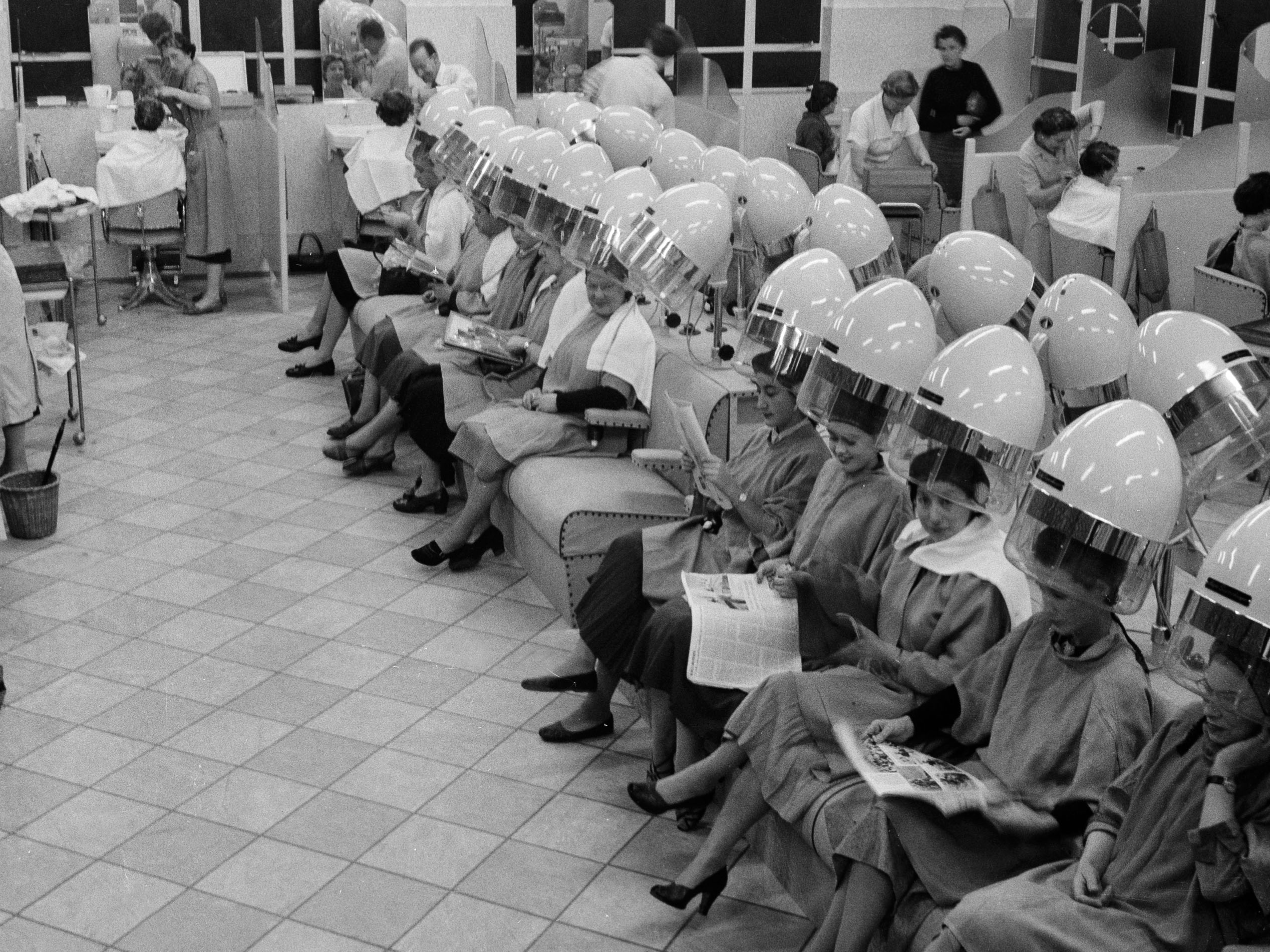 Popperfoto via Getty ImagesA beauty salon filled with women relaxing as they wait for their hair to dry.

In the postwar years, many working women returned to a homemaking role. Fuelled in part by the media, they were expected to always look the part of a glamorous housewife.

Oftentimes, only beauticians had the specialised hair products needed to create iconic Marilyn Monroe curls or Linda Darnell waves. So, women headed to the beauty salon, where they would spend hours getting styled and catching up on the latest neighbourhood news.

In the 1950s, the media idealised women as being happy homemakers.

caption
A woman shows off a fresh-baked pie to her husband.

Propaganda at the time depicted women as homemakers with “feminine hairdos and delicate dresses,” PBS reported. Beauty salons were the place to help them achieve that ideal.

Salons also became a welcoming spot for women to spend time together. It was the perfect place for women to catch up and take a breather from their daily routine.

The hairstyling profession grew as hair trends required specific techniques and products that often only beauticians had access to.

caption
A student sets the hair of another student in cosmetology class.

In cosmetology school, aspiring stylists would learn the popular hairdos of the time. Tight curls were especially popular in the 1950s, and women depended on their hairstylists to mimic looks coined by Elizabeth Taylor and Marilyn Monroe.

Women would spend hours getting their hair done, giving them the chance to exchange stories.

Going to the salon was the perfect excuse to get out of the house.

It was also the place where women could learn about new homemaking trends from the latest magazines.

caption
The salon was the perfect place to get up to speed on the latest trends.
source
Paul Walters Worldwide Photography Ltd./Heritage Images/Getty Images

Beauty salons became a hub for women to consume advertisements that reinforced their role in society.

While sitting under the hairdryer, women would read articles with homemaking advice from “Women’s Day,” or gardening ideas from “Better Homes and Gardens.”

But if you wanted to avoid magazines, you could also just smoke a cigarette and chat.

caption
A pair of women enjoy a complimentary drink and a smoke.

Salons took good care of you.

In some cases, salons even offered full meals.

caption
Enjoying a club sandwich while you wait for your hair to dry sounds like a dream.

The Pamper Club in New York City was both a beauty salon and a cafeteria. Women at the salon would relax at the snack bar while their hair set and dried.

Housewives could get their hair put in rollers and then pass the time over a club sandwich.

caption
A woman watches her stylist put in rollers.

Sadly there are no cafeterias in salons these days.

Even without snack bars, salons were inherently social. The hair-drying station placed women side by side under the rigid-roof hair dryer, the most common dryer of the ’50s.

caption
Back in the day, salons were big and took dozens of clients at a time.

The hard and rigid helmet covered the top of a woman’s head. It was known for having a higher wattage than at-home hair dryers, encouraging more women to visit beauty salons.

Hair dryers became more inventive, with each new design promising to cut down on drying time.

caption
The JetStream dryer was a complex contraption.

The JetStream 5-minute dryer brought hot air directly to the curlers, promising to cut drying time in half.

As time went on, hair curling and drying technology advanced.

In 1959, Rene Lelievre and Roger Lemoine patented the first electric curling iron, and hair curlers gradually became more mainstream and available to a wider consumer base.

But if one technique has stayed consistent through time, it is hair washing.

caption
The hair-washing station has had the same set up for decades.

The shampoo and conditioning process is pretty straightforward.

Hairstylists had their own perfectly styled hair, as well as matching uniforms.

Male hairdressers came to work dressed to impress, too.

It would be rare to see a hairstylist wearing a suit today.

Women of every age took pride in their hair.

At the Providence Rest Home for Aged Women in the Bronx, residents relaxed with a magazine and got their hair done.

By the ’60s, it was common for a woman to colour her hair.

caption
A hair salon in Los Angeles in 1968.

Women wanted to colour their hair and trim them to pixie cuts to resemble Twiggy, an icon of the decade.

Salons’ decor modernised and women were given more privacy.

Instead of sitting in a long line, here, each woman was given her own private station to relax in.

Men also kept up with trends, modelling hairstyles after popular British bands including The Kinks and The Beatles.

caption
Members of the British pop group The Kinks have their hair styled at a salon.

The Mod movement, a British subculture of the ’60s, provided a defining hair trend. Men began giving up their gel and grease from the ’50s and growing their hair out to achieve the mop-top made popular by British pop groups like The Kinks.

Even dogs were treated to a pampering session every now and then.

caption
This good boy also wanted to look like a movie star.

At George Constantinides’ hairdressing salon in London, this dog’s fur was set into curlers.