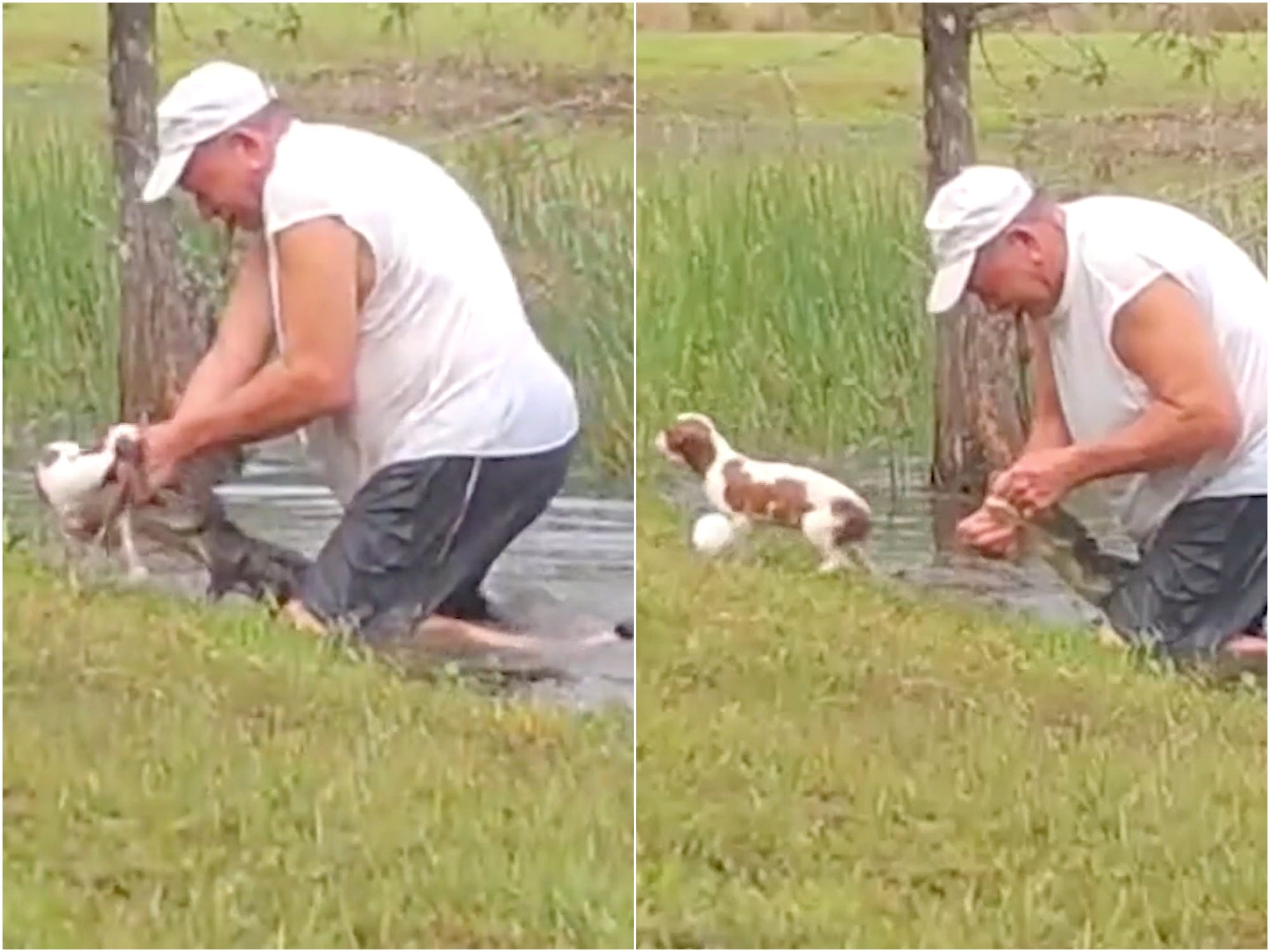 Florida Wildlife Federation/fSTOP FoundationRichard Wilbanks rescuing the puppy Gunner from the jaws of an alligator.

A retired man from Florida rescued his puppy from the jaws of an alligator in an incident captured on camera.

Richard Wilbanks, 74, said instinct took over after his 3-month-old Cavalier King Charles spaniel, Gunner, was snatched by an alligator in October.

The incident, which took place in Wilbanks’ backyard pond in Estero, was recorded on a surveillance camera as part of a partnership between the Florida Wildlife Federation and the fSTOP Foundation. The project is called Sharing the Landscape, and Wilbanks is one of the homeowners participating, FWF told Insider.

The dramatic footage shows Wilbanks waist-deep in the water, prying open the alligator’s jaws so Gunner can run free. It was filmed at the end of October but was only just discovered, Meredith Budd, the Florida Wildlife Federation regional policy director, told Insider.

“We were just out walking by the pond and it came out of the water like a missile,” Wilbanks told CNN. “I never thought an alligator could be that fast. It was so quick. I just automatically jumped into the water.”

Opening the alligator’s mouth was “extremely hard,” Wilbanks said, adding that his hands were left “chewed up.” He went to the doctor for a tetanus shot afterward.

Gunner was also taken to see a vet after the incident â€” he was left with one puncture wound in his belly but is fine otherwise.

“They’re like children to us, so there was no second thought whatsoever,” Wilbanks told WINK News.

The cameras that captured the incident are set up to monitor mainly bobcats and deer, to help people understand and appreciate wildlife better.

“We live in beautiful southwest Florida, and the wildlife is part of what makes this region so unique,” Budd told Insider. “And this project end goal is to develop a tool that can help to educate people about living with wildlife and hopefully reduce the likelihood of conflicts like this one.”

She continued: “I’ve spoken with the homeowners and after this encounter, they are still just as passionate about wildlife and still have a great appreciation for the beauty of their surroundings. I also think they have a deeper respect for the wildlife that share the area around their backyard and â€” hopefully â€” their pup will be leashed while exploring back there from now on.”

Wilbanks agrees that alligators are a part of nature, and he says he will indeed be keeping Gunner on a leash and well back from the water’s edge from now on.

“Our pets, they’re just like family to us,” he said.

The Florida Fish and Wildlife Conservation Commission recommends that care be taken with small dogs and cats, which are about the same size as alligators’ natural prey.