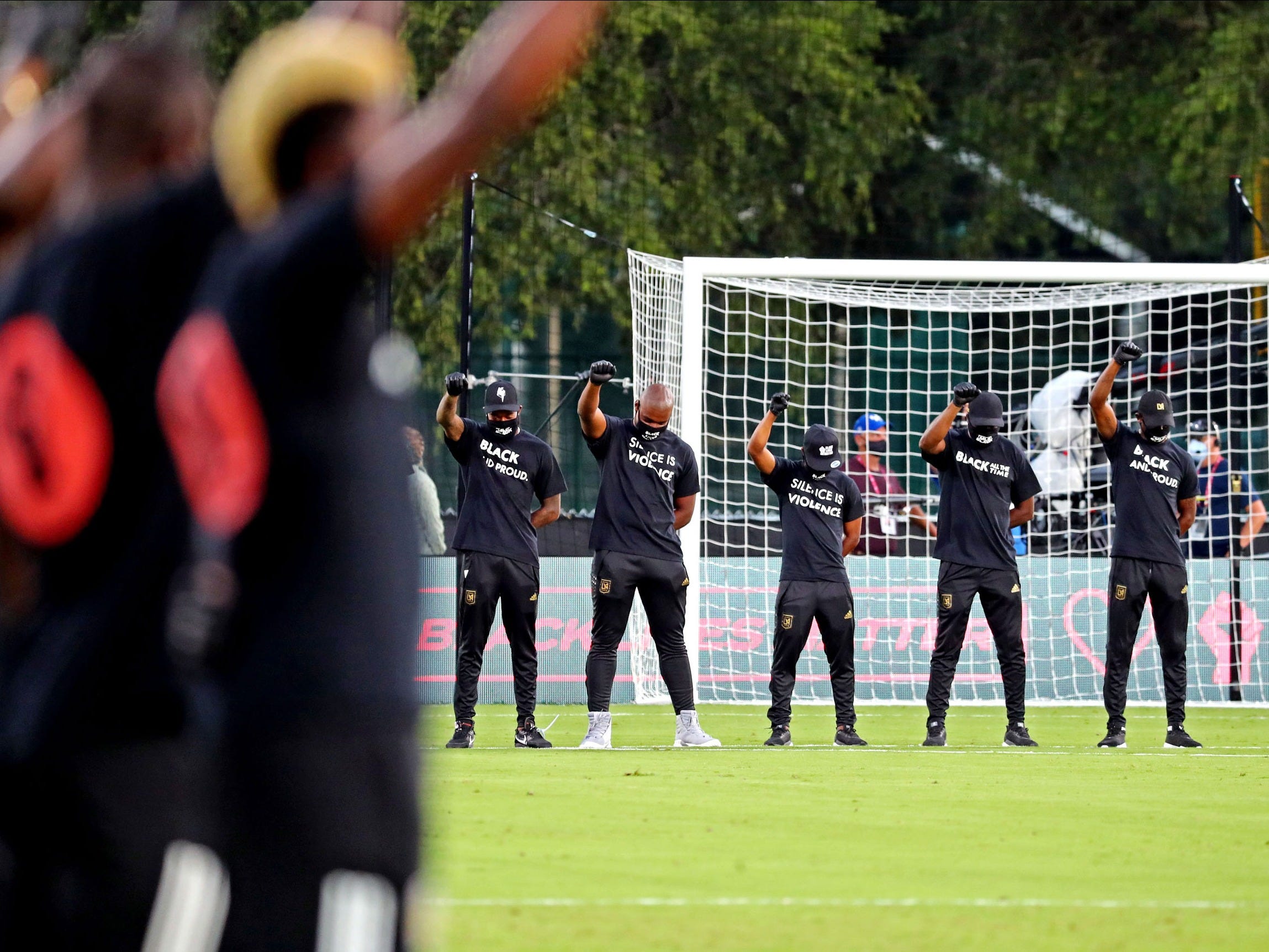 MLS players made a statement ahead of the league’s first match back from the COVID-19 pandemic on Wednesday night, with players from teams across the league standing together on the pitch to raise a fist in solidarity with Black Lives Matter and the ongoing struggle for racial equality.

The demonstration was organised by the league’s Black Players for Change, an organisation of Black players from across the league aiming to bring more inclusion to the league.

First, Inter Miami CF and Orlando City SC filed onto the field and took a knee around the centre circle. They were followed by players from across the league, who donned black gloves, black face masks, and black shirts with statements including “Black and Proud” and “Silence is Violence” written across them.

After surrounding the pitch, players on the outer rim raised their fists one by one through an extended moment of silence, creating a powerful visual ahead of the official kick-off of the MLS is Back tournament.

Once the demonstration was completed, players removed their masks and took to the field. At the opening whistle, players from both sides once again took a knee for another moment of silence, echoing the ongoing demonstrations that have been present in European soccer and the NWSL since their seasons have resumed.

At halftime, Justin Morrow of Toronto FC, who serves as Executive Director of Black Players for Change, joined the ESPN broadcast team to further discuss the protest that had been organised to start the tournament.

“What you just saw was a moment of solidarity,” Morrow said. “Standing up with our brothers and sisters fighting the fight for racial equality and human rights.”

Morrow said that he and other athletes in the league had been inspired in part by the action they had seen taken by other leagues across the country.

“This was a chance for us to take our place with them, stand up to racial inequality, fight that battle, and make sure that our voices in Major League Soccer are heard. Everything that you saw tonight came from us. When we first organised as a group, we talked about a protest because in Orlando it gave us a unique opportunity to all be together. And so what you see tonight was a special moment that was driven by the players, and Major League Soccer helped collaborate with us to make that happen.”

The MLS is Back tournament will run through July and conclude with a championship match on August 11.

Christian Pulisic has been the English Premier League’s best player since it restarted. Here’s why.

Insider’s team by team guide to the MLS is Back Tournament: A debut season for Beckham’s Inter Miami, a French icon in Canada, and the absence of the league’s best player