A UFC fighter used his victory speech to ask Miley Cyrus for a Valentine's day date, and she responded 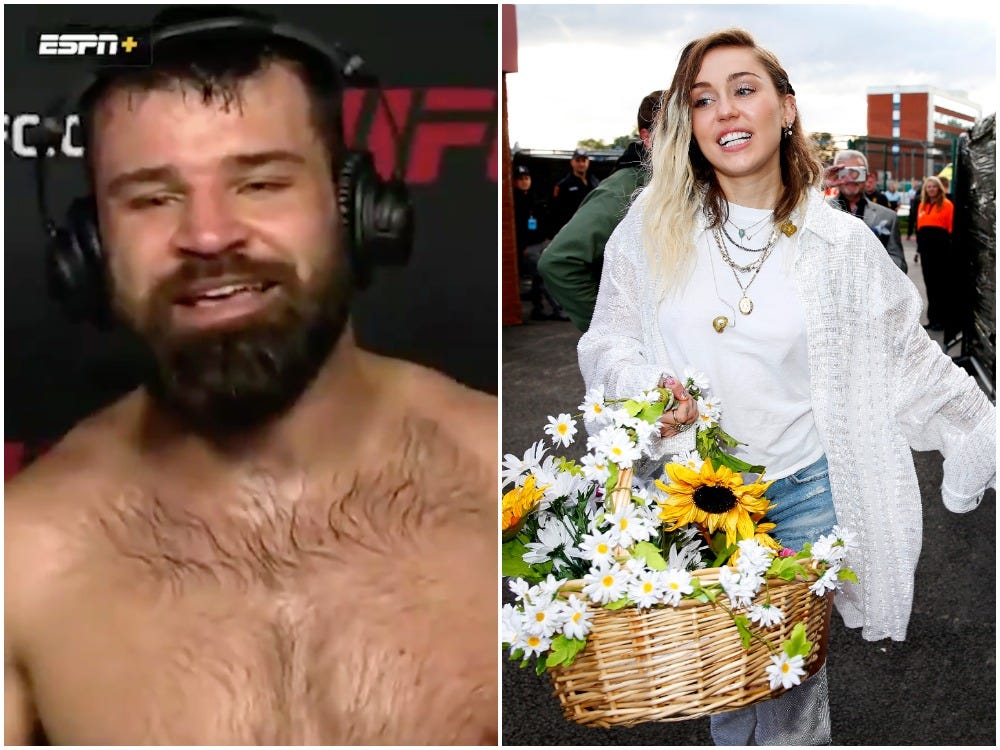 A UFC fighter used his victory speech to ask Miley Cyrus for a Valentine date, and she responded.

Julian Marquez, 30, submitted Maki Pitolo in a wild, middleweight match during the main card of the behind-closed-doors UFC 258 event Saturday at the UFC Apex in Las Vegas.

The American fighter came-from-behind after arguably surrendering the opening two rounds, making Pitolo tap to an anaconda choke in the third.

The performance was so impressive that the UFC rewarded Marquez with a cash bonus after the bout.

But rather than use the platform of his post-fight victory speech on ESPN to challenge other athletes in the 185-pound division, Marquez had a message for the singer, actress, and former teen idol Cyrus, 28.

“I’ve been waiting 31 months to get on this damned mic,” Marquez said, after his first bout in almost three years.

“And to call these people out right now â€¦ this is my time to shine. So, Miley Cyrus â€” will you be my Valentine’s?”

"Miley Cyrus, will you be my Valentine?"@JMarquezMMA used his mic time for an unconventional callout ???? #UFC258 pic.twitter.com/lWdwMRpoNS

It did not take long before Cyrus responded on Twitter.

“Shave an MC into your chest hair and I am yours,” she said. “Happy VDay and Congrats my love!”

Shave an MC into your chest hair and I am YOURS ❤️ Happy VDay and Congrats my love!

By the looks of things, though, the biggest win may be on the horizon.