Video from a Portland protest shows mums in yellow singing a haunting lullaby: 'Hands up, please don't shoot me' 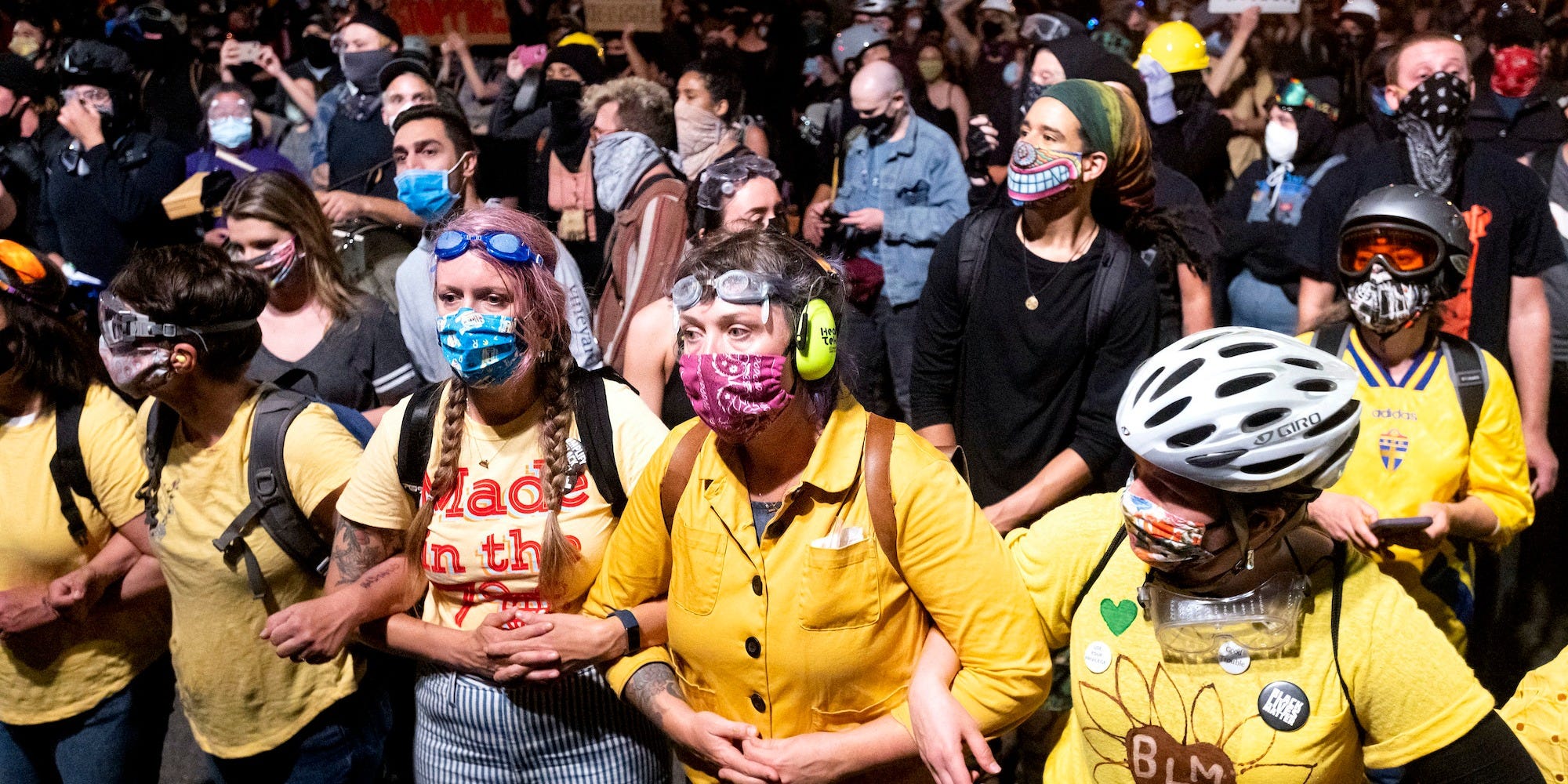 Thousands of people, including a group of mums, gathered in front of the Justice Centre in Portland, Oregon, on Monday night as protests in the city continued.

Video captured by a freelance reporter, Sergio Olmos, showed the protesters – flanked by the mums in yellow – singing a haunting song to the tune of a lullaby: “Hands up, please don’t shoot me.”

The videos show the women making a human shield around protesters as they locked arms with one another and sang.

At one point the crowd started singing: “If you matter and you know it, clap your hands,” to which loud and coordinated clapping could be heard.

The protest crowds in Portland continue to grow in response to the arrival of the feds.

There are probably about 2,000 people here right now in front of the Justice Center, with moms in yellow lined up in front, stretching across a whole block. pic.twitter.com/oCuO7Lx7pP

According to CNN, protests have been going on in the city for more than 50 days, and while most have been peaceful, according to the Associated Press, small groups of protesters have in some cases set fire to police precincts, smashing windows, and clashing violently with the local police. Officers, including federal officers, have also used tear gas, impact munitions, and other violent tactics, according to Oregon Public Broadcasting.

Federal agents from the Department of Homeland Security were sent to Portland by President Donald Trump, and local and state officials have been critical of their presence in the city, CNN reported.

The AP reported that in court documents tied to a lawsuit against the presence of federal agents, the Oregon attorney general, Ellen Rosenblum, said unidentifiable federal officers arrested people on the street with no probable cause and took them away in unmarked cars.

“They are sharply escalating the situation. Their presence here is actually leading to more violence and more vandalism. And it’s not helping the situation at all,” Mayor Ted Wheeler said on CNN’s “State of the Union.”

“They’re not wanted here. We haven’t asked them here,” Wheeler said. “In fact, we want them to leave.”

CNN reported that the women first banded together Saturday night.

Bev Barnum, the founder of the Wall of Mums group, told CNN that after she saw videos from the protests she knew she wanted to help. Barnum and about 70 other mums over the weekend surrounded a federal courthouse downtown shouting: “Mums are here! Feds stay clear!”

The women held up signs that said “Angry mama bear BLM” and “Mums are pissed.”

On Saturday, the group wore all white to be nonconfrontational and bike helmets for safety.

“We could tell by their body language,” she added. “There were two federal officers in front of us that seemed to say: ‘We don’t want to shoot y’all.'”

Jesus Christ feds came out of the courthouse in Portland and fired a flash bang at the moms against police brutality. At least one of these mothers is pregnant.

Despite, the women’s efforts to be nonconfrontational, federal agents used flash-bang devices, batons, and tear gas to disperse the crowd at about 10:45 p.m. local time, and the group of mums broke up after some of them were exposed to the tear gas.

On Monday, videos show the group donning yellow, as well as the bike helmets.

On Sunday night, 200 mums joined to lock hands and form a wall around protesters, and by Monday night thousands of protesters had gathered as the women sang and chanted.

“We’ll stop when there is no protester that needs our protection,” Barnum told CNN. “We get thanks every which way. But we’re not doing it for the thanks. We’re doing it to protect human rights.”