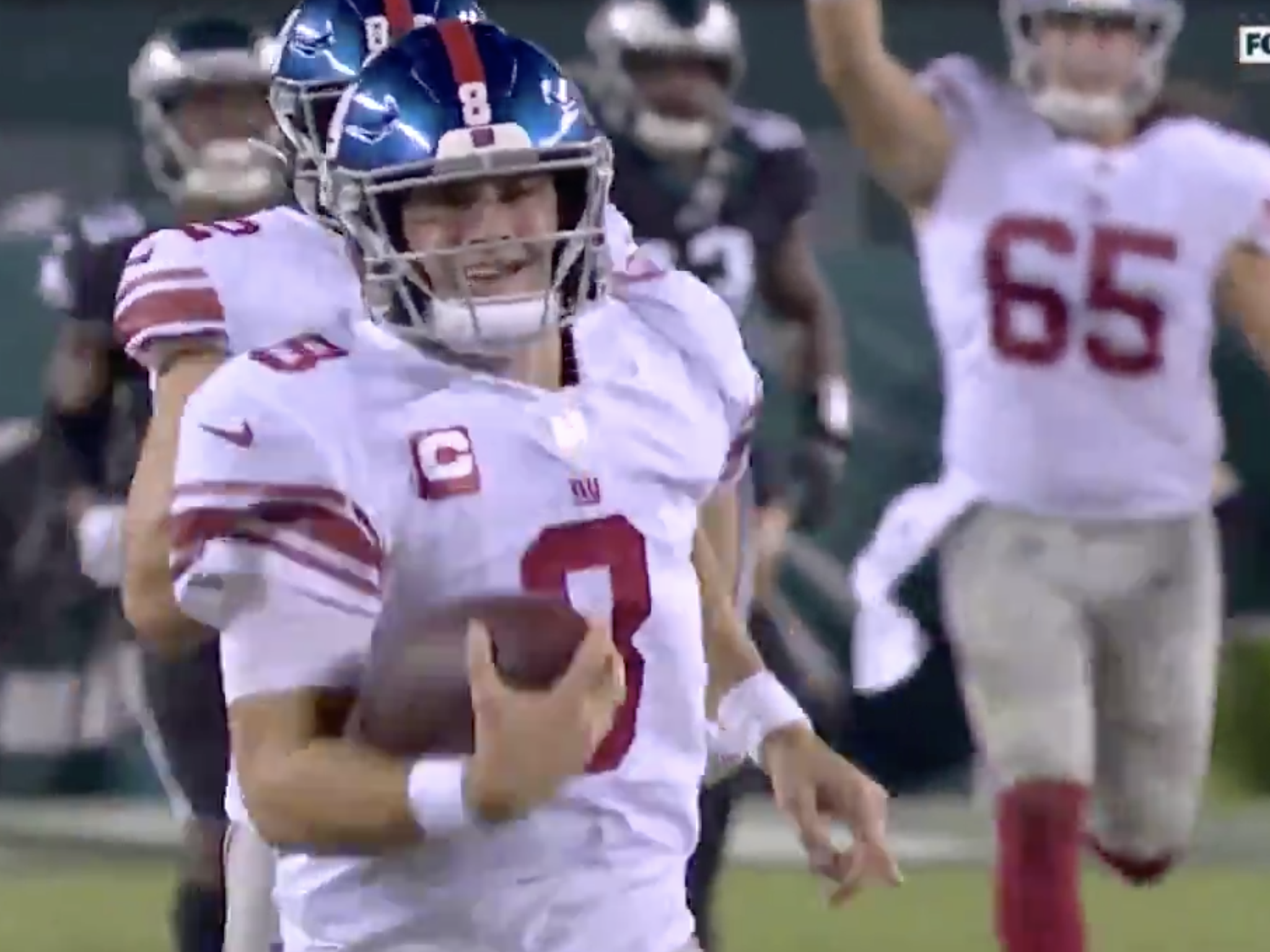 The New York Giants offence was in need of a spark on Thursday night, and quarterback Daniel Jones was there to provide it. Well, almost.

Trailing the Eagles 10-7 in the third quarter, the Giants had failed to get a first down on four straight drives, and needed something special to jumpstart the offence.

Offensive coordinator Jason Garrett dialed up a zone-read for Jones, and it worked to perfection.

At the snap, Jones held the ball out for running back Wayne Gallman, but kept his eyes up on the Eagles defence. After seeing the defence collapse to the centre of the field, Jones pulled the ball out to run it himself. 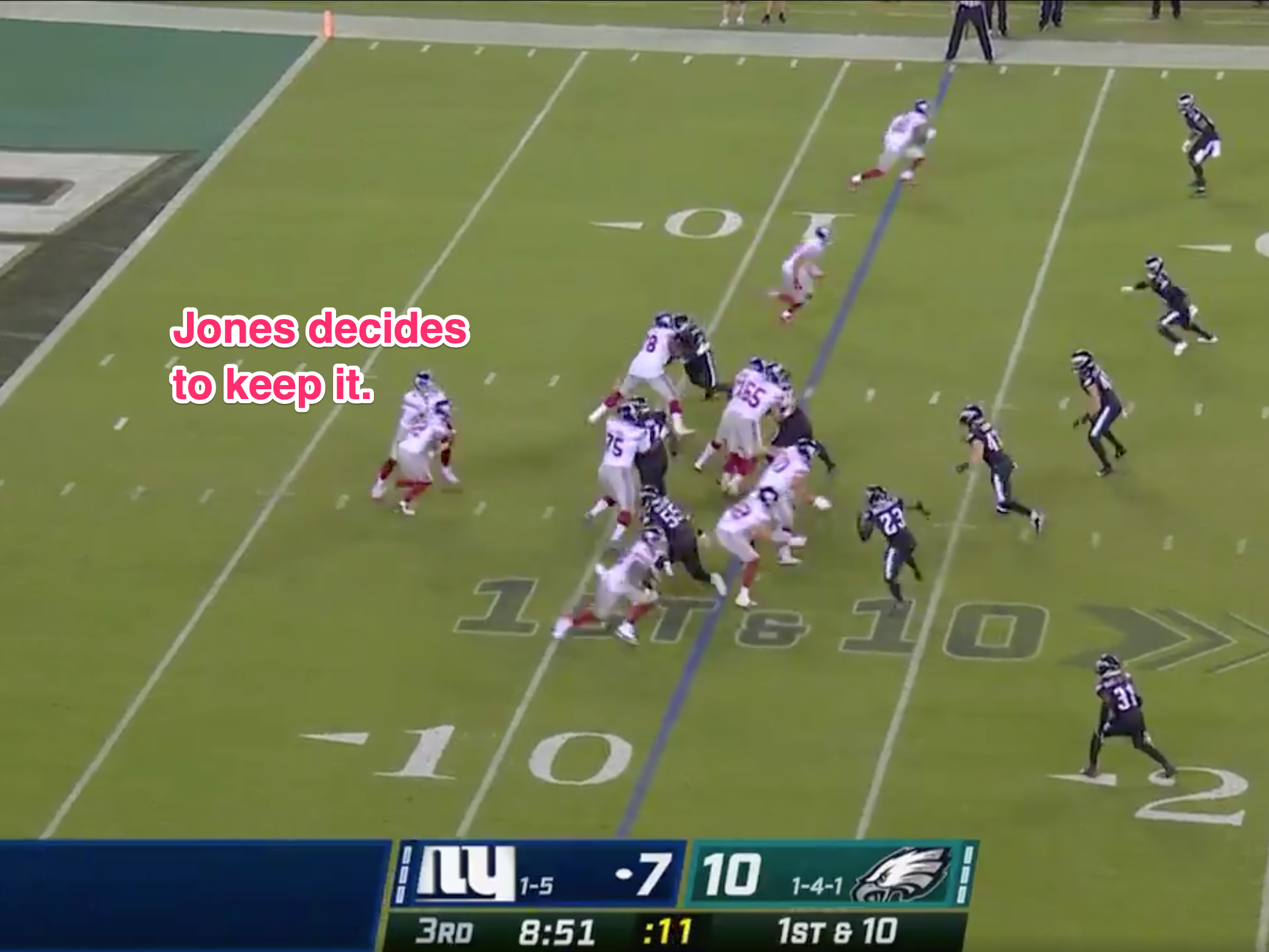 FOXDaniel Jones made the right read.

It was the right read! Jones found himself all alone as the seas parted and sent him upfield. A key, downfield block from tight end turned the big play into a huge one. There was nothing standing between Jones and the longest rushing touchdown of his career. 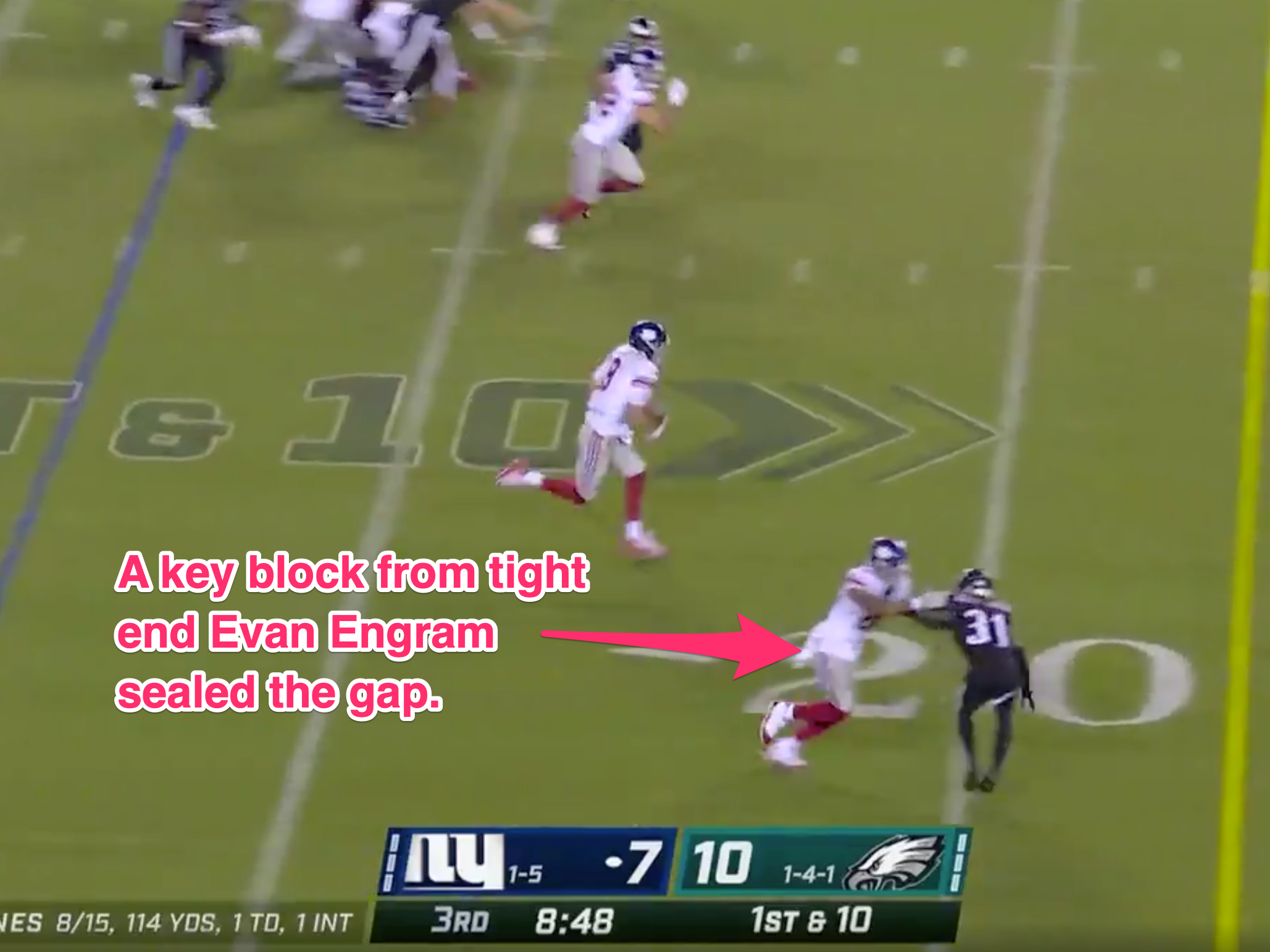 FOXHe got a key block.

Unfortunately, Jones’ legs couldn’t keep up with him, and he began to stumble around the Eagles’ 20-yard line. The only man that could stop Daniel Jones… was Daniel Jones. 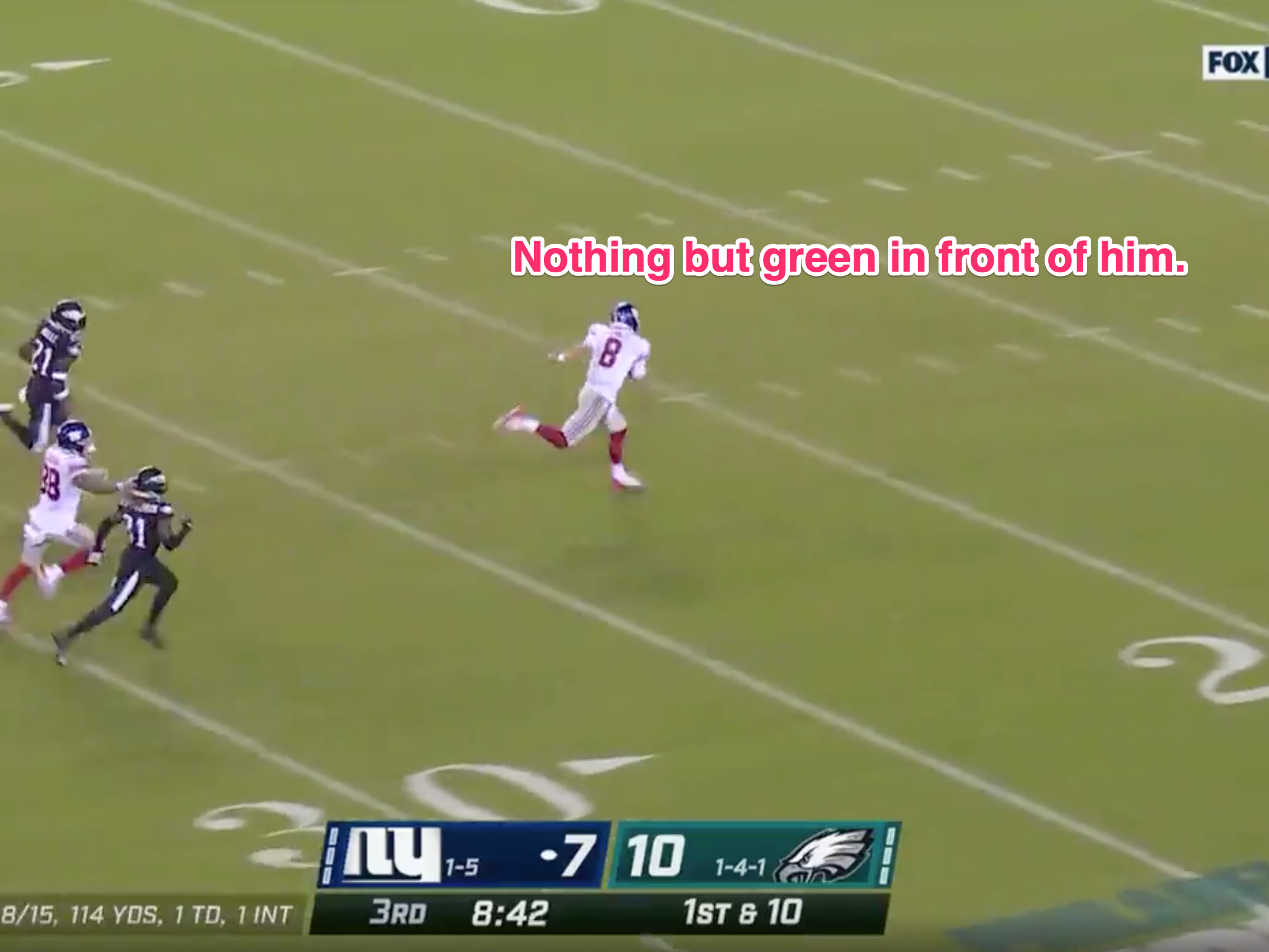 FOXThere was nothing stopping him!

Jones crashed to the ground just inside the 10 and was finally touched down, bringing the play to its end. 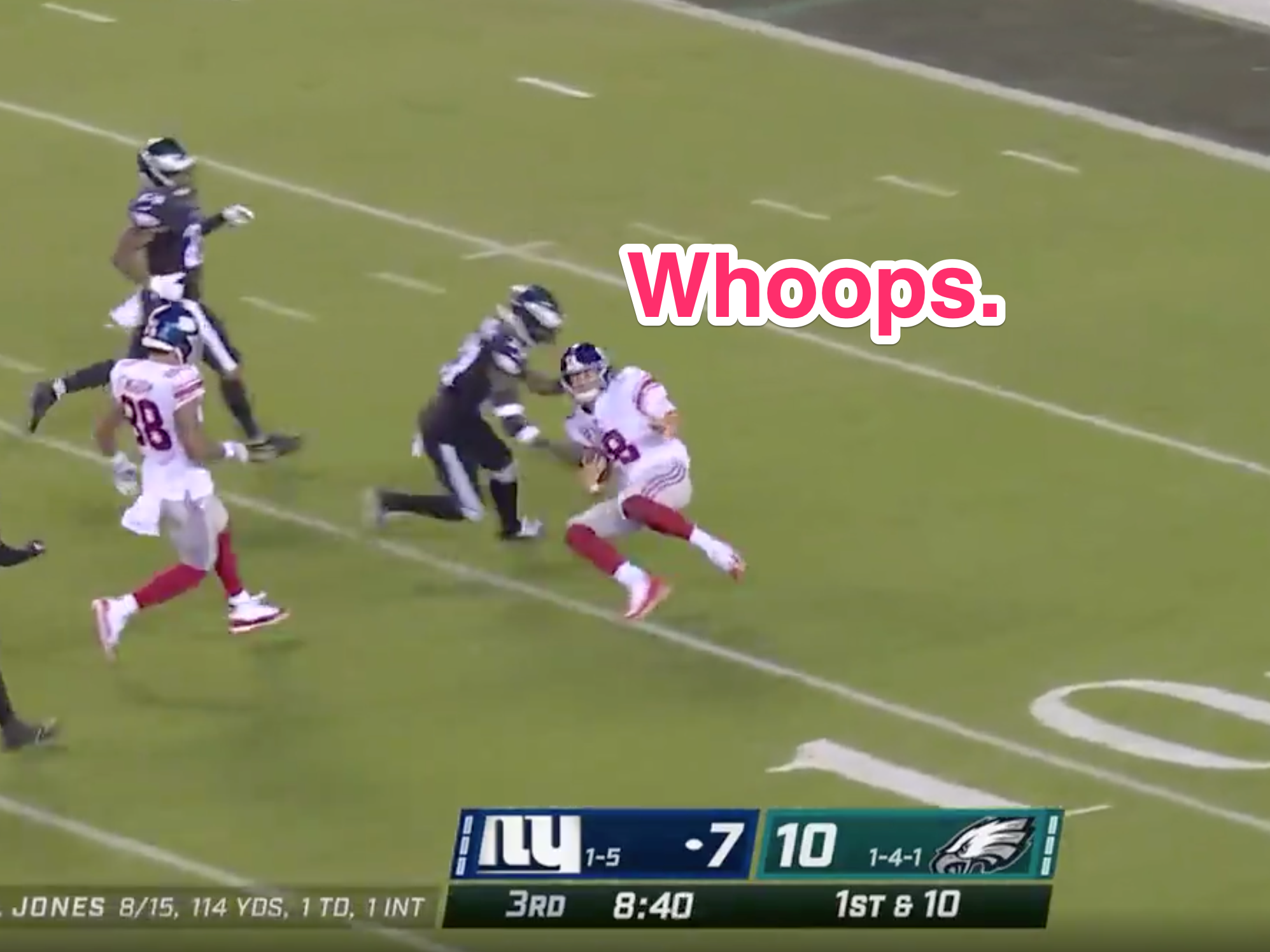 It was a play that Jones will never forget, though one that he surely wishes he had another shot at ending with an exclamation point.

Daniel Jones when he’s about to score: pic.twitter.com/Ywj0mj4tfg

Jones’ own teammates couldn’t help from laughing at their quarterback’s misfortune.

Daniel Jones’ teammates got a good laugh on the sidelines ???? pic.twitter.com/Pgs1QLeYvm

But Jones did some sympathy from fellow quarterback Patrick Mahomes, who admitted that he wouldn’t have fared much better than Jones did.

For the Giants, Jones’ stumble ultimately didn’t matter, as New York would go on to punch in the touchdown just a few plays later.

Still, it’s not every day you see a professional athlete trip over himself on his way to glory.