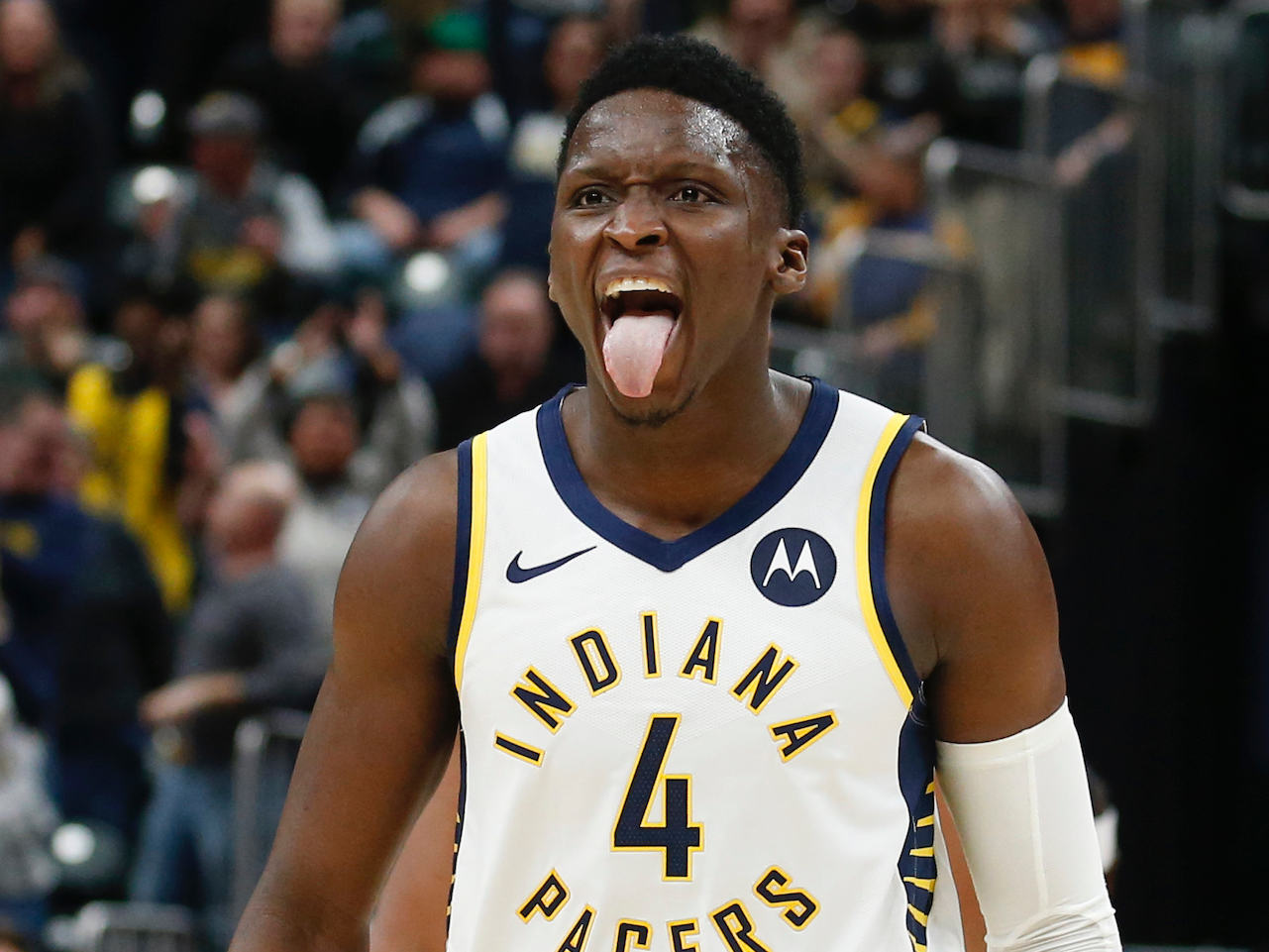 Victor Oladipo learned about the sudden shutdown of the NBA season the same way many of us did – on TV.

On the evening of March 11, the two-time NBA All-Star was at home, flipping between channels to catch snippets of the league’s slate of games for the night. Luka Doncic and the Dallas Mavericks took down the Denver Nuggets, Joel Embiid dropped 30 in the Philadelphia 76ers’ win over the Detroit Pistons, and the hapless New York Knicks managed to record a W against Trae Young and the similarly-hapless Atlanta Hawks. 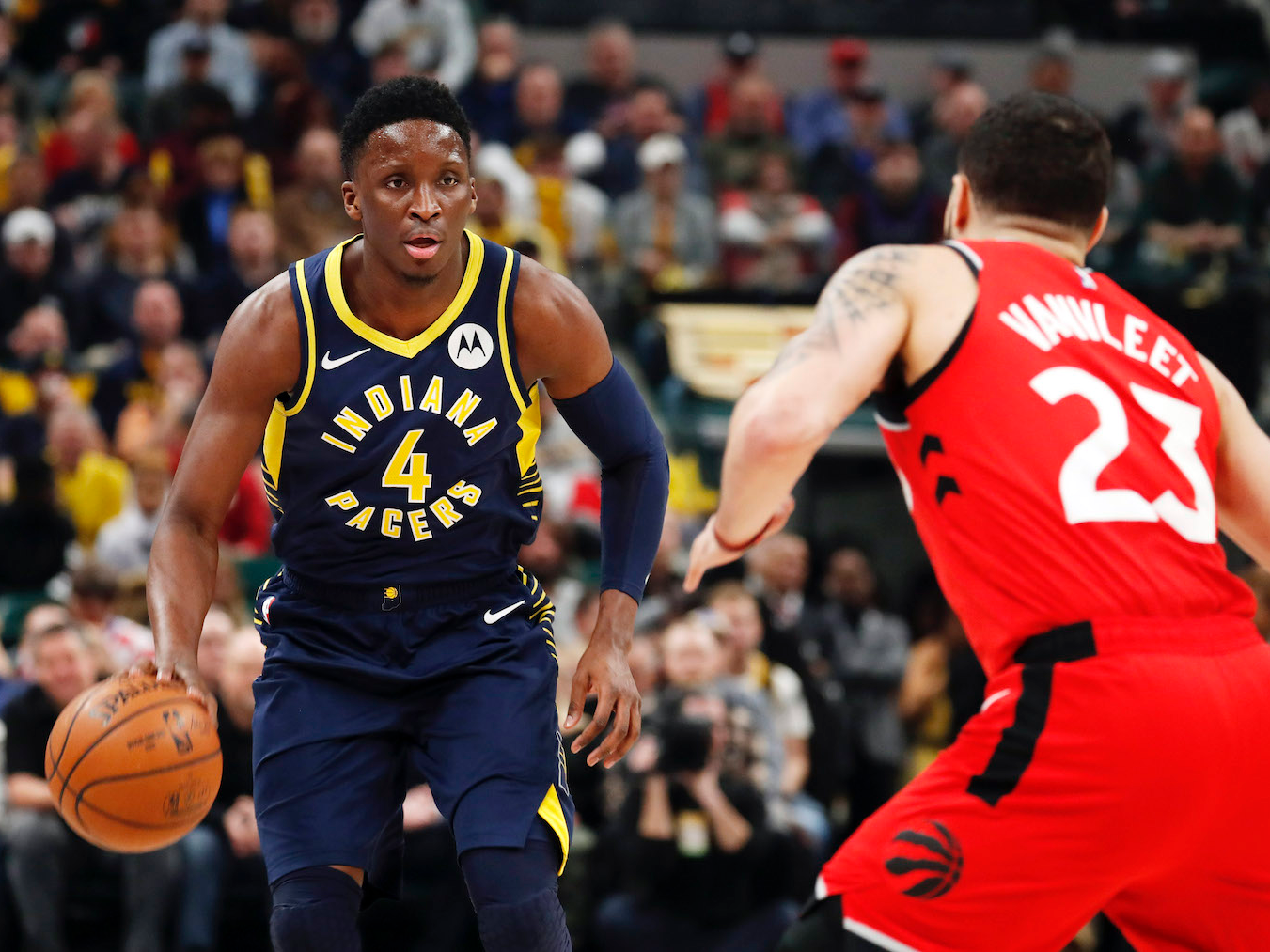 Oladipo remembers gearing up to watch Zion Williamson and the New Orleans Pelicans later in the night, but first up was the Utah Jazz versus the Oklahoma City Thunder.

Then everything got turned upside down.

Minutes before tip-off, the Jazz announced that Rudy Gobert had tested positive for COVID-19 and the game was cancelled as Utah’s players were placed in isolation in their locker room. Soon enough, the entire season was put on hold, and Oladipo’s source of income was suddenly in question.

“I was switching back and forth between games when the alert came on,” Oladipo told Insider. “I was like ‘Whoa, are you serious?’ And they had to stop games and they came out with the announcement that the rest of the season was cancelled.”

“It was a different type of ‘Whoa, what do we do now?’ type of feeling,” he added.

Late in January, Oladipo had returned to the court after a brutal leg injury kept him off the floor for more than a year

The seventh-year guard was finally beginning to find his groove when the coronavirus pandemic – and Gobert’s diagnosis – forced the NBA to shutter its doors for the season. 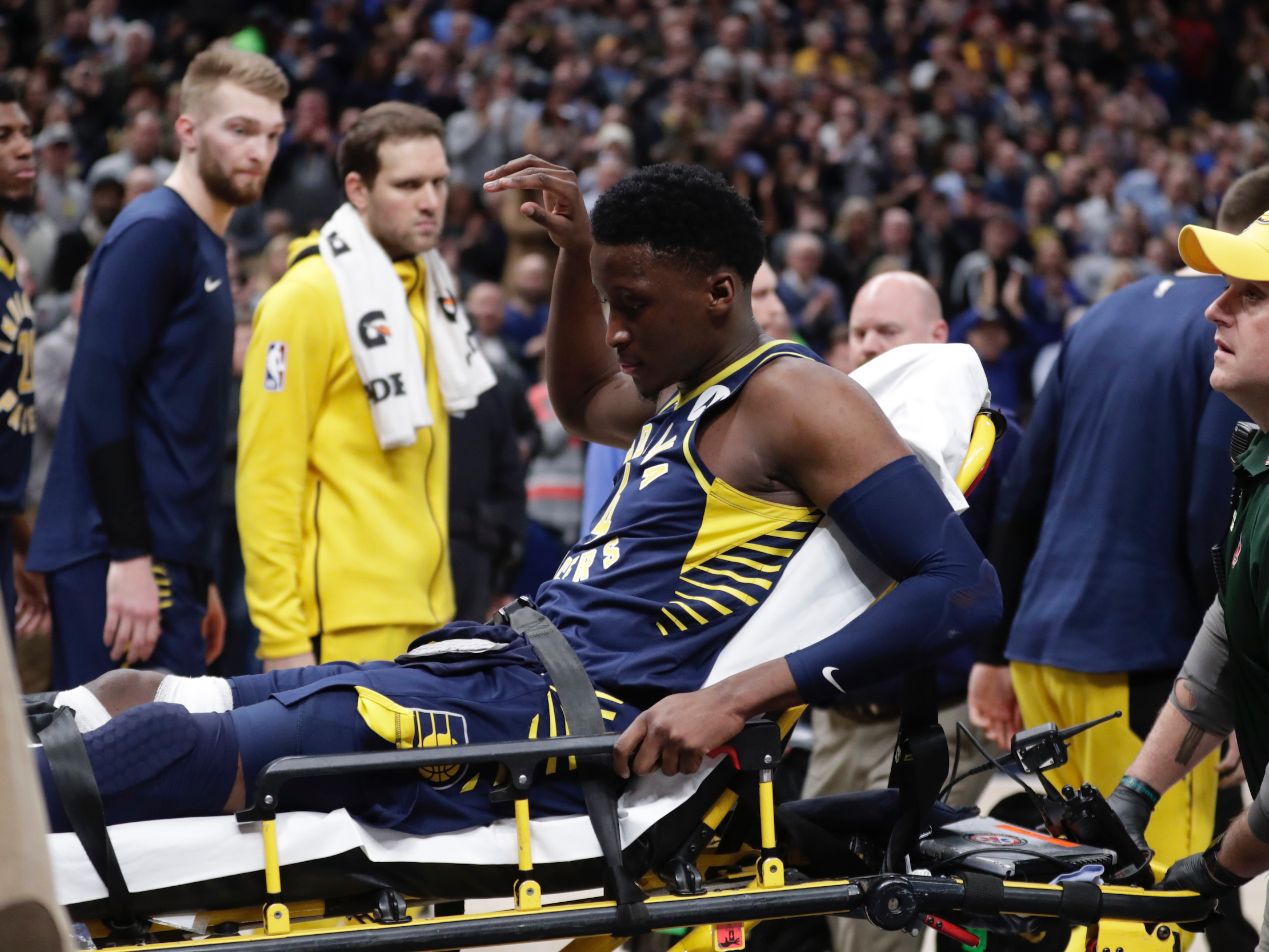 “Coming back isn’t always peachy clean,” Oladipo said. “There were a few bumps in the road, but before the quarantine started I was starting to hit my stride and get that feeling back.”

The timing obviously wasn’t ideal for anyone, but for a star on the mend after a full year of watching from the sidelines, the cancellation of the season was devastating. Still, Oladipo has tried to look at the bright side of the situation and views quarantine like “almost getting a second chance.”

“I had the opportunity to look at it two ways: negatively or positively. At the end of the day I chose the positive outlook on it,” Oladipo said. “I’m just using this opportunity to give me time to get healthy and continue getting stronger.”

“I’m definitely optimistic and definitely thankful for where I’m at right now,” he added. “I just have to continue to keep working hard and staying ready.” 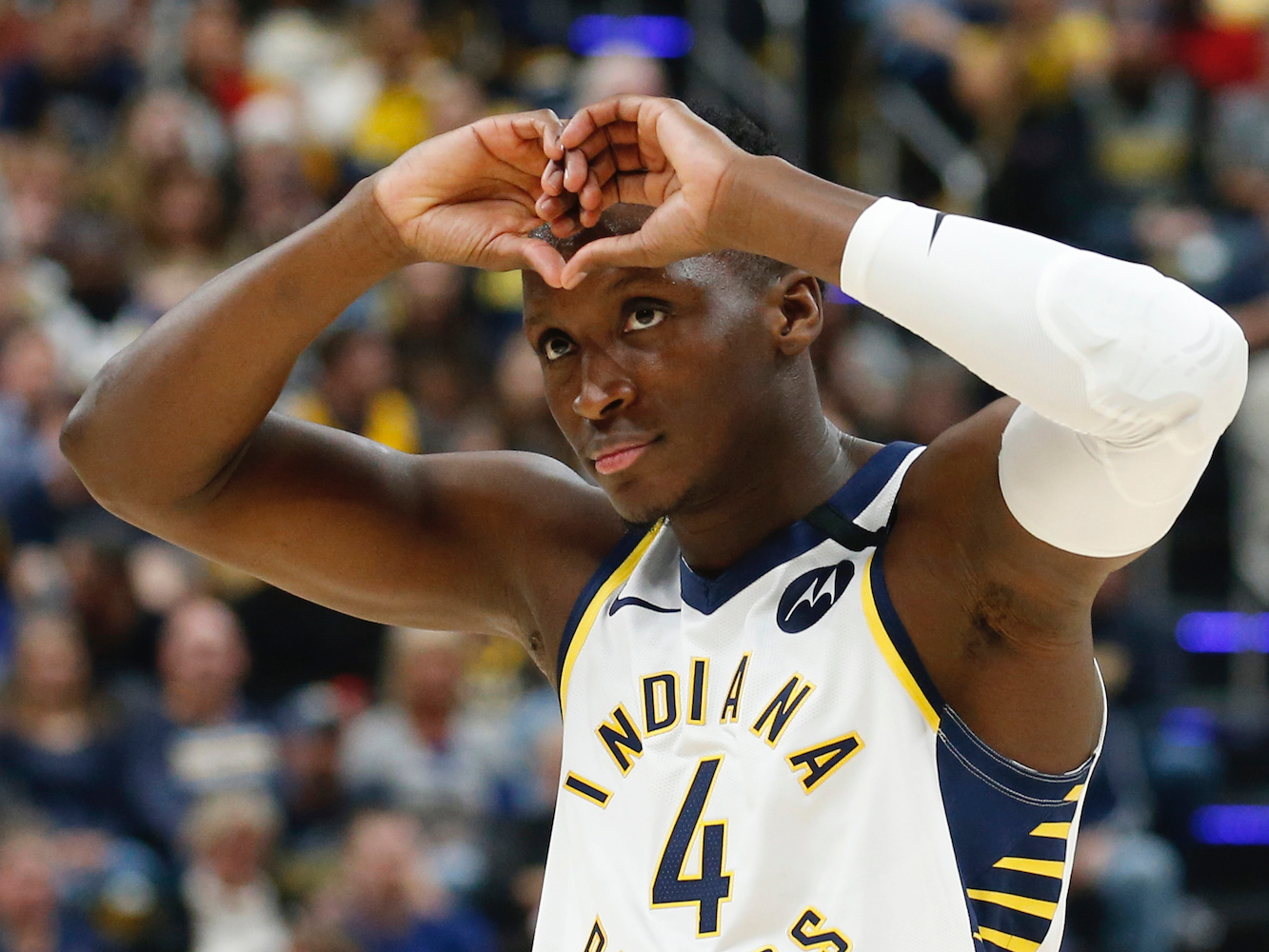 Oladipo has turned his garage into a makeshift weight room where he can bulk up and continue to rehab. And unlike many other NBA players, Oladipo is fortunate in that he has access to a court where he can safely put up shots while continuing to adhere to social distancing protocols.

“For the most part I’m just trying to stay ready because you don’t know what tomorrow can bring,” he said. “I’m really focused on the court and getting back to my old self and actually getting back to better than my old self. That’s my number one priority.”

When he’s not refining his game, Oladipo is busy discovering new activities and picking up old hobbies that he had set aside

He sees quarantine as “a time for people to relearn themselves,” and he’s been doing a bit of everything as a result. He hosts a weekly Instagram Live concert series on the NBA Instagram page to promote independent artists, plays lots of ping pong, watches “The Last Dance,” and works on his own music.

“Not being able to do everything that we do on a normal basis forces us to attack and pay attention to things that we might not normally get a chance to,” Oladipo said.

An accomplished vocalist, Oladipo has released multiple albums and gotten favourable reviews on his music. He appeared on the second season of Fox’s “The Masked Singer” and has collaborated with popular artists such as Eric Bellinger, 2 Chainz, Trey Songz, and Tory Lanez.

“I got some new stuff brewing,” Oladipo said. “I’m definitely planning on dropping another album soon. I just have to make sure everything’s right and that it’s the right fit, so I’m just taking my time.” The 27-year-old is also committed to doing his part to help those most affected by the crisis currently at hand. Oladipo encourages fans to share their best “tunnel walk” looks to help raise money for COVID-19 relief efforts in Indiana. Each time someone posts their ‘fit on Instagram with #flipyourlook and @motorolaUS in the caption, Razr donates $US50 to the IEDC Foundation, which provides lifesaving PPE from local and regional businesses to aid in the fight against the pandemic.

“It’s a tough time and luckily we’re fortunate that guys like myself and other guys in the league are able to withstand something like this,” Oladipo said. “But there’s a vast majority of people who aren’t, and I feel like it’s our job and duty to help people like that.”

Even though he’s kept himself plenty busy, Oladipo really, really wants to get back to NBA basketball

He says he’s “itching more than someone with Chickenpox” to rejoin his Indiana Pacers teammates on the court, but recognises that the current situation is “about life and death, not winning and losing.”

“Of course we miss the game and of course we want to play, but when it comes down to threatening your life, you have to take it really seriously,” he added. 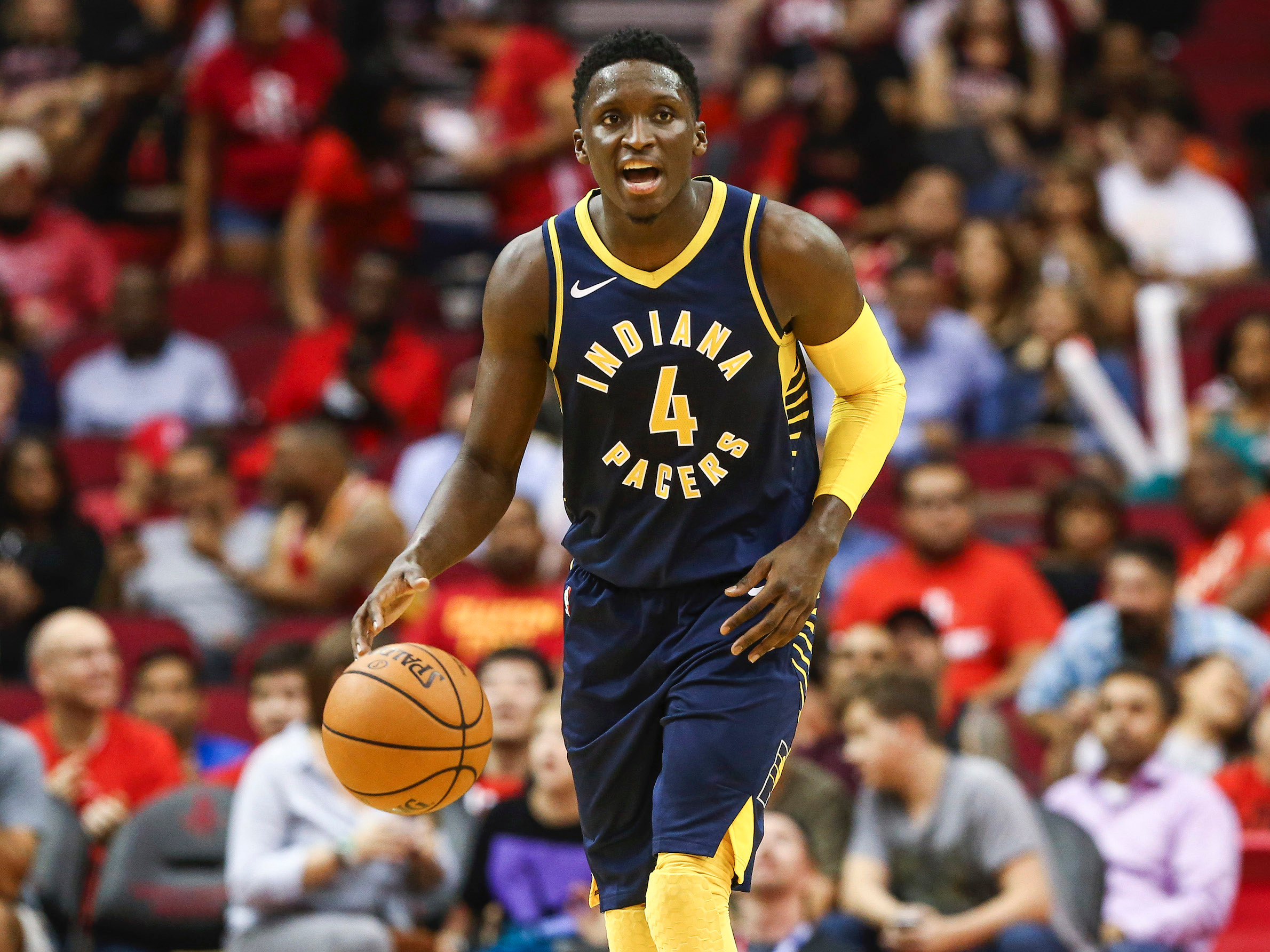 Like the rest of us, Oladipo has no idea when the coronavirus pandemic will be under control to the extent that NBA players can return to the hardwood.

“During this pandemic, we’re all just guessing and the unknown is a scary thing,” he said. “Not knowing what happens next or where to go from here is a tough pill to swallow.”

While he acknowledges that the uncertainty of it all is quite unsettling, Oladipo is doing what he can to control the controllable and be ready as soon as he gets the call.

“I’m just trying to keep working and do what I do,” Oladipo said. “I’m trying to stay ready and control what I can control during this time because a lot of things are out of your control.

“Eventually, when things get back to normal, you can just pick up where you left off,” he added.