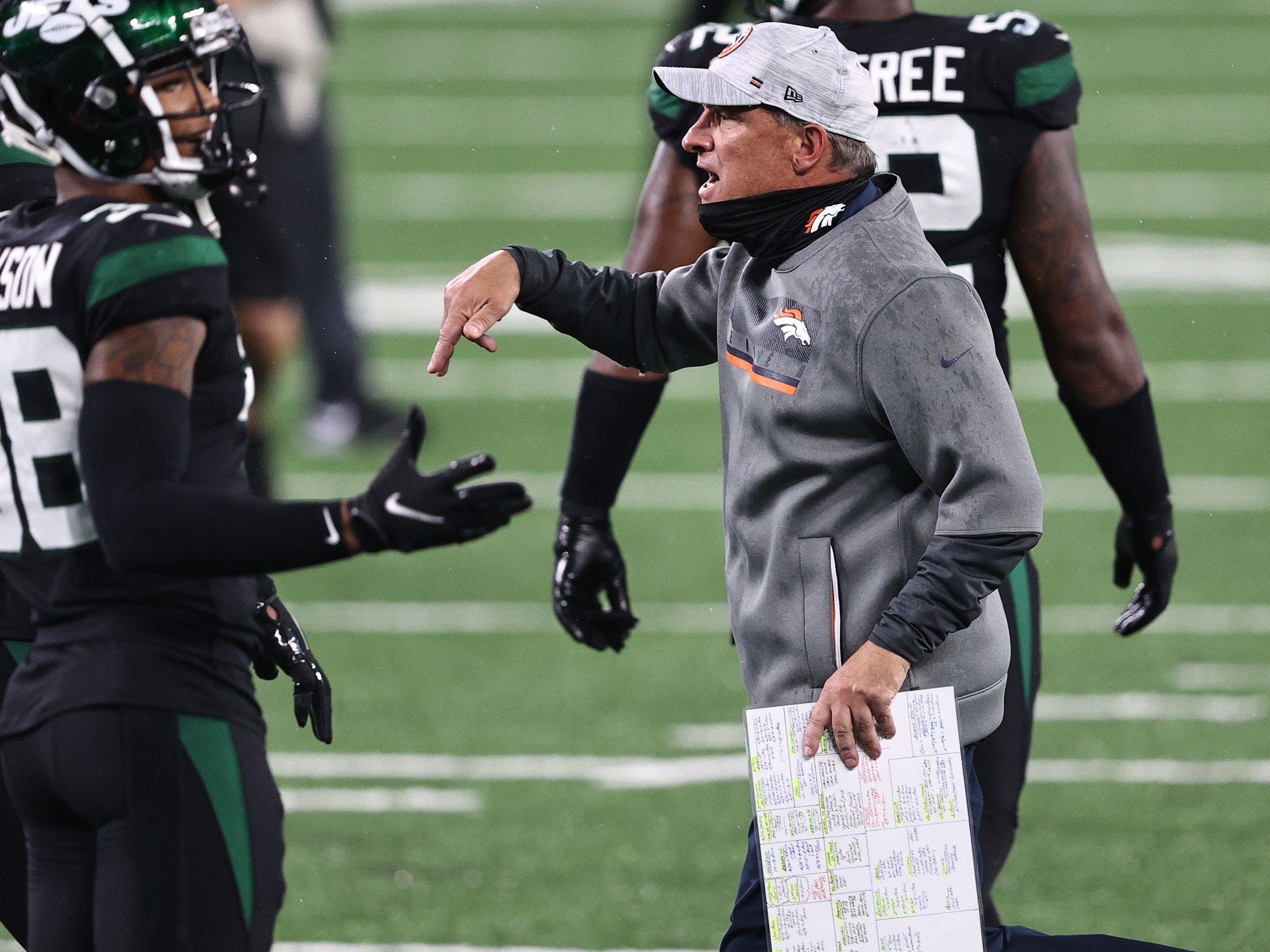 Elsa/Getty ImagesVic Fangio signals to his players to leave the field post-game.

Denver Broncos head coach Vic Fangio had a clear message for his players as soon as the final whistle blew after the team’s game against the New York Jets on Thursday night.

Fangio was committed to skipping the post-game pleasantries to avoid further conflict developing between the teams.

In the final seconds of the game, the outcome had already been decided. The Broncos had the ball and a 37-28 lead after the Jets had turned the ball over on downs with just over a minute remaining in the game.

All that was left was for the Broncos to down the game away with their final possession, but Gase made the odd decision to use the Jets’ remaining timeouts in order to stop the clock before the game could end.

Had it been a one-score game, Gase’s effort would have been more understandable, but the Jets needed two scores to catch the Broncos and simply didn’t have the time available to do it. For all intents and purposes, the game was over.

But Gase used his timeouts, leaving the Broncos still needing to drain off the final seconds of the game. Fangio decided to do this by having Rypien drop back and heave a lofting ball into the air as the clock expired. As Rypien dropped back to do so, he was met with a late hit, prompting referees to throw the flag.

It was a cheap shot on a quarterback who was just seconds away from securing his first win as an NFL starter, and it was far from their first infraction â€” the Jets committed a whopping six personal foul penalties on the night.

By the time that the Broncos were finally able to end the game, Fangio had clearly had enough, and signalled his players to head straight to the locker room rather than meet their opponents at midfield.

Broncos HC Vic Fangio appeared to direct his team off of the field right as the clock hit 0:00 without interacting with the Jets at the end of tonight's game. pic.twitter.com/ffIoRM3B1K

After the game, both coaches said that the decision to skip a traditional post-game handshake was in the best interest of the teams attempting to avoid conflict.

“There was a couple personal fouls there at the end that our sideline was getting pissed off about,” Fangio told reporters after the game. “I just wanted to avoid any confrontation at the end of the game and having it get ugly there, so I tried to get our guys to leave quickly just to avoid anything happening there. I thought it was the prudent thing to do.”

Gase had a similar thought to Fangio’s foregoing of the traditional post-game handshake.

“I think he was just trying to make sure we didn’t have any kind of melee,” Gase said. “It was getting heated.”

After Patrick Mahomes’s latest big week, it is clear nobody on Earth is having a better 2020, on or off the field

NFL POWER RANKINGS: Where every team stands heading into Week 4