Las Vegas police charge driver of minivan whose passenger pushed a cyclist to her death then fell out the window, hit his head on a lamppost, and died 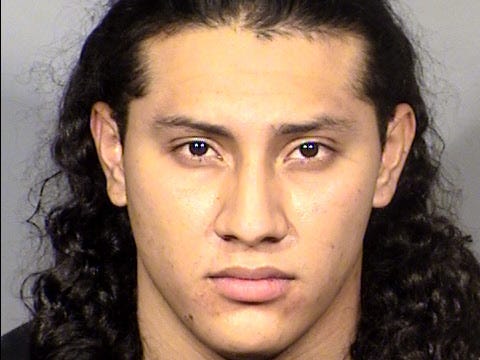 In a bizarre and tragic series of events, a man pushed a cyclist to her death from a minivan and then fell out the window, hit his head on a lamppost, and died, the police in Las Vegas said on Monday.

The police said Rodrigo Cruz, 22, was driving down Hollywood Boulevard on Sunday morning with a passenger, identified by the Las Vegas Sun as 20-year-old Giovanni Medina Barajas.

They pulled up alongside the cyclist, Michelle Weissman, when Barajas leaned out the window to push her and knocked to the ground, killing her, the police said.

Lt. Raymond Spencer told The Associated Press that the momentum of pushing the cyclist caused Barajas to fall out of the car and skid at least 150 feet before hitting his head on a light pole and dying.

“You have a woman who was out riding her bicycle, and they pull up next to her and strike her, causing her to die,” Spencer said at a press briefing.

He added: “It’s an absolute senseless act. There’s no reason behind this that I can tell you why it occurred, other than complete stupidity.”

Cruz, who was apprehended later Sunday, told authorities that he continued driving because he figured Barajas was uninjured, the Las Vegas Sun reported, citing the police.

Cruz was charged in a Las Vegas court on Wednesday with murder, duty to stop at the scene of an accident, and violating the conditions of his parole from a 2016 robbery case.

Weissman was a manager of the Cannery Casino Hotel, owned by Boyd Gaming.

“We are deeply saddened by the tragic and senseless loss of our team member, Shelli,” Boyd said in a statement. “She was well-known and well-liked by the entire Cannery team, and we will miss her. Our thoughts and prayers are with her family and friends during this very difficult time.”