A couple quit their jobs and sold everything to live in a van. Now, they make money by building tiny homes on wheels for others. 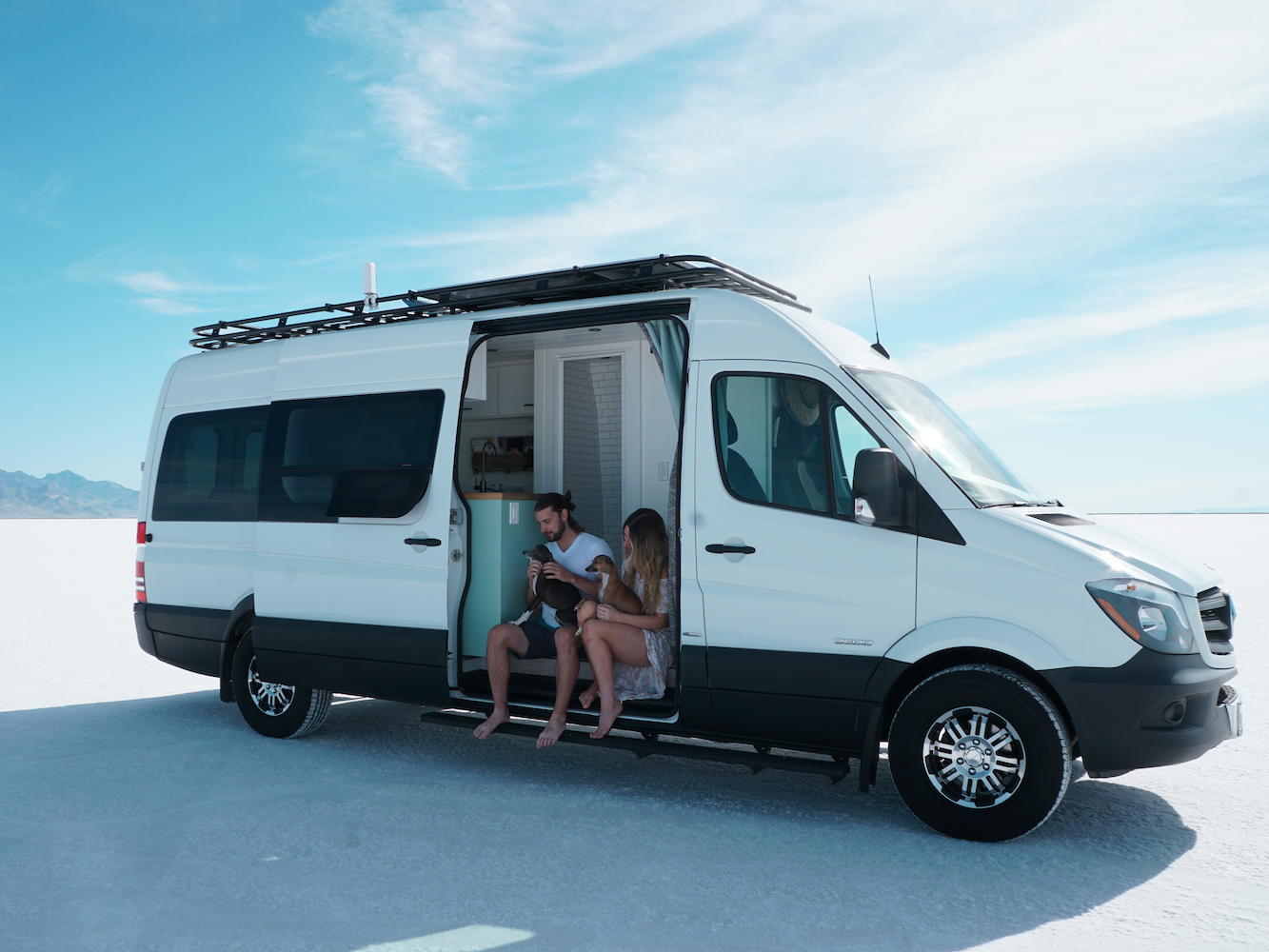 Sara and Alex JamesSara and Alex, and their dogs Bambi and Nugget, spent two years travelling in a van.

Sara and Alex James may no longer live in a van, but they are still living “van life.”

In 2017, the couple sold everything in their 1,500-square-foot house in order to hit the road in a van they converted themselves. Today, they have a thriving business custom-making vans for others who want to travel in style. To date, they say they have custom-made nine vans for clients, and are fully booked until 2022.

The two say they met on Tinder. While they had previously connected in the health and fitness sphere – Sara was a health and fitness blogger in Los Angeles, California; Alex was a personal trainer in Huntington Beach, California – they ended up matching on the app and moved in together shortly after. 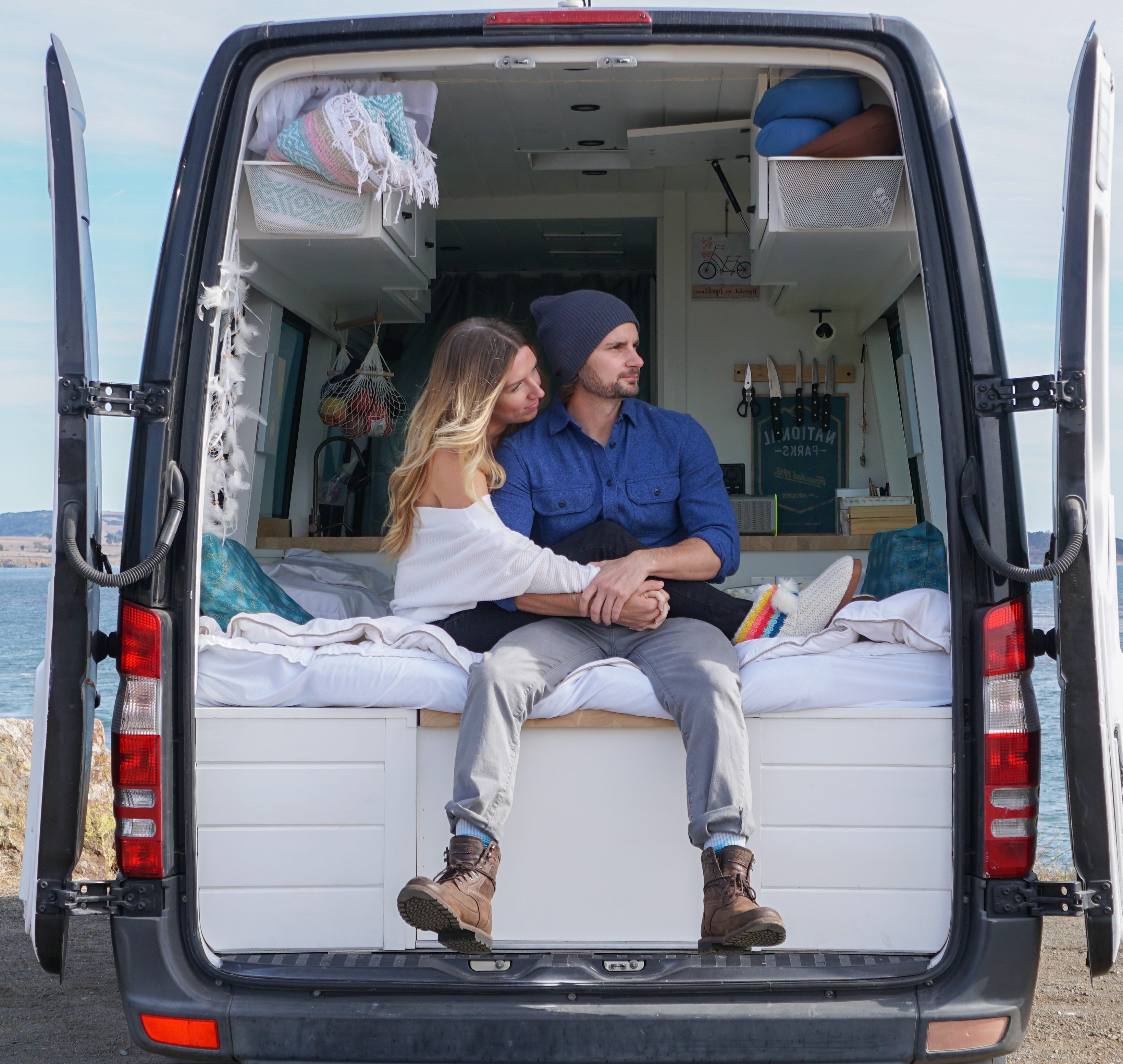 Sara and Alex James‘We love working with our hands and not being on the computer all the time. It’s a creative outlet for us. It’s a lot of work, but we can’t imagine doing anything else.’

By the time they were flirting with the idea of quitting their jobs to travel, they were living in Coeur d’Alene, Idaho, and both working in marketing. While they wanted to spend more time together “and cross things off the bucket list,” they felt like they didn’t have the time or money to make that dream a reality.

That is, until they stumbled across #vanlife on Instagram, a community of people travelling the world and living in stylishly converted vans.

Alex says that he was always into vans, and that Sara once told him, “You’ll never own an effing van.” Approximately, two months after that, however, they bought a van. 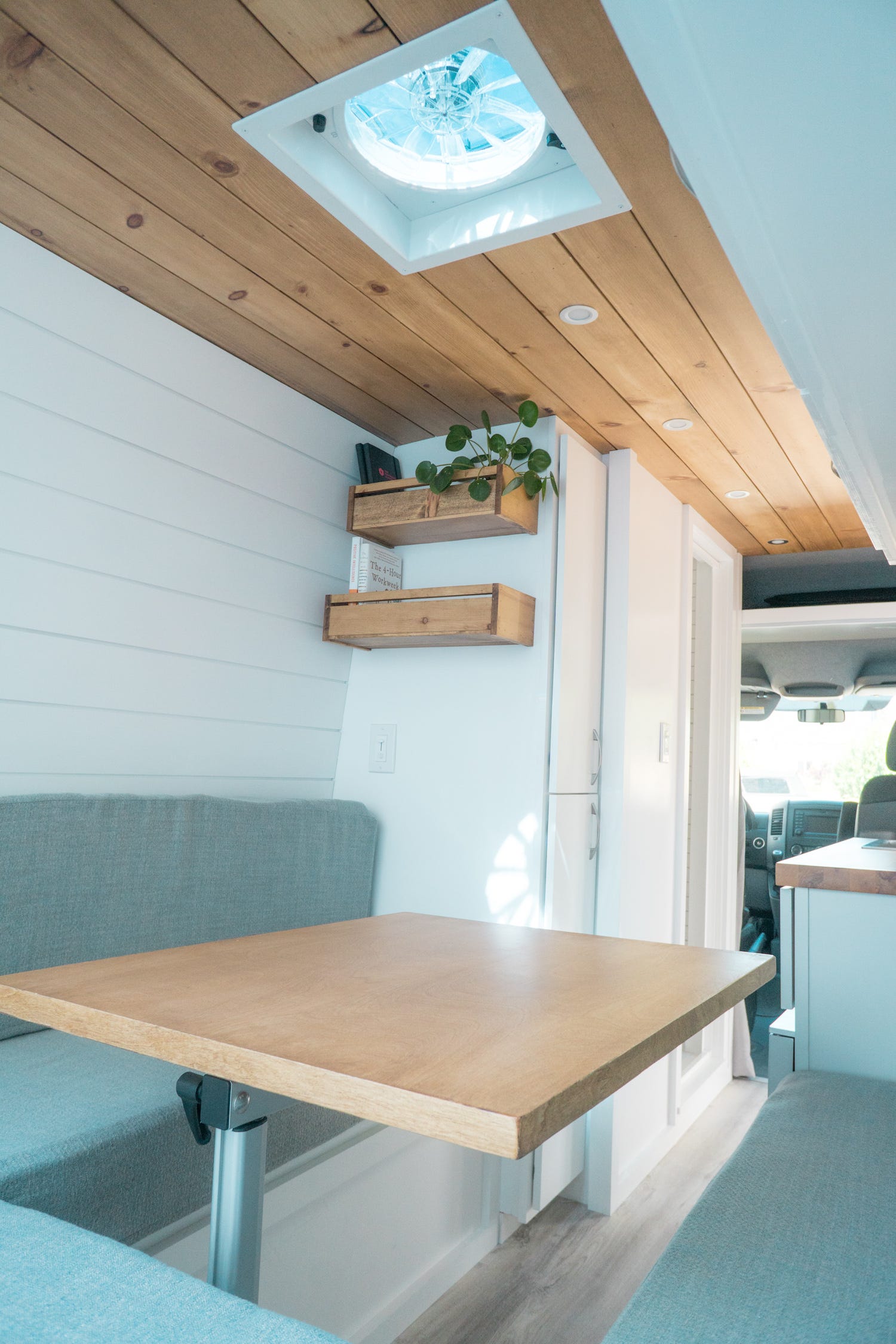 Sara and Alex JamesOne of the vans they created for a customer.

“I think my parents thought I was kidding when I was like, ‘We want to buy a van and make it like a tiny house,'” Sara said. “We were talking about it that whole Christmas, that we wanted to live in a van and go travel, and they thought we were a little crazy. But we did it.”

Her dad, a custom home builder, came around to the idea and even helped them convert their first van that January, in 2017.

“It was so many hours of [Sara’s dad] and I sitting in the van going ‘How do you do this?'” Alex said. “Because nothing is level, nothing is square. That’s why our business is called Custom Crafted Vans, because everything is custom that goes into it: stuff that you would put in a house, stuff you would put it in an RV, stuff you would put in a boat, and then hodgepodge it all together to fit into a van and make it all work. And then we had this ambitious idea to make it look as homey as possible.” 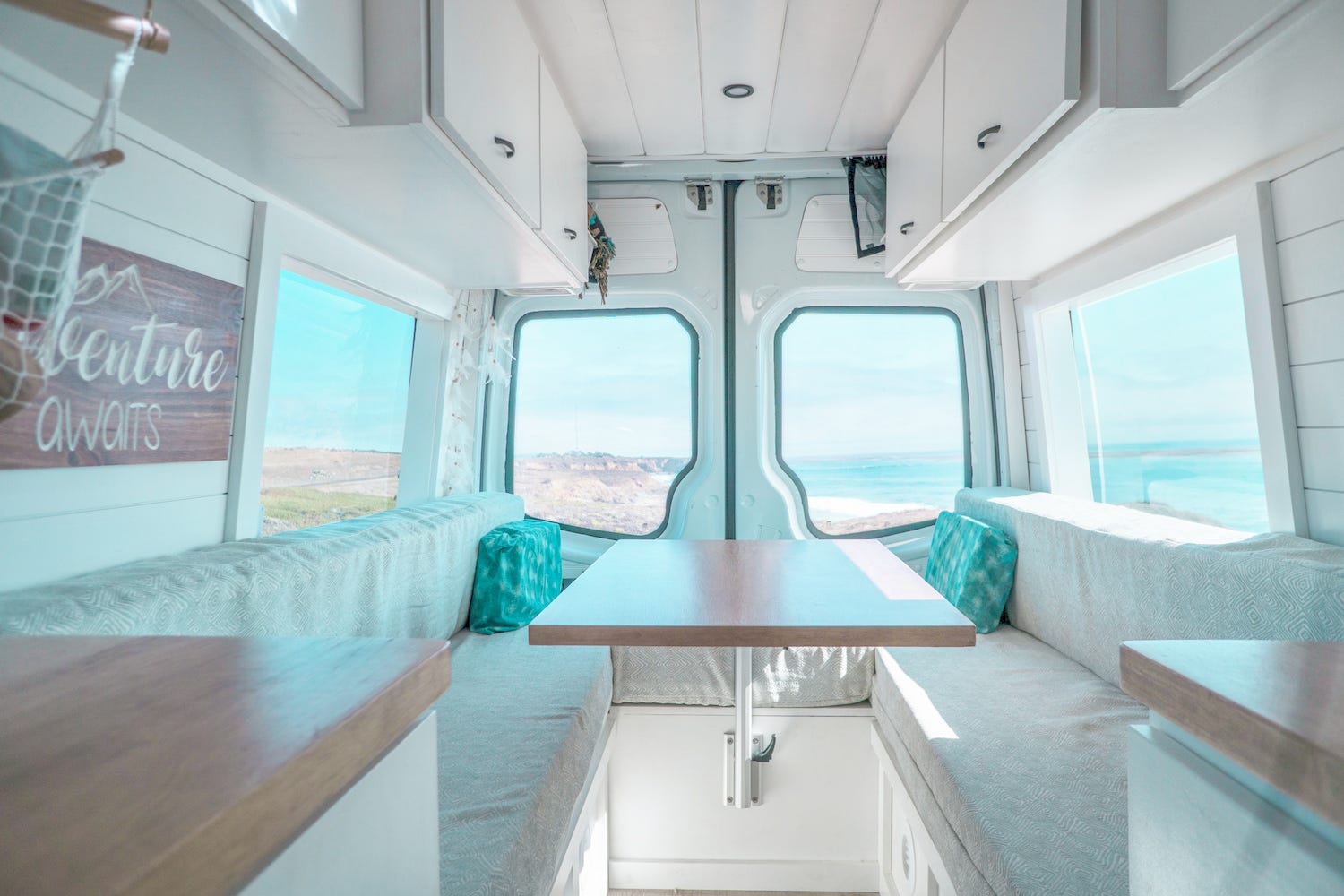 Sara says that before creating their first van, they had never seen another one with the same layout, which included a full bathroom with a shower and toilet. She says most people had been using outdoor showers and cassette toilets (which have portable tanks), but that that wasn’t how they wanted to “do van life” for themselves.

‘We wanted to really feel like we were in a house and have everything a home has,’ Sara said

After some trial and error, they managed to finagle a layout that gave them an extra 20 inches of space for the bathroom – a huge amount for a van – and say that they now see their design everywhere. 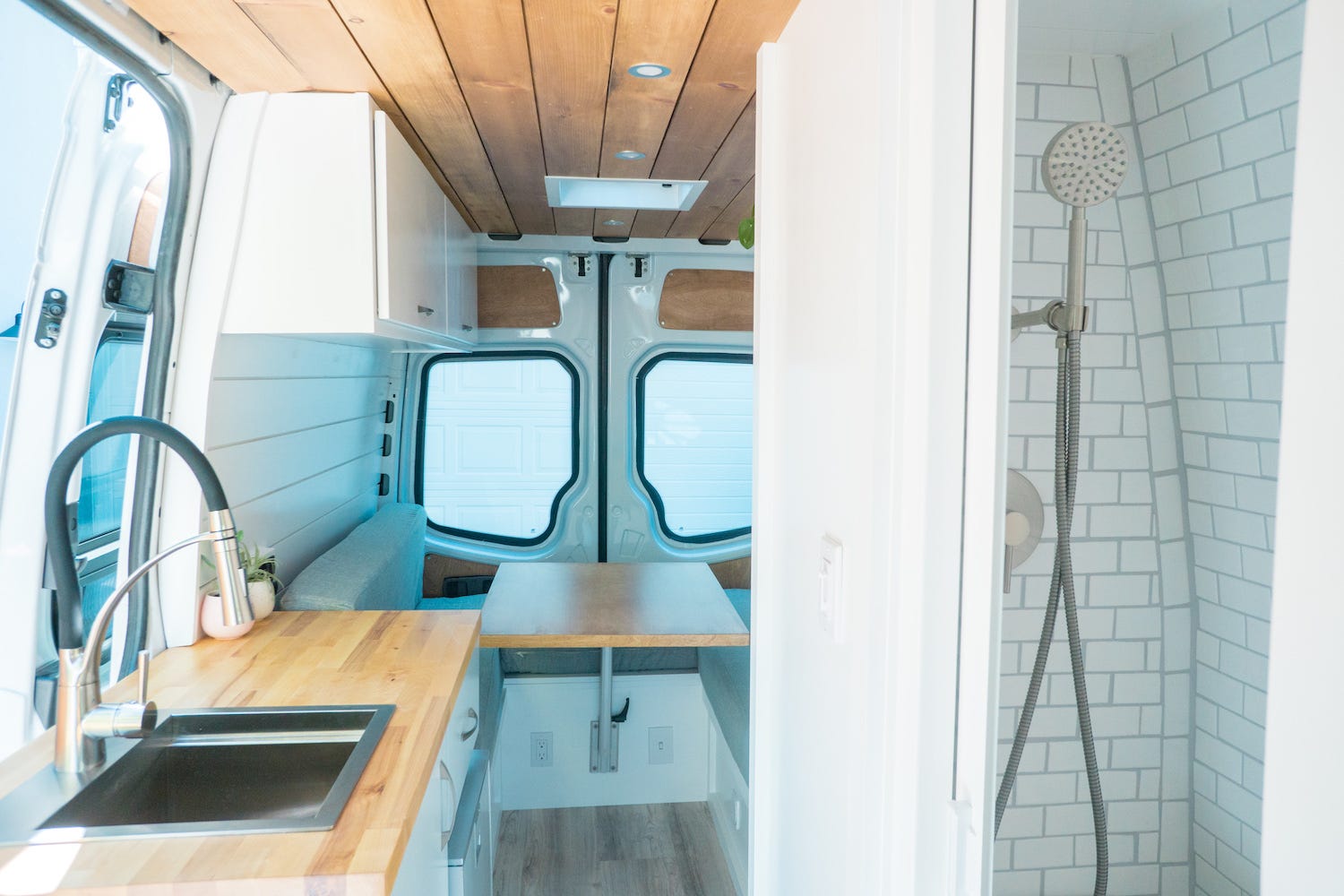 Sara and Alex JamesThey managed to get an extra 20 inches of space to build a bathroom.

That’s partly how they make their living today. Besides actually creating vans for clients, they also sell a van layout guide featuring different floor plans of vans they have already built, with all the dimensions and specs needed to recreate them.

“Being solely reliant on social media is hard sometimes,” Sara added, mentioning how finicky algorithms can be. She says they also make money with sponsorships, Amazon affiliate links, and Google AdSense through YouTube.

The average build time for one of Alex and Sara’s vans is between 12 and 16 weeks.

When they get a van, they get it completely empty, usually even without any windows. The first step is to insulate the van and then install windows before the “rough-in” phase of basic framing, wiring, and plumbing. 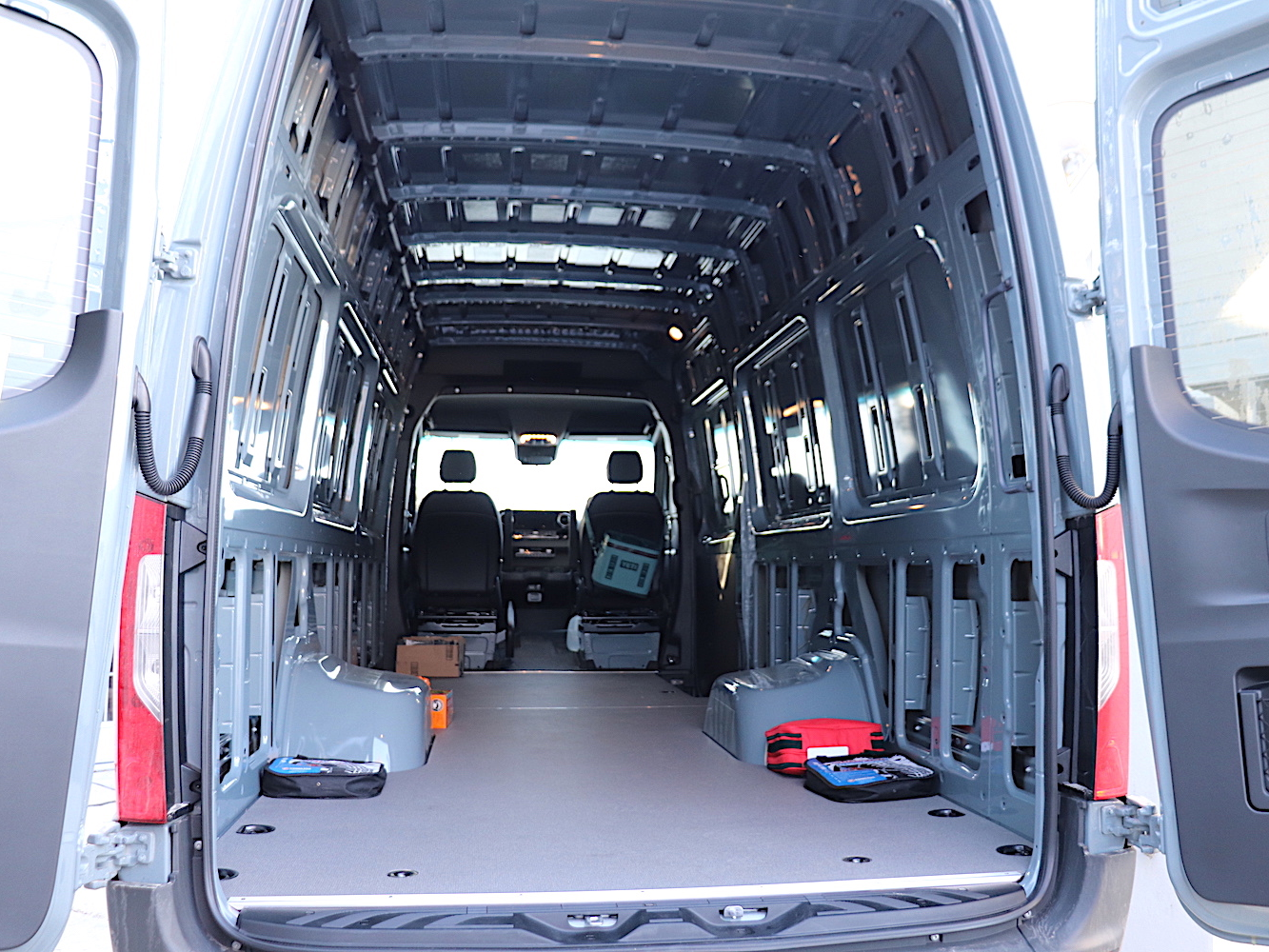 Sophie-Claire Hoeller/InsiderThey get the vans completely empty, and even without windows.

Custom Crafted Vans’ least expensive conversion starts at $US55,000 – and that’s without the van itself. But prices can go up to $US90,000, depending on the features and materials used. They tell me that a fridge, for example, can cost anywhere between $US500 and $US2,500, so the cost of van conversions really depend on customers’ choices.

“We don’t build cheap vans, and that’s why people come to us,” Alex said. “Because you can build these vans for a lot cheaper, and there’s a lot of people that do.”

However, he says that many of their clients are buying expensive new vans.

“If you’re buying a $US75,000 van, you’re going to invest and make the build really high quality,” he said, adding that there’s a better chance of then selling it and making some money back. 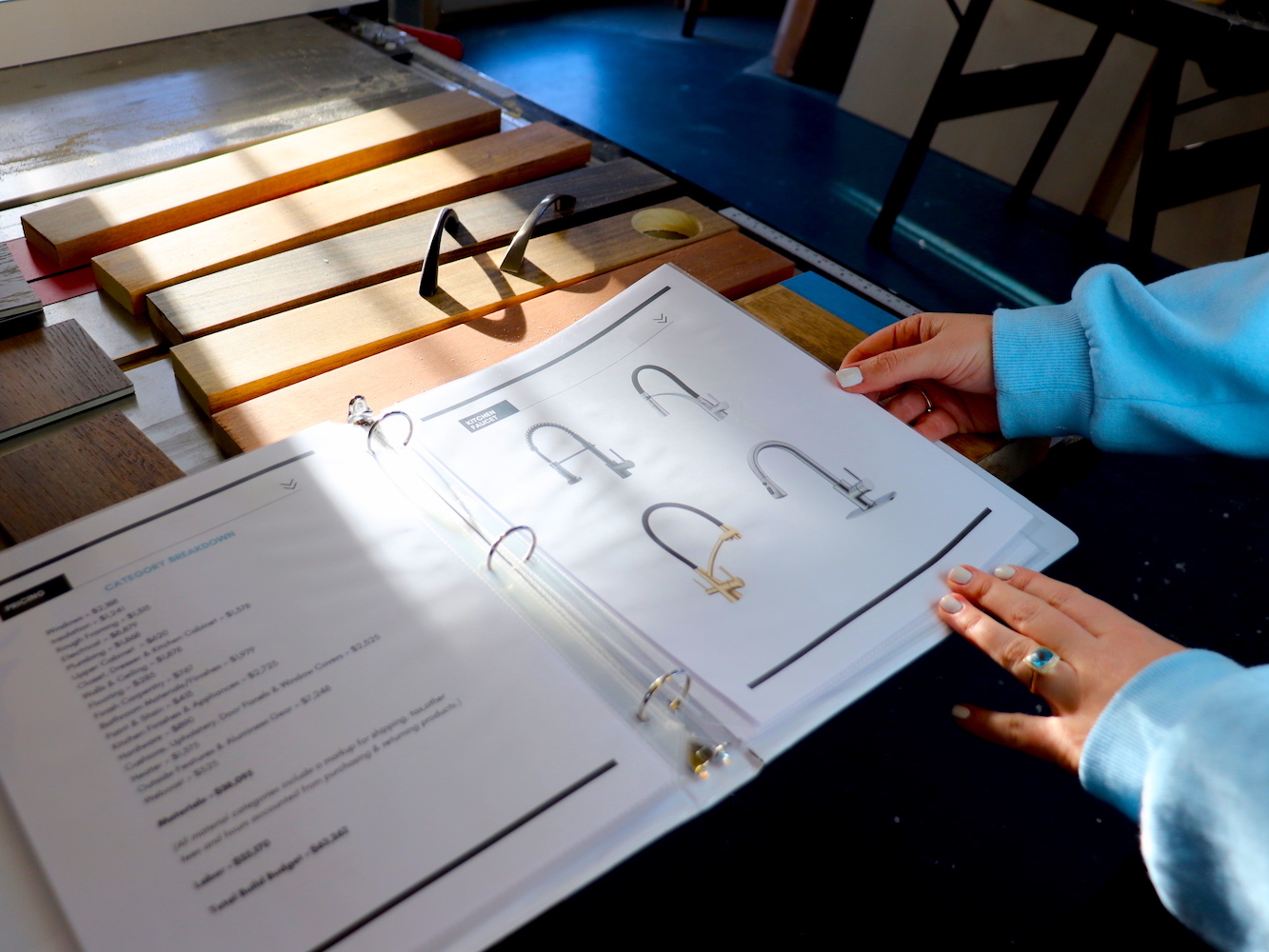 Sophie-Claire Hoeller/InsiderThey have a binder full of options, as well as paint and wood stain samples on hand at their shop.

According to Alex, Sprinter vans, in particular, don’t depreciate in value as fast as other vans, which is why they like using them for their builds.

“They hold their value really well, they have got lots of power, which is great when you put all this weight into them, and they’re just really fun to drive,” Alex said. “But they’re not cheap vans.” He adds that they’re so popular among “van lifers” now that they’re really hard to find used.

Sara and Alex say their clients vary from “young single dudes” to entire families; in vans for the latter, they will put bunk beds in the back. They said that everyone but their current client, an older single woman, has moved right into their new van full-time upon completion. 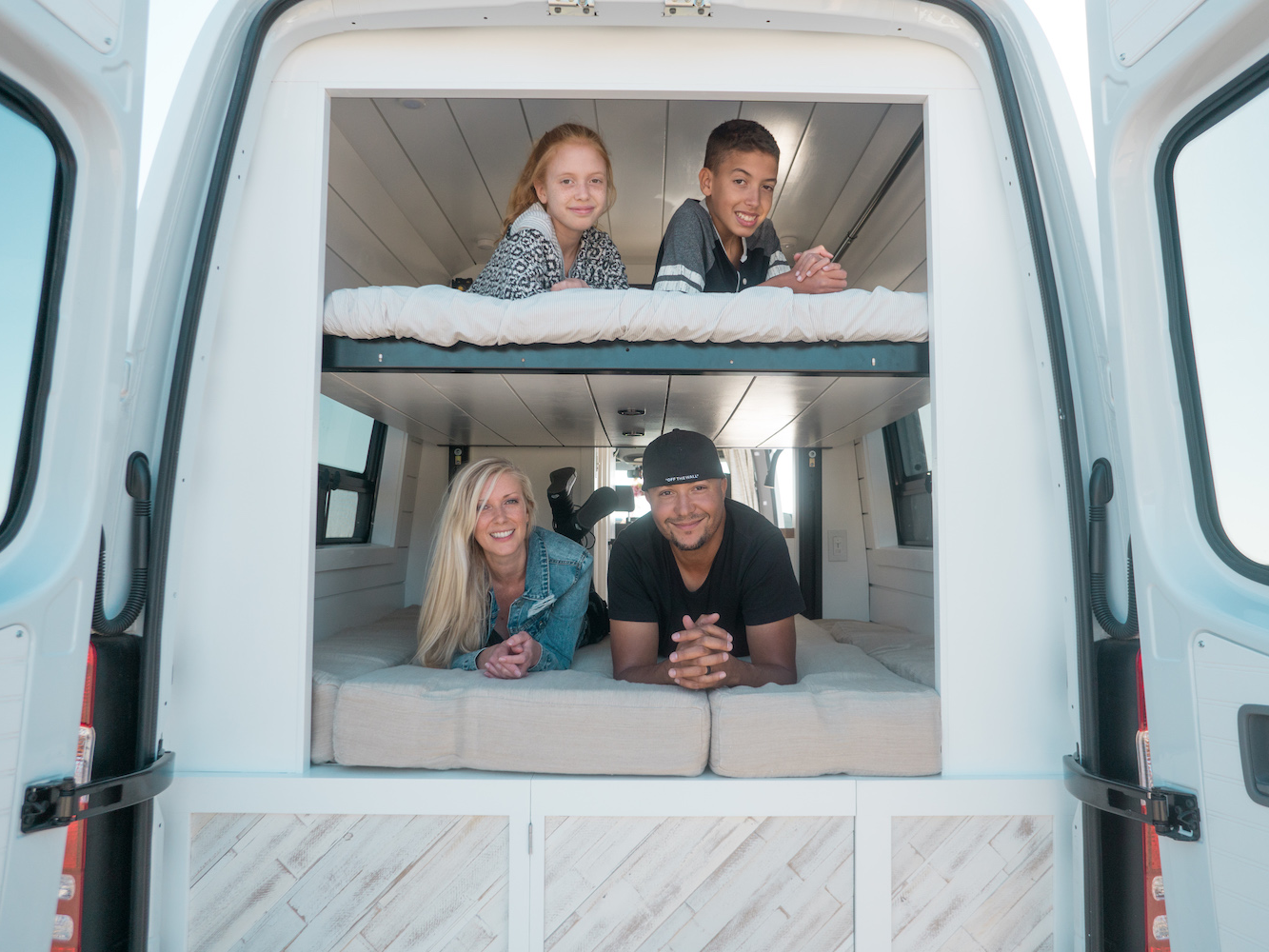 Sara and Alex JamesFor families, they will put bunk beds in the back.

What sets Sara and Alex’s vans apart, according to them, is that they truly are custom

The duo says they work closely with clients to choose every detail, from wood stains to paint colours. In their words, they don’t just make vans, they create “tiny houses on wheels.”

Custom Crafted Vans gets a lot of inquiries through its website. Once they get an inquiry, Sara and Alex will set up a phone call to go through rough ideas and budgets. If people are still interested after that call, they will start going through their “Van Build Consult Program,” which, for a $US1,500 deposit, includes three phone calls and 3D renderings of the van layout, with one revision included.

After that, it’s time to get into picking the materials, such as what kind of fridge or sink to buy, and then, after providing a detailed quote and a final materials list, a drop-off date is scheduled, in which clients drive their vans to Boise, Idaho, where Custom Crafted Vans is based, for Sara and Alex to get started. 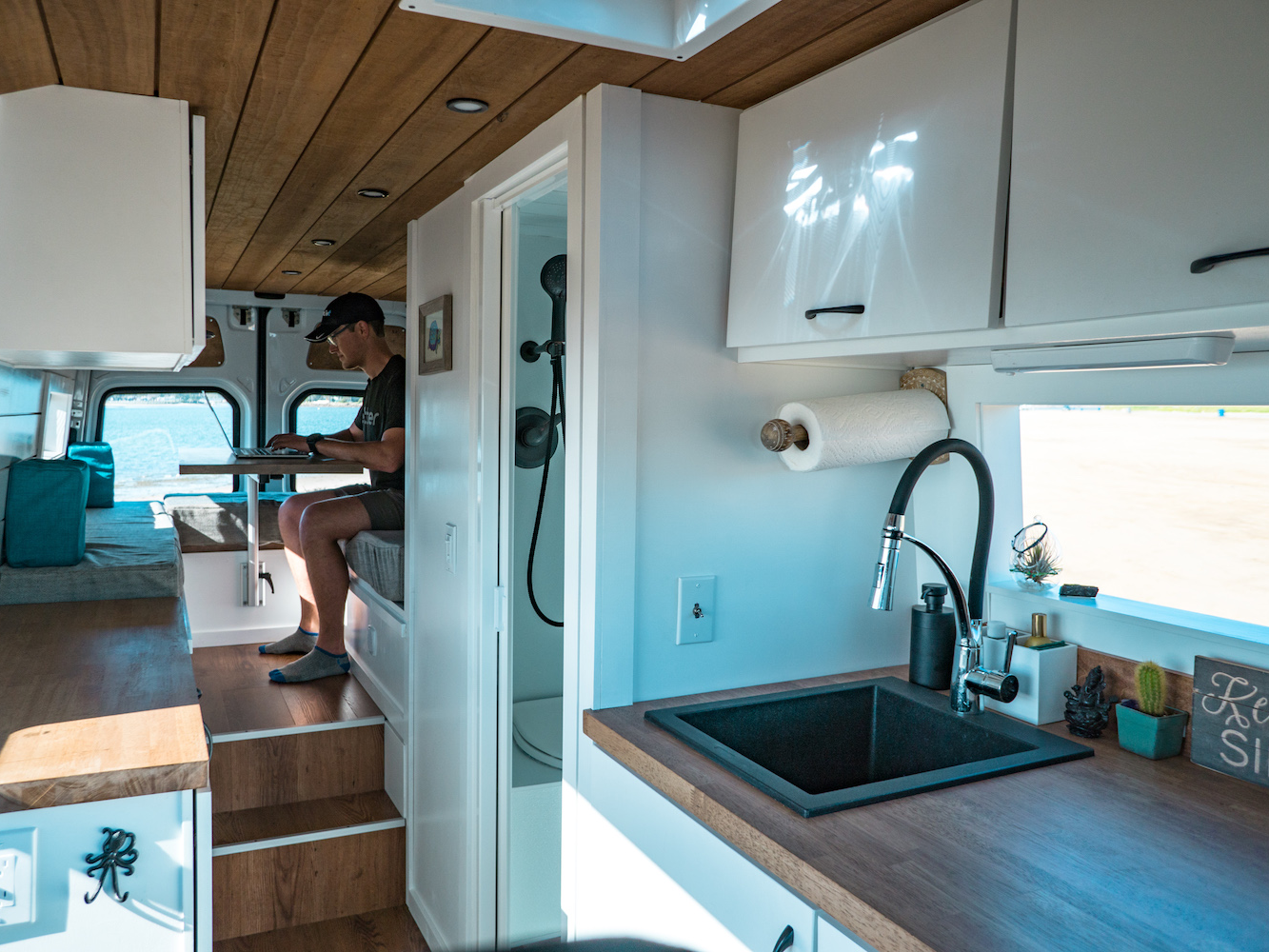 Sara and Alex JamesThey like their clients to stick around in their new vans for a bit to get a feel for them.

Sara and Alex then have three to four months to build the van home before clients fly back to retrieve them. They usually ask clients to stick around for a day or two and sleep in their new vans to get a feel for them and ask any questions that might pop up. While their standard rate is around $US75 an hour, Sara estimates that they make less than half that in a build, since they put thousands of hours into them, and don’t really track them properly.

“We wanted to share this message of freedom and living life now because it’s really all you have,” Sara said. “We don’t know that we’re going to get to do this when we’re older, so let’s hit the road.”

Sara and Alex JamesAlex cooking in one of the vans.

Since they had both worked in marketing before, they knew that they could somehow make money doing this, which is how their blog “40 Hours of Freedom” came to be.

“We just had that faith that we could travel, create content, inspire other people, and also finally get to see all the places we wanted to see,” Sara said.

They worked around four to five hours a day, before checking out a local brewery, winery, or restaurant.

“The most fun to us was giving back to local economies and spending money in all these places that we were going to, not just holing up in our van and doing nothing,” Sara said. Sara and Alex James‘We always put back windows in the doors because you (…) can just back up to the ocean or a beautiful view and just hang out there.’

Alex agrees: “You can go and you can be the van lifer that’s just living on the public land for the whole time that you’re there, or you can go and actually see what the place is about.”

“We wanted to buy a home and have a baby, and building out vans just kind of aligned with that because we didn’t want to get out of van life because we love it so much,” Sara said. “So it was an opportunity to help people get on the road in a different way.”

They originally settled in San Diego, and opened up a shop building vans there, but found that they could get an entire home and shop for a fraction of the price in Boise, where Alex’s mum lived. 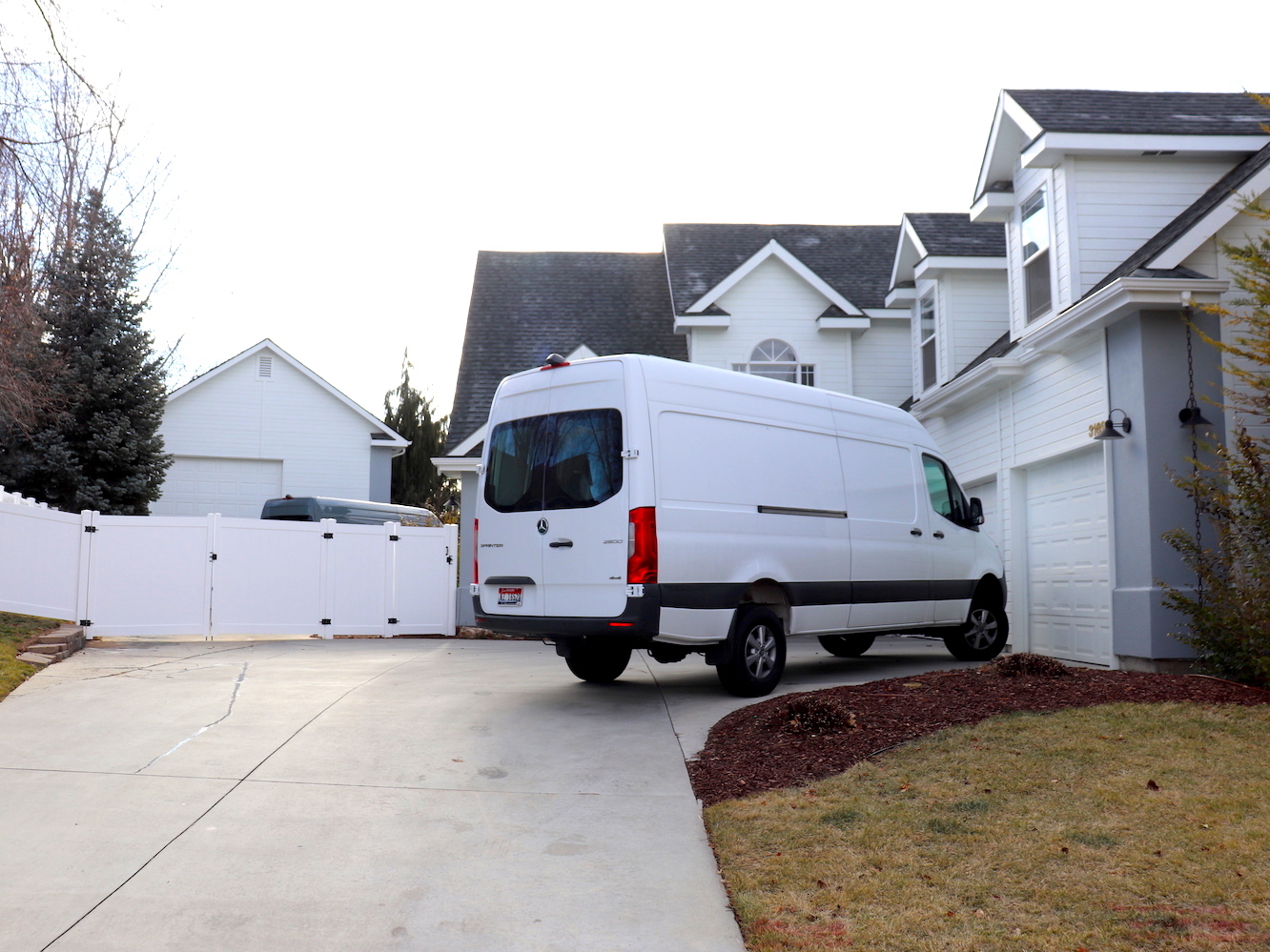 They said they wanted to explore the country before settling on one spot. Sara said she “honestly never thought it’d be Boise.”

However, they were drawn to its affordability, plus the fact that they had family there.

“There’s a lot going on here, it keeps growing. A lot of people are moving here from California, and that’s relatable to us,” Sara said. “And yeah, it was affordable, that was the biggest thing.”

“It’s pretty wild,” Sara said. “I just can’t even believe it. Our goal getting into van life wasn’t building vans. But we also were like, ‘That would be a fun career!’ We love working with our hands and not being on the computer all the time. It’s a creative outlet for us. It’s a lot of work, but we can’t imagine doing anything else.”

This story is part of our Next Stop series, in which Insider visits the 10 hottest US destinations for 2020. Click here to read more and see all the places we’re exploring.