Could the decade-long trend of growth stocks outperforming value stocks be in the process of reversing?

In the short term? Yes.

In the long term? Probably not. 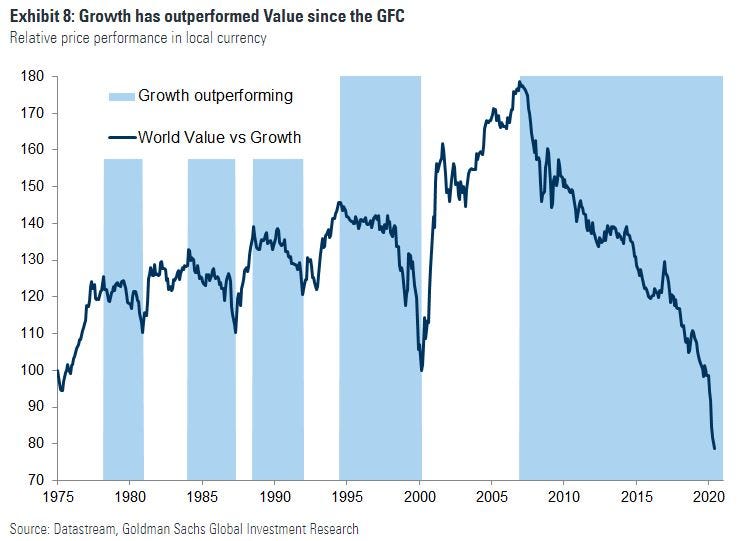 That’s according to analyst notes published on Tuesday from Goldman Sachs and Bank of America.

Over the past two weeks, many of the underperforming sectors during the COVID-19 sell-off started to recover and outperform their peers.

Industries like airlines, casinos, and cruise lines saw a significant jump in outperformance relative to sectors like healthcare and utilities.

“Historical experience suggests that this current rotation could continue in the short term,” according to Goldman.

BofA also sees signs that the rotation could continue:

“In 14 of the last 14 recessions, value has outperformed growth for at least 3 months when the economy showed signs of improving.”


Read more:
A portfolio manager at a $US4.6 billion shop breaks down his Warren Buffett-inspired approach to investing – and shares 3 stocks he loaded up on in a ‘really attractive’ market upended by coronavirus

BofA noted that the valuation dispersion between growth and value stocks is close to all-time highs, suggesting that the rally in value stocks can continue.

But even though value has outperformed growth stocks over the past two weeks, that doesn’t mean the trend will necessarily last because underlying long-term trends in the market haven’t changed.

“As with the previous examples of rotations since the financial crisis a decade ago, this rotation is unlikely to be sustained into a major trend in our view – unless growth, bond yields, and inflation expectations all rise in a more meaningful way,” Goldman said.

The bank said it thinks that without a big shift in gross domestic product expectations, this current rotation will likely be temporary and eventually, investors will continue to reward companies with strong balance sheets and stable cash flows.

Goldman concluded that as long as growth is scarce, growth companies will prosper.