As Trump tries to sabotage mail-in voting, the USPS has an idea to defend it against fraud, using blockchain 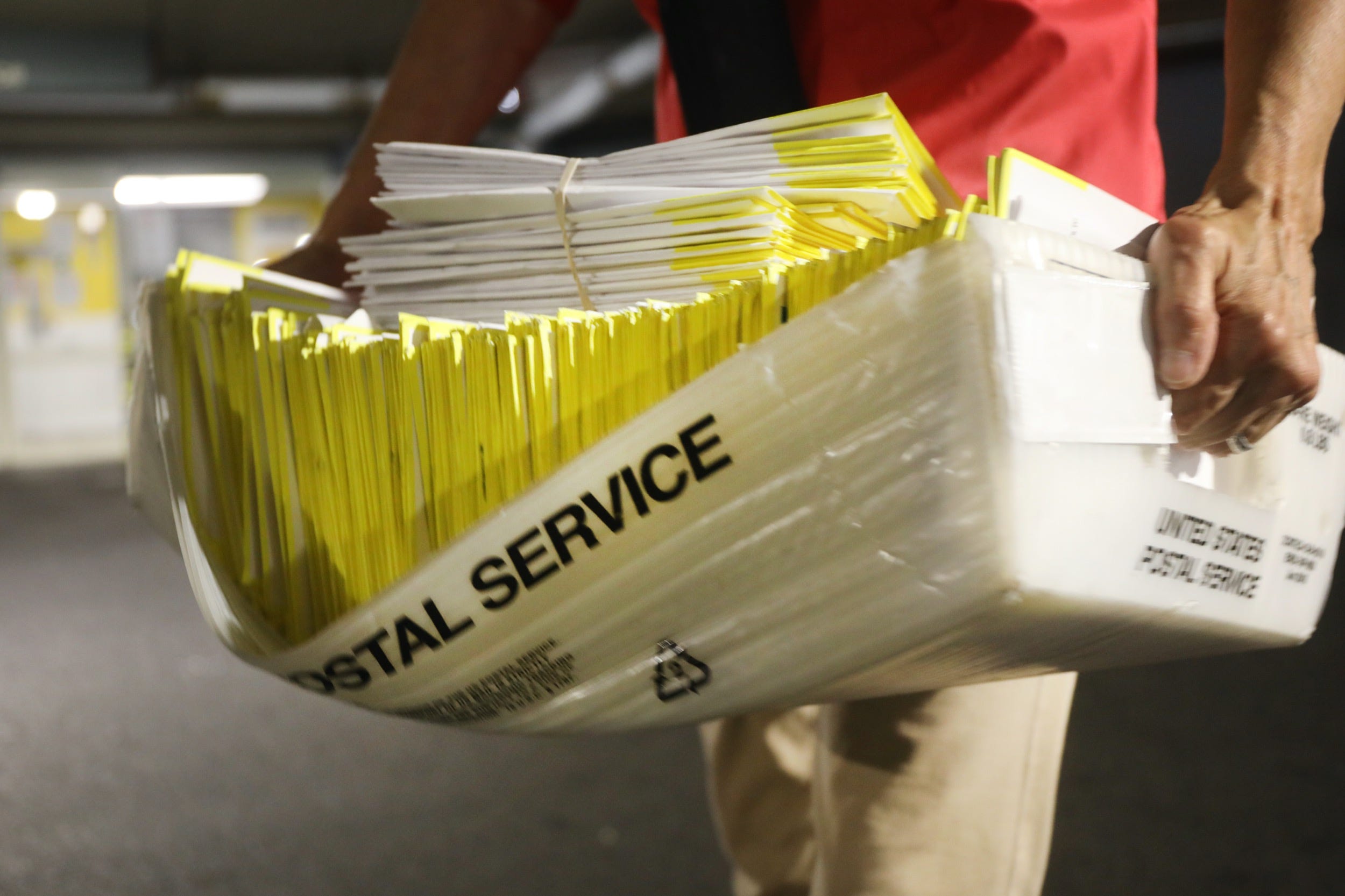 Spencer Platt/Getty ImagesThe USPS has been thrust into the spotlight as the pandemic forces the US to rely heavily on mail-in voting in November’s elections.

The US Postal Service has become an unlikely flashpoint of the upcoming elections due to President Donald Trump’s refusal to fund the cash-strapped agency, despite the outsized role it will play as millions of Americans turn to mail-in voting during the pandemic.

But even as Trump continues to make false claims attempting to link mail-in voting to fraud, the USPS has been working on new ways to make elections more secure and transparent, even if voters opt for mail-in ballots.

The US Patent and Trade Office made a patent filing from the USPS public last week, Forbes first reported on Friday, that would utilise blockchain technology to help verify voters’ identities, allow them to cast ballots online, and record results via a tamper-proof ledger.

“A voting system can use the security of blockchain and the mail to provide a reliable voting system,” the USPS claims in the patent application, which was filed in February.

The patent is still pending, and a USPS spokesperson confirmed that nothing from the application would be used in November’s election while declining to comment further.

Blockchains are digital ledgers that are intended to create more trustworthy records of past events. When new events – or “blocks” – are added to the “chain,” they contain a record of every past event that happened on that chain and are locked into the chain using cryptography so that the chain can’t be edited retroactively to hide or alter past events.

Trump has argued that mail-in voting could allow to someone vote on behalf of another person, or “double vote,” and that ballots could be tampered with after they’re mailed.

While researchers have repeatedly found that mail-in voting fraud in the US is extremely rare (one analysis found just 491 cases of fraud nationwide since 2000), the USPS patent offers a possible solution to both of those issues that could further increase voters’ confidence in election processes and results.

By using a blockchain to record votes cast online, the USPS could not only count votes faster, but also reduce the opportunity for someone to tamper with a ballot after it’s cast. Blockchains create “distributed” ledgers, meaning multiple computers verify each new block that’s added and store a their own copies of the ledger, making it impossible for a hacker to change the entire voting record just by accessing one computer.

“The votes of individual voters would be recorded, either on the blockchain or effectively timestamped and then recorded elsewhere – and so both help to mitigate the risk of double voting, or vote manipulation as well as give the voter confidence through transparency of the process,” Paul Madsen, technical lead at blockchain network Hedera Hashgraph, told Forbes.

The system proposed in the USPS patent would also leverage blockchains to register people to vote, ensure they cast only one vote, and keep who they voted for a secret.

According to the patent, “a registered voter receives a computer readable code in the mail and confirms identity and confirms correct ballot information in an election.” In various versions of the system, they either use that code to access an online ballot or can fill out their mailed paper ballot and then submit it online by taking a picture of it.

“The system separates voter identification and votes to ensure vote anonymity, and stores votes on a distributed ledger in a blockchain,” the patent said. Each voter is assigned a unique “pseudo-anonymous token” so that election officials can ensure that no one voted twice and that the correct ballot corresponds to the correct voter all without knowing that which specific person voted for which candidates.

However, cybersecurity experts have also raised a number of concerns with blockchain-based voting systems, noting that no system is hack-proof and pointing to several examples where the blockchain itself had security flaws.

But interest in the technology’s potential application for voting has been gaining steam. Forbes reported that some members of Congress have explored casting their votes using blockchains during the pandemic and the USPS has been looking into blockchains since at least 2016.