8 of the biggest scams to avoid when buying a car 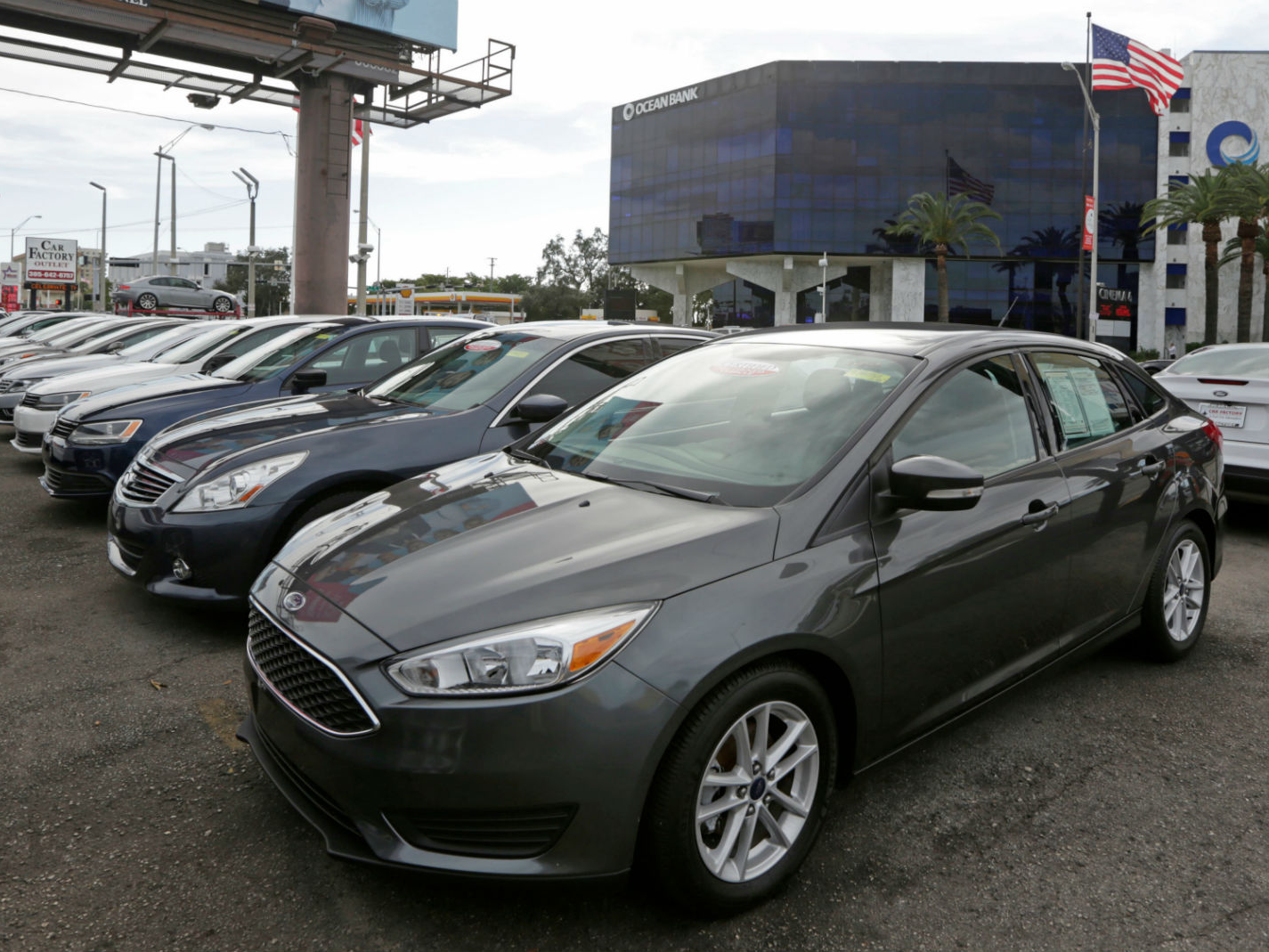 Alan Diaz/AP ImagesTo prevent a car salesperson from taking advantage of you, do your research beforehand.

Buying a car from a car dealership can be a stressful experience, and it is even worse when the dealer is trying to run a scam on you.

Your best defence is to arm yourself with knowledge before you go car shopping, according to Alan Diaz, Southern California branch manager for the car-buying service Cartelligent.

“If you plan things out and give yourself some time, it will pay off drastically,” Diaz told Business Insider.

Although the internet has leveled the playing field – “you can google info on the spot,” he said, and “dealers have to be better” – you should still be on the lookout for questionable tactics and deals that seem too good to be true.

Here are eight of the biggest scams Diaz said dealers try to pull when you’re buying a car.

Look out for the hidden costs for new cars “Price is not everything,” Diaz said. “There could be underlying costs which, in the long run, cost you more than the price of the car.”

For example, Diaz noted that a car priced at $US50,000 might be featured in an ad with discounts and rebates that take the cost down to $US30,000. If you aren’t eligible for all the incentives, your cost will be higher. 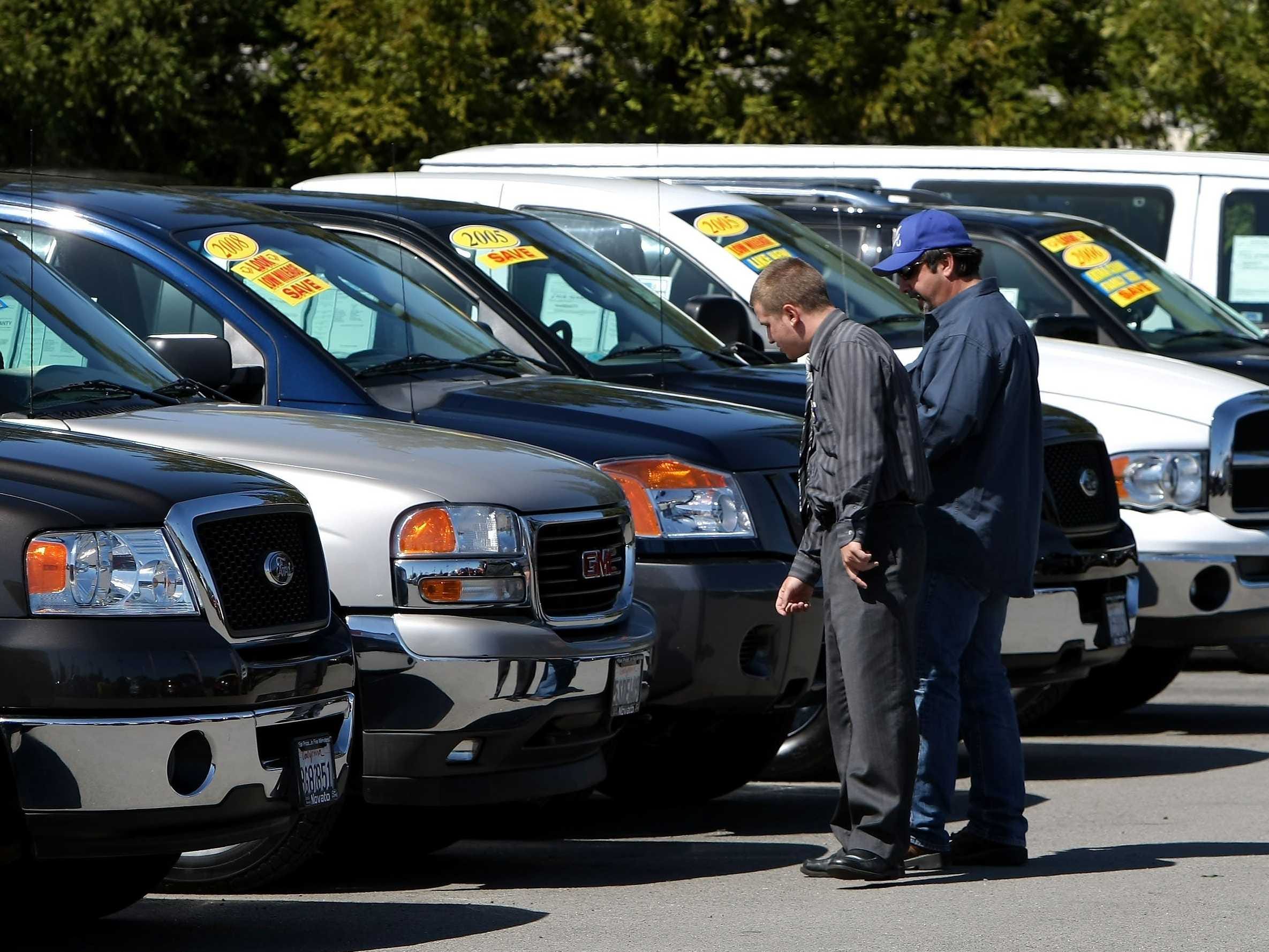 Justin Sullivan/Getty ImagesWhat you see online may be different than what is available on the lot.

“Don’t assume because you can configure a car online, that it actually exists,” Diaz said. Your dream car, with the exact options and colour you want, might not exist on a dealer lot near you.

“If a dealer doesn’t have what somebody wants, they’re going to try to sell what they have on the lot,” Diaz said. “They will put you behind the wheel of a car to test drive it immediately, whether it’s what you want or not.”

“Before you know it, you’re driving out of there with something that’s $US200 more a month than you wanted.”

If you can be flexible about which car you want, you’ll be happier in the end, Diaz said. And if you aren’t in a hurry, you might be able to order your dream car from the factory. He noted that ordering a new car can sometimes save you money.

Try to avoid spending all day at the dealership. Buying a new car is a big financial decision. It’s also an emotional one.

“People spend a lot of time in their cars,” Diaz said. “It becomes emotional because it becomes part of our identity.” This works against you in the car dealership, and salespeople know it.

“You forget that you can get up and walk away at any moment,” he said.

Less scrupulous car salespeople will “lose” the keys to your trade-in. They will claim they have to get the car you want from an offsite lot. Or they might be detailing the car they want to show you (Diaz said this could be dealer code for fixing a dent or ding).

The longer you stay at the dealership, the more likely you are to get tired and hungry. You just want to go home.

“If they wear you down enough, you’ll say yes to everything,” Diaz said. That’s when you are susceptible to an upsell you might regret later.

“If you want to make a good financial decision, leave your emotions out of it,” Diaz said. “Don’t be afraid to walk away and come back later, no matter how much you like the car.”

Look out for surprise provisions in leases. 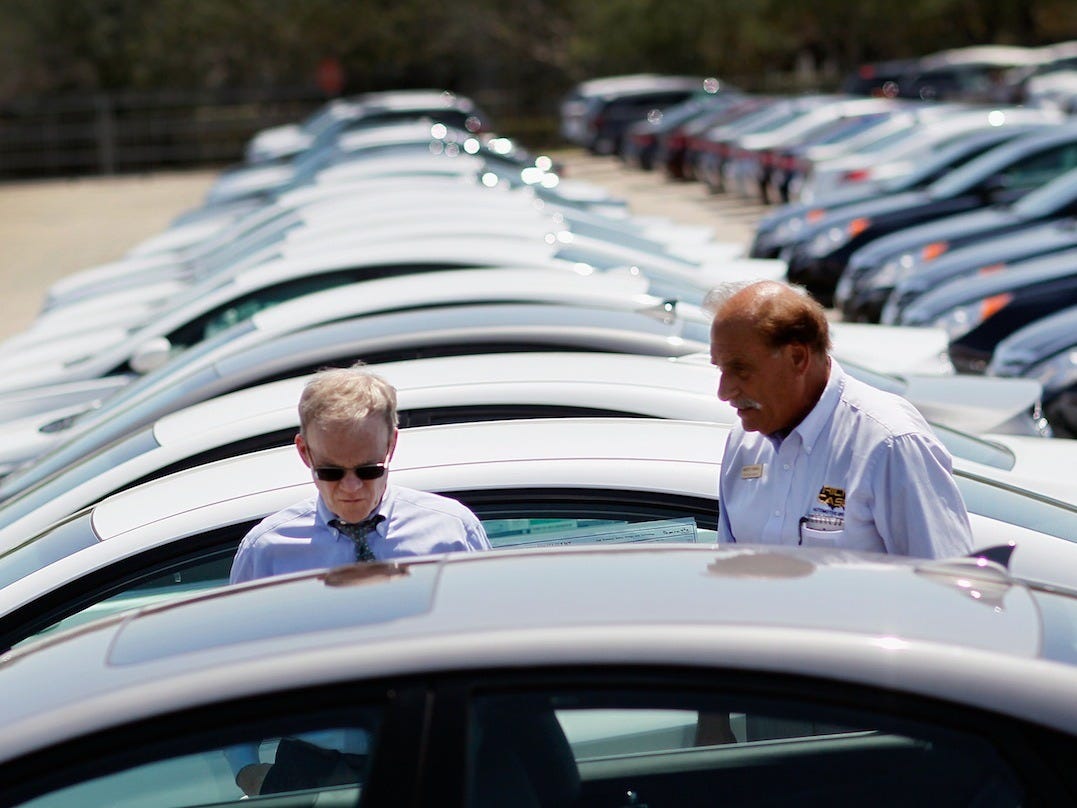 More Americans are leasing cars these days than ever before, recent surveys have shown.

Beware of a lease that seems too good to be true. When you see a lease advertised on TV with a low monthly payment, it’s probably a very low mileage lease with a high down payment, Diaz said.

Read the contract before you get excited about a lease. Go into the transaction with clear knowledge of what you’re getting into.

Do serious research to discover any hidden damage to the used car before signing. Justin Sullivan/Getty ImagesKnow your car’s history before you sign.

If you’re buying a used car, you need to do more than look under the hood.

Diaz suggested getting a Carfax report to find out about past bodywork or accidents. Find out if the car came from out of state and whether it spent time sitting in water after a flood. Damage that you can’t see can be a used car buying nightmare.

Look out for used car dealers who masquerade as private sellers. 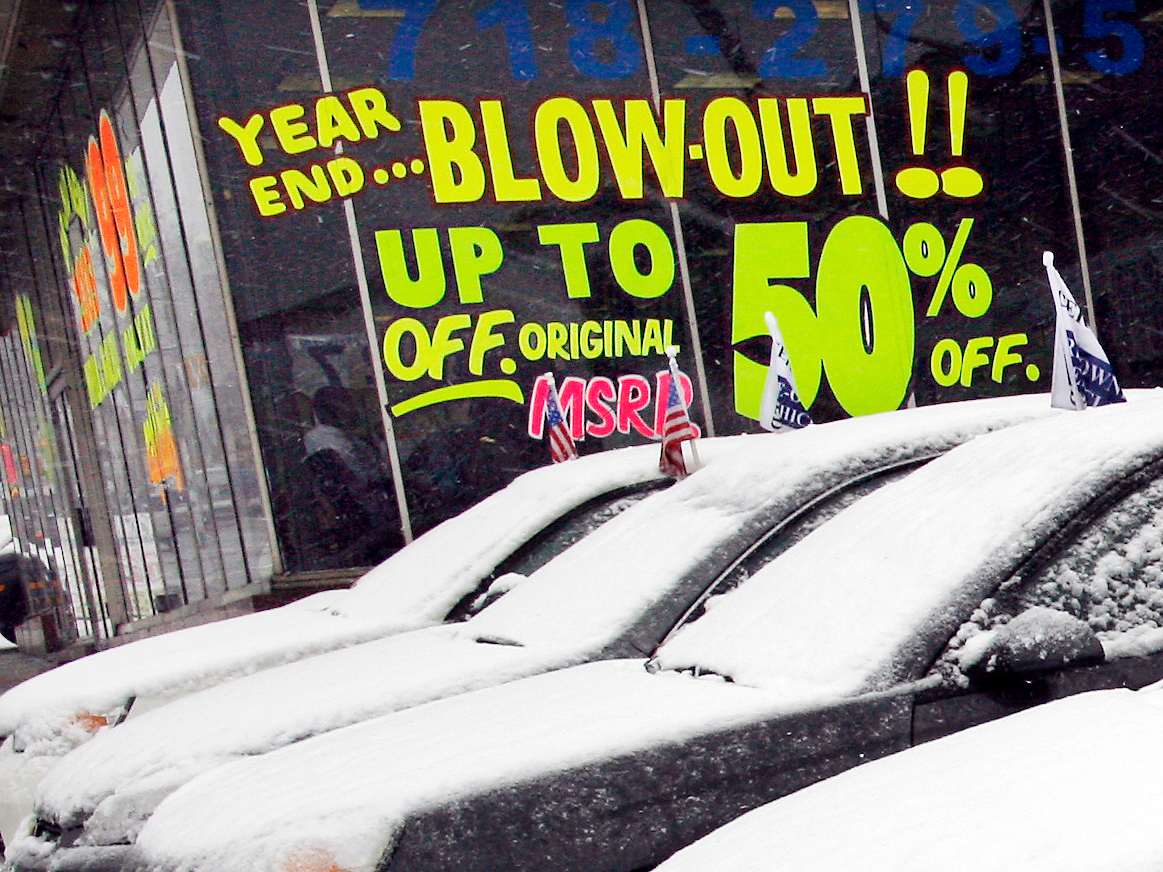 Shannon Stapleton/ReutersCars sit covered in snow at a dealership.

Some used car dealers pretend to be private sellers on Craigslist to avoid regulations. Diaz noted that you can’t complain about problems with these purchases because the dealers are usually fly-by-night operations that will disappear quickly.

His pro tip for used car buying: “If you’re going to buy a used car, try and buy it from a dealer that sells that same brand new.” In other words, don’t buy a used Toyota from a Honda dealership.

“If there’s warranty issues, you’ll be able to resolve them better,” he said.

Hold on to all the cards to preserve your leverage. 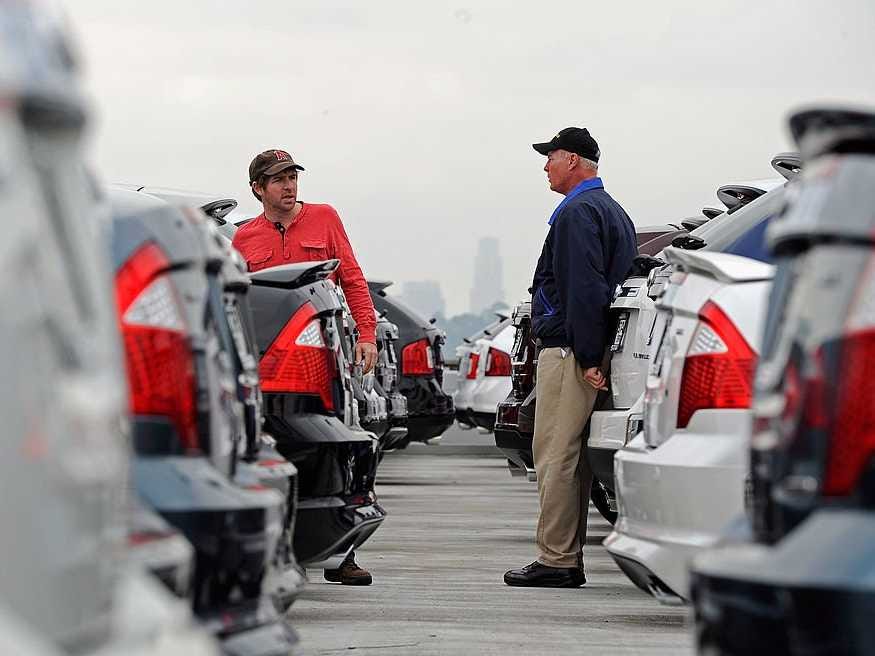 Diaz suggests that you leave your trade-in vehicle out of the equation to preserve your leverage.

Always be careful around the used car deal that’s too good to be true. Justin Sullivan/Getty ImagesIt’s not as good as it seems.

“Beware of something that sounds too good to be true,” Diaz said.

He noted that someone might advertise a car online for much less than its value, with a heartbreaking story about why they need to sell it quickly. Then you find out that the car is out of state. And you need to wire the person the money.

Don’t wire the person the money. If the deal seems to be too good to be true, it is probably a scam.