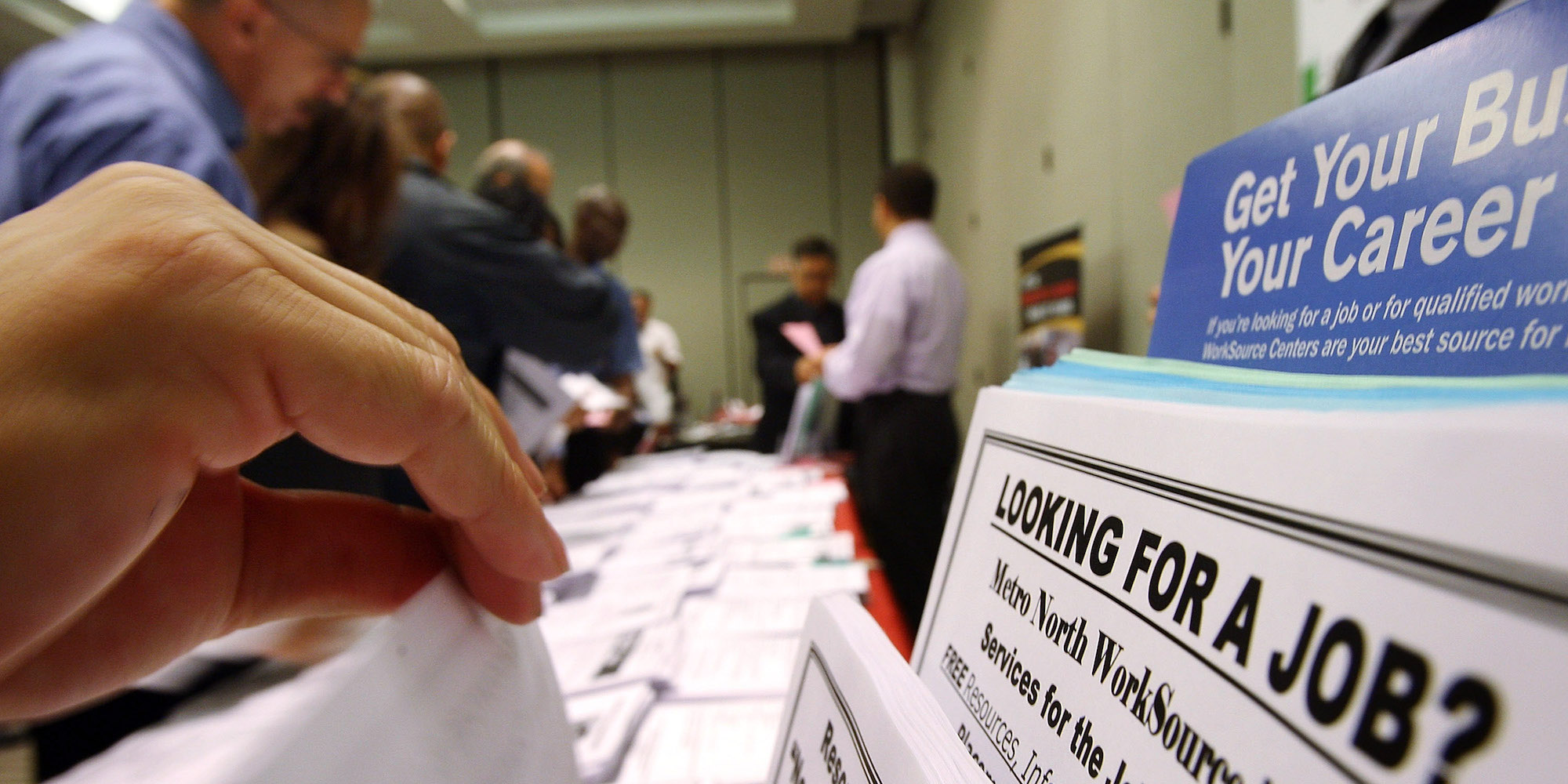 Coronavirus-induced layoffs appear to be slowing down as states weigh slowly reopening their economies.

US jobless claims totaled 3.8 million last week, the Labour Department said Thursday. The median economist estimate was for 3.5 million claims for the seven days that ended Saturday. The figure raises the six-week total to more than 30 million.

“The baseline has been moved so much,” Nick Bunker, an economist at Indeed, told Business Insider. “It’s still deeply disconcerting about the state of the labour market, but is just not feeling as terrifying as the numbers we’ve seen before.”


Read more:
A former software engineer quit a 6-figure job and started investing in real estate full time. He shares the popular 5-part strategy he’s leveraging and exactly what he looks for in a deal. 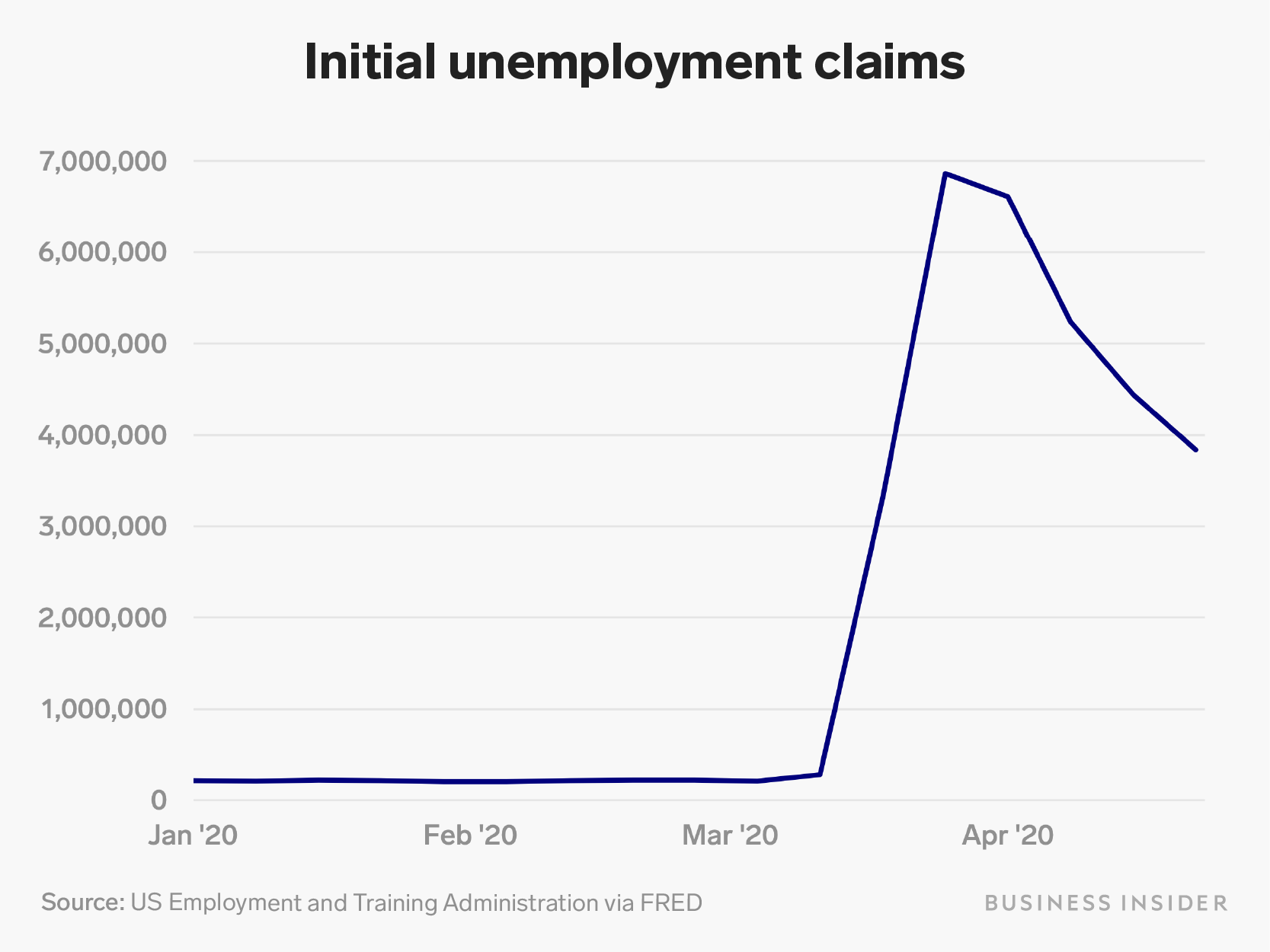 The weekly US jobless claims are the latest indicator of the economic pain wrought by the coronavirus pandemic since mid-March, when most of the country began entering lockdown to curb the spread of COVID-19.

A slew of economic data over the past month has shown the extent of the damage – retail sales, consumer sentiment, and factory output all posted historic falls. US gross domestic product, a measure of economic growth, fell 4.8% in the first quarter, the sharpest drop since the Great Recession.

There’s most likely worse to come – economists expect that the greatest economic contraction will hit in the second quarter, which consists of April, May, and June. And while unemployment claims have trended down over the past few weeks, continued elevated applications are worrisome.

“It’s a very uncomfortably large share of the workforce,” Michelle Meyer, the chief US economist at Bank of America, told Business Insider.

After last week’s unemployment claims report, one in six American workers had recently lost a job. If job losses continue, less than half of working Americans will have a paycheck in May, according to James Knightley, the chief international economist at ING.


Read more:
An investment chief who oversees $US29 billion explains why he’s bullish on a niche industry that’s ‘like the red blood cell of tech’ – and shares 2 stocks he’s buying

High weekly claims may be a product of backlogs in state unemployment offices. There have been many reports of state websites crashing because of overwhelming application volume.

Emma Gibson, 23, was the assistant audio engineer for “Sesame Street Live!” until mid-March, when the touring show was cancelled and all of the staff members were sent home. She applied for unemployment in her home state of Florida at the end of the month, she told Business Insider.

Her application was pending until this week, when she was finally able to log in and see that her claim was processed and verified, nearly a month after applying.

“That’s definitely been a struggle,” Gibson said. “When you apply it says it will take 72 hours to process, and it definitely took way longer than that.”

Elevated claims may also show that layoffs during the coronavirus pandemic have extended beyond the first sectors hit, such as entertainment, restaurants, and nonessential retail and services.

“We hoped claims would decay more quickly after the initial wave, on the grounds that the consumer-facing businesses forced to shut by the lockdowns could close only once,” wrote Ian Shepherdson, the chief economist at Pantheon Macroeconomics, in a Thursday note.

He added that the “wave of multi-million losses suggests that supply chains and business services firms are now laying off large numbers of people too.”

There is more help on the way that could alleviate unemployment claims. On Friday, President Donald Trump signed a $US484 billion coronavirus relief package into law. It includes an additional $US320 billion for the Paycheck Protection Program, which is intended to help small businesses keep their employees on payroll. The program was given more funding after it exhausted $US350 billion in just two weeks.


Read more:
A fund manager who’s beating the market by betting on tiny companies says coronavirus ‘turbocharged’ the trends driving his portfolio. He told us what they are, and the 3 stocks he’s most bullish on.

“Claims will be a good way of gauging whether or not the program is successful, whether or not businesses are actually adapting to behaviour or not,” Meyer said.

In addition, some states including Florida, South Carolina, and Georgia have started reopening parts of their economies this week, which could bring unemployment claims down as people return to work. Still, Meyer cautions that any progress will likely be slow as reopenings unfold.

Economists will continue to watch data to gauge the full extent of the downturn, assess how much stimulus from the federal government is helping, and weigh what shape an economic recovery might take.

Initial hopes were that the US would experience a so-called V-shaped recovery, characterised by a swift return to pre-coronavirus levels, but it now seems less likely that this will be the case. Instead, most expect a longer, slower recovery that takes a “U” shape.

While jobless claims have become a favoured snapshot of the labour market, it’s likely that they’re an undercount of true economic pain, Bunker of Indeed said. A study from the Economic Policy Institute released Tuesday found that for every 10 people who filed an unemployment claim, three to four tried but could not make it through the system, and two did not try to apply because it was too difficult.

Next week, the April employment report will shed more light on the coronavirus crisis’ impact on the labour market. Economists expect that the unemployment rate could spike above 20%, nearing the all-time high of 24.9% set during the Great Depression.

Read more: An expert tech investor beating 97% of his peers reveals the most important trends in his portfolio – and breaks out his top 3 stock picks for the next decade