A staggering number of Americans filed for unemployment insurance for a third week in a row as the coronavirus pandemic continues to inflict damage on the US labour market.

US weekly jobless claims were 6.6 million for the week ending April 4, the Labour Department reported on Thursday. It’s the third week in a row the report has shown an outsize number of claims. The figure brings the three-week total to roughly 16.8 million unemployment filings, a record for a period of that length.

The report is the latest data release showing the devastating impact of the coronavirus pandemic on the US economy. A record 10 million Americans filed for unemployment insurance benefits during the last two weeks of March. Layoffs first spiked after parts of the country imposed strict social-distancing guidelines, closing nonessential businesses and sending workers and students home. 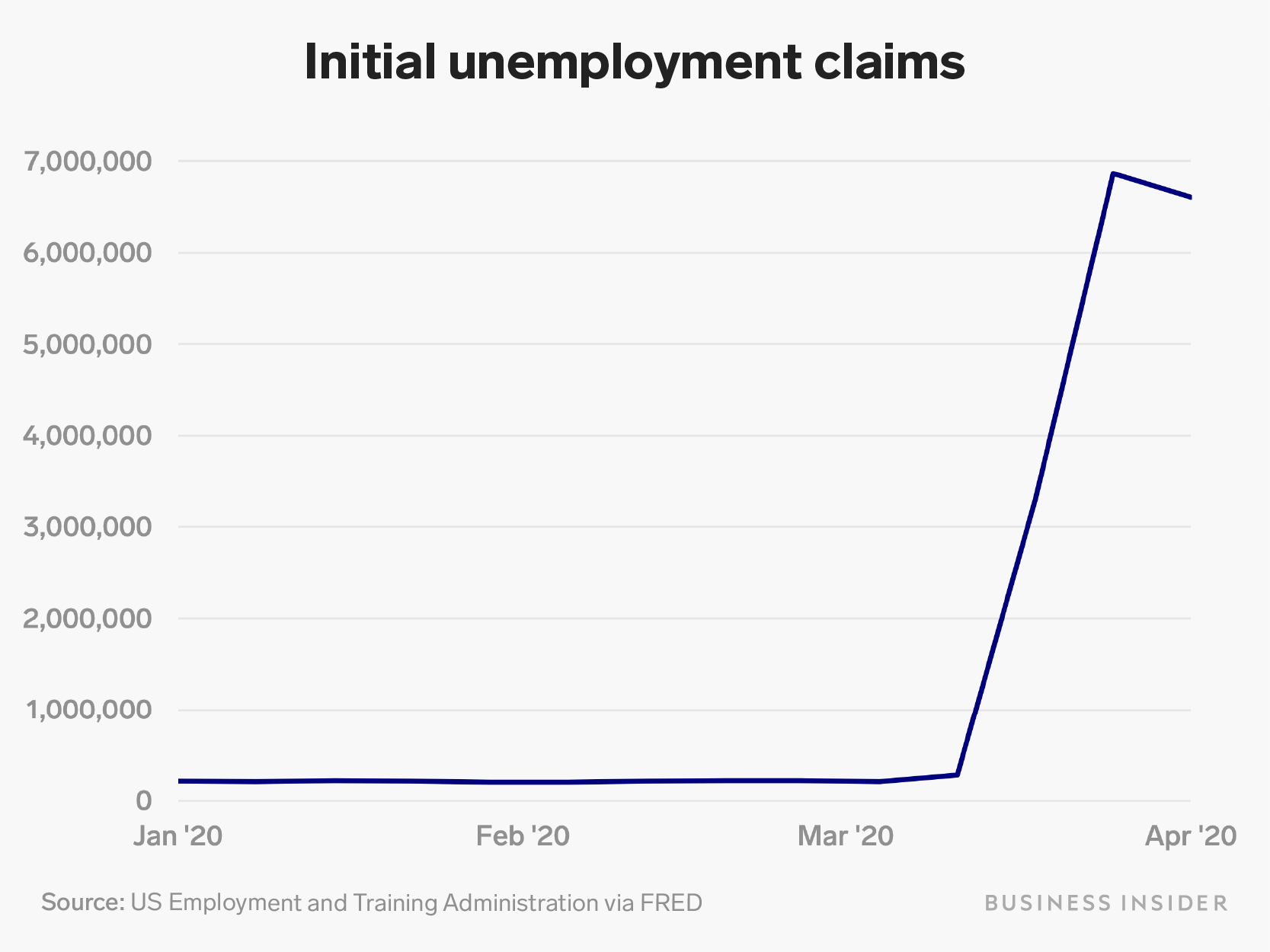 “It really is completely unprecedented,” Julia Pollak, a labour economist at ZipRecruiter, told Business Insider. As layoffs continue, a “cascade of economic pain” is rippling through the country, she said.


Read more:
Morgan Stanley handpicks the 18 best US stocks to buy now while they’re cheap to enjoy profits for years to come

On Friday, the March jobs report – which did not fully reflect job losses from the last two weeks of the month – showed that the US lost 701,000 jobs, far more than economists expected. It, too, was a stark sign that economic pain from the coronavirus crisis started much earlier than many thought.

The government has implemented relief efforts in response to the sudden economic hit. At the end of March, President Donald Trump enacted a $US2 trillion coronavirus relief bill to give aid to distressed businesses, send checks to many American households, and expand unemployment benefits.

More workers now qualify, the maximum number of weeks has been extended, and all those getting benefits will receive an extra $US600 per week through July. This “could contribute to new records being reached in coming weeks,” the Bank of America economists Alexander Lin and Michelle Meyer wrote in a Wednesday note.

Even though more people are now eligible for unemployment insurance, the weekly numbers may still be an undercount of the true economic pain. State systems have been overwhelmed by the spike in people filing each week and have reportedly struggled to keep up with the volume – websites have crashed, and people haven’t been able to get through on phone lines to file.

Those bottlenecks have delayed many claims. Paul Ianniello, 34, an actor in New York, was laid off from both of his survival jobs – one as an event staffer at the Nomad Hotel in Manhattan and another at the front desk of Orangetheory Fitness in Long Island City – in 12 hours.

He first tried to file an unemployment claim online during New York state’s open hours, Thursday through Saturday, he told Business Insider. But the website kept crashing, so he decided to wait for his turn on the next Tuesday. (The hours for filing are sorted alphabetically by last name.)


Read more:
‘The great unwind’: A hedge fund chief overseeing $US2 billion explains how a ripple effect could take down the housing market – and warns ‘we’re just at the beginning’

Ianniello was able to submit an initial claim – but he was told that for it to be approved, he needed to call back to speak with a specialist and provide extra information about his work history. It took him three days and nearly 440 phone calls to get through, he said.

He’s still waiting on additional paperwork needed to approve his claim, he said.

“I am just doing this blindly,” Ianniello said, adding that there’s “no indication of how long it might take” for his claim to be approved.

Waiting for the peak in claims

The US is bracing for an economic downturn, with most economists forecasting a sharp recession in the second quarter of the year. The next question economists are trying to tackle is when the surge of claims will peak.

Experts think it’s possible that record layoffs – and subsequent unemployment claims – will continue. The US might not have gotten to the bottom of layoffs, “just as we haven’t yet reached the peak of the pandemic curve,” Pollak said, adding that she still sees layoffs accelerating and job postings falling.

Once it peaks, economists will watch to see whether claims trend downward or whiplash if more layoffs come.


Read more:
C.T. Fitzpatrick has beaten 99% of his peers since the financial crisis. He shares his 4-part strategy for dominating a coronavirus-hit market – and names 6 companies that will benefit from the fallout.

Even if they do start to decline, unemployment claims likely won’t reach pre-coronavirus levels “anytime soon,” Michael Gapen, the chief US economist at Barclays, told Business Insider. Gapen’s current forecast is that claims will fall, reaching about 500,000 in May or June as the country gets the virus under control and reopens the economy, he said.

While the March jobs report was much worse than economists expected, many are worried about what the April report will show, as it will include the record jump in unemployment claims. The last two weeks of March alone could push the unemployment rate to near 15%, Gapen said.

The hope is that the jump in unemployment is a one-time event and that policy such as the coronavirus stimulus package will prevent a second surge that could come from businesses failing or a credit crunch, he said.

Still, the numbers are unprecedented, Gapen said. “We may come out of this realising the benefits of social safety nets and why we should be investing in them and keeping them up to date,” he said.

“I’m not sure that we’ve ever really thought of having 6 million unemployment claims in one week,” he said.


Read more:
Goldman’s credit-investing chief told us how investors can profit from the Fed’s mammoth stimulus – including a strategy that would reasonably earn 15% within a year