US weekly jobless claims hit 5.2 million, wiping out all jobs created since the Great Recession in just 4 weeks 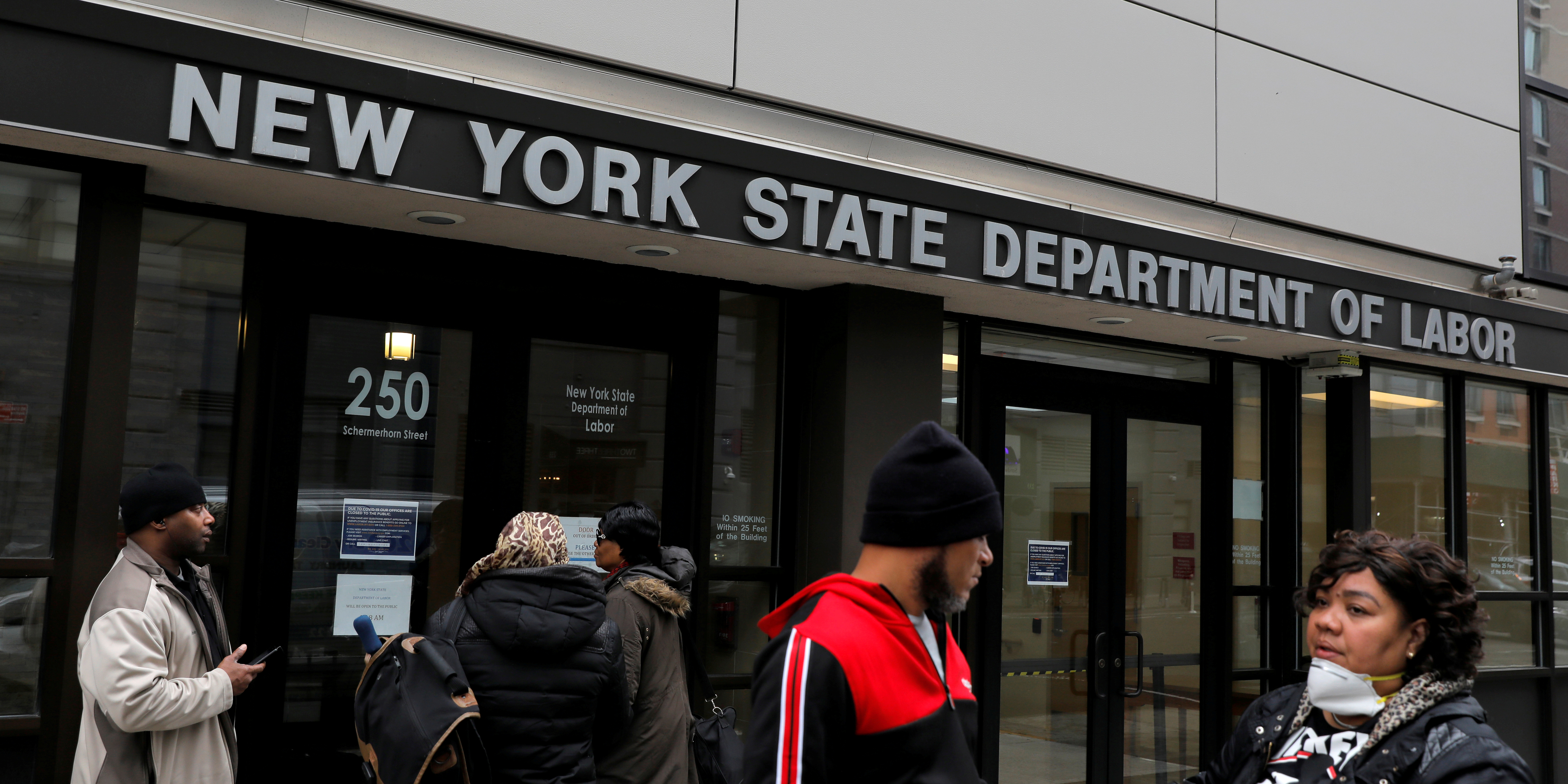 In just four weeks, coronavirus layoffs have erased more than a decade of record job creation.

US weekly jobless claims were at 5.2 million for the week ending April 11, the Labour Department said in a Thursday report. Claims declined slightly from the previous week, when 6.6 million Americans filed for unemployment insurance.

The report brought the four-week total of displaced American workers filing for unemployment to 22.03 million. It also means that coronavirus-related layoffs have effectively erased the 22 million jobs that the US economy added since the post-Great Recession recovery starting in mid-2009.

“We wiped that out so fast,” Heidi Shierholz, a senior economist at the Economic Policy Institute, told Business Insider. “It’s mind-boggling.”


Read more:
Chris Davis is so good at picking stocks he made clients $US1 billion on a single trade. He breaks down 3 stocks poised to deliver as coronavirus causes market mayhem 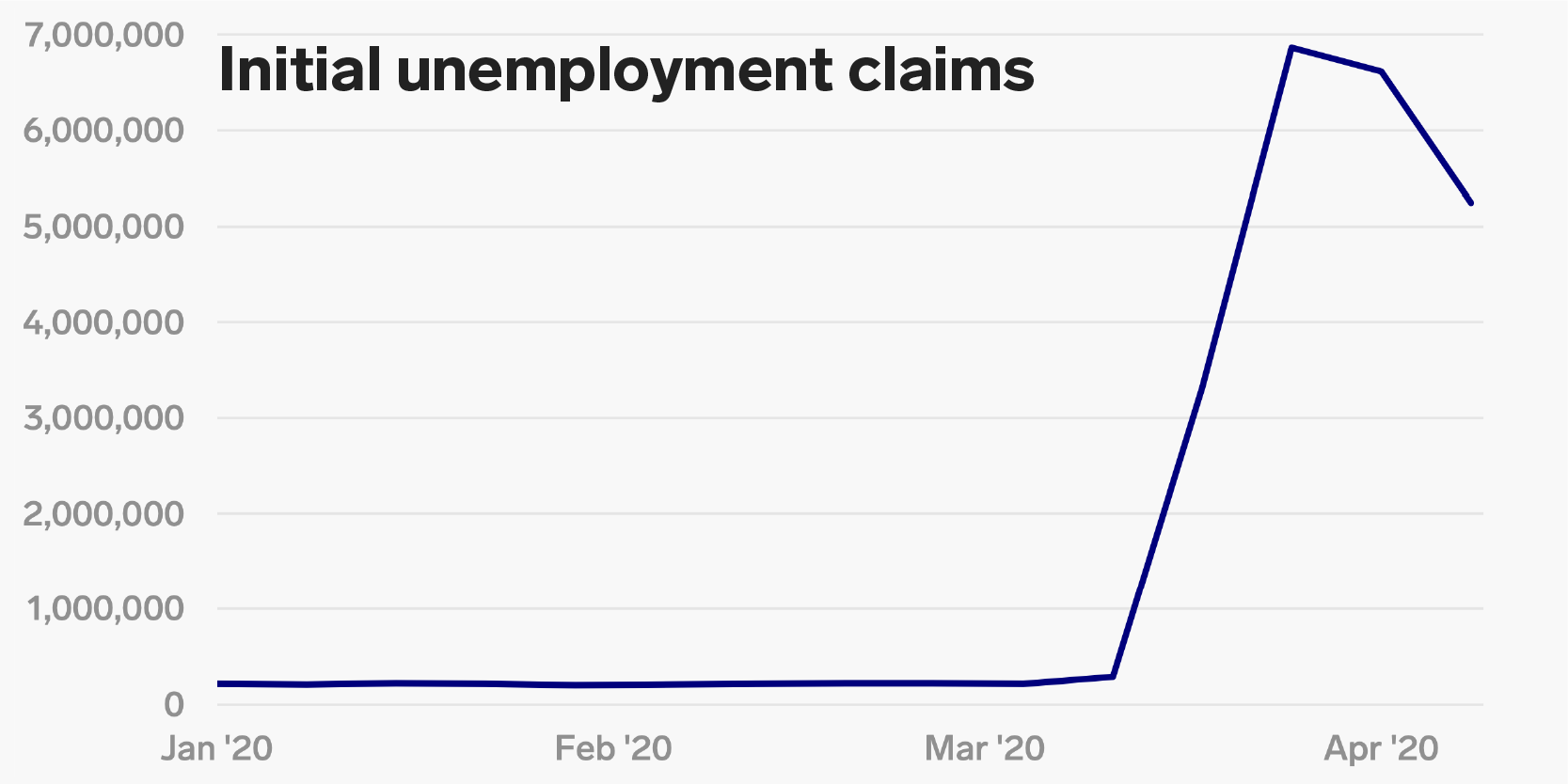 The Thursday report was the latest economic data confirming the coronavirus pandemic’s severe damage to the US economy. In addition to staggering record unemployment, consumer sentiment has plummeted, retail sales have posted a historic drop, and US factory output has declined the most since 1946.

The past month has been particularly painful as most states closed nonessential businesses and encouraged people to stay home to curb the spread of COVID-19, the illness caused by the virus.

Economic stimulus amid the coronavirus pandemic

There is some help on the way. At the end of March, President Donald Trump enacted a $US2.3 trillion coronavirus package, called the CARES Act, to provide relief to Americans and businesses affected by the crisis. People have started to receive $US1,200 stimulus checks, and small businesses have started applying for loans. Another round of stimulus is being considered.

The Federal Reserve has gone beyond its financial-crisis tool kit to provide sweeping aid to businesses as well as state and local governments. Fed Chairman Jerome Powell has said the central bank will continue to do whatever it takes to support the US economy during the crisis.


Read more:
Billionaire Chamath Palihapitiya has reaped a 997% return since 2011. He shares his 3-part strategy for today’s coronavirus-hit market – and outlines how he’s mining real estate for opportunities.

The expanded unemployment benefits from the CARES Act could boost jobless claims over the coming weeks because more people are now eligible, economists at Bank of America said. Additionally, claims may remain elevated as states continue to work through massive backlogs of people struggling to get through the system.

“It’s important to note that anyone can file an initial jobless claim even if they are not eligible, which can lead to an inflated number,” Bank of America economists led by Alexander Lin wrote in a Wednesday note. That means that the continued-claims figure is important to watch as well, as it represents those actually receiving benefits.

Layoffs are spreading to new industries

Still, the weekly jobless-claims data offers “the best, and almost real-time, guide to the big picture,” Ian Shepherdson, the chief economist at Pantheon Macroeconomics, wrote in a Thursday note.

Last week’s report showed that people in industries even outside leisure, service, the arts, and restaurants had started filing unemployment claims – filings were also seen in the manufacturing, healthcare, construction, transportation, and warehousing sectors.

That was “a little disturbing,” Daniel Alpert, a creator of the US Private Sector Job Quality Index, told Business Insider, as it indicates that layoffs are moving beyond frontline workers immediately cut from jobs at businesses deemed nonessential.

This could also be partly because of the slow rollout of the Small Business Administration’s $US350 billion Paycheck Protection Program that’s giving businesses funding for payroll costs to curb layoffs. There have been issues with the program, including reports of a difficult and lengthy application process and technical problems with the system, including a crashing website.

What economists are watching next

Economists will be looking for a trend of declining claims over the next few weeks as the coronavirus outbreak subsides and governments weigh reopening the economy. The hope is that claims will continue to decrease as layoffs eventually taper off.

Still, the swiftness of record-breaking claims figures has been eye-opening. Economists had forecast that claims would peak at about 20 million at the end of the month, a milestone reached much sooner. Job losses of that level could push the unemployment rate to 15% or higher.

Unemployment filings are only part of the story – they could be counterbalanced by hiring numbers, or how many people quit their jobs. But data has shown that job openings are falling, so any offset would likely be small.

And even if the overall trend of unemployment claims declines, economists are still expecting millions of filings each week – higher than even the worst week of jobless claims during the Great Recession.

“We still have millions to go over the next couple of weeks,” Shierholz said. “But I do think it will start tapering off.”


Read more:
450 flips with no prior experience: Here’s the 3-part real-estate-investing strategy a former Microsoft engineer is using to generate ‘piles of cash’ in a market that’s nearing recession