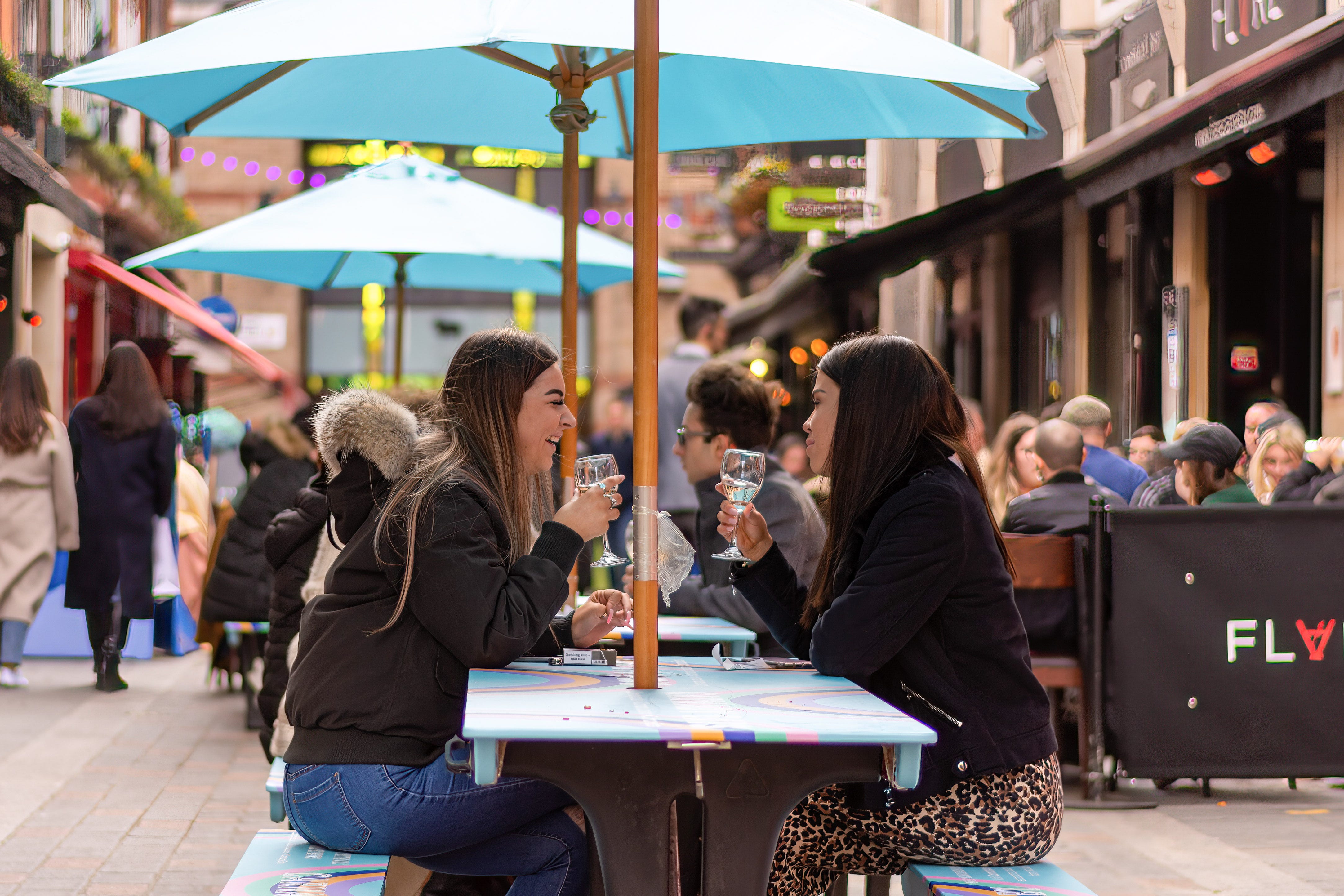 Pietro Recchia/SOPA Images/LightRocket/Getty ImagesPeople in England flock back to pubs and restaurants as lockdown restrictions were eased on April 12, 2021.

Countries that have vaccinated more than a third of their populations are now taking huge leaps toward normal life.

The UK plans to remove all social distancing restrictions by June 21 now that nearly half its population has received shots. On April 30, the nation will experiment with its first nightclub opening in more than a year: A Liverpool warehouse is set to host 3,000 club-goers who test negative for the virus.

US vaccinations trail closely behind – around 40% of the country has received at least one vaccine dose so far. For the most part, businesses are already open in all 50 states, and 13 states have recently lifted their mask mandates.

To some extent, rolling back restrictions is a natural test of whether vaccines prevent coronavirus infections, hospitalizations, and deaths outside clinical trials. But scientists worry that countries with large vaccine rollouts could be lulled into a false sense of security.

“The worst is probably behind us, but I don’t want to suggest that let’s now sit back, relax, and enjoy life, and it’s all going to be fine,” David Dowdy, an epidemiologist at Johns Hopkins Bloomberg School of Public Health, told Insider. “We do still need to maintain some level of vigilance because if the virus has taught us one thing, it’s that it’s difficult to predict the future.”

Two factors, in particular, could hinder progress in the US and UK: the emergence of more contagious variants and vaccine skepticism.

The University of Washington’s Institute for Health Metrics and Evaluation predicts that the US could see an additional 60,000 deaths by August 1 – assuming variants continue to spread and vaccinated people start to behave normally, forgoing masks and social distancing. Under this “worst-case scenario,” daily coronavirus cases could also plateau over the next four months.

A March 30 model from Imperial College London similarly estimates that the UK could see an additional 15,700 deaths by June if the country proceeds with its reopening plan.

The US and UK probably haven’t reached herd immunity yet 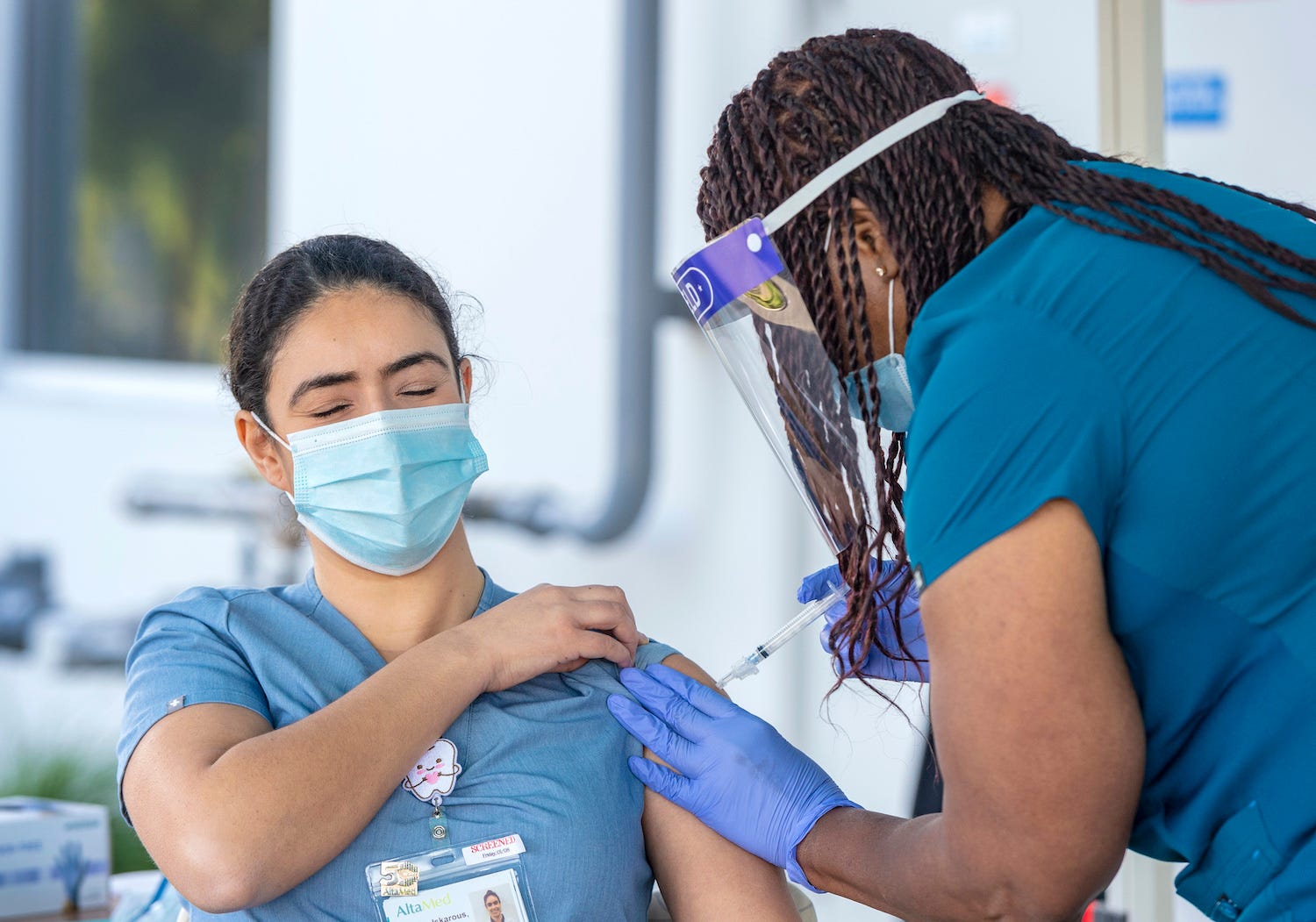 It’s not clear exactly what share of a nation’s population needs to be vaccinated to achieve herd immunity – the threshold beyond which the virus can’t pass easily from person to person – but experts generally estimate that it’s at least 70%.

Only one large country, Israel, is probably near that goal. Around 62% of Israel’s population has been vaccinated so far.

Already, Israel’s cases have fallen 94% since it started vaccinating people in December – even as the country lifted lockdown restrictions. As of last Sunday, people in Israel don’t need to wear masks outdoors anymore and all primary school students can return to in-person learning.

But scientists warn that the US and UK likely haven’t crossed the herd immunity threshold yet.

While daily coronavirus cases are falling in the UK and have remained relatively flat in the US, experts worry that rolling back restrictions could reverse some of these gains.

“Part of the reason that we’re not seeing a spike is still that people are not just going back to the way things were before,” Dowdy said. “And if we remove that effect, we will start to see cases go back up right now.”

In the US, average daily cases are still comparable to those recorded last summer.

“We’re having between 60,000 and 70,000 new infections per day and it would really, I think, not be prudent at all to declare victory prematurely and pull back,” Dr. Anthony Fauci, director of the US National Institute of Allergy and Infectious Diseases, told CBS’ “Face the Nation” on Sunday. 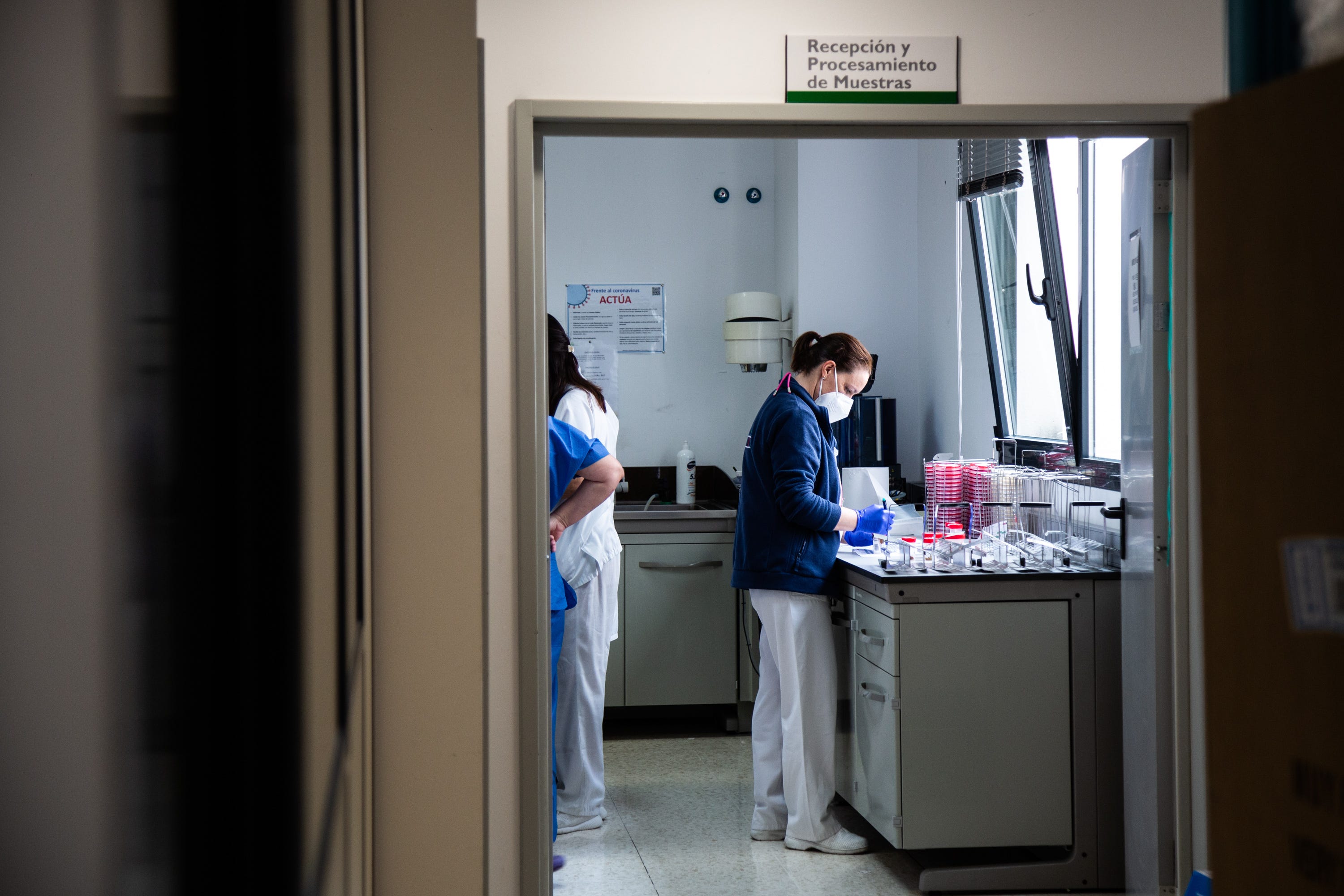 Javier Pulpo/Europa Press/Getty ImagesResearchers sequence coronavirus samples at the microbiology laboratory of the University Hospital of Badajoz in Spain on April 15, 2021.

Many scientists caution against lifting mask or social distancing guidelines before nations understand the full threat of coronavirus variants.

In Chile, for instance, 40% of the population has been vaccinated, but average daily coronavirus cases there have more than doubled in the last two months. Scientists attribute this surge, in part, to the spread of P.1 – a variant first discovered in Brazil that seems to partially evade immunity from vaccines or previous infectious.

Studies show that vaccines from Pfizer, Moderna, and Johnson & Johnson protect people from B.1.1.7 – now the dominant strain in the US – but are less effective against P.1 and B.1.351 (a variant first identified in South Africa). AstraZeneca’s vaccine – which has been authorized in more than 130 countries, including the UK – seems to protect people from B.1.1.7 and P.1, but is less effective against B.1.351.

Scientists have also spotted variants in California that appear to be more transmissible than the virus’ original strain and could potentially resist antibodies from vaccines, according to a new study.

“Let’s say we reach herd immunity next year – it may need to be a constant battle,” he said. “You have to keep maintaining herd immunity in the population by continuously getting people vaccinated.” 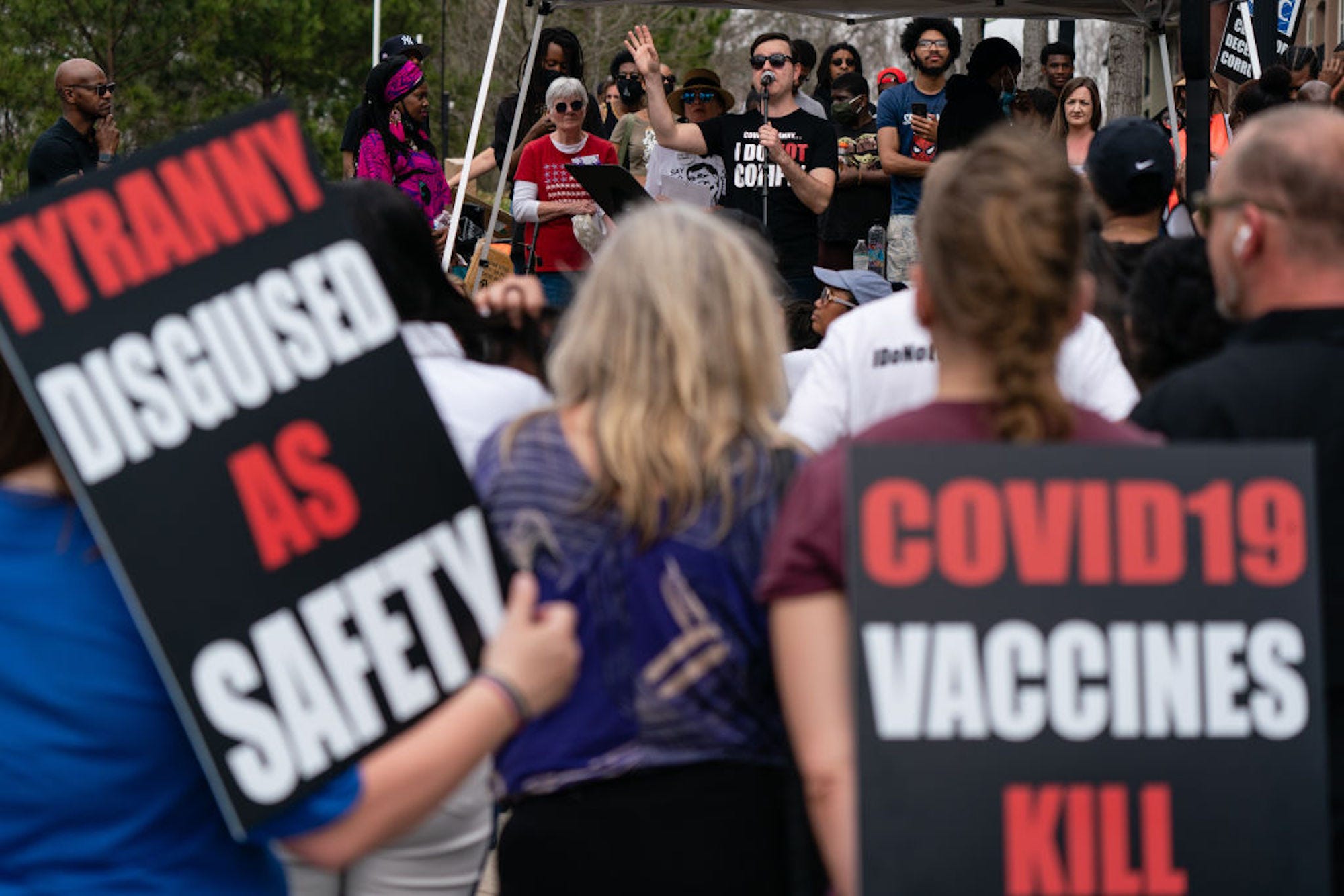 Elijah Nouvelage/Getty ImagesA protest against masks, vaccines, and vaccine passports outside the CDC headquarters in Atlanta, Georgia on March 13, 2021.

The US is currently vaccinating around 3 million people per day, on average. Fauci has said the nation will need to keep up that pace to prevent another surge.

But maintaining the current rate of vaccinations is going to be a challenge, Dowdy added.

“The people who haven’t been vaccinated by now generally are, in many cases, people who don’t want to be vaccinated or have some concerns about being vaccinated,” he said.

A recent poll from Monmouth University found that 1 in 5 Americans still aren’t willing to get a coronavirus vaccine. That’s compared to three-quarters of people in the UK who say they’re “very likely” to get vaccinated, according to a February Oxford University survey.

“You can vaccinate 50% of the population, but if it’s the wrong 50% – the 50% who are at the lowest risk of getting COVID to start with – then it doesn’t mean that you magically then cross a threshold,” Dowdy said. “The key is to get those numbers high enough so that even in the populations that are at highest risk of getting infection, you’re having enough vaccination to make a difference.”

For now, at least half the people in the US and UK still haven’t had their shots. And it could be several months, at the earliest, before coronavirus vaccines are authorized for children – which make up roughly 20% of the populations in the UK and US.

Until then, scientists said, it’s important to maintain mask and social distancing guidelines.