Baderkhan Ahmad/APA US military convoy near the northern Syrian town of Qamishli on October 26, 2019.

Recently, four US troops were injured in a type of international drag race with Russian forces in Syria. Incidents like this bring back to the forefront an increasingly and dangerously overlooked question: What are US troops doing in Syria anyway?

For nearly a decade, Washington and its allies engaged in indirect efforts to topple the government in Damascus. So far their biggest accomplishment seems to be the extension of Syria’s civil war and the imposition of a crushing sanctions regime, which in turn creates room for chaos where radical and violent nonstate actors can thrive.

The dismal state of Washington-Moscow relations cannot be used to justify this continued partial occupation of Syrian territory either.

Even if one believes that it is important to compete with Russia in a game of great-power competition, the US presence in Syria works against this goal, failing to realise that there’s no prize in Syria worth fighting Russians over. 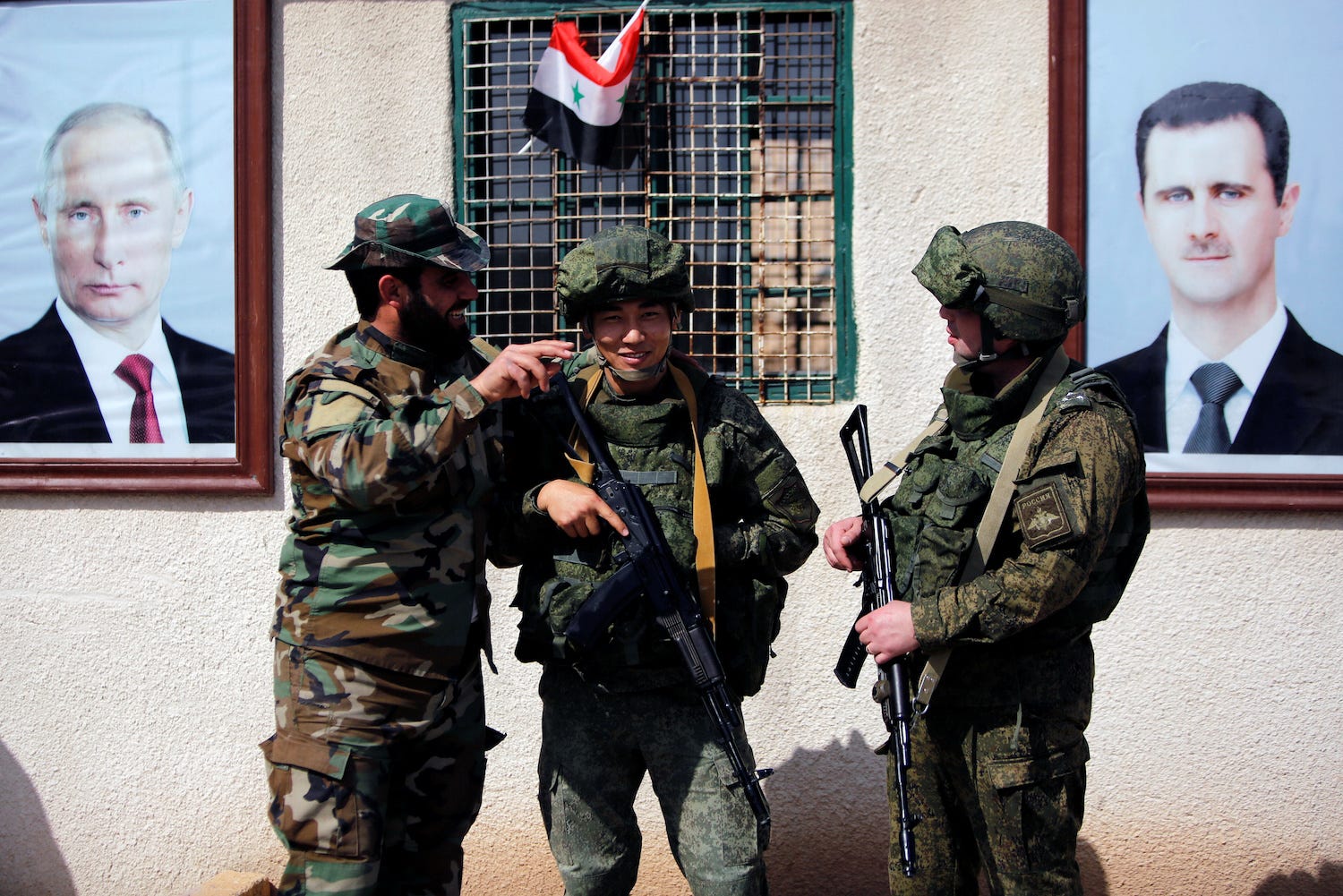 Omar Sanadiki/ReutersSyrian and Russian soldiers at a checkpoint near Wafideen camp in Damascus in 2018.

Instead, the small US military presence offers up a tripwire deterrence force, risking the lives of US troops to maintain remote areas of Syria as some kind of bargaining chip for a grand peace deal that shows no signs of materialising.

These units are both too small to be effective in accomplishing an attainable military goal and too active to be simply peacekeepers â€” in short, this is a recipe for overextension.

The dangers of US forces being sucked into the next round of combat in northern Syria are very real. It’s even possible US troops would be fighting alongside Turkey, a country whose reliability and even desirability as an US ally at the moment are questionable.

And what is the net strategic gain the US has from its risky commitment in Syria? Ostensibly, US troops were sent to Syria for operations against the Islamic State, but ISIS’ so-called caliphate is destroyed and its scattered adherents lack the infrastructure and organisation that once made the group such an international menace.

Today, the best hope for dealing with the remnants is a general end to the Syrian civil war â€” something not helped by the US presence that prevents Damascus from reunifying the country. Even beyond the military dimension, tightening sanctions on Damascus hinder reconstruction efforts essential to recovering from the civil war. 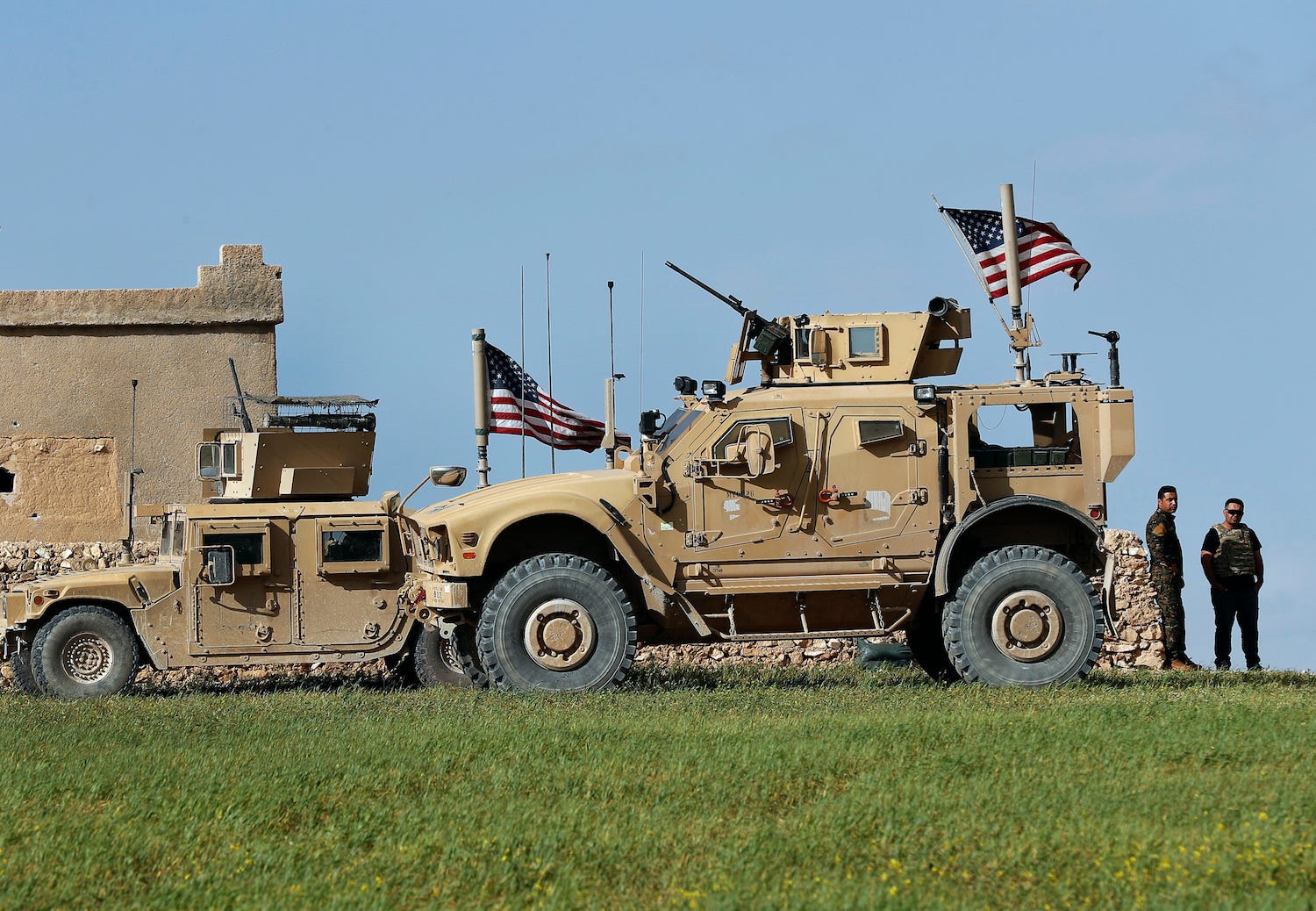 AP Photo/Hussein MallaA US-backed Syrian fighter next at a US outpost north of the town of Manbij in 2018.

There is also that recent oil deal with the Kurds. But it must be remembered that ensuring the safety of such a deal in the oil-producing territory of eastern Syria requires a permanent US presence in the region.

Already, the long-term US presence in eastern Syria wobbles on unsteady foundations. It’s certainly not worth a military mission for access to oil reserves that are not particularly impressive nor a significant percentage of the global or even regional market. Even the strategic necessity of the Middle East for energy production is increasingly questionable these days.

The US’s position in the world would be stronger without all these apparent low-stakes, high-danger deployments. The ability of the US to adapt its grand strategy to a changing world would be increased, rather than decreased, by keeping US forces out of quagmires far away from the country’s vital national interests.

US forces should be withdrawn from Syria immediately before an unexpected yet foreseeable disaster distorts the long-term view of its policymakers and plunges us into further undesirable interventions.

Christopher Mott is an international-relations specialist and author of “The Formless Empire: A Short History of Diplomacy and Warfare in Central Asia.”