On the eve of Thanksgiving, the US recorded its highest single-day coronavirus death toll since May — and the timing could not be worse 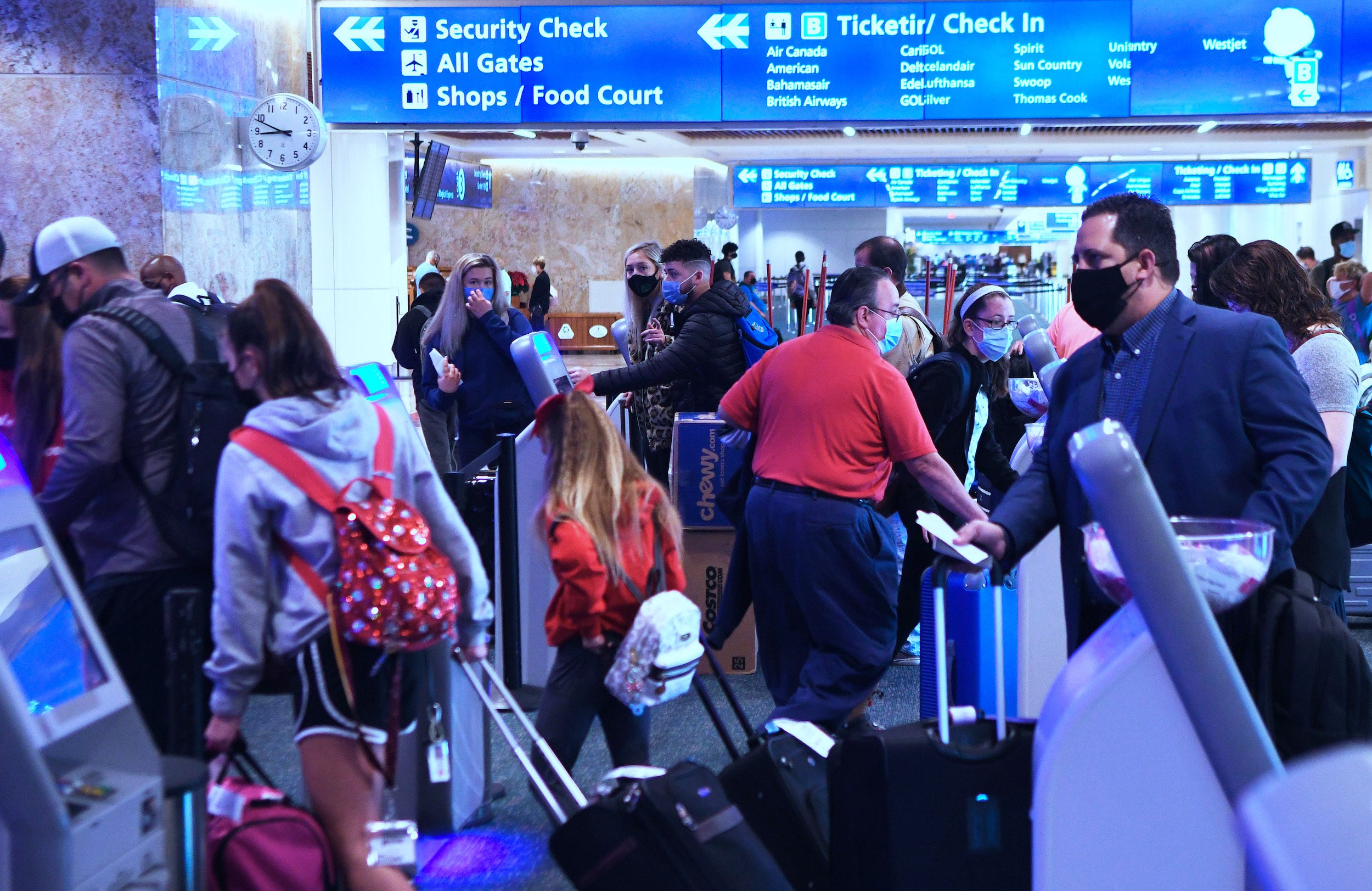 Thanksgiving could not be better designed to be a coronavirus superspreading event.

Already, COVID-19 cases, deaths, and hospitalizations are skyrocketing around the US, approaching a new peak. Thanksgiving will likely accelerate that uptick, allowing the virus to enter millions of densely-packed and insufficiently-ventilated homes.

As of Thursday, at least 12.8 million Americans have tested positive for coronavirus, according to Johns Hopkins University. The COVID Tracking Project reported that nearly 90,000 people in the US were hospitalized with COVID-19 as of Wednesday, with hospitalizations breaking national records daily for the past 16 days.

More than 262,400 Americans have died of COVID-19, and more than 2,300 of them died on Wednesday alone. This week marks the first time the US has surpassed 2,000 daily deaths since early May, per The New York Times.

It’s been more than 10 months since the first coronavirus case was detected in the US, but these grim milestones are becoming more frequent.

Still, President Donald Trump, who tested positive in October, has repeatedly downplayed the threat of the virus, insisting that the country is “rounding the turn” and that COVID-19 will “just disappear.” The White House is even planning indoor holiday parties over Christmas and Hanukkah,officials told Axios.

The opportunity to ‘translocate disease’ across the US 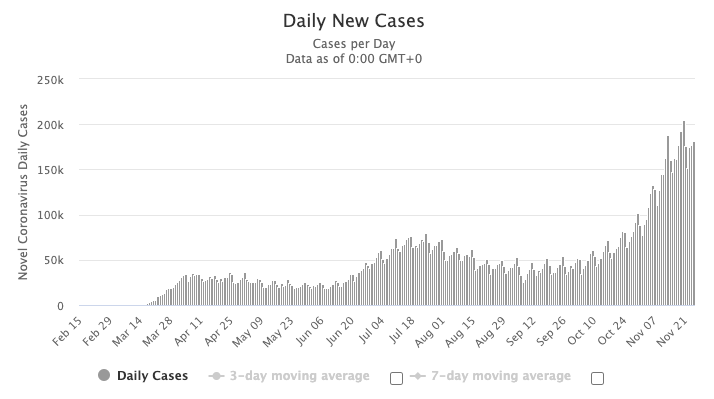 WorldometersDaily new coronavirus cases in the US.

Health experts have urged Americans to reimagine Thanksgiving and the 2020 holiday season and avoid situations where they can contract or transmit the virus. The Centres for Disease Control and Prevention has asked people to avoid mixing households and to hold small, brief, and masked gatherings that are outdoors, if possible.

Travel has been a major point of concern with the CDC categorising medium-sized events with people travelling from outside the area as “higher-risk.”

“Right now, as we’re seeing exponential growth in cases and the opportunity to translocate disease or infection from one part of the country to another leads to our recommendation to avoid travel at this time,” Dr. Henry Walke, the COVID-19 incident manager at the CDC, told reporters on November 19.

One in 3 Americans aren’t changing their plans 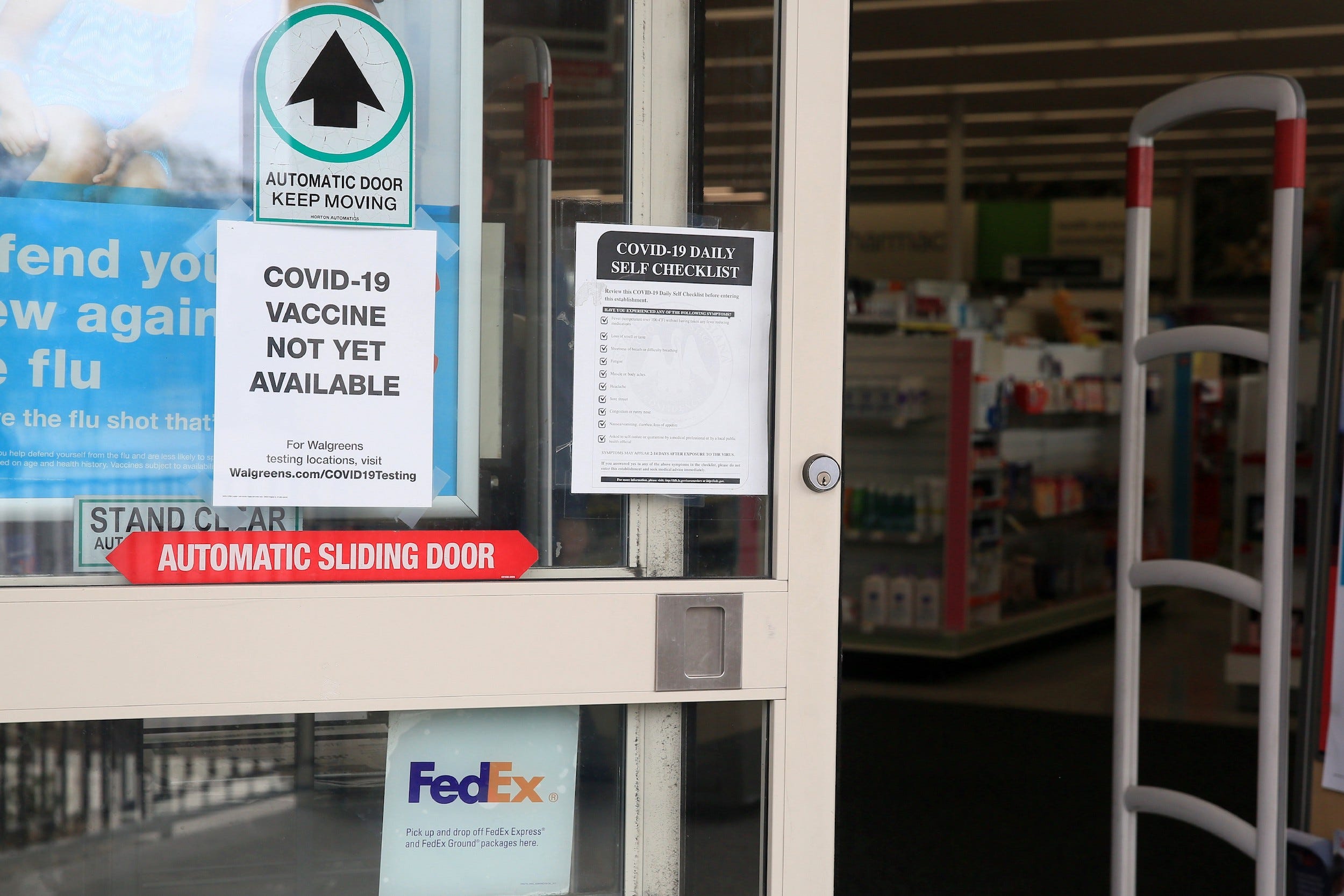 Xinhua/Wei Lan via Getty ImagesA notice telling people that a COVID-19 vaccine is not yet available is seen on the door of a pharmacy in New Orleans, Louisiana on November 25, 2020.

“We all know how difficult that is because this is such a beautiful, traditional holiday. But by making that sacrifice, you’re going to prevent people from getting infected,” said Fauci, whose own daughters declined to travel home for Thanksgiving in a bid to protect their 79-year-old father.

He added: “If we can just hang in there a bit longer and continue to do the simple mitigation things that we’re talking about all the time â€” the masks, the distancing, the avoiding crowds, particularly indoors. If we do those things, we’re going to get through it.”

Still, not everyone has heeded this advice. An Insider poll of 1,110 people in the US revealed that nearly one in three people surveyed â€” or 37% â€” are not doing things differently this year. And 57% of respondents said they plan to bring different households together around their dinner tables in the absence of masks and open windows.

Airports are also seeing a surge in travellers. The Transportation Security Administration reported screening more than 1 million passengers last Friday and then again on Sunday and on Wednesday. These have been the biggest days for air travel since March 16, per the agency’s logs.

Daily COVID-19 deaths could double in the next 10 days

Meanwhile, the CDC published a forecast on Wednesday projecting an increase in coronavirus deaths over the next four weeks, with between 10,600 and 21,400 new deaths likely to be reported the week of December 19. 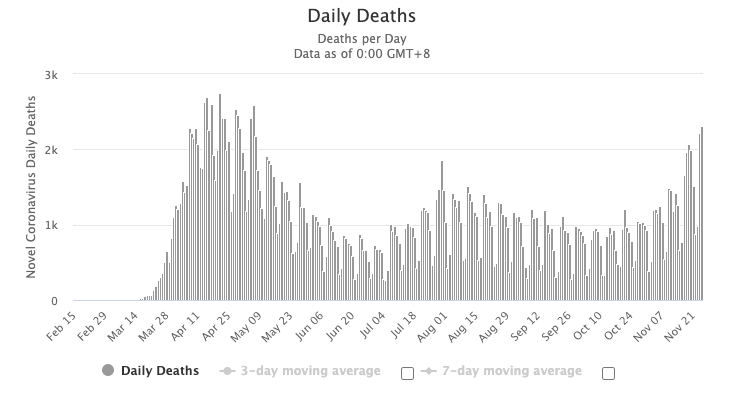 WorldometersDaily new COVID-19 deaths in the US.

Dr. Jonathan Reiner, a professor of medicine at George Washington University, predicted to CNN that daily recorded deaths will not simply jump but double in the coming 10 days. There’s about a two-week lag between people getting infected and winding up in hospitals, with symptoms showing up around five to seven days in.

And as it gets colder and people move indoors, experts are concerned about a “humanitarian crisis,” Dr. John Brownstein from Boston Children’s Hospital, told ABC News.

“If we layer in travel and large indoor gatherings which we know are drivers of transmission, we expect to see a massive surge on top of an already dire situation,” he said.

Michael Osterholm, the director of the Centre for Infectious Disease Research and Policy at the University of Minnesota, echoed that sentiment.

“I worry that the Thanksgiving Day surge will then just add into what will become the Christmas surge, which will then make this one seem as if it wasn’t so bad,” he told CNN, adding, “We have to understand we’re in a very dangerous place. People have to stop swapping air. It’s just that simple.” 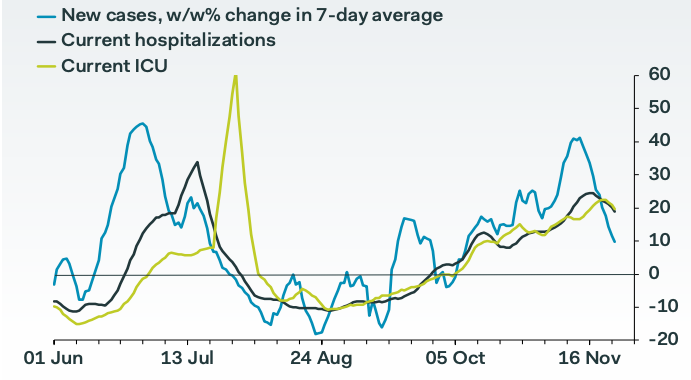 Pantheon MacroeconomicsHospitalisation and death rates reflect an increase in cases in the US.

Already, medical resources across the country are being stretched thin, with nurses and doctors working around the clock and risking exposure to the coronavirus themselves.

Dr. Joseph Varon, chief of staff at United Memorial Medical Centre in Houston, Texas, told CNN that the pandemic has forced him to work 251 days in a row. His hospital is at maximum capacity, and scrambling to open two new wings in preparation for an influx of patients after Thanksgiving.

Varon described treating people amid the pandemic as “a never-ending story,” and warned of a rapidly deteriorating situation nationwide, without proper precautions.

“My concerns for the next six to 12 weeks is that if we don’t do things right, America is going to see the darkest days in modern American medical history,” he said.

Jim Edwards contributed to this report.