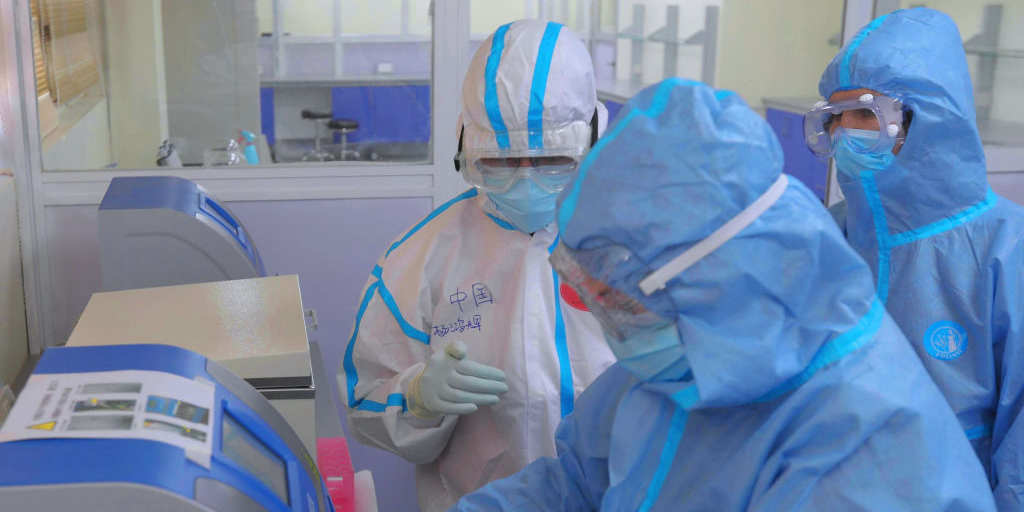 Amid questions about the origin of the novel coronavirus outbreak, newly reported diplomatic cables showed that US officials had sounded the alarm about possible safety breaches at a lab studying coronaviruses in animals in Wuhan, China.

In the cables, obtained by the Washington Post national-security columnist Josh Rogin, US officials raised concerns about safety at the Wuhan Institute of Virology in 2018, two years before the novel coronavirus outbreak.

The lab, which holds a level-four biosafety research certification, the highest possible rating, was conducting research on coronaviruses in bats.

After multiple visits to the lab from a US diplomat in Wuhan and a science diplomat at the US Embassy in Beijing in early 2018, the officials became concerned about the safety of the research and sent two “sensitive but unclassified” cables back to Washington, DC, asking for assistance to help the lab tighten its safety protocols.

According to The Post, a cable dated January 19, 2018, said that “during interactions with scientists at the WIV laboratory, they noted the new lab has a serious shortage of appropriately trained technicians and investigators needed to safely operate this high-containment laboratory.”

The Post said that diplomats and scientists were particularly worried about the safety of the lab’s research on the transmission of bat coronaviruses and warned that sloppy safety protocols for handling contagious viruses in the lab “represented a risk of a new SARS-like pandemic.”

To be clear, there is no evidence to suggest that the novel coronavirus was created in a lab as a bioweapon. But the newly reported diplomatic cables shine a light on a theory that the virus may have leaked out of the lab by accident or through biowaste, infecting the surrounding population.

Like the severe acute respiratory syndrome outbreak that originated in southern China in 2002, the novel coronavirus outbreak began with animal-to-human transmission.

The Wuhan Institute of Virology had previously published research locating the cluster of bats believed to have transmitted SARS to humans. And the lab’s researchers were the first to report, in February, that the novel coronavirus originated in bats.

In the cable, the diplomats said the researchers’ work “strongly suggests that SARS-like coronaviruses from bats can be transmitted to humans to cause SARS-like diseases,” adding that “from a public health perspective, this makes the continued surveillance of SARS-like coronaviruses in bats and study of the animal-human interface critical to future emerging coronavirus outbreak prediction and prevention.”

While such research is important to fully understand animal-to-human transmission of coronaviruses, the cable raised concerns that the highly dangerous research could cause more harm than good without immediate intervention to improve the lab’s safety protocols.

“The cable was a warning shot,” a US official told The Post. “They were begging people to pay attention to what was going on.”

As Rogin noted, researchers have previously raised concerns about the safety of so-called gain-of-function studies that increase the strength or contagion of dangerous pathogens and raise the risk of disease outbreaks.

While the Chinese government has said the novel coronavirus was first transmitted to humans in a wet market in Wuhan, there are still many questions about the virus’ origins. Those have been compounded by the government’s obfuscations, lack of transparency with other nations, restrictions on research about the virus, and silencing of those who first spoke out about it.

Chinese diplomats have inflamed tensions with the US and spread conspiracy theories of their own, including one claiming that the US Army brought the coronavirus to Wuhan.

Gen. Mark Milley, the Chairman of the Joint Chiefs of Staff, told reporters on Tuesday that US intelligence was carefully examining the possibility that the virus accidentally got out of a lab in Wuhan.

“There’s a lot of rumour and speculation in a wide variety of media, blog sites, etc.,” Milley said, according to DefenseOne. “It should be no surprise to you that we have taken a keen interest in that, and we have had a lot of intelligence take a hard look at that.”

“At this point it’s inconclusive,” he added, saying that while “the weight of evidence seems to indicate natural, but we do not know for sure.”

As The Post’s David Ignatius and others have noted, the argument that the virus originated in the Wuhan market has some unresolved inconsistencies.

The market did not sell bats (though it’s possible that some of the other animals had connections with bats), and research published in The Lancet in January found that neither the first known person to be infected nor many in the first cluster of patients had any connection to the market.

Ignatius also said that another lab, the Wuhan department of the Chinese Centre for Disease Control and Prevention, was researching animal coronaviruses right next to the market and holds only a level-two biosafety certification.

“I don’t think it’s a conspiracy theory. I think it’s a legitimate question that needs to be investigated and answered,” Xiao Qiang, a research scientist at the University of California at Berkeley, told Rogin of the evidence that the virus may have got into the population from a lab accident. “To understand exactly how this originated is critical knowledge for preventing this from happening in the future.”