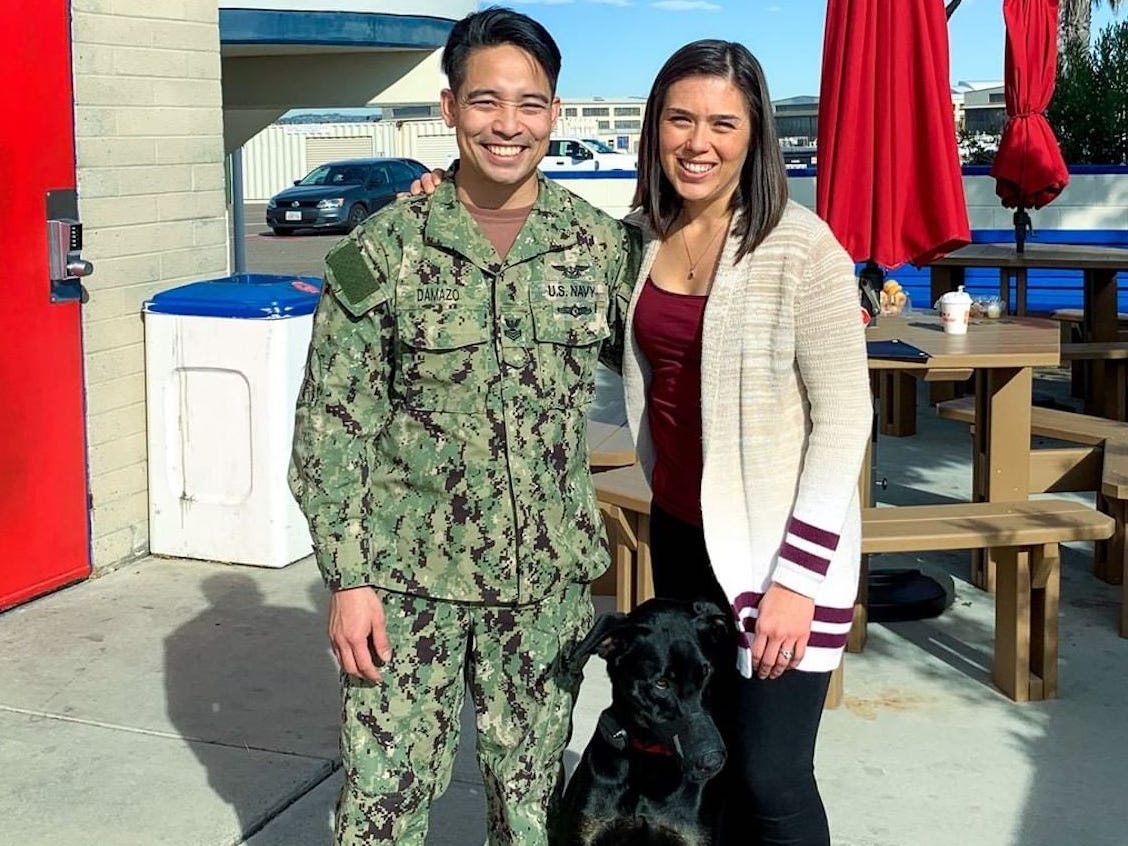 Courtesy of Mike DamazoMike Damazo and his wife, Grace.

Mike Damazo joined the Navy at 18, but he knew he wanted to own real estate even earlier.

Growing up in New Jersey, Damazo remembers watching his uncles flip homes for a profit and his mother’s and stepfather’s desire to buy a house of their own. But when a family member was deported to the Philippines, they moved back there too.

“I just remember that family home being kind of taken away from me,” Damazo, a 35-year-old petty officer stationed in Japan, told Business Insider. “It was so nice the house in Jersey, and that was the motivation for me to be like, ‘OK, I am going to own property, and I’m going to be able to take care of my mum.'”

Years of overspending pushed real estate out of reach

It wasn’t easy, Damazo realised. Stationed in San Diego for the Navy, he found himself “spending lavishly to keep up with the Joneses,” he said. He racked up tens of thousands of dollars in credit card, auto, and personal-loan debt.

“I feel like it was a total of 10 years of my life, just thinking I had enough money, but really it was just living paycheck to paycheck,” Damazo said.

A turning point came when Damazo was on deployment and attended a finance class offered by the military. A high-ranking official he looked up to said they were in a lot worse shape than he was financially. That motivated him to become debt-free.

But shortly after Damazo was pulled over for driving under the influence, a misdemeanour in San Diego. In 2013 he was sent to a new duty station, in Lamoore, California, a rural town outside Fresno. It was a setback, he said, but coincidentally it helped him fast-track his real-estate dreams.

“When I got there, I didn’t lose any rank, but I took a deep pay cut just because the cost of living in Fresno was way cheaper than San Diego,” Damazo said. “I had to really buckle down and get into the nitty-gritty of my finances.”

In Lamoore, Damazo rented a single room for $US500, took on a second job as a sushi chef, and worked hard to pay off more of his debt. Within a year he bought his first property.

“I was looking at the housing market and I noticed houses that were 1,300 square feet and cheaper than in San Diego,” he said. After years of yearning to buy a property in the more expensive coastal market but unable to afford it, the time was finally right in Lemoore. 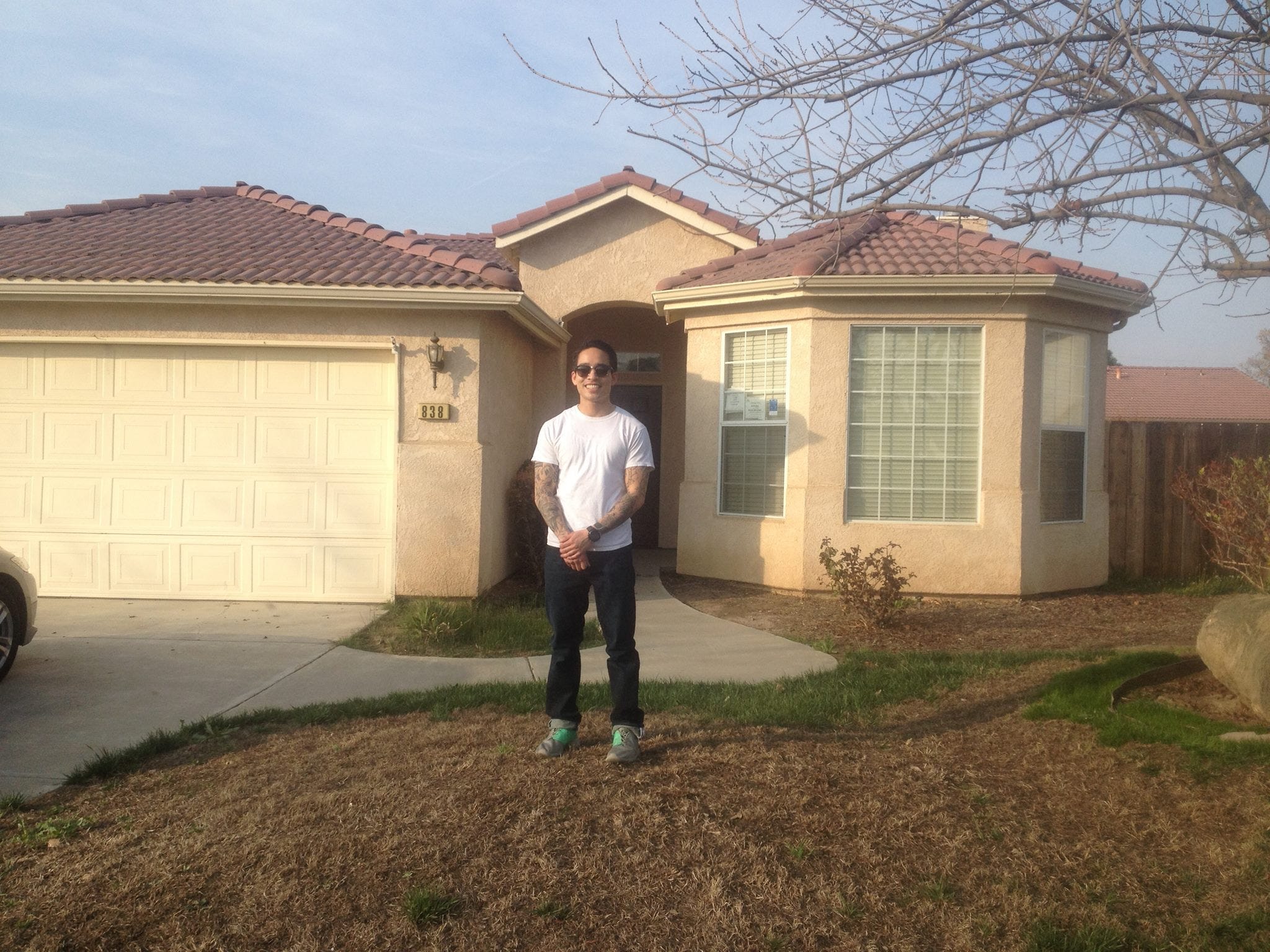 Mike DamazoMike Damazo at his rental property in Lemoore, California.

The house, a foreclosure, cost $US165,000. He took out a USDA loan, available to eligible homebuyers in mostly rural areas, and bought the three-bedroom house with nothing down.

The mortgage was $US1,100 a month, but Damazo had a plan to cover it, and turn a profit. He rented out the two biggest rooms to fellow service members, for a total of $US900 a month, and lived in the smallest room himself.

In the real-estate investment world it’s called house-hacking, whereby the owner of a single-family home or multi-unit building lives in the smallest and usually cheapest room or unit, and collects rent from the others.

Damazo was also collecting from the military. He was getting a basic allowance for housing, known as BAH, of about $US900 a month added to his paycheck. The amount is tied to a person’s rank, marriage and dependency status, and pay, and is based on local rental market prices.

Damazo needed to put only $US400 toward housing costs, $US200 to cover the remaining balance on the mortgage, and $US200 into a cash reserve for home maintenance. The rest was his to keep.

Two years later, Damazo got orders from the Navy to return to San Diego. He transitioned the Lemoore property into a full rental and hired a property manager. He pays them 8% of the total rental income â€” now $US1,450 a month â€” to handle landlording duties and keep an eye out for other real-estate investment deals in the area. Damazo said he pockets about $US200 a month after expenses.

Within six months of moving back to San Diego, he was snatching up more real estate. This time he used a Veterans Affairs loan, which allows eligible active-duty service members to buy with no down payment and no mortgage insurance, and lock in a lower interest rate. Damazo purchased a $US350,000 townhouse with nothing down in La Jolla, a tony beach community.

He and his wife, Grace, lived in the one-bedroom home instead of renting it out, but his housing allowance had been bumped up to $US3,000 a month after returning to San Diego. That left him with yet another surplus after paying his monthly mortgage and homeowners’ association totaling $US2,050.

Damazo put the townhouse up for sale this summer, when he relocated to Japan. He’s hoping to make a profit so he can parlay his earnings into a new investment property, he said, possibly in Texas, where real estate is cheaper.

For now he’s hanging on to the rental property in Lemoore, armed with an exit plan to sell if his costs exceed income generated from tenants.

“The goal is eight properties, passive income, and just being able to keep it up,” said Damazo, who runs a YouTube channel called “Fitness Wealth,” where he talks about his own journey to building wealth, shares personal-finance advice, and interviews experts.

His advice to fellow service members looking to get into real-estate investment is to take advantage of the monthly housing allowance from the military by living below their means.

For those who don’t have military perks available but are interested in real-estate investing, be patient, he said.

“Patience is the biggest thing for someone just starting off,” Damazo said. “It’s easy to kind of watch and read other people’s stories of being so much more of a success in real estate, but just remember that this is your story and you’re in your lane. Just take it slow and look for the right deal. And always have an exit strategy, no matter what.”