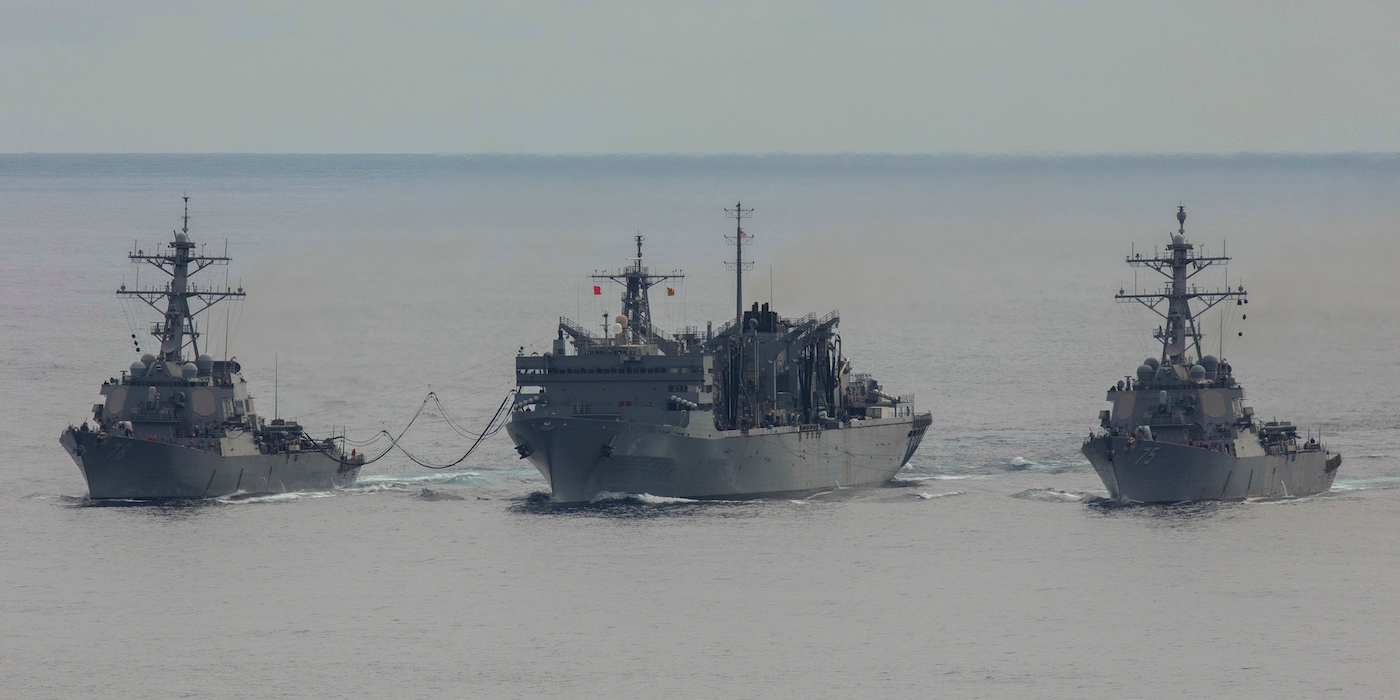 US NavyUS Navy destroyers USS Donald Cook and USS Porter conduct a connected replenishment with the USNS Supply in the North Atlantic, April 28, 2020.

US Navy ships at sea rely on Military Sealift Command vessels for refuelling and resupply, but those roles were reversed this month, when MSC fast combat support ship USNS Supply was on the receiving end of that operation.

During multiple replenishments at sea in the Mediterranean and North seas, Arleigh Burke-class guided-missile destroyers USS Porter, USS Roosevelt, and USS Donald Cook delivered fruits and vegetables, foul-weather gear, mail, and milk to the Supply, according to a Navy release.

The transfers were a first for Military Sealift Command and for the Navy’s 6th Fleet, which is responsible for the waters around Europe. The replenishments were done with guidance from specialists with Task Force 63, which handles logistics for 6th Fleet. 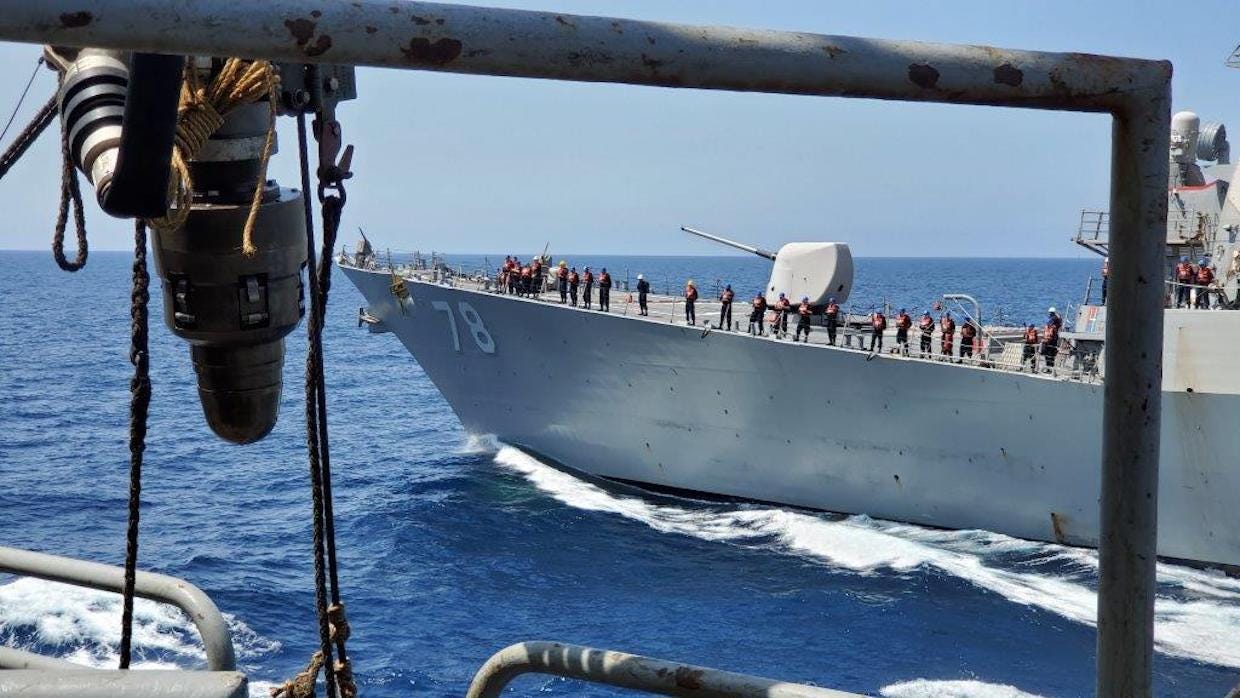 “In my 30 years in the Navy, I have never seen a [guided-missile destroyer] deliver fresh milk to a combat logistics force ship,” Cmdr. Romeo Bautista, logistics director for CTF-63, said in the release.

Challenges and restrictions related to the coronavirus pandemic “are providing ample opportunities for logisticians and warfighters to think outside of the box to ensure uninterrupted logistics support in the 6th Fleet area of operations,” Bautista said.

The pandemic has upended US military operations, particularly in Europe. Italy, home to 6th Fleet headquarters in Naples, has been hit especially hard.

The Navy has struggled with outbreaks aboard its ships in other parts of the world, and 6th Fleet has taken steps to protect its crews. 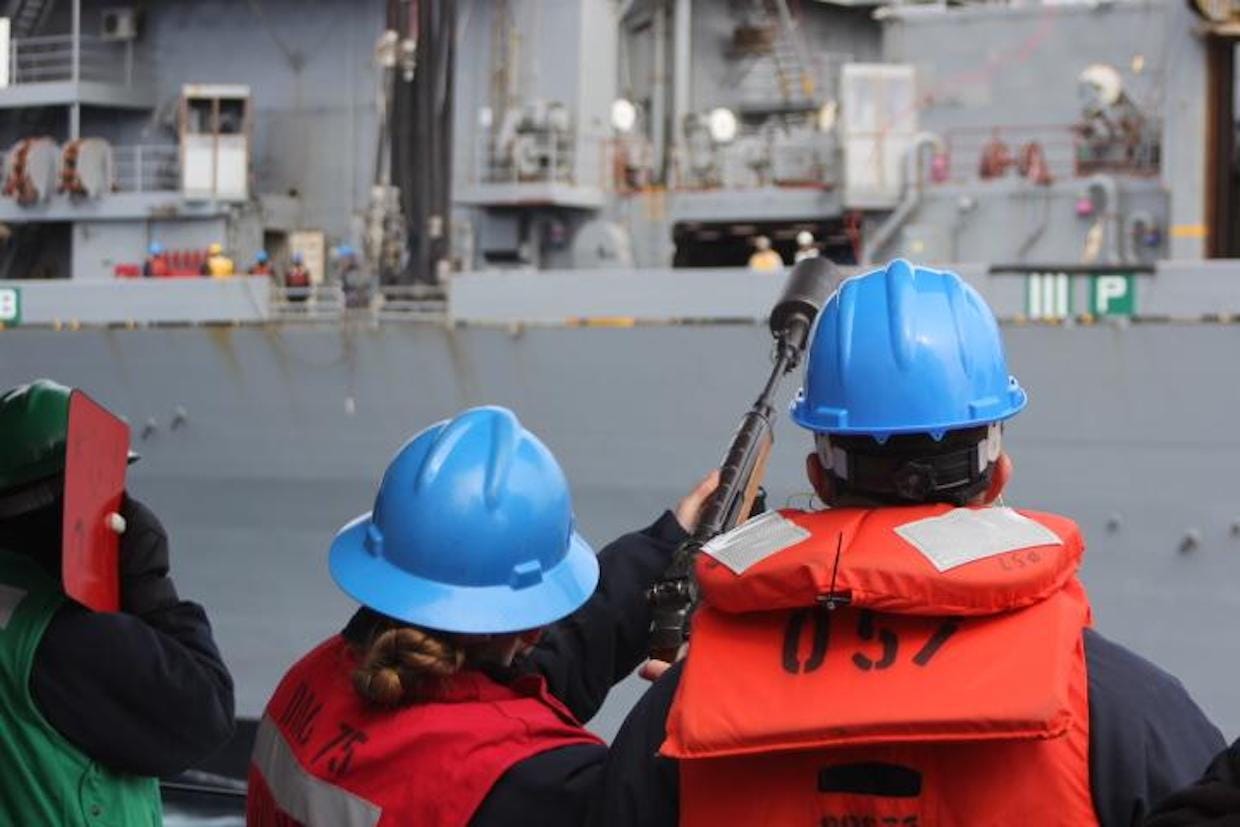 The Supply had seen “multiple, sudden schedule changes,” the release said, “which caused missed and cancelled opportunities to fully replenish while in port.”

“Supply had been doing everything they could and due to the current environment were unable to receive everything they need. I wanted to make sure they were priority. We worked hard for them like we would with any of our ships,” Logistics Specialist 2nd Class Emily Bongolan said in the release.

USNS Supply had enough supplies for its crew but used the opportunity to top off its stocks of fruits, vegetables, and milk, Raines said. “US Navy assets routinely support each other and resupply at sea at every given opportunity, and USNS Supply was looking to top-off since they were receiving other goods during the transfer.” 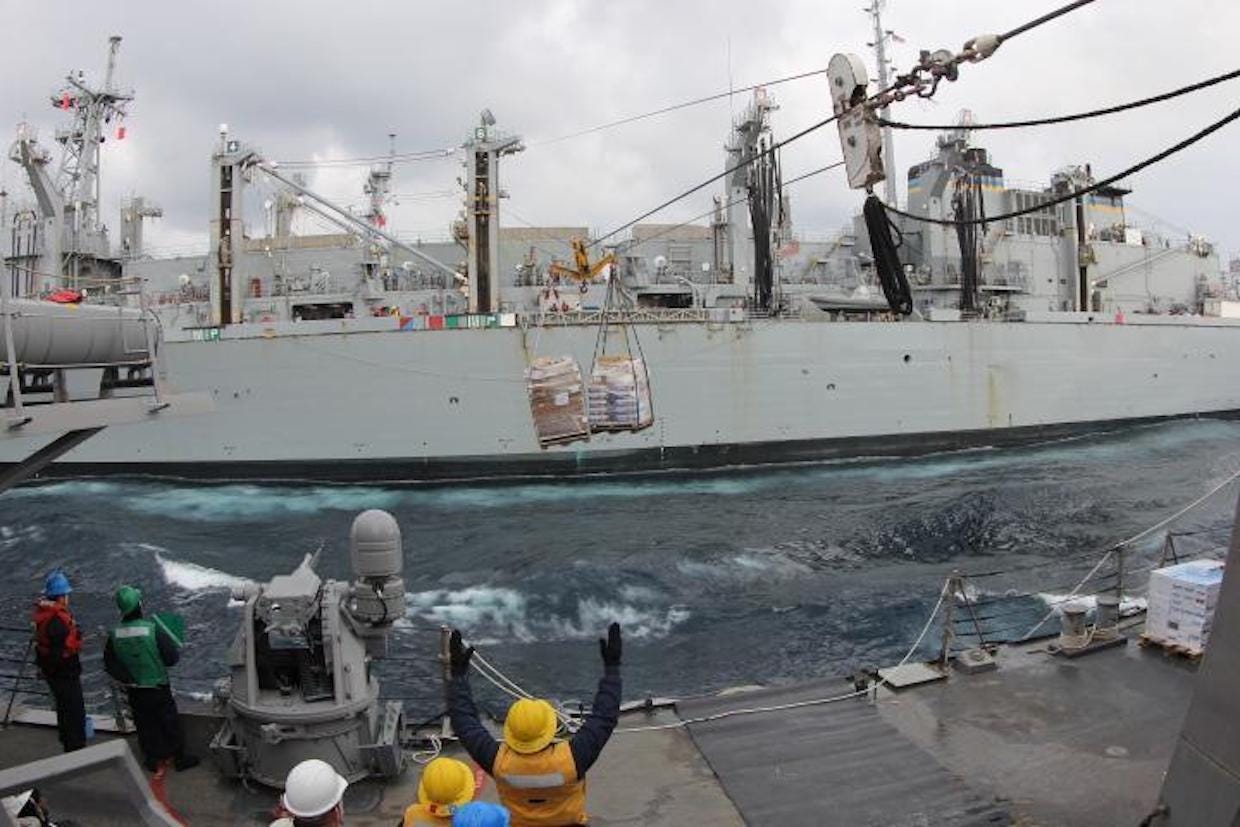 Underway replenishments are one of the most complicated tasks a Navy crew does, requiring them to steer within 180 yards to 200 feet of another ship while pallets are slung across the gap on wires, sometimes for hours. Fuel is often transferred at the same time.

Conducting replenishments at sea “requires a lot of focus. There’s a lot of distractions. There’s a lot of things happening on the bridge at that time, but you have to be super keyed-in to what the ship is doing,” Ensign Sarah Ellis, a conning officer aboard the destroyer USS Jason Dunham, told Insider at New York City Fleet Week in 2019.

While the role reversal was a first, the capability was built-in.

Guided-missile destroyers and other Navy ships “can easily transfer supplies between each other and supply ships,” Raines said. “This ability was by design, which allows for transfer-at-sea on items such as outgoing mail.”

The other end of the wire 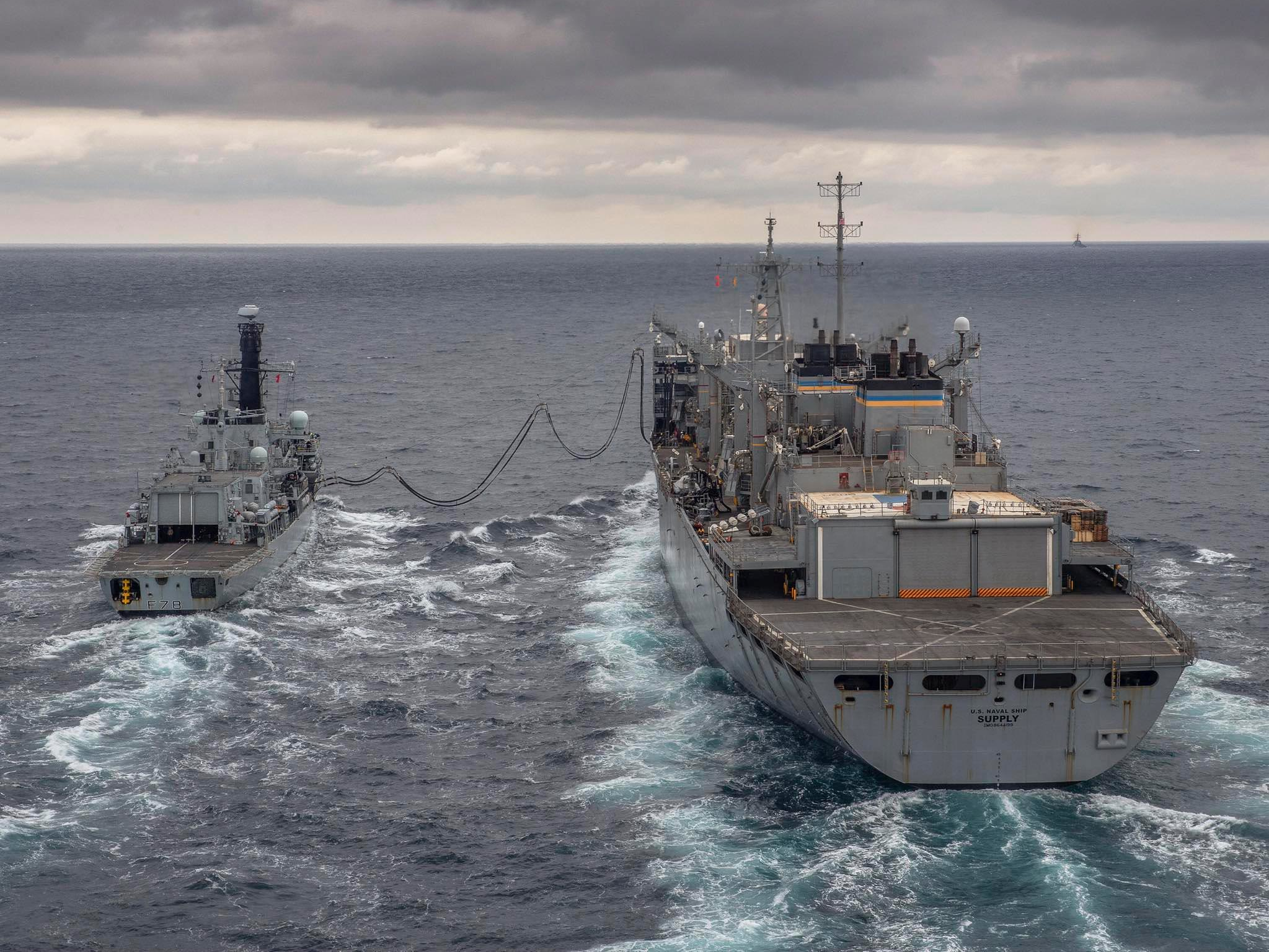 HMS Kent/Dan RosenbaumRoyal Navy frigate HMS Kent during a replenishment-at-sea with USNS Supply during exercises with the US Navy in the Arctic Circle, May 4, 2020.

The Supply’s replenishment came as it accompanied the three US destroyers and a British Royal Navy frigate above the Arctic Circle.

The ships conducted anti-submarine warfare exercises with a Navy submarine and P-8A Poseidon patrol aircraft in the Norwegian Sea on May 1, before sailing into the Barents Sea for additional exercises on May 4. The latter trip was the first by US Navy surface ships since the mid-1980s.

The Arctic can be especially inhospitable – James Stavridis, a retired Navy admiral and former NATO Supreme Allied Commander Europe, recalled seeing a destroyer struggle in heavy seas and “over a third of my crew lay flat on their backs with seasickness” during a trip above the Arctic Circle – likely making resupply of food and proper gear all the more important for the Supply.

“It was definitely an interesting situation being on the other end of the wire,” USNS Supply Second Officer Tegan Church said in the release.

“Not only was the fresh food and foul-weather gear greatly appreciated, but the mail was a definite morale booster for the crew,” Church said. “Even though our job is to support them, it gives me a warm fuzzy knowing that they are here to supply us too.”