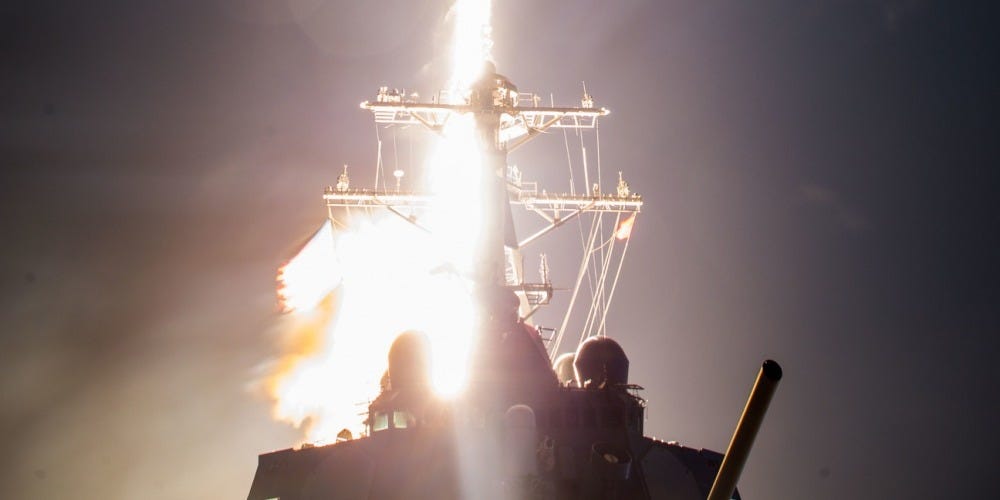 A US Navy destroyer shot down an intercontinental ballistic missile target for the first time on Tuesday in a historic missile defence test, the Missile Defence Agency said.

Early Tuesday, an unarmed target missile simulating an enemy ICBM threat was launched from the Ronald Reagan Ballistic Missile Defence Test Site on the Kwajalein Atoll in the Marshall Islands toward an area of open ocean near Hawaii.

The agency released an animation of the intercept.

There is also an MDA video of the intercept:

“This was an incredible accomplishment and critical milestone for the Aegis BMD SM-3 Block IIA program,” Vice Adm. Jon Hill, the agency’s director, said in a statement.

“We have demonstrated that an Aegis BMD-equipped vessel equipped with the SM-3 Block IIA missile can defeat an ICBM-class target,” he added.

The SM-3 Block IIA is an interceptor developed by Raytheon Missiles & Defence in partnership with Japan’s Mitsubishi Heavy Industries. Tuesday’s intercept test was the sixth time the ship-launched interceptor had been tested against a simulated missile threat. Though the interceptor was originally built to take down intermediate-range ballistic missiles, the US military has now demonstrated a new capability.

“This first-of-its-kind test shows that our nation has a viable option for a new layer of defence against long-range threats,” Bryan Rosselli, the vice president of strategic missile defence at Raytheon Missiles & Defence, said in a separate statement.

As Tuesday’s ICBM intercept test was a preliminary test of a new combat capability, the ICBM target did not deploy countermeasures.

Though the test was not a complex, fully operational evaluation, it stressed the interceptor, pushing it beyond what it was initially designed to do. The Missile Defence Agency said the SM-3 Block IIA would be evaluated further.

A sea-based counter-ICBM capability would augment the existing ground-based missile defence systems in place to protect the US from long-range missile threats, such as those posed by China, Russia, and, more recently, North Korea.

Though the MDA did not mention North Korea or any other country in its statement, an agency representative told The Japan Times that the target missiles were “designed to simulate a threat missile from a rogue nation.”

US missile defence systems would theoretically be able to stop a North Korean missile, but it is unclear how they would fare against more-advanced ICBM threats, such as those posed by China and Russia.

Update: This post has been updated to include a video of the first-of-its-kind intercept.