US GDP report showed 'how big of a hole we have to dig ourselves out of': Here's what 5 economists are talking about following the record output slump 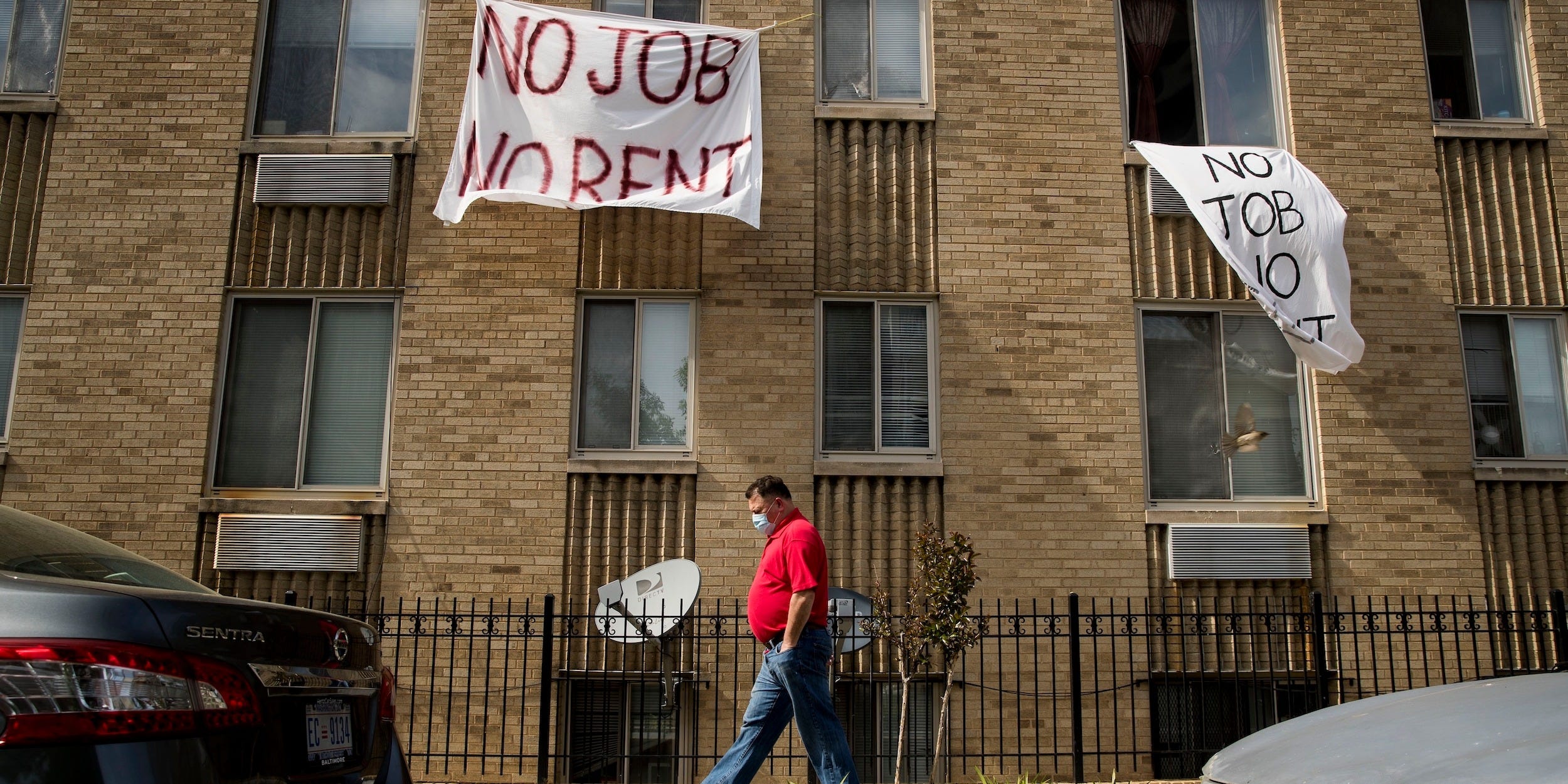 Andrew Harnik/AP PhotoSigns that read ‘No Job No Rent’ hang from the windows of an apartment building during the coronavirus pandemic in Northwest Washington.

Even though US gross domestic product posted a record slump in the second quarter, it wasn’t quite as bad as economists were expecting from the worst months of the coronavirus pandemic lockdowns.

US GDP slumped by a record 32.9% annualized rate in the second quarter, according to figures released Thursday by the Commerce Department. Economists had expected a nearly 35% annualized rate drop. The annualized rate translates into a 9.5% drop from the previous quarter.

The reading, the worst since records began in the 1940s, reflects April, May, and June. In April, most of the country was under strict shelter-in-place orders to contain the spread of COVID-19, which brought much economic activity near a halt.

While states began to reopen their economies in May and June, the rebound in output wasn’t enough to offset the damage inflicted by the pandemic lockdowns.

The GDP report showed that personal consumption expenditures fell by 34.6%, with the sharpest drop in spending on services, which slumped 43.5% in the quarter. Gross private domestic investment slumped 49% in the quarter, as fixed investment declined 29.9% and nonresidential investments on structures, equipment, and intellectual property products dipped 27%.

At the same time, state and local spending slumped by 5.6% in the quarter. Government consumption expenditures and gross investment rose 2.7%, driven by a 39.7% jump in nondefense spending due to the historic stimulus package passed in March. The GDP report doesn’t capture stimulus checks or unemployment benefits paid out, but instead reflects increased spending on goods and services.


Read more:
‘Castles built on sand’: Famed economist David Rosenberg says investors are being too reckless as stocks rally – and that a vicious long-term bear market is far from over

Going forward, economists expect that third quarter GDP will show a rebound as US states have reopened and people have slowly been going back to work, shopping, and other economic activities.

Still, surging new COVID-19 cases that have forced some states to pause or roll back reopening plans may mean a more muted jump in third-quarter GDP, and that it could take longer than expected to reach pre-COVID-19 levels of output.

Here’s what five economists had to say about the US economic recovery following the historic GDP report.

1. Jefferies: “Now we know how big of a hole we have to dig ourselves out of”

“The only value in Q2 GDP data – which are obviously very backward looking – is that now we know how big of a hole we have to dig ourselves out of,” wrote Jefferies economist Aneta Markowska in a Thursday now. “That hole is a bit smaller than we and consensus estimated, but it will nonetheless take a long time to get back to pre-COVID levels of activity, and even longer to get to the pre-COVID trend.”

“Even if growth averages 5% going forward, it will take 2 years to get back to pre-COVID levels. That’s roughly consistent with our base case,” she said. “And, because of the continued growth in the underlying capacity of the US economy – due to population and productivity growth – it will take even longer to get back to pre-COVID trend and full employment. Our best guess is 4 years.”

2. ING: “we feel the recovery could be much bumpier than markets seemingly do”

“So we now know how deep the deepest ever contraction in US economic activity was, but this is old news given financial markets are priced for a very vigorous recovery,” said ING chief economist James Knightley in a Thursday note. “However, COVID-19 is far from beaten and while there is optimism about a vaccine, the timing and its efficacy are still unknown.”

“With virus fears on the rise, jobs being lost and incomes squeezed, we feel the recovery could be much bumpier than markets seemingly do, and think we are in for some data disappointment over the next couple of months – starting with next week’s payrolls number.”

3. RSM: “Probability of a greater than 20% rebound in the current quarter has declined significantly”

“The reopening of the economy that began around May 1 resulted in a far more muted decline that was tracking near 50% in April,” said Joseph Brusuelas of RSM in a note Thursday. “And that is about the only good thing that could be said about an absolutely devastating growth report released by the Commerce Department on Thursday.”

“Still, that premature reopening simply pulled forward activity and resulted in the release of one-time pent-up demand that exhausted itself on or around June 24. The probability of a greater than 20% rebound in the current quarter has declined significantly over the past month, and we think it will not materialise.”

“The far greater question that must be answered is if there will be a policy error from the fiscal authority that results in the creation of conditions that results in further job losses and another downturn later this year or in early 2021,” he said.

4. Alliance Bernstein: “The weakness was, of course, not unexpected”

“We have never seen a quarter like the last one, and hopefully we never will again,” wrote Eric Winograd, senior economist at Alliance Bernstein. “The weakness was, of course, not unexpected. In fact, the average forecast was within a couple of percentage points, which I find remarkable given the very large numbers involved and the inherent imprecision in measuring GDP in an environment like this one.”

“We should not take today’s print as gospel truth-the initial print of GDP is unreliable in good times, and even more so at extremes. Data collection issues add to the normal uncertainty as well. Still, no matter what sort of revisions we get in the next few months, it is clear that Q2 was the worst on record.”

“I remain very confident in the basic trajectory, which has the economy bouncing back quickly from this disastrous quarter but not recovering completely for a very long time. Q3 will look quite strong because it is being compared to Q2 but after that the trajectory will flatten out.”

5. Pantheon Macroeconomics: “A double-digit jump in Q3 GDP is more or less guaranteed”

“The GDP numbers are mind-boggling, breaking all previous records, but they mostly are very close to expectations,” wrote Ian Shepherdson of Pantheon Macroeconomics in a Thursday note.

“Near-real-time data all show that the economy hit bottom in mid-April and then expanded rapidly through mid-June, before flattening,” he said. “That means activity at the end of the quarter was much higher than the average across the quarter as a whole, so GDP growth in Q3 will benefit from a hugely favourable base effect.”

“For example, we reckon that if consumers’ spending is unchanged between June and September, the quarter as a whole will record a 26% annualized increase. In other words, a double-digit jump in Q3 GDP is more or less guaranteed, but that does not mean the labour data will continue to record increasing payrolls and falling unemployment after July.”


Read more:
A fund manager who’s quadrupled investors’ money since 2011 says he uses a famed 5-part psychological theory to shape his portfolio. Here are the stocks he bought for each stage.