On a sunny, cloudless October morning in 2019, twenty-five American Christians gathered at the base of Jabal al-Lawz, an umber-coloured mountain in northwest Saudi Arabia.

Their leader, the evangelical author and preacher Joel Richardson, took out a Bible he’d brought from back home in Kansas, and started to read out loud.

Soon after, he and his congregation began singing hymns, while their hired Saudi tour guides pulled out their smartphones, and started to film.

Richardson was leading the first-ever Christian tour to Saudi Arabia, the home of Islam where the public practice of any other religion is famously forbidden.

Still, the preacher was taken aback when his phone rang that evening. It was the State Department with a message: “Be careful.”

Richardson is to this day bemused. “I guess some of the videos went viral on Saudi social media or something,” he told Insider in a recent interview.

The scene at Jabal al-Lawz, which some Christians believe to be the true location of Mount Sinai, illustrates the rapid social change underway in Saudi Arabia, as well as the dangers that still face the 1.4 million Christians living there.

In the past decade, those caught in the act of worship have been punished, arrested, jailed, or deported, and the sight of Christians brandishing Bibles and singing hymns in broad daylight would have riled many devout Muslims.

In 2014, the kingdom’s religious police deported 12 Ethiopian Christians caught worshipping in Dammam in February, and raided a home in September after hearing it was used for church services, the State Department said. In 2011, 35 Christians were arrested at a private gathering in Jeddah, Human Rights Watch reported, adding that 29 women among them were “subjected to arbitrary body cavity searches.” 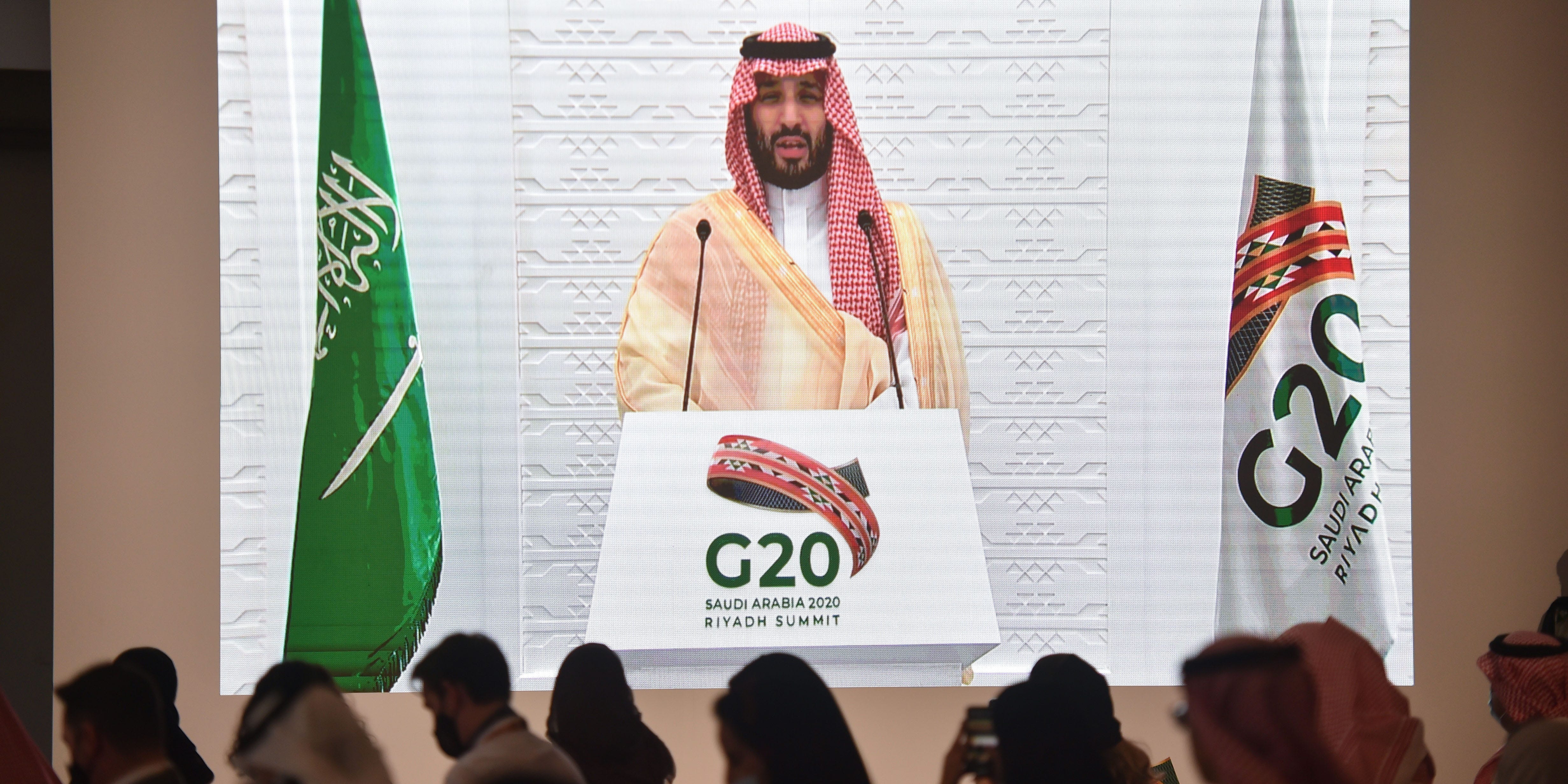 FAYEZ NURELDINE/AFP via Getty ImagesCrown Prince Mohammed at the virtual G20 summit in Riyadh on November 22, 2020.

“There are no churches here,” one Christian who has lived in Saudi Arabia all her adult life told Insider. “We choose to lay low in respect to their culture and religion.” The person requested anonymity over fears for her safety, but her identity is known to Insider.

As more non-Muslim expats arrive for work, the kingdom has increasingly turned a blind eye to their faith â€” neutering the religious police in 2016 â€” while maintaining that Bible preaching or proselytizing Muslims is unacceptable.

But MBS has also enforced a near-total silencing of opposition to his rule, comprising arbitrary detentions, bot armies, alleged assassinations, alleged murder, and widespread efforts to spy on or hack opponents at home and abroad.

The State Department’s warning to Richardson was clear: As a Christian in Saudi Arabia, tread carefully.

The US government has for years asked Saudi Arabia to end the ban on churches, with little success.

“I have gone there and talked to top leaders about opening up a church for these people and they have always said, ‘Saudi Arabia is different and it is the land of the two holiest shrines of Islam,'” Nina Shea, a former US Commissioner on International Religious Freedom, told Insider. “The whole country is a shrine, in a sense, and therefore they cannot have a church built.”

David Rundell, a former chief of mission at the US Embassy in Riyadh, added: “It’s something that we have spoken to the Saudis about on numerous occasions.”

Since MBS’s ascension, a group of US evangelical heavyweights have taken the baton. In October 2018, Joel Rosenberg, one of America’s prominent evangelical authors, accepted an invitation from the prince to meet him in Riyadh.

With Rosenberg came the Rev. Johnnie Moore, a religious advisor to President Donald Trump, and a string of other televangelists. (Trump’s 2016 victory was largely thanks to evangelical support, and top officials like Secretary of State Mike Pompeo, who is an evangelical, have close ties to Rosenberg.)

It was the first time a group of American evangelicals had entered a Saudi royal court in 300 years and, in a two-hour meeting conducted off the record, MBS “discussed virtually every controversial issue,” Rosenberg later wrote for Fox News, without specifying.

Rosenberg said he also asked MBS when he would let a church be built.

“Not now,” MBS replied, as Rosenberg later told Israel’s i24News. “This would be a gift to al-Qaeda,” the prince added, referencing the fact that the terrorist group has often targeted Christians and churches. 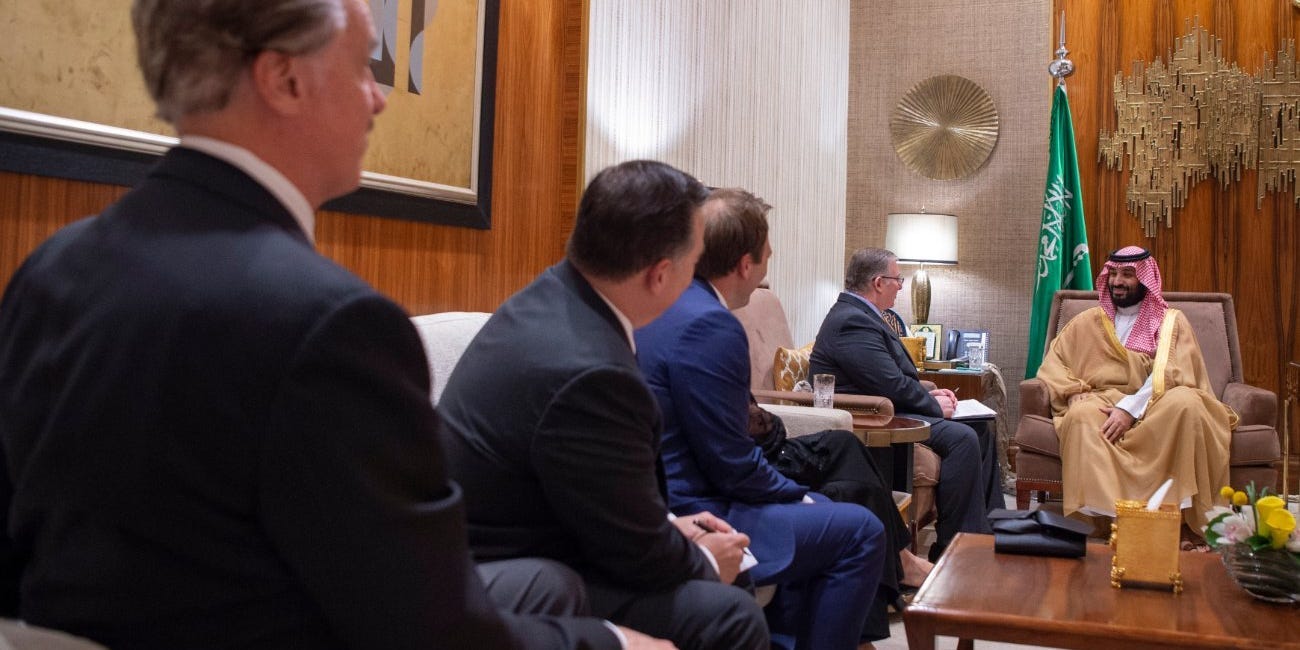 As Saudi Arabia’s leaders, Crown Prince Mohammed and his father King Salman are tasked with defending Islam, and the feasibility of a church on their land concerns a disputed saying of the Prophet Muhammad: That no two religions should exist on the Arabian peninsula.

Some clerics have argued that the rule only applies to the holy cities of Mecca and Medina. According to Rosenberg, MBS also told the 2018 meeting he had “asked my scholars” to define the Arabian peninsula.

Not deterred, Rosenberg and his group returned to Saudi Arabia in 2019, and left once again with evidence that change was afoot. The delegation was briefed about the historic existence of churches on the peninsula, Moore told Insider recently, adding: “It is a very significant thing â€” open conversations about archaeological evidence of churches that existed at the time of the Prophet.”

There, MBS also acknowledged that the Prophet had “lived peacefully among Jews and Christian monks,” wrote attendee Skip Heitzig, the senior pastor of Calvary of Albuquerque, in a subsequent blog post.

The delegation was set to visit MBS once again in 2020, but the pandemic put an end to those plans, a representative for Rosenberg told Insider, adding that a 2021 trip may be derailed for the same reason.

Despite the hurdles, the group have kept steady pressure on Saudi officials. On September 28, 2020, Rosenberg and seven other evangelicals from the 2018 and 2019 trips travelled to McLean, Virginia, to dine at the home of Princess Reema bint Bandar al-Saud, the Saudi ambassador to the US, the representative said.

The Royal Embassy of Saudi Arabia in Washington, DC, did not respond to Insider’s request for comment for this article.

Though efforts to secure a church in Saudi Arabia have seemed fruitless to date, experts say it is a matter of when, not if.

Neom is a $US500 million, carbon-neutral, 10,230-square-mile megacity due to be completed in 2025, and MBS’s pet project. Promotional brochures shared with Insider show Neom would have a diverse population “from a mix of homelands, religions and backgrounds,” and a “progressive law compatible with international norms.” 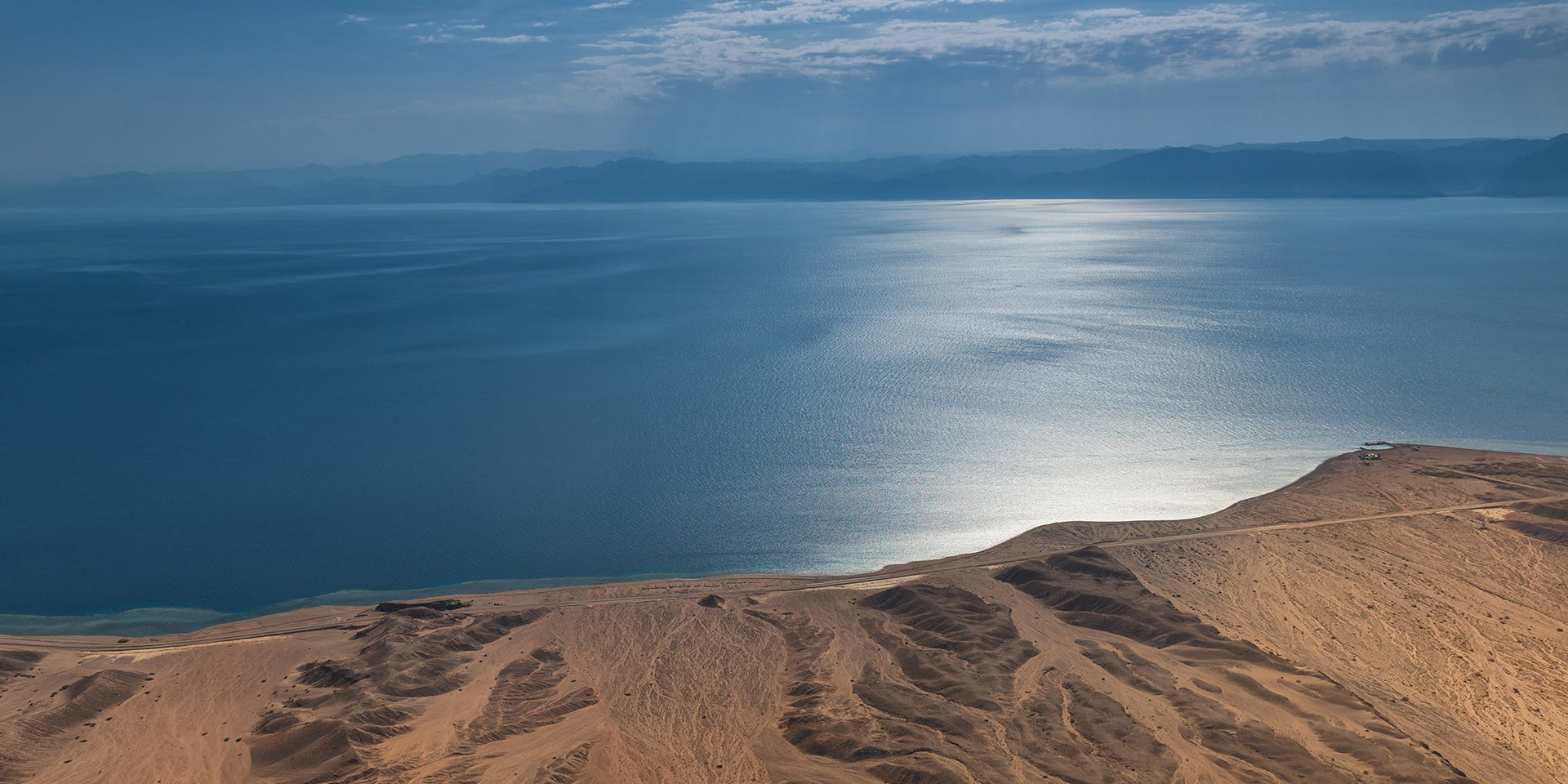 Ali Shihabi, a member of Neom’s advisory board, told Insider: “The issue has been mentioned for Neom,” adding that a church was “certainly on the to-do list of the leadership.”

Rundell, the former diplomat in Riyadh, told Insider that Neom is a feasible location for the first church due to the unique nature of the legal system. “Neom is creeping toward being a non-Saudi entity in many regards,” he said.

However, others think placing a church in Neom will be meaningless.

“It’s going to be a PR stunt,” Ali al-Ahmed, a Saudi analyst, told Insider. “You need to have one where most of the Christians living in the big cities are: Jeddah, Riyadh.”

Shea, the former US commissioner on religious freedom, said that while most Christians living in those cities would find little use for a church hundreds of miles away, “it would be helpful to have a symbol of tolerance … that isn’t a mosque in Neom.”

While Neom is believed to be the leading contender for the first Saudi church, Shihabi said the diplomatic quarter in Riyadh is another likely setting. “That allows an element of ‘diplomatic cover’ for public consumption,” he said.

For religious leaders like the Catholic bishop Paul Hinter, whom Pope Francis appointed last May as Apostolic Administrator for the Northern Vicariate of Arabia, it is important that the flock in Saudi Arabia have a church that they can actually access.

“My wish is that such churches or worship places be located where the expat workers and employees are living,” he told Insider, “and not only in the future showcase city or cities.”

Rosenberg has not publicly commented on the feasibility of a church in Neom. However, during the 2019 visit, he was taken to see the site, telling Arab News he was “eager to come back and bring others when the time is right.” 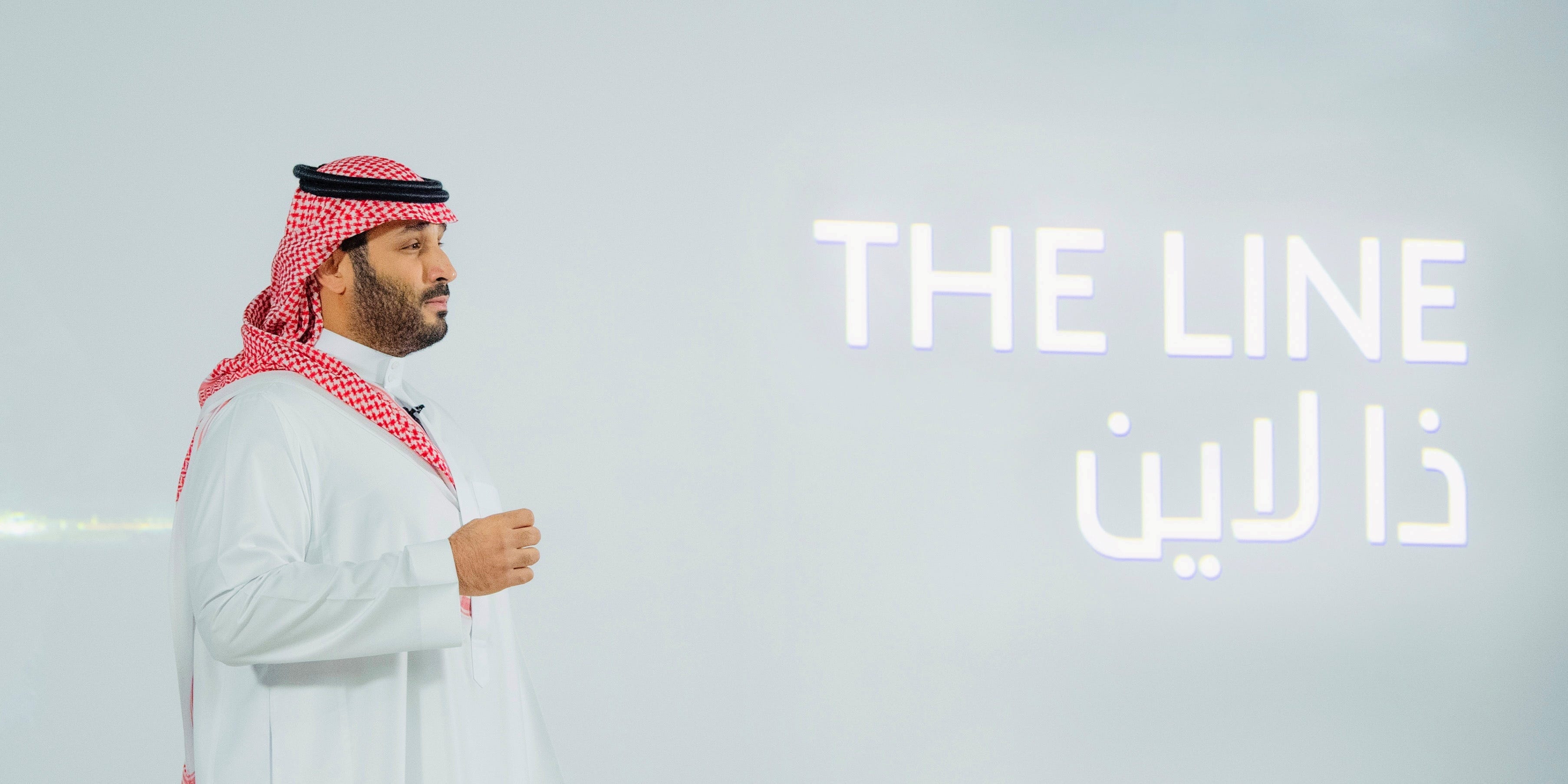 Saudi Royal CourtCrown Prince Mohammed announcing ‘The Line,’ a city to be built at Neom, on January 10, 2021.

Rumours that Christian leaders of various denominations have negotiated with the Saudis for a church have swirled for decades, long before MBS’s rise. Each Christian denomination has its own house of worship, and the ultimate goal is for each to have their own church in Saudi Arabia.

In 2008, Catholic Archbishop Paul-Mounged el-Hashem told The Guardian that “discussions are under way” about building a church. And in 1973, Pope Paul VI sanctioned the building of the first Saudi-funded mosque in Rome, believing a reciprocal gesture would come from the kingdom. It did not.

In Washington, the necessity for securing a church in Saudi Arabia has gone in and out of fashion as different administrations passed through the White House. “It was quite an important issue during the Bush administration because they had a strong domestic constituency amongst religious conservatives,” Rundell said, adding the issue was also important to the Trump administration.

President Joe Biden’s plans are less clear. Unlike his predecessor, he has promised to hold Saudi Arabia accountable for its actions, vowing during his election campaign to make the kingdom “the pariah that they are.” The State Department declined to comment. 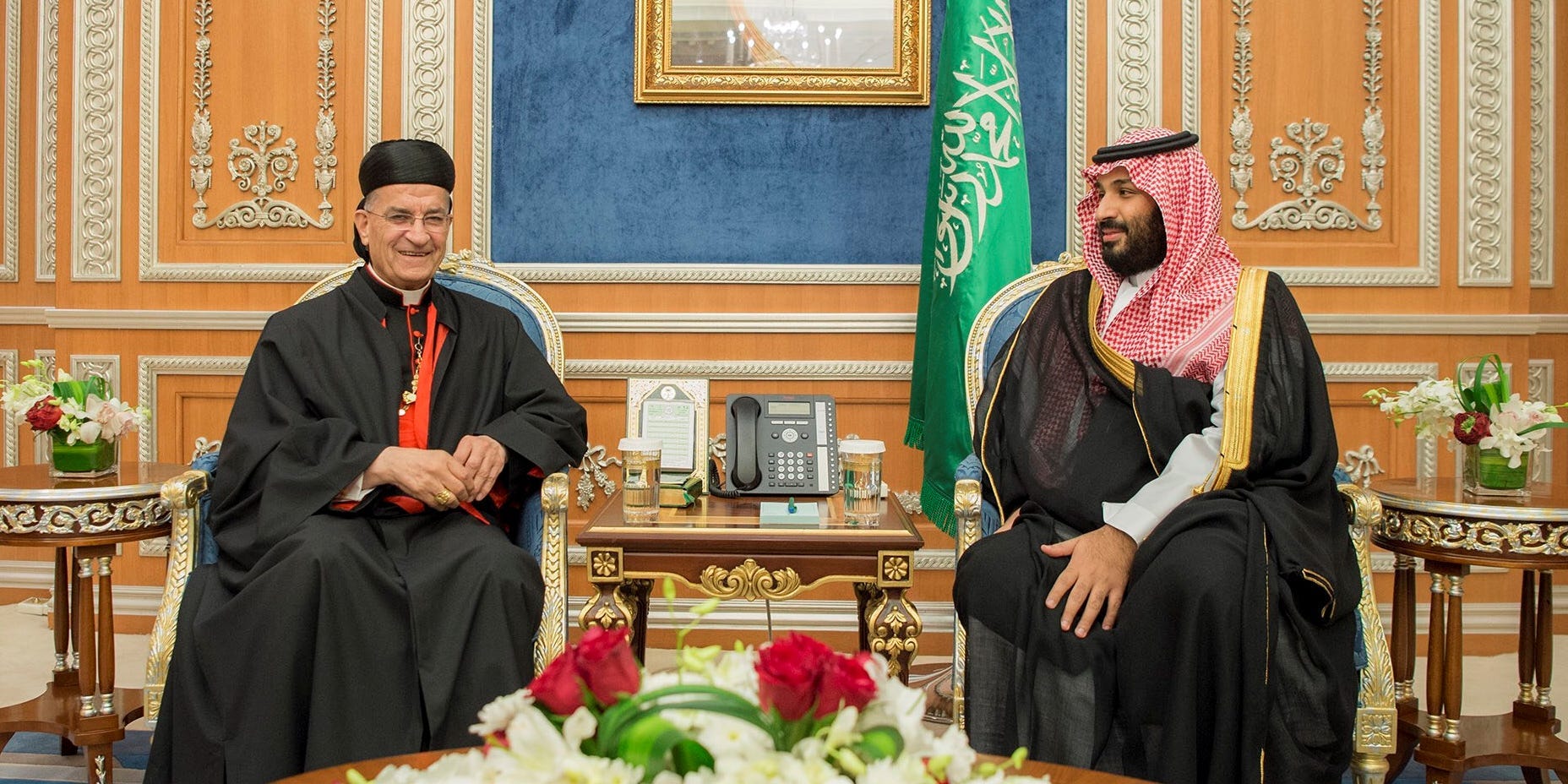 But before MBS, religious authorities in the Middle East had little success in engaging their Saudi counterparts on the issue.

Bishop Paul Hinder, who as a Catholic envoy in the region visited Saudi Arabia every year from 2004 to 2011, told Insider it was “almost impossible to get in touch with civil or/and religious authorities” at the time.

The kingdom is now showing willing, Hinder said, though adding that the reality for Christians remains “far from being ‘normal.'”

Moore added: “I personally believe religious freedom is possible in Saudi Arabia and I didn’t believe that before.”

MBS will make the call, but some will object

If MBS ends the ban on churches, it will not go unopposed.

“Is there going to be a pushback? I definitely think there will be,” Prince Abdullah, the academic, told Insider. “[But] are they going to be violent? I doubt that because of the efficiency and strength of the security apparatus in the kingdom.”

One opponent is Sheikh Assim al-Hakeem, a leading Saudi cleric. “Do you see any mosques in the Vatican? No. Likewise, we are not allowed to have any churches,” he told his YouTube channel.

“These lands are holy lands.”

A labour of love

Christian tours to Saudi Arabia, like Richardson’s in October 2019, are growing in popularity as the kingdom becomes more tolerant. Living Passages, a leading Christian tour company, is already offering four trips in 2021, while others are seizing the moment.

“This could be one of the top [Christian] tourist sites in the world, especially in the northwest where they’re trying to develop the Neom project,” said Ryan Mauro, who leads Christian tours to Saudi Arabia.

A church is coming for Saudi Arabia, experts are sure, but the timeline is unclear. Even Rosenberg, who spent hours pressing MBS on religious freedom, is hopeful but not holding his breath.

For the Christian community, the quest for a church is a labour of love.

“I should be happy on the day when the hundreds of thousands of Catholics living in Saudi Arabia will have their churches and the possibility to gather and pray in freedom,” Bishop Hinder said.