The US Chamber of Commerce criticized President Joe Biden’s $US2 ($3) trillion infrastructure plan on Wednesday, calling the proposed way it would be funded “dangerously misguided.”

“Properly done, a major investment in infrastructure today is an investment in the future, and like a new home, should be paid for over time – say 30 years – by the users who benefit from the investment,” the group said. “We strongly oppose the general tax increases proposed by the administration which will slow the economic recovery and make the U.S. less competitive globally – the exact opposite of the goals of the infrastructure plan.”

Biden’s proposal, called the American Jobs Plan, is set to be unveiled at an event in Pittsburgh on Wednesday before then moving into negotiations in Congress.

The bill includes investments in greener energy, broadband, highways, and housing and is proposed to be spent over eight years.

It would be offset by a substantial tax increase of up to $US3 ($4) trillion, which would target corporations.

In opposing the tax hike, the Chamber of Commerce – which lobbies for businesses – called for “productive solutions” from Republicans and Democrats in Congress.

“The hard work of achieving bipartisan consensus is the best and only realistic path to enactment of historic infrastructure legislation,” it said. “While today’s action, coupled with continued efforts to find consensus from bipartisan groups in both the House and Senate is encouraging and a start in a long process, we urge both Democrats and Republicans to avoid further partisan gridlock and provide productive solutions to get an infrastructure bill passed this year.” 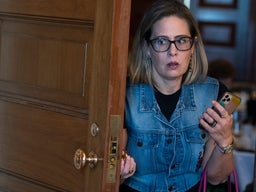