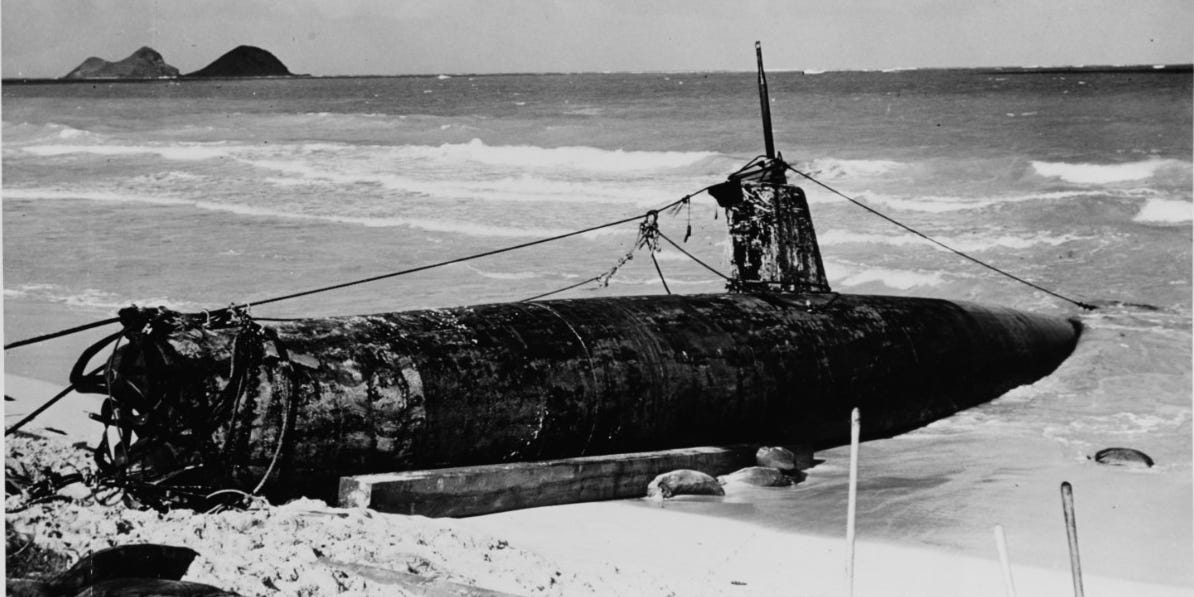 US Naval History and Heritage CommandA Japanese Type A mini submarine on an eastern Oahu beach during salvage by US forces after it was discovered on December 8, 1941.

Just before dawn on December 8, 1941, Lt. Paul Plybonwas and Cpl. David Akui of the Hawaii National Guard were patrolling Waimanalo Beach 15 miles east of Pearl Harbour when they discovered an exhausted, half-naked man desperately swimming near the shore.

On high alert after Japan’s surprise attack on Pearl Harbour the previous day, the soldiers moved to detain him. After dragging the man out of the water, they discovered he was Japanese.

Ensign Kazuo Sakamaki, a Japanese sailor, had just hours earlier been piloting a mini submarine on a mission to infiltrate Pearl Harbour and sink US ships as part of the attack.

He was taken to Fort Shafter, interrogated, and sent to a prisoner of war camp, becoming the US’s first prisoner of World War II.

A secret weapon and a secret mission 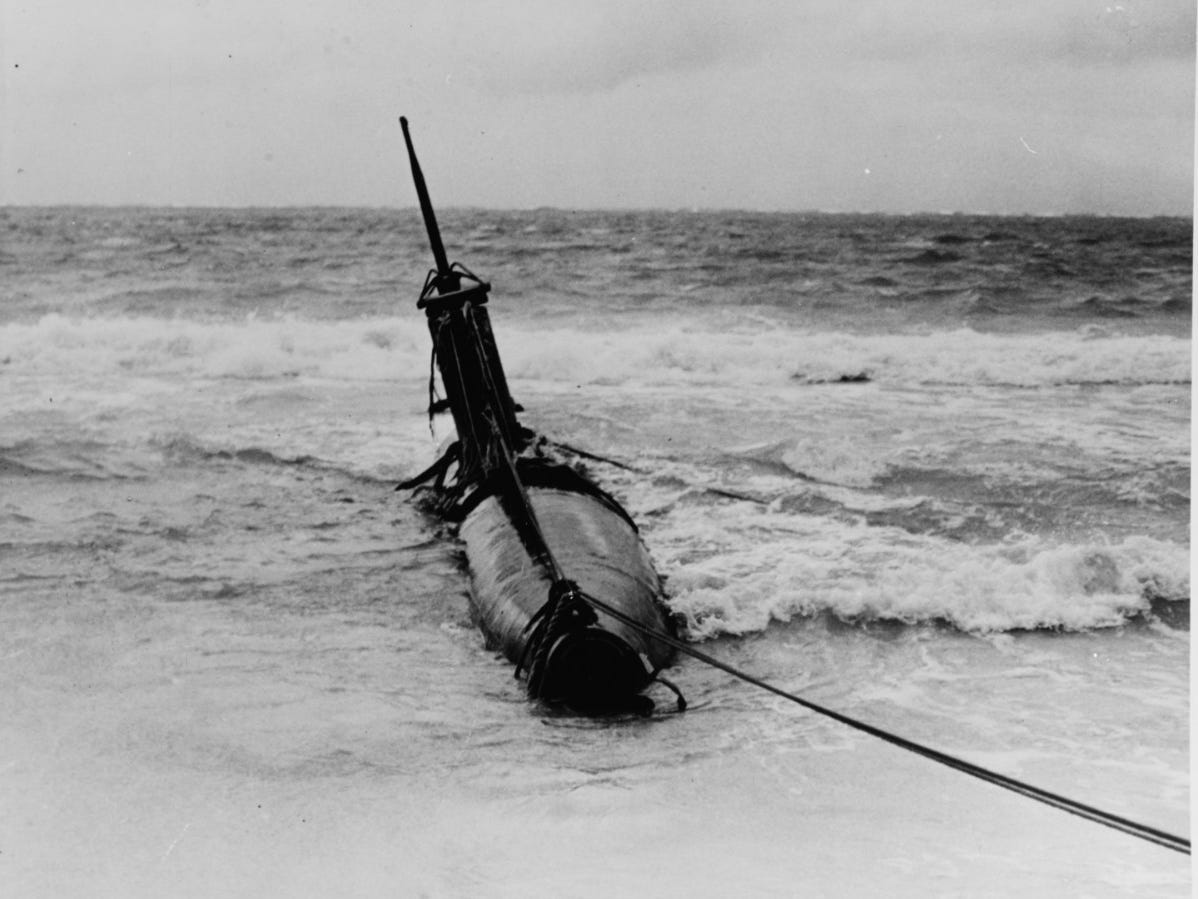 US Naval History and Heritage CommandA Japanese Type A mini submarine after it ran aground in eastern Oahu during the Pearl Harbour attack. The photograph was taken on or shortly after December 8, 1941.

Sakamaki was a member of Japan’s Special Naval Attack Unit. The secretive unit was tasked with a daunting mission: Sail five Type A KÅ-hyÅteki-class mini submarines into the heart of Pearl Harbour, wait for the air attack to begin, and then launch their torpedoes at American ships.

The cigar-shaped submarines were 78 feet long and 5 feet wide. They had a crew of two, were powered entirely by batteries, could sail at 19 knots, and carried two 1,000-pound torpedoes.

The original plan was for the attack to be conducted exclusively by aeroplanes from Japan’s carriers, but Japanese commanders wanted to test their new weapon. They also wanted to use submarines to sink any American ships that attempted to flee the harbour.

The mission was likely a one-way trip. Although a rendezvous was planned off the coast of Lanai Island on December 8, limited battery life meant it was unlikely the subs could make it, and there was the chance their exit from the harbour would be blocked by sunken ships.

Not wanting their “secret weapon” to fall into enemy hands, the Japanese equipped the subs with self-destruct mechanisms, and the crewmen were given swords and pistols to commit suicide if they faced capture.

“We were members of a suicide squadron,” Sakamaki later wrote. “We did not know how we could ever come back.” 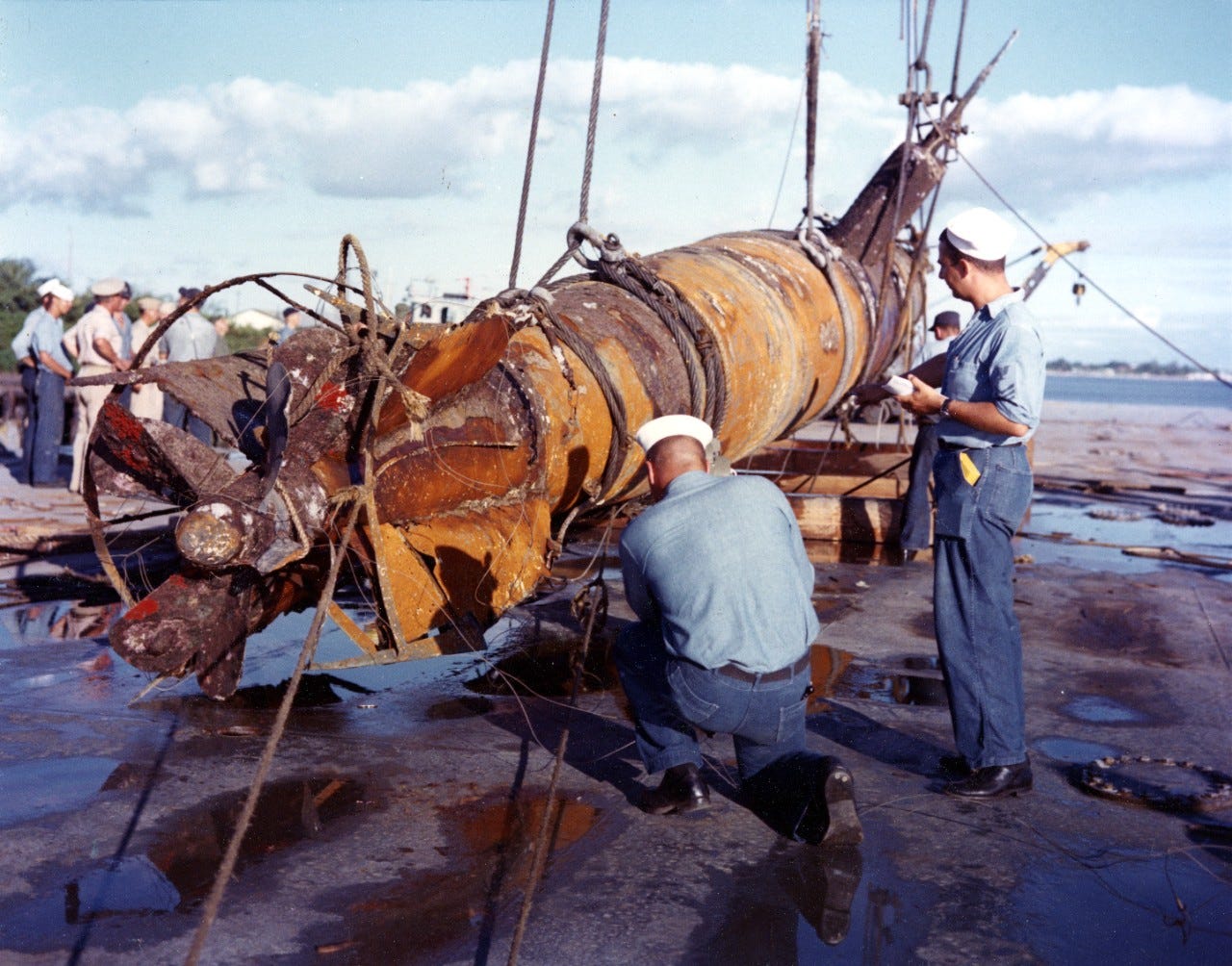 US Naval History and Heritage CommandOne of the Japanese mini submarines that took part in the Pearl Harbour attack after its recovery near the entrance to Pearl Harbour in late July 1960.

All of them were headed to a grim fate.

At 3:50 a.m., one of the subs was spotted by the minesweeper USS Condor, which then alerted the destroyer USS Ward. Ward fired on the sub a few hours later, hitting its conning tower and sending it to the bottom in the first combat action of the US’s yet-to-be-declared war.

At least one Type A managed to make it into the harbour. It attempted to torpedo the seaplane tender USS Curtiss during the air attack, but its torpedo missed. It was soon fired on by multiple ships and then rammed and sunk by the destroyer USS Monaghan after another unsuccessful torpedo launch.

Two Type As disappeared, and their actions during the attack remain unclear. The Japanese received a message that one of their subs had hit a US ship, and US ships at Pearl Harbour reported torpedoes being fired at them, but whether any of the submarines successfully attacked the US fleet remains uncertain.

Doomed from the start 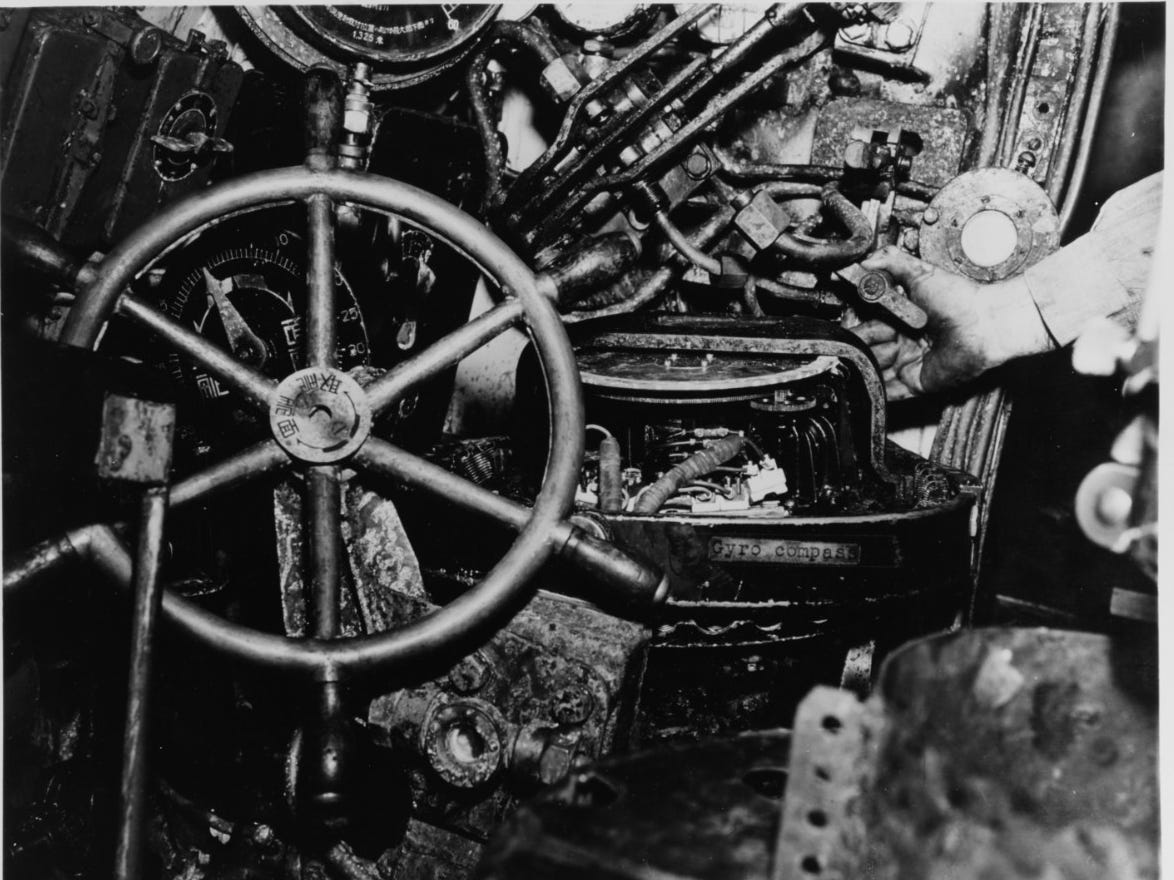 US Naval History and Heritage CommandA photo of the the submarine’s control room, showing a control wheel and the gyro compass, which was non-functional during its last mission, after salvage by US forces, December 1941.

Sakamaki and his crew mate, Chief Warrant Officer Kiyoshi Inagaki, ran into trouble before they even launched. Their sub, HA-19, had a faulty gyrocompass, and attempts to fix it were unsuccessful.

Determined to get into the harbour, they tried to sail HA-19 in the right direction but went hopelessly off course and struck submerged coral reefs three times. They were eventually discovered and attacked with depth charges, which knocked them unconscious.

When they regained consciousness, the attack had begun, and they made another attempt to enter the harbour. They ran aground and were fired on by the destroyer USS Helm before escaping.

By that point, HA-19 had taken too much damage. Smoke and fumes were filling the already partially flooded sub, and Sakamaki again lost consciousness. When he recovered, the submarine was grounded. Sakamaki ordered the sub to be abandoned, lit the self-destruct fuse, and swam for the shore.

Hours after Sakamaki was taken prisoner, his submarine was discovered a mile offshore. The fuse hadn’t worked, and his vessel was captured.

The first prisoner of war 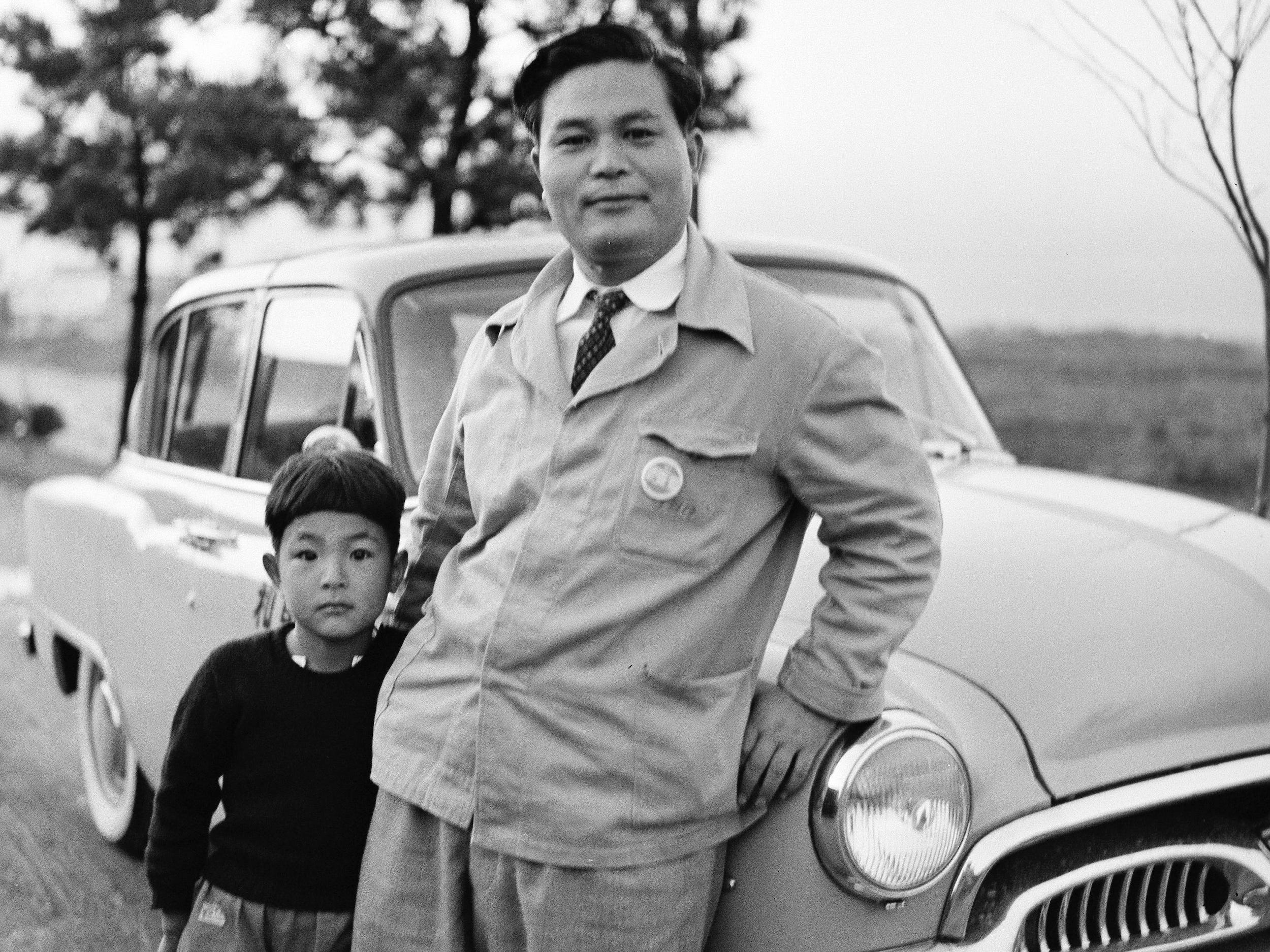 AP Photo/GKKazuo Sakamaki with his son at the Toyota plant where he worked, in Tokyo, November 21, 1956.

The body of Sakamaki’s drowned crew mate was discovered the day after he was captured. He asked the Americans to let him commit suicide. When that was denied, he requested they kill him.

“My honour as a soldier has fallen to the ground,” he said. “Thus, I betrayed the expectations of our 100,000,000 people and became a sad prisoner of war disloyal to my country.”

Sakamaki spent the rest of the war as a prisoner and was released after the war ended. He wrote a memoir soon after he returned to Japan, revealing that he received hate mail from people angry he hadn’t committed suicide.

The HA-19 was taken on a tour of 41 states in an effort to encourage Americans to buy war bonds. It is now on display at the National Museum of the Pacific War in Fredericksburg, Texas.

In the decades since the attack, the remains of the other submarines, including the two that disappeared, have been found on the seafloor near Pearl Harbour. In 1960, one was raised and returned to Japan, where it is on display. The others are considered both historic sites and war graves.