The Army's new adviser unit is supposed to help fight drug cartels in Colombia, but some think they're being deployed to send a message to neighbouring Venezuela 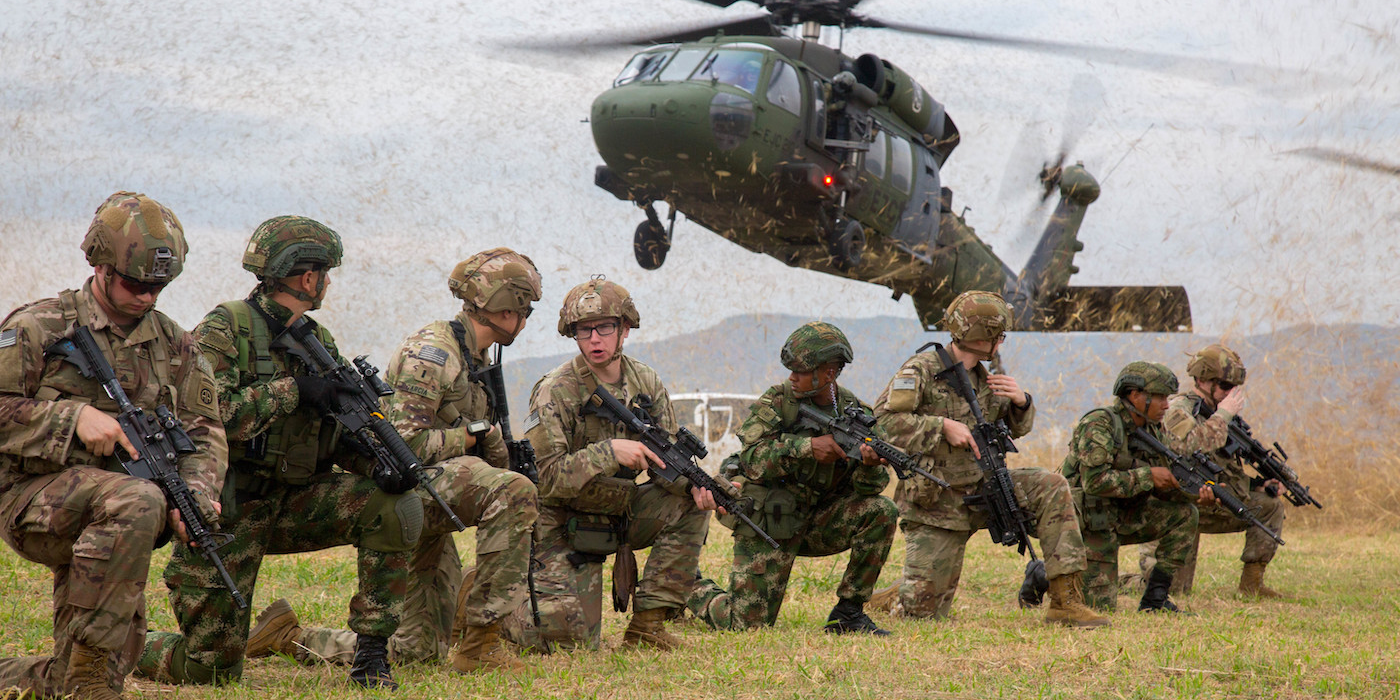 US Army/Sgt. Andrea Salgado-RiveraMembers of the US Army’s 82nd Airborne Division and the Colombian National conduct exercise simulating the securing of an airfield at Tolemaida Air Base, in Nilo, Colombia, January 25, 2020.

An advisory team from the Army’s 1st Security Force Assistance Brigade will arrive in Colombia on June 1 to support US counter-narcotics cooperation with Colombia, the US military command responsible for the region said Thursday.

The deployment, the first to the region by an SFAB, comes as cocaine production is rising in Colombia, which the US says the soldiers will help train Colombian forces to address. But the US’s years-long effort to oust Venezuelan President Nicolas Maduro has raised suspicion that the deployment is meant as a message to Venezuela.

The company-size team of US soldiers will support US-Colombia operations “by training, advising, and assisting host units,” according to US Southern Command. SFABs are the Army’s first unit created with that as its core mission. 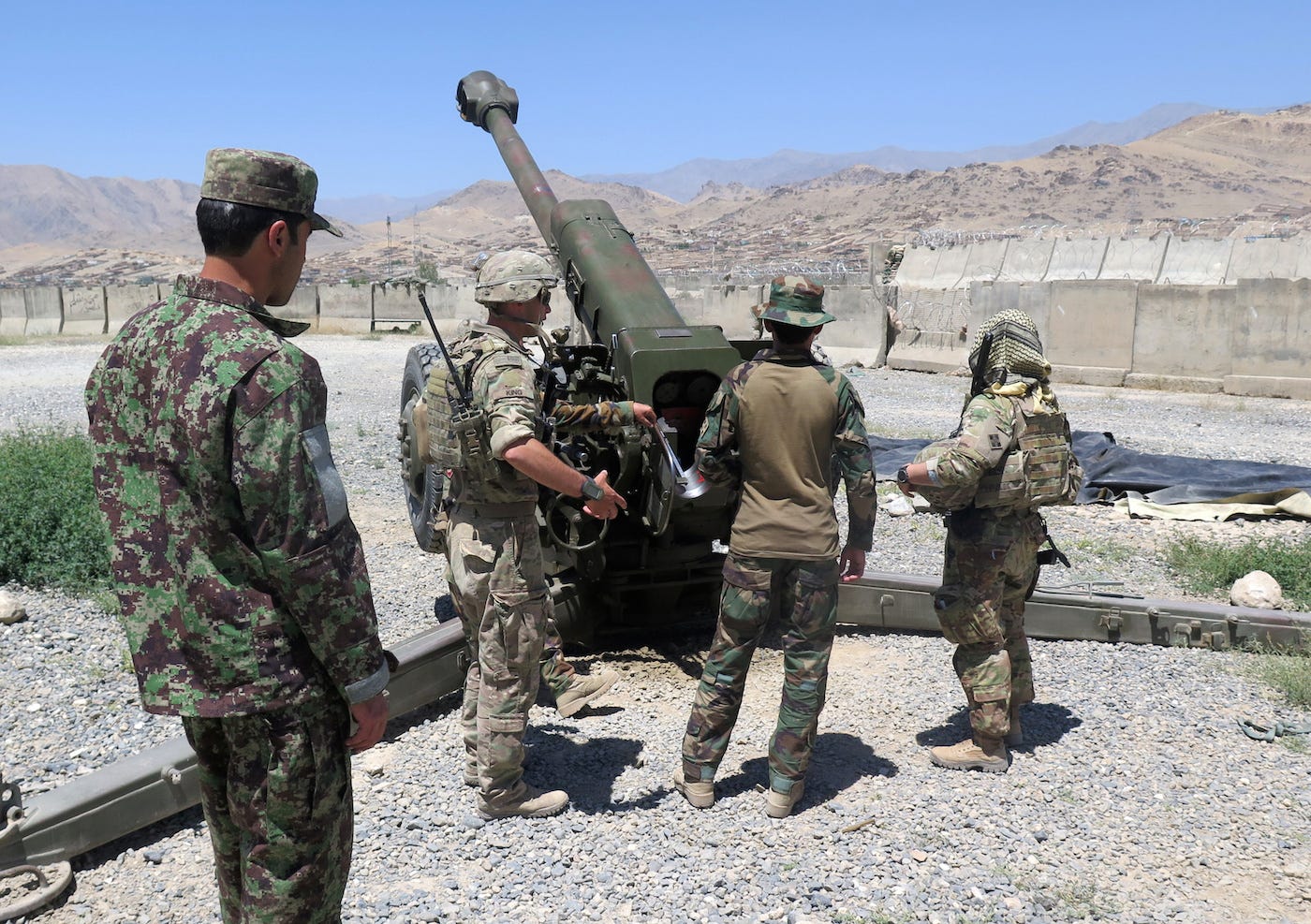 REUTERS/James MackenzieMembers of the US Army’s 1st Security Force Assistance Brigade work with Afghan soldiers at an artillery position on an Afghan National Army base, August 6, 2018.

The deployment is in support of the Enhanced Counter-Narcotics Operations announced by the US on April 1, which has also seen Navy and Air Force assets deployed to the Caribbean and Eastern Pacific.

Cultivation of coca leaf, cocaine’s main ingredient, has climbed steadily in Colombia over the past decade, reaching 212,000 hectares in 2019. Cocaine production capacity also rose to 951 metric tons in 2019, up from 879 metric tons in 2018.

The Trump administration has pressured Colombia, the world’s biggest producer of cocaine, to do more to combat drug production. Colombia’s military has been heavily involved in the eradication of coca plants, which has continued amid a coronavirus shutdown.

Eradication “is a Colombian domestic security mission/effort,” Col. Kimeisha McCullum, a spokesperson for US Army South, said in an email when asked if US soldiers would take part in such activities. Colombia’s defence minister said Thursday evening that the US troops wouldn’t participate in military operations.

The deployment is “an opportunity for us to expand our cooperation with [Colombia] and focus on transnational counter-narcotics in order to advise and provide assistance” against threats to stability in the region, McCullum added. 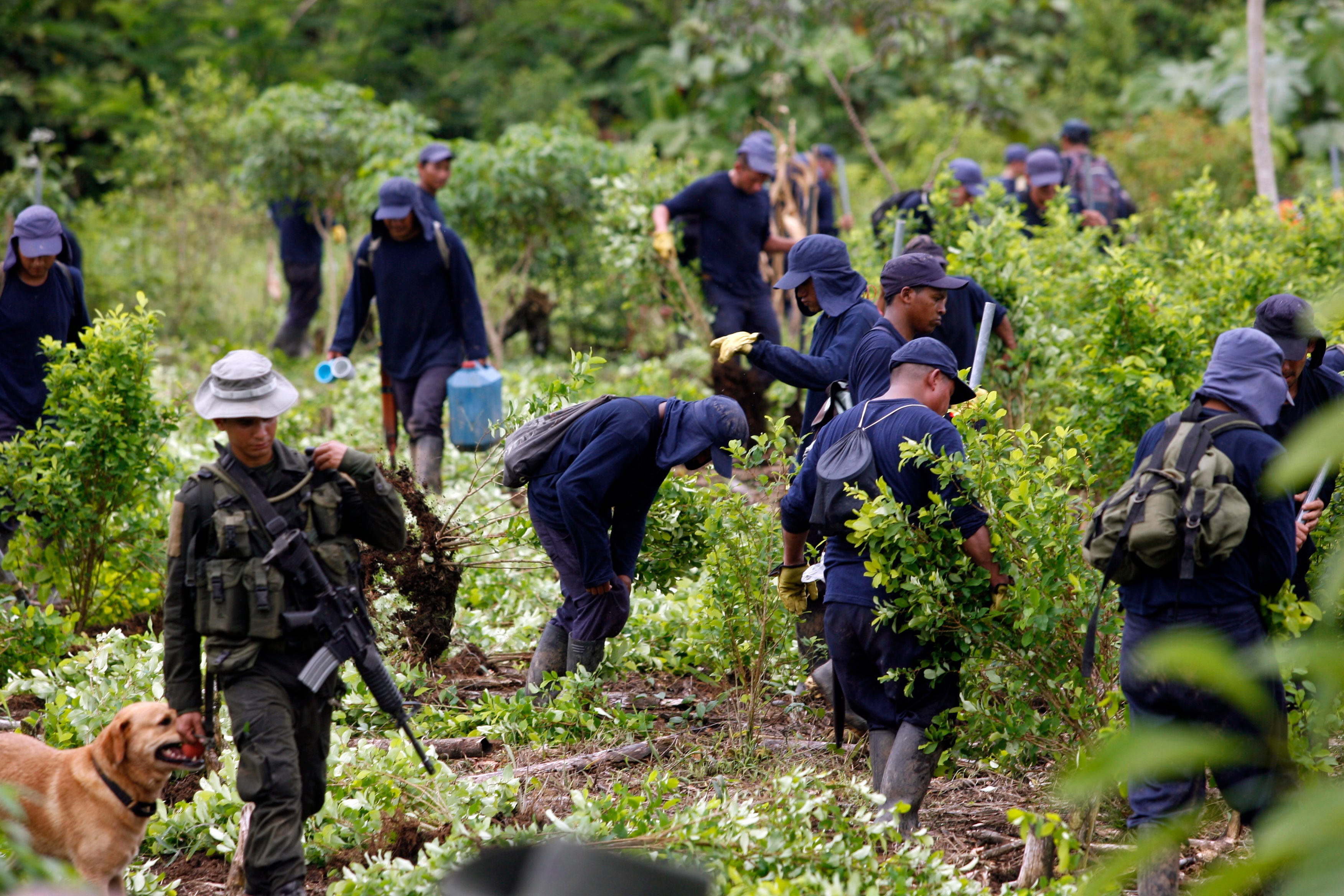 In the current context, reaction to the deployment in Colombia is likely to be mixed, according to Sergio Guzmán, director of the advisory firm Colombia Risk Analysis.

“A lot of people want the US to be more involved in efforts to fight drug trafficking. Others believe it’s a more overt form of interventionism, and their real intent is to be a deterrent to Venezuela,” Guzmán said Thursday.

Guzmán said it was unclear how the new deployment would differ from other deployments of US forces currently in Colombia.

“The fanfare and the timing of the announcement suggest that although their stated goal is anti-narcotics, the intent may be different,” Guzmán said, citing the US naval deployment in the Caribbean.

Farmers in Catatumbo, a coca-producing region on the border with Venezuela, responded to reports that US troops would deploy to their area with protests. One representative called it “a foreign invasion.” 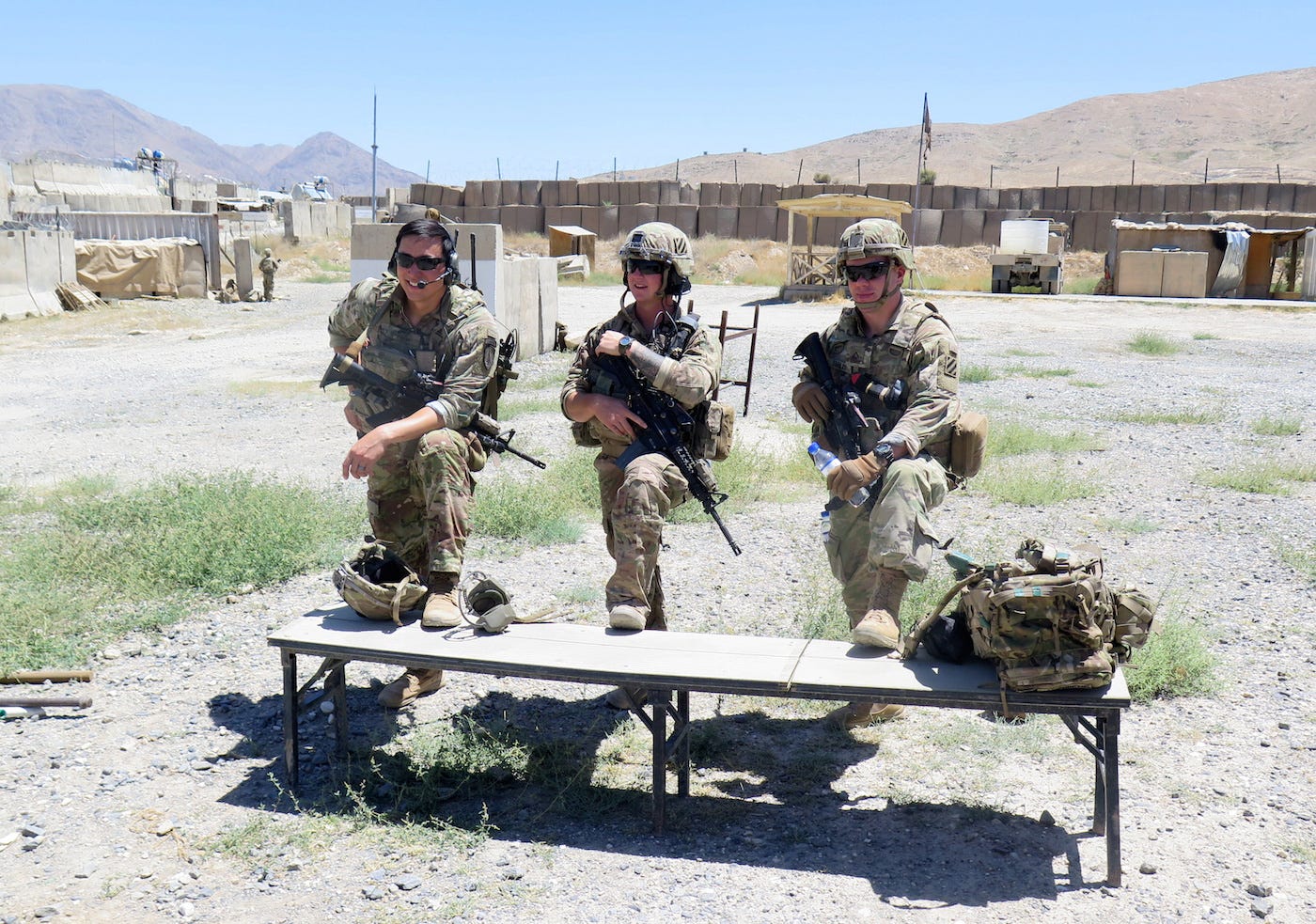 The US’s military involvement in Colombia dates to the 1950s and 1960s. It has included both counter-insurgency and counter-narcotics elements, according to Robert Karl, a historian and expert on the conflict in Colombia. Karl believes the intent of this deployment will likely be revealed by where SFAB personnel spend their time.

Southern Command said SFAB members will remain with host units while working in what the Colombian government has designated “priority areas,” where they will focus on logistics, services, and intelligence capabilities directly supporting US-Colombia counter-narcotics efforts.

McCullum declined to say where SFAB teams were headed, citing operational security, but said they will work with Colombia’s army across the region “where drug trafficking remains a threat for local communities and international partners.”

The US Embassy said the focus will be in “Future Zones,” areas heavily affected by crime, violence, and poverty, where the Colombian government wants to encourage development.

Reports in Colombian media identified those zones as the Bajo Cauca region and southern Córdoba in northwest Colombia; the Catatumbo region and Arauca on the eastern border with Venezuela; and in Nariño on the Pacific coast. 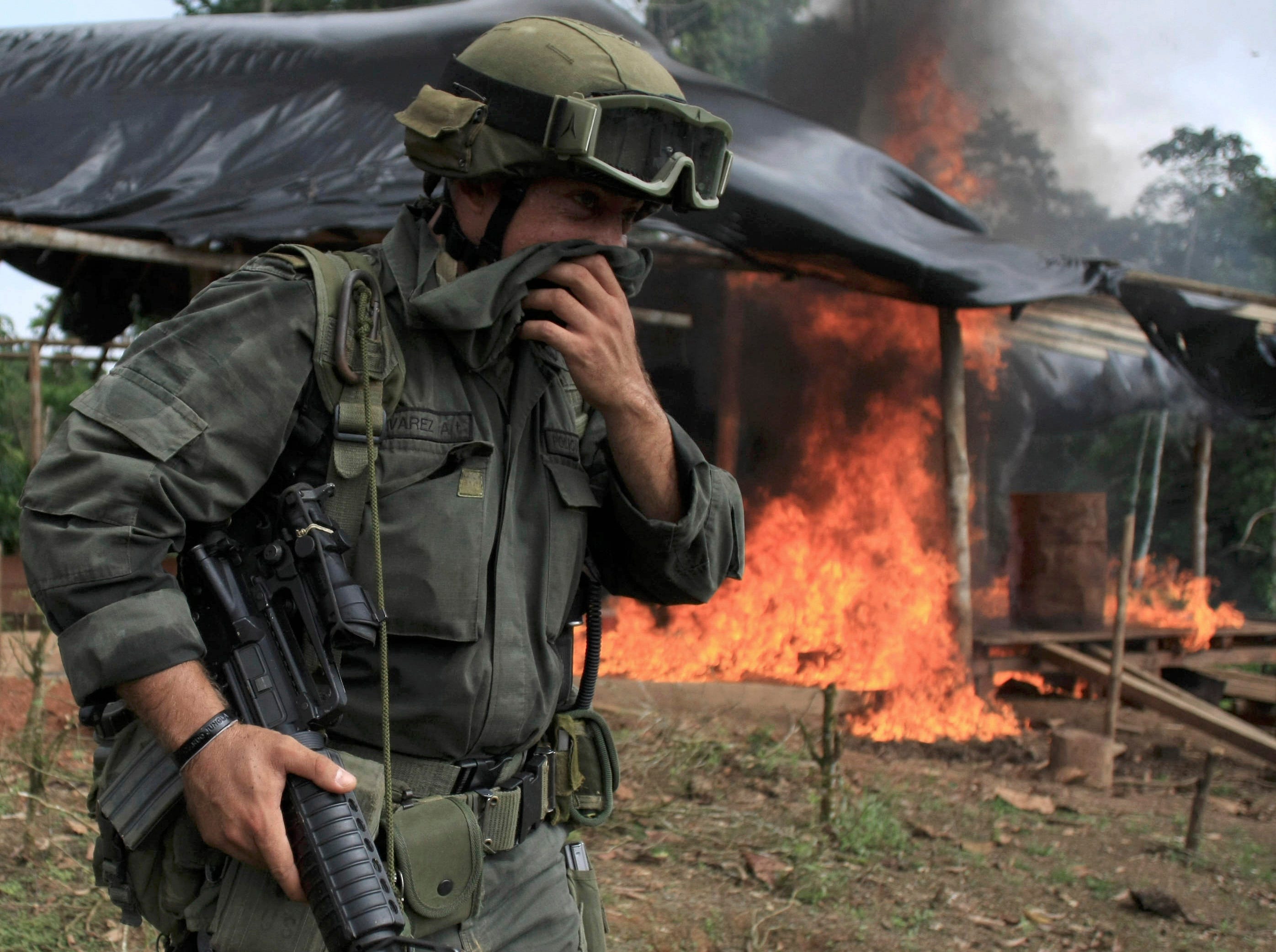 (AP Photo/William Fernando Martinez)A member of a Colombian anti-narcotic police squad covers his face in front of a burning hut during a raid to destroy a coca laboratory near Tumaco, in Colombia’s southern state of Narino, June 8, 2008.

Criminal activities are present in each of those regions. Nariño has some of the country’s most intense coca cultivation, while the northwest is the site of drug cultivation and illegal mining and is a valuable drug-trafficking corridor contested by multiple criminal groups. Catatumbo is also coca-cultivation hub; it and Arauca’s location on the border make them focal points for several types of smuggling.

“This will be really interesting to see if this mission cycles through those all of the zones, so if it’s a nationwide footprint, or if it’s focused in the Venezuelan border region,” Karl said.

Karl doubted the deployment would yield counter-narcotics gains but said it could change how the Colombian military treats some criminal groups.

Despite a recent drop in homicides nationwide, “attacks on social activists and local leaders were up 53% from January to April … so these local murders are still taking place at a very, very high rate,” Karl said. “So it’s interesting to think of what does this deployment mean in that context. It’s not just that it’s going to be ineffectual. I think this could introduce new cycles of violence as well.”