16 things you never knew about Halloween, from how it got its name to why we give out candy 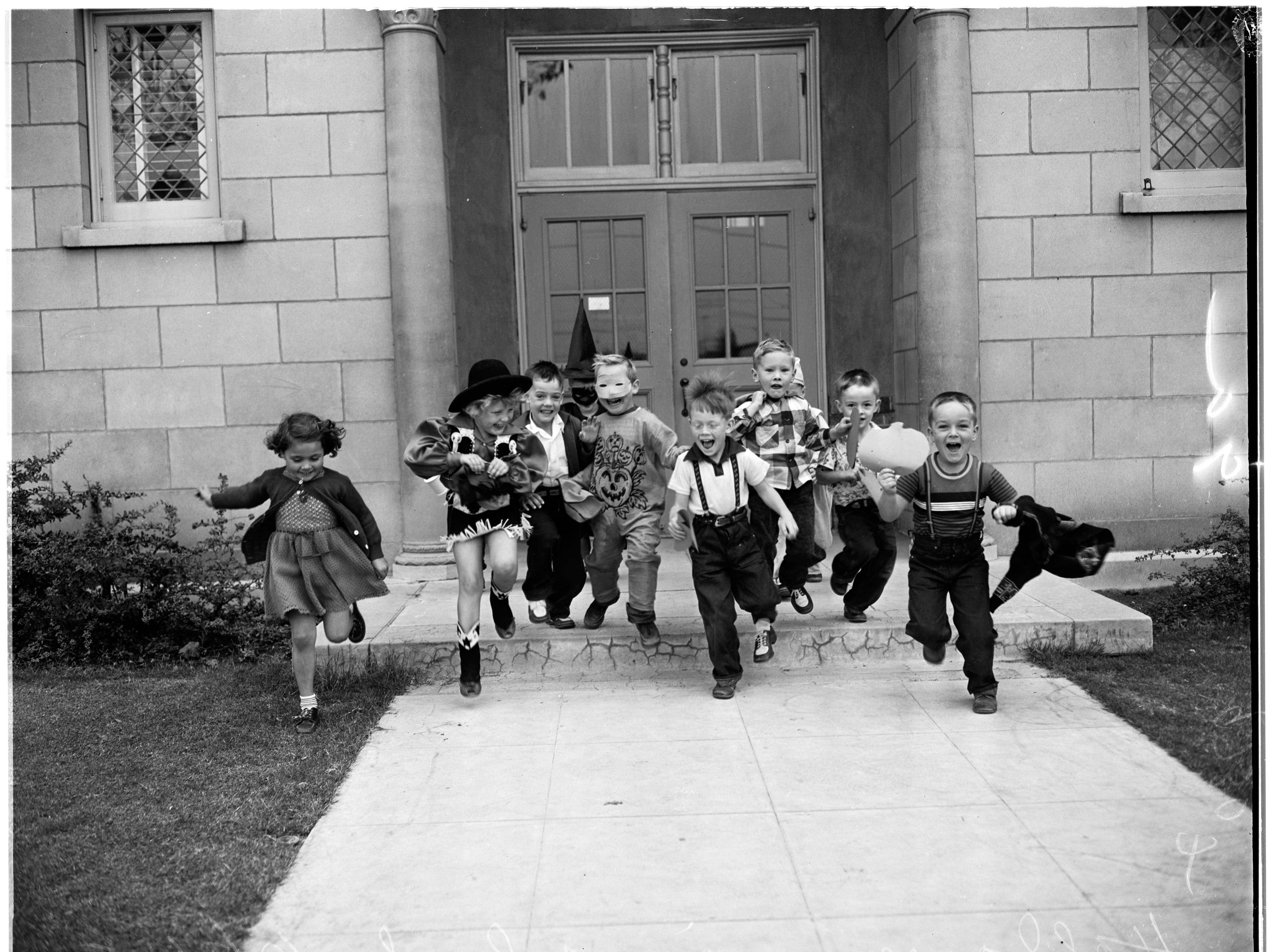 Los Angeles Examiner/USC Libraries/Corbis via Getty ImagesChildren have been dressing up in costumes for decades.

While Halloween will look a little different this year, the spooky decorations and delicious fall treats will surely make an appearance. Much of Halloween’s most iconic traditions are deeply rooted in history, dating back to ancient Ireland.

Ever wondered why jack-o’-lanterns exist? Or why people eat apples in October? And why black cats are so mysterious?

The name “Halloween” is an ultra-condensed version of “All Hallows’ Eve.” 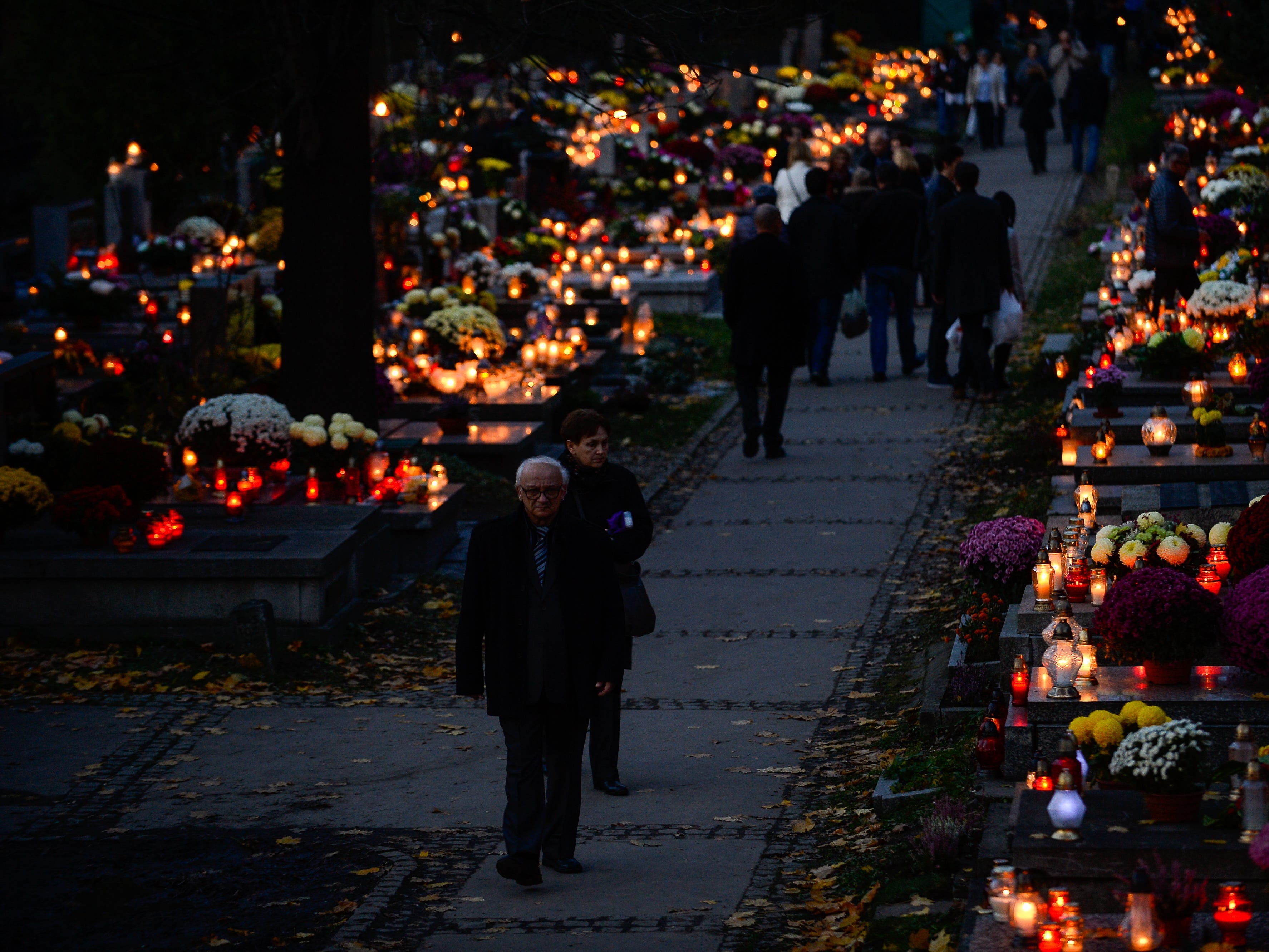 According to Merriam-Webster, the name “Halloween” originally comes from All Hallows’ Eve – the second night of a festival called Samhain, dating back to the pagans in Ireland.

“Hallow” comes from an Old English adjective that means “holy,” and “eve” refers to the nighttime setting. All Hallows’ Eve was also referred to as All Hallows’ Even – which was shortened to “Hallow-e’en” by the 16th century.

We eventually dropped the apostrophe and dash in the 18th century, and the rest is history.

A 2,000-year-old Celtic festival called Samhain is the origin of Halloween, and Wiccans still celebrate it today. 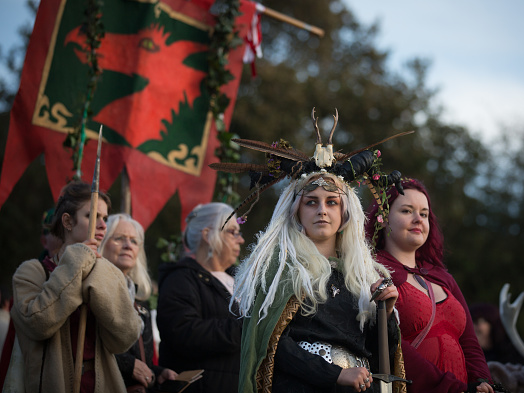 Matt Cardy/Getty ImagesSamhain being celebrated in Glastonbury, Ireland, in 2017.

The Celts were pagans who lived in what is now Ireland, and they celebrated the new year on November 1. Their festival, Samhain (pronounced “sow-in”), marked the end of fall’s harvest and ushered in winter, a season that signified death and darkness for the Celts.

They believed that on the night before the shift, October 31 – called All Hallows’ Eve – the worlds of the living and the dead intersected. The ghosts roaming Earth were thought to help predict the future, so the Celts welcomed them with sacrificial bonfires and by dressing in costumes of animal heads and skins.

Modern-day Wiccans and neopagans celebrate a similar form of Samhain, and it is considered their most important festival of the year.

If it weren’t for the wave of immigrants fleeing the Irish Potato Famine, we might not have Halloween in America. 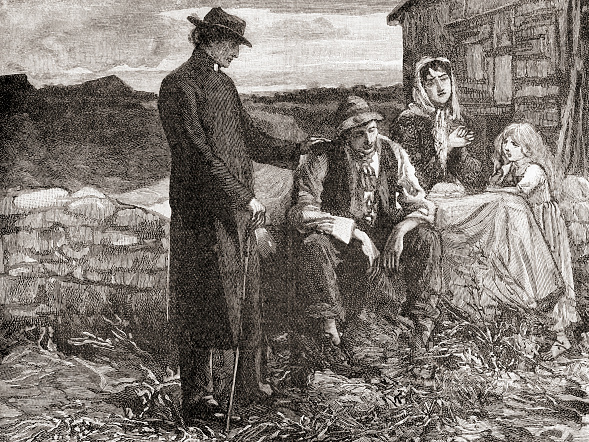 Universal History Archive/UIG via Getty ImagesDepiction of Father Mathew comforting a family stricken by the famine in Ireland, circa 1845.

By the middle of the 19th century, some pockets in America celebrated a mild form of Halloween, including telling ghost stories, causing mischief, and just generally acknowledging autumn.

But Ireland’s devastating Potato Famine that started in 1845 caused mass immigration – more than 1.5 million Irish people fled to America during that time. With them, they brought their long-held Halloween traditions, and the soon-to-be holiday caught on quickly, spreading nation-wide.

Women used to play games on Halloween to find out what their future husband would be like. For many women in the early 20th century, Halloween was about finding love.

Games like Snap Apple were popular, in which participants could only use their teeth to bite into an apple suspended from a stick, and the first one to succeed would marry.

Women also used to toss apple skins over their shoulders, hoping the scraps would land on the floor in the shape of their future husband’s initials.

Bobbing for apples dates back to an ancient Roman festival called “Ponoma.” 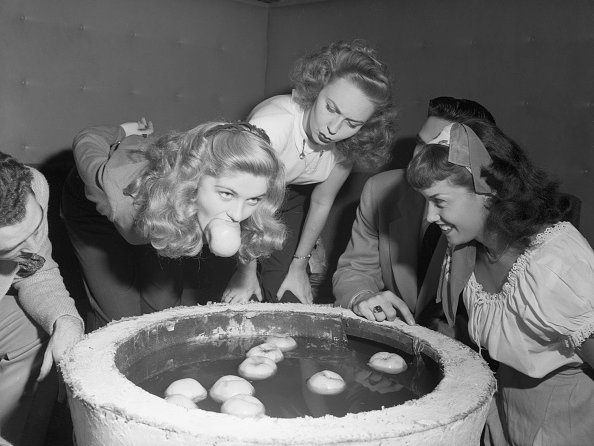 Bettmann/Getty ImagesWomen bobbing for apples in the 1950s.

When the Roman Empire overtook the Celts around 43 AD, they combined their traditions with those of Samhain.

The second day of their new year festivities was “Ponoma,” meant to honour the eponymous goddess of fruits and trees, which explains bobbing for (and eating) apples around this time of year.

During the 18th century, “bobbing” rose in popularity in the British empire and was yet another way to flirt with a potential mate. Despite a brief wane in popularity, the game was revived by the Irish when they immigrated to America.

It has yet to be seen whether this tradition will remain in a post-coronavirus world.

Halloween was “tamed” in the beginning of the 20th century because it was getting too dangerous. 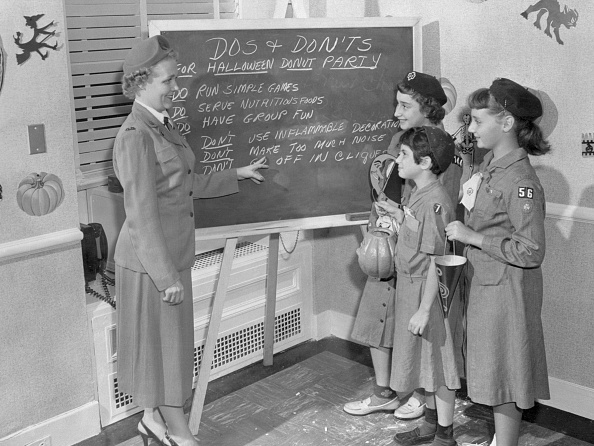 Bettmann/Getty ImagesA teacher in 1956 explains the ‘dos and don’ts’ of a Halloween party.

Along with Roosevelt’s New Deal, the 1920s and ’30s came with a concerted effort to rein in Halloween by making it family oriented and civilized.

Communities came together for parades and town-wide parties, and newspapers encouraged parents to remove “grotesque” and “superstitious” elements from these celebrations.

The holiday became increasingly youth-oriented thanks to the 1950s baby boom. 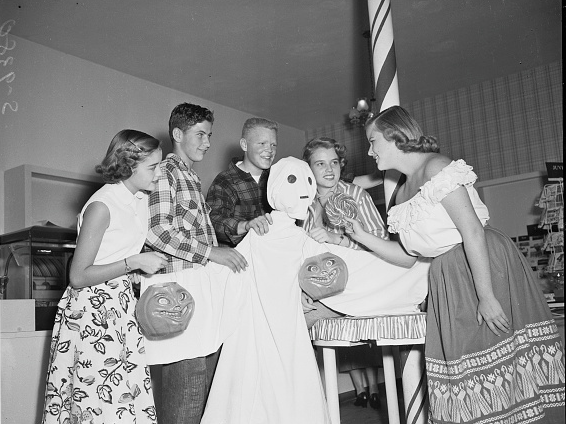 By the time the 1950s hit, American communities had succeeded in removing the taboo from Halloween, including vandalism, which had previously run rampant on October 31.

The baby boom of the ’50s also made the holiday more family oriented, and Halloween parties began to move to school classrooms and homes. Trick-or-treating was also revived around this time and has been steadily practiced since.

The popularity of lighting fires on Devil’s Night can be traced to 1980s Detroit. 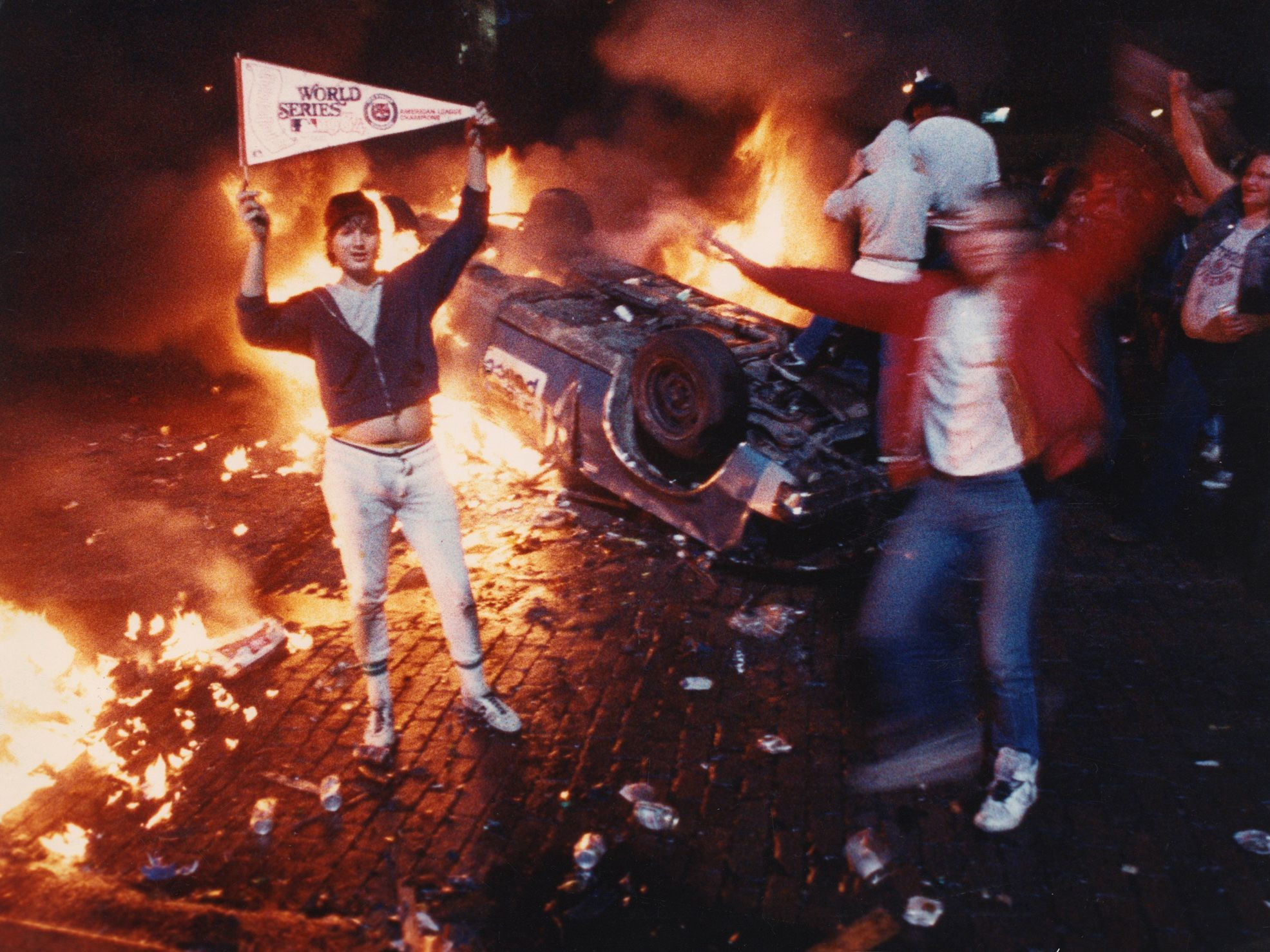 Robert Kozloff/APDetroiter Bubba Helms is pictured next to the infamous October fires.

Devil’s Night – the night before Halloween that induces mischief of all sorts – became associated with arson because of a surge of Detroit fires in the 1980s.

The Detroit Tigers won the World Series in October of 1984, which ignited over 297 “celebratory” fires. There were also repeated acts of arson in the city the year before, but the fires of 1984 were “the worst fires since the riots of 1967,” according to a Detroit Fire Department chief.

After that, the country – especially Detroit – saw a rise in Devil’s Night fires. Detroit even renamed the holiday Angel’s Night to combat the debauchery.

We eat candy on Halloween because of “soul cakes,” a sweet treat used to distract ghosts in the Middle Ages. 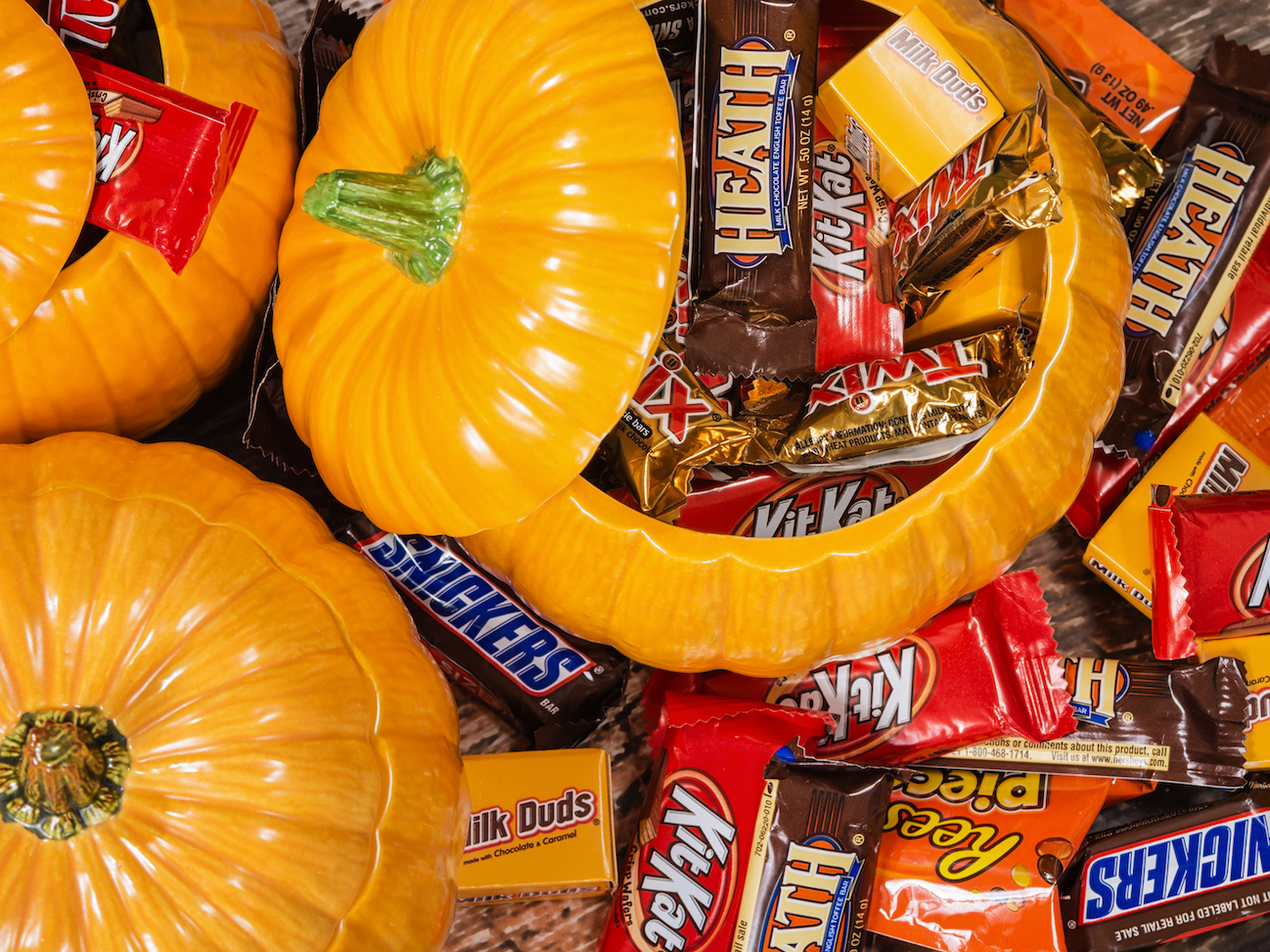 Halloween was largely Catholicized around the Middle Ages … and so were the sweets.

Around 1200 – in places like Britain, Ireland, and Germany – “soul cakes” rose in popularity. Made of expensive spices like saffron and currant, these cakes were meant to both honour and distract roaming ghosts on October 31.

As time went on, beggars would walk around door-to-door asking for “soul cakes” from the wealthy, offering to pray for their dead relatives in return. But instead of saying “trick or treat,” they’d say: “A soul cake, a soul cake, have mercy on all Christian souls for a soul cake!”

Americans spent upwards of $US8.8 billion on Halloween last year — making it the second-largest holiday industry after Christmas. Scott Olson/GettyA wall of masks in a Halloween store.

According to the National Retail Federation, Americans spent nearly $US9 billion on Halloween in 2019. This year, the NRF expects consumer spending to dip, predicting $US8.05 billion to be spent on the holiday.

However, in its annual survey on how people spend their Halloween money, the NRF predicts individual spending to go up: “Those who are celebrating plan to spend $US92.12 on average compared with $US86.27 in 2019. Consumers are doing what they can to still make it a special event by spending a little more on home decorations, candy and greeting cards. “ 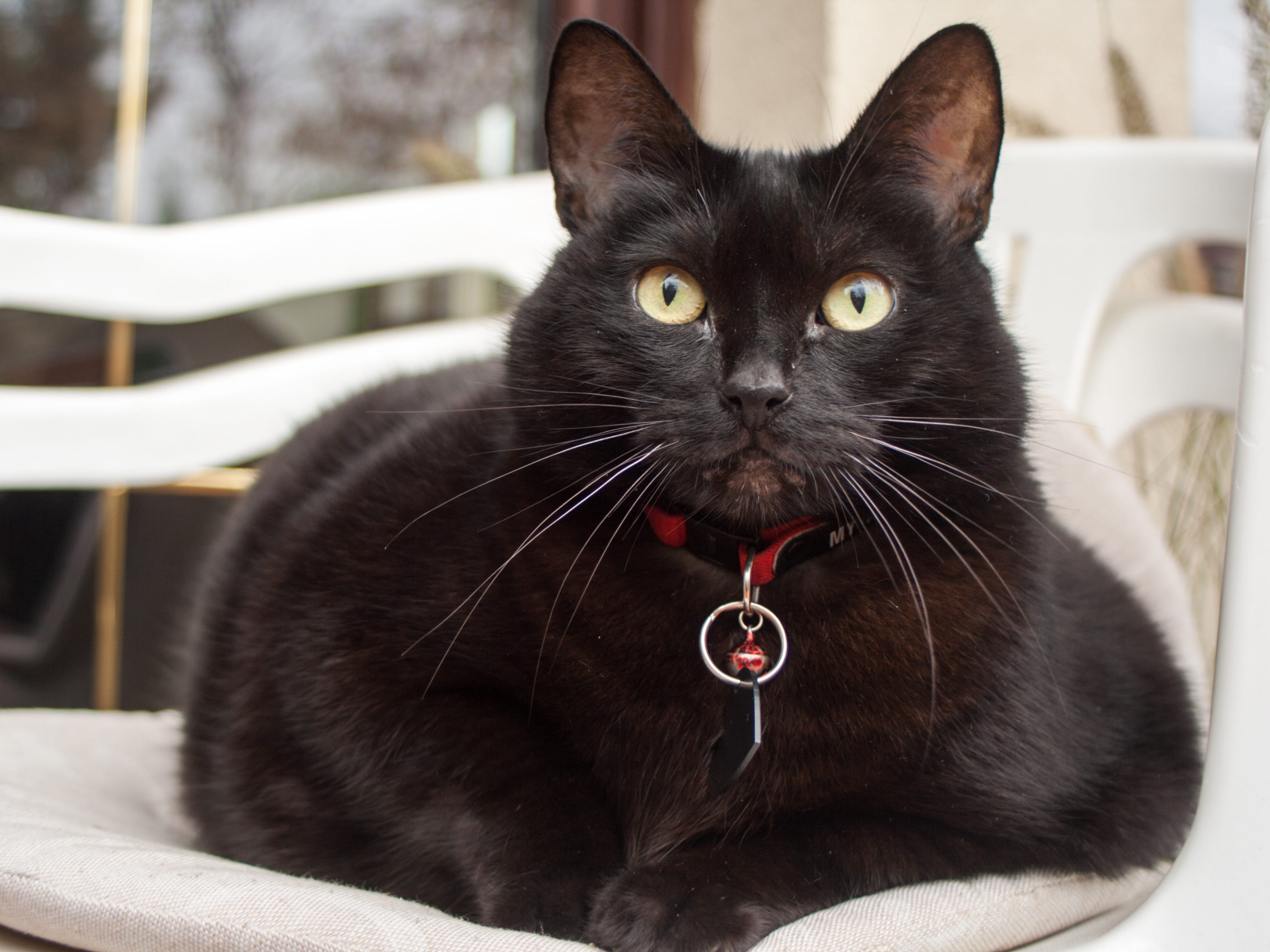 Back in the 14th century, the association between black cats and the devil was so prevalent that people allegedly believed they were causing the Black Death pandemic and tragically exterminated them as a result.

Later, when the 16th-century hysteria over witchcraft was at its peak, suspicious Europeans associated black cats with so-called witches, believing them to be their “familiars” – and this notion spread all the way to America during the Salem Witch Trials.

Owls are also creatures associated with Halloween — in medieval times, hearing a single hoot meant death was nigh. Ilya Naymushin/ReutersOwls are another animal associated with Halloween.

For medieval Europeans, seeing an owl meant that danger was coming – even death. Because the birds are active at night, they were thought to partake in illicit activities and were often depicted with or as witches. 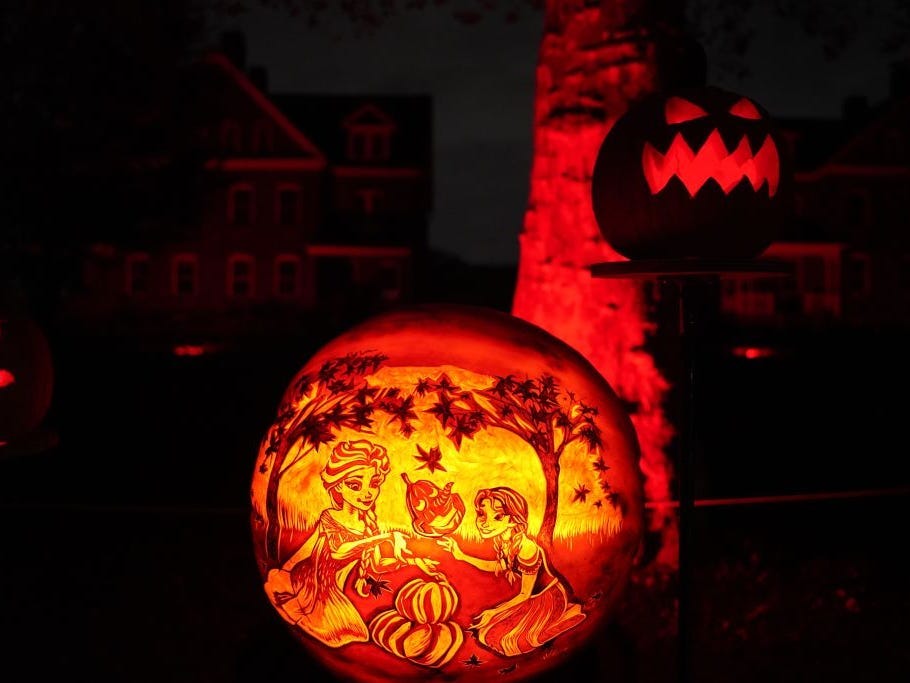 Jack-o’-lanterns come from an old Celtic legend about a man named “Stingy Jack,” who used to play tricks on the devil. After Stingy Jack died, the devil sent him into the night with only burning coal, which Jack put into a carved turnip to light his way.

According to folklore, Stingy Jack’s ghost still wanders the Earth, so the Irish used to carve scary faces into turnips and put them in windows to scare his spirit away. When Irish immigrants came to America, they found that the pumpkin – which they had never encountered before – was a much better fit for the tradition.

“Sexy” Halloween costumes date back to the 1970s. 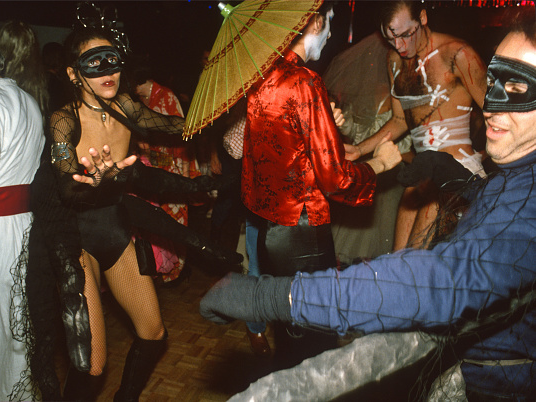 The sexual liberation of the 1970s brought with it gay visibility, feminism’s second wave, and a newfound sense of freedom. Gay parades in areas like Greenwich Village and Key West started to emerge – and with them, sexy costumes.

Lesley Bannatyne, author of “Halloween. An American Holiday, An American History,” and “Halloween Nation,” told Bustle, “The fantastical gay parades of the ’60s and ’70s showed the rest of the adult world how outrageous costumes could be. Halloween costumes often push at the boundaries of what we’ll accept for everyday reality. Sexuality could be expressed.”

You can have a very real fear of Halloween — it’s called samhainophobia. 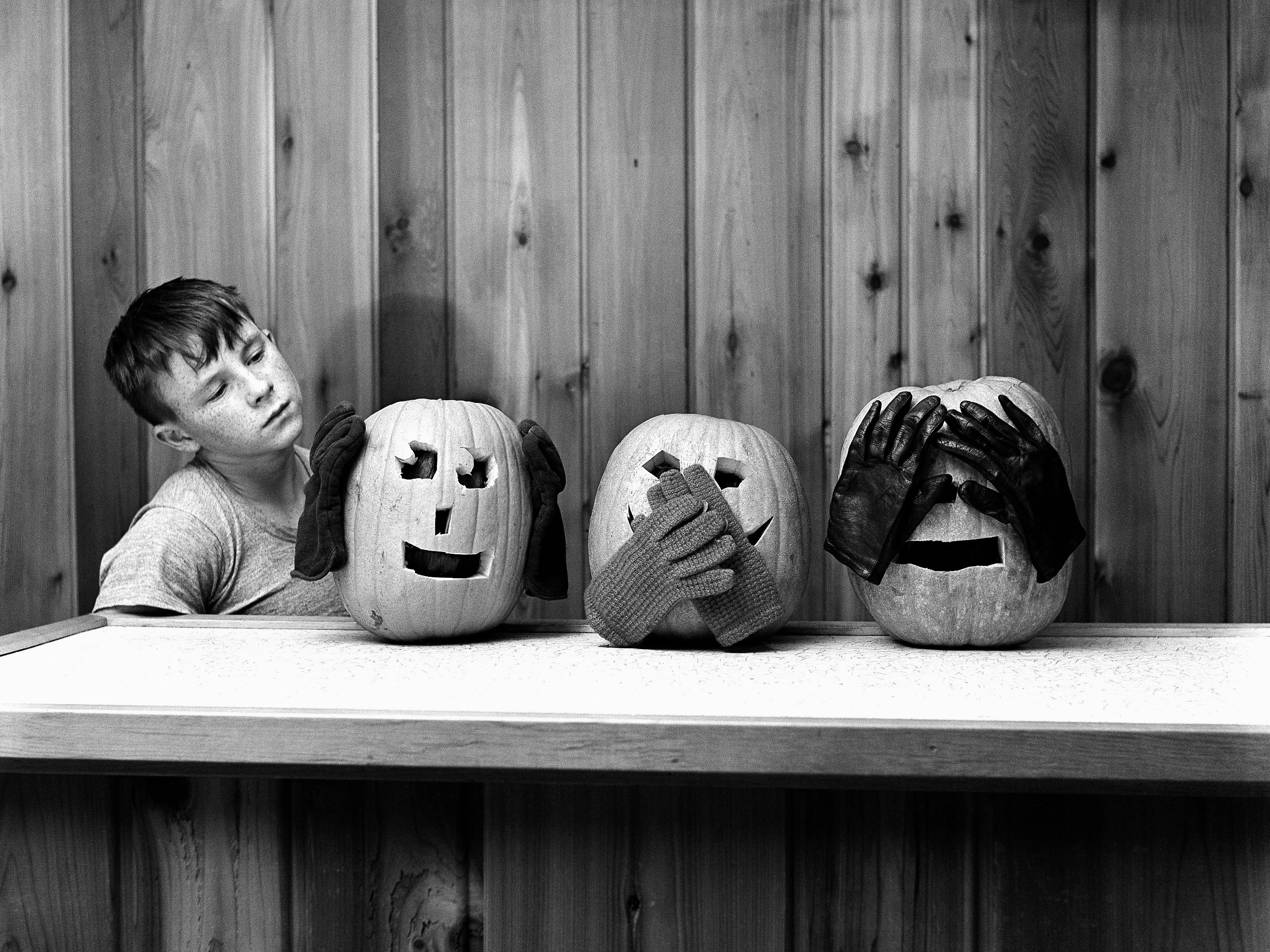 Forbes defines samhainophobia as “a persistent, abnormal, and unwarranted fear of Halloween, despite conscious understanding by the phobic individual and reassurance by others that there is no danger.”

But don’t get it confused with simply not wanting to dress up or pass out candy – samhainophobia is a clinical, psychological condition, much like arachnophobia or agoraphobia. There are treatments available for it. 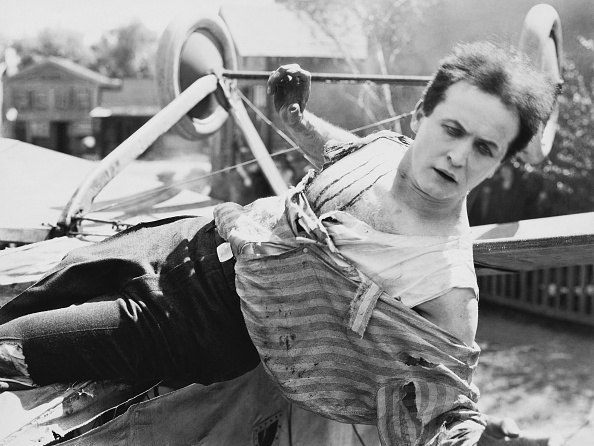 Hungarian-born magician Harry Houdini dazzled audiences with his impressive stunts – like jumping off bridges while handcuffed – for over 30 years.

But after a show on October 24, 1926, at the height of his fame,Houdini was rushed to the hospital with what seemed to be appendicitis. Earlier that week, a fan repeatedly punched him in the stomach to see if Houdini really could “resist” the blows like he claimed. But many believe that the punches caused his appendix to rupture, though no one knows for certain.

A week later, on October 31, Houdini died. Mystery still shrouds his death, and there are theories claiming that the Spiritualists – a group of “psychics” that Houdini campaigned against – planned his assassination via poison.

On his deathbed, Houdini promised his wife that he would communicate with her from the afterlife (likely to snub the Spiritualists). She held séances to try to reach him for 10 years before giving up, but fans and fellow magicians keep the tradition of having séances on October 31 alive, attempting to channel the dead every Halloween night.