Welcome to homecoming at the University of Missouri, or “Mizzou,” as students and alumni like to say. The world’s first homecoming tradition began at Mizzou in 1911 when football coach Chester Brewer invited alumni to “come home” for the annual football game against long-standing rival, the University of Kansas.

With approximately 34,658 enrolled students, Mizzou still holds the largest student-run homecoming in the nation, including a parade, blood drive, talent competition, tailgate, and campus decorations, according to Chancellor Bowen Loftin.

Mizzou is located in Columbia, Missouri, and is almost equidistant from St. Louis and Kansas City. The rivalry with Kansas dates back to pre-civil war days, making it the oldest college rivalry west of the Mississippi.

Mizzou owes the homecoming tradition to former football coach Chester Brewer who in 1911 invited alumni to 'come home' for the annual rivalry game against the University of Kansas. Around campus the buildings are decorated with Mizzou's black and gold colours. Here is a giant tiger tail coming out of the student bookstore. Here's more proof this is a proud college town. Impressively, the house decs are largely made out of construction paper that's tightly rolled and glued to the board. After Homecoming, some of these designs are burned in a celebratory bonfire. Hours before the homecoming game, Mizzou hosts a parade throughout campus and downtown Columbia. Here is 'Marching Mizzou' performing in the streets. Now it's time for the annual homecoming game! As you can see Mizzou fans are serious about wearing school colours to the game. In order to sit in the first row of 'Tiger's Lair,' the student cheering section, you have to get painted up, sing, chant, and stand throughout the game. And that is never a problem for Mizzou fans. Mizzou's mascot, 'Truman the Tiger' is named after Missouri-born President Harry S. Truman. Before every game Truman stands with students to welcome kick-off. During each game Mizzou students shout 'M-I-Z' across the field to the alumni section. The alumni responds 'Z-O-U' until the students stop chanting. This is what it sounds like. 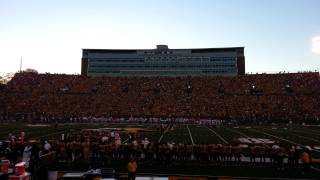 Other campus traditions revolve around this row of six columns on 'Francis Quadrangle.' In 1892, Academic Hall was lost in a fire and all that remained were these columns. Board members wanted to knock down the columns and give the school a fresh start after the fire. Missouri's then Governor David Francis, decided the columns should stay on the Columbia campus. This is a bust of Francis on Francis Quadrangle. Francis' buffed bronze nose comes from the student tradition of rubbing his nose for good luck before an exam. I rubbed his nose before the football team's game against Vanderbilt. Obviously it worked.