The $600 boosted unemployment benefit just expired. Here's how much unemployment checks could drop in your state under the GOP's less-generous replacement plan

Bryan Woolston/ReutersHundreds of people line up outside a Kentucky Career Centre hoping for assistance with their unemployment claims.

The $US600 benefit that the federal government tacked onto state unemployment checks formally expired on Friday – as the level of unemployment claims still top 1 million week after week and lawmakers debate what amount should replace it.

Republicans unveiled their plan on Monday, four days before the enhanced payments were slated to end. And it would scale back weekly benefits for millions of jobless Americans by 44% on average, according to a new analysis from the left-leaning Century Foundation.

The analysis focuses on the initial two-month period with a $US200 supplement under the GOP plan. Federal payouts each week would be reduced by $US400 from the current level of $US600, approved in March under the CARES Act.

Put another way, the Republican plan, called the HEALS Act, would cut weekly benefits from a national average of $US921 to $US521.Around 30 million people are receiving unemployment benefits.

This map shows the per cent difference between the average unemployment benefit in each state under the CARES Act and the $US400 reduction under the HEALS Act. Click to see the values for each state:

In particular, several states experiencing large spikes in coronavirus cases could see the biggest reduction in unemployment benefits. That money for jobless people usually replaces around half their previous earnings but varies greatly across the US. Prior to the pandemic, average weekly unemployment payments nationwide were $US387.

In Florida, a state weathering a surge of infections, the average benefit with the $US600 boost stands at $US849. But implementing the Republican plan would diminish it to $US449, a 47% reduction.

Other states across the South would experience significant weekly benefit cuts as well:

Andrew Stettner, a senior fellow at The Century Foundation, said the $US600 government addition onto state unemployment benefits helped the unemployed make ends meet during the coronavirus pandemic.

Reducing the weekly amount to $US200 as Republicans seek could cause financial hardship for people relying on those benefits, he said.

“Without this money, it leads to economic stress. People may not be able to make rent or keep up their car payments,” Stettner told Business Insider. “They will have a difficult time meeting the basics.”

Read more: Here are the 6 biggest sticking points Democrats and Republicans need to resolve as they race to finish a coronavirus stimulus bill this week

“That $US600 is helping prop up the entire economy,” Claudia Sahm, director of macroeconomic policy at the Washington Centre for Equitable Growth, told Business Insider. She supports extending the beefed-up payments and gradually phasing down their amount size as the unemployment rate falls.

Senate Republicans unveiled their unemployment proposal as part of a $US1 trillion stimulus package. It would keep a $US200 federal supplement to unemployment checks through September.

In October, it would be replaced with a new system capping benefits at 70% of a jobless person’s past earnings, with the federal government supplementing a maximum amount of $US500. Some experts, however, say enacting a wage-replacement formula could push overwhelmed state unemployment systems to their breaking point.

Republicans have repeatedly assailed the beefed-up payments, arguing they incentivise people to remain on unemployment. Around two-thirds of people drawing benefits are earning more from the government than their past employer, according to researchers at the University of Chicago.

McConnell said on Tuesday at his weekly press conference that Republicans were seeking a “sweet spot” on federal unemployment payments with their plan – to strike a balance and ensure people can meet basic needs while not disincentivizing work. 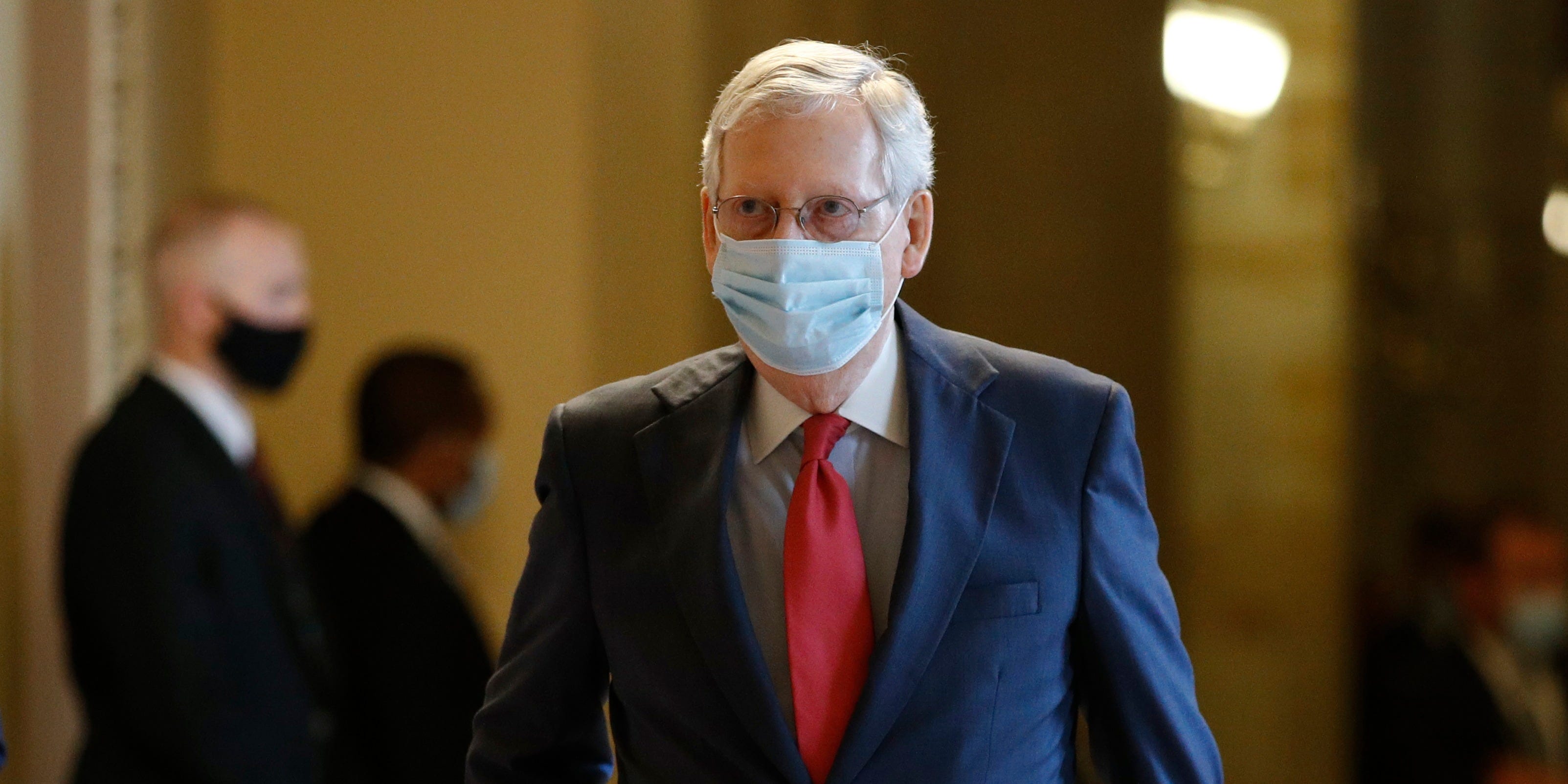 The $US200 level, however, means an income drop ranging from 30% to 50% for 30 million people drawing enhanced unemployment insurance, according to an estimate from Ernie Tedeschi, a former Treasury Department economist in the Obama administration.

Meanwhile, Democrats want to extend the $US600 weekly benefits through January, arguing the economy remains weak and jobs are scarce. They’re fiercely opposed to the plan Republicans introduced.

“The Republican proposal is a textbook case of total indifference to human suffering,” Sen. Ron Wyden said in an interview on Capitol Hill on Tuesday. “I think it’s cruel, it slashes benefits and it sabotages state UI offices.”

Unemployment stands at 11%, down from its historic high of 14.7% in April. Experts project it to remain in the double-digits through this year and say that smothering the virus is critical to stabilizing the economy and putting it on a path to recovery.

But work remains hard to find and the pandemic is stretching on with no end in sight, prompting states to reverse or halt their reopening plans. Out-of-work people outnumber open jobs by four to one, according to the latest data available from the Bureau of Labour Statistics.