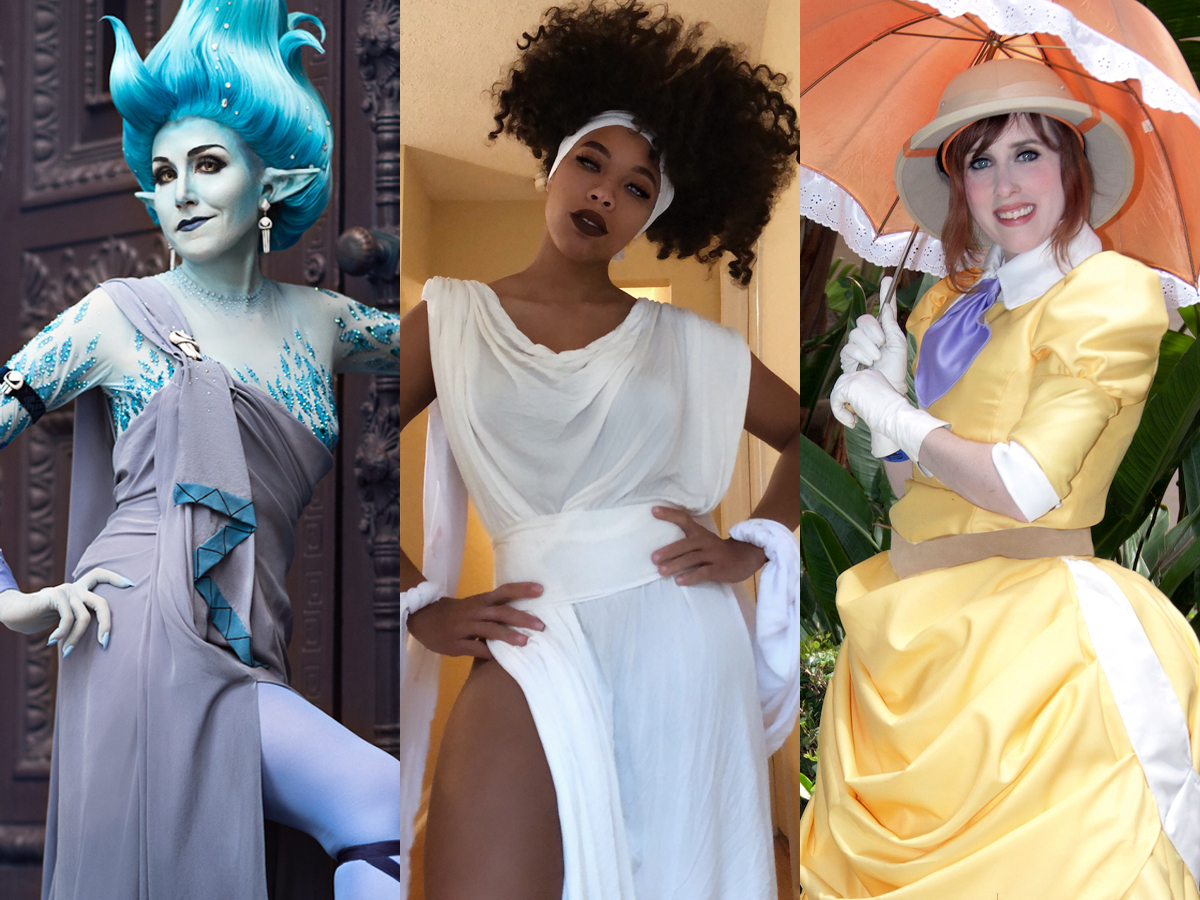 Disney-themed costumes are always some of the most popular looks on Halloween.

That being said, some of the company’s classic characters can look a bit tired as costumes. If you’re looking to switch things up this year, consider taking a look through Disney’s underrated movies, TV shows, and theme-park attractions to find inspiration.

To help out, we’ve rounded up 22 options to try on Halloween.

Kim Possible and her nemesis, Shego, make for a great duo costume. 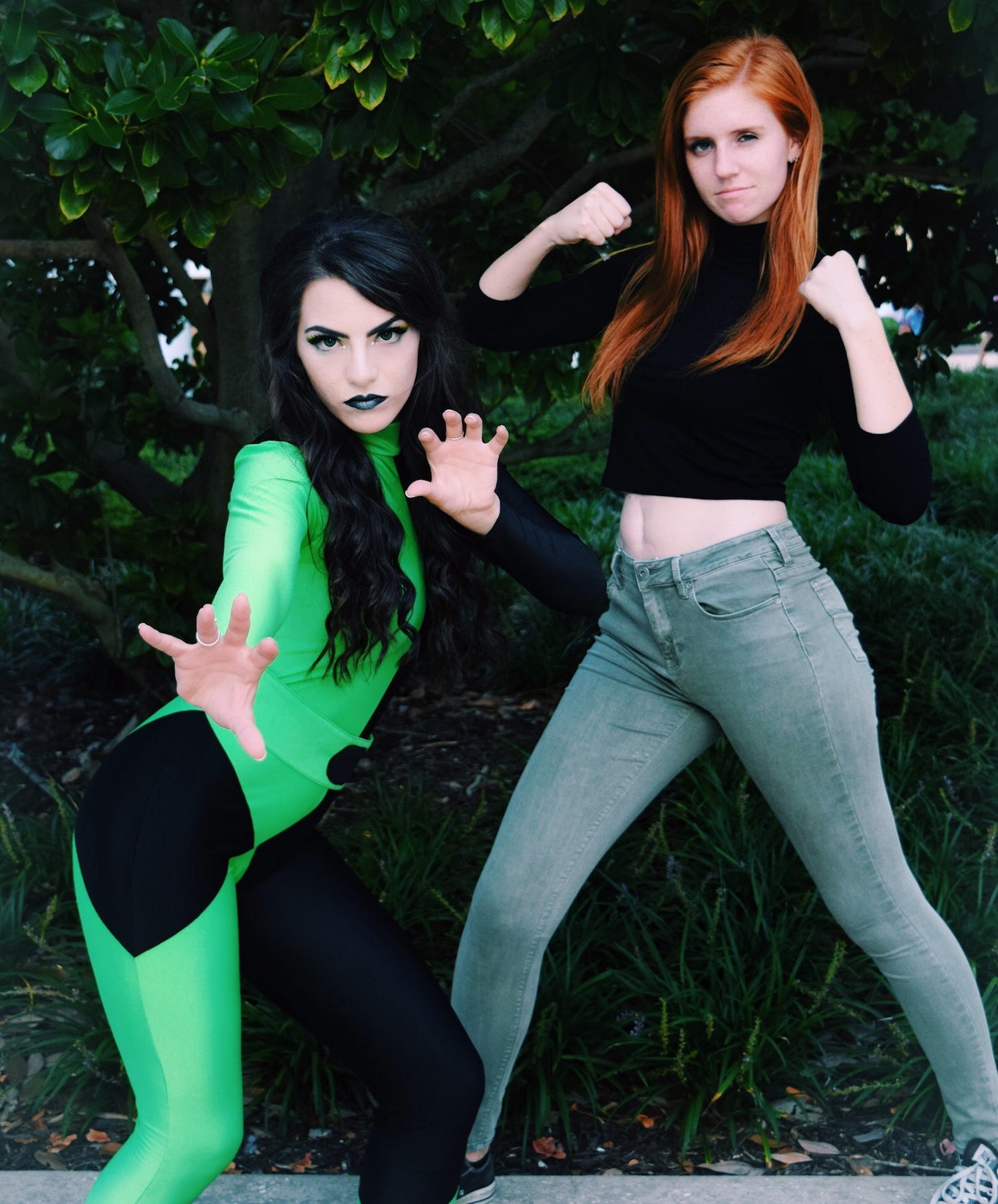 Jessica FayeShego’s suit is available for purchase online from a variety of retailers.

A live-action “Kim Possible” movie was released in 2019, so Halloween is the perfect time to dress as your favourite characters from the show.

Jessica Faye and Krista Holtzman created these costumes of Kim Possible and Shego, which can be easily re-created using clothes you might already have at home.

Rather than dressing in Mrs. Incredible’s signature suit, dress as her earlier alter ego, Elastigirl. 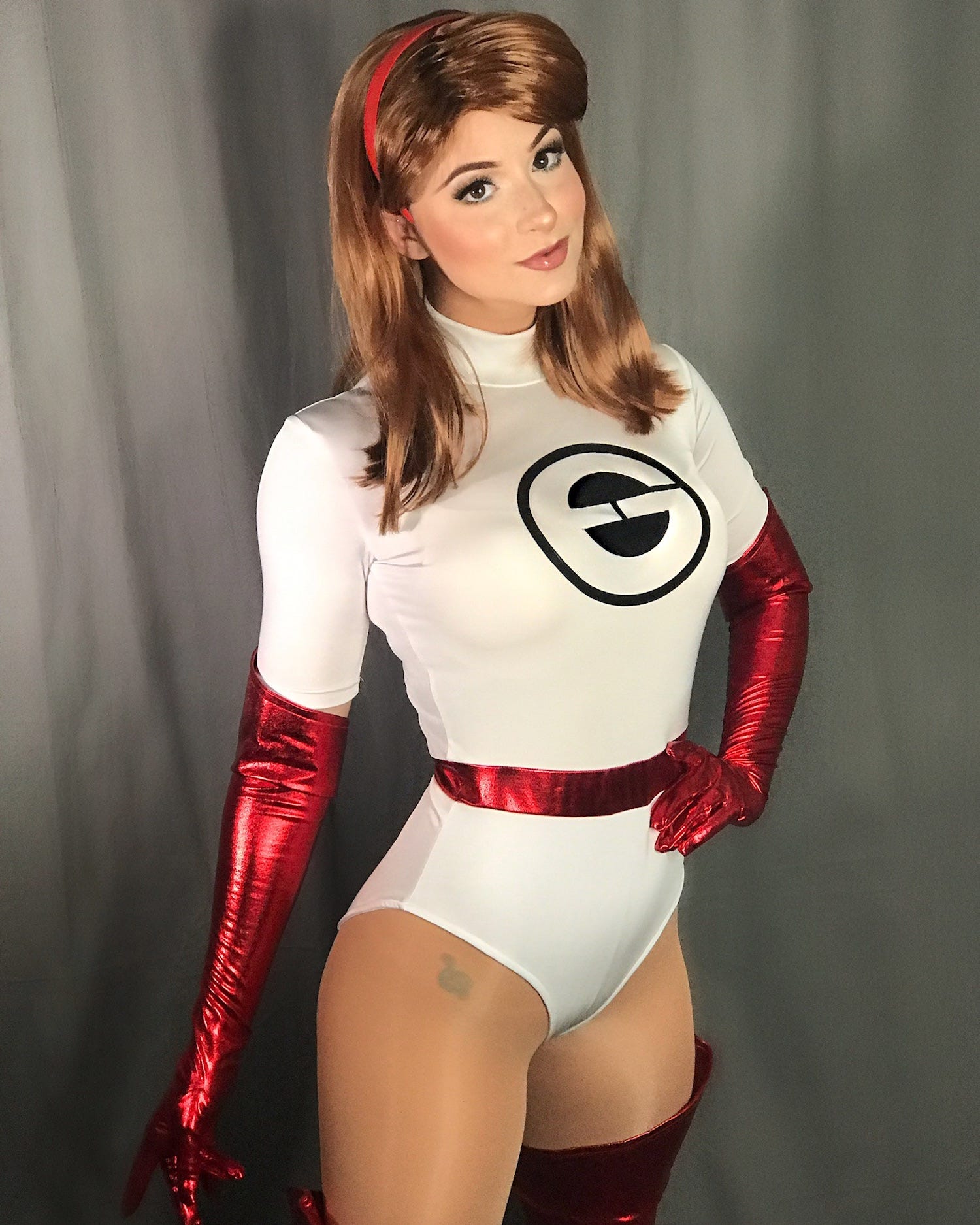 Erin HausYou can wear understated makeup with this costume.

Superhero suits from “The Incredibles” are always popular costumes, but you can put your own twist on the hype by wearing the Parr family’s earlier outfits.

Using a white leotard, red gloves, and red boots, you’ll have no problem making a DIY version of this Elastigirl look created by cosplayer Erin Haus of HausPlay.

Put a unique spin on a traditional Ursula costume by dressing as her human persona Vanessa. 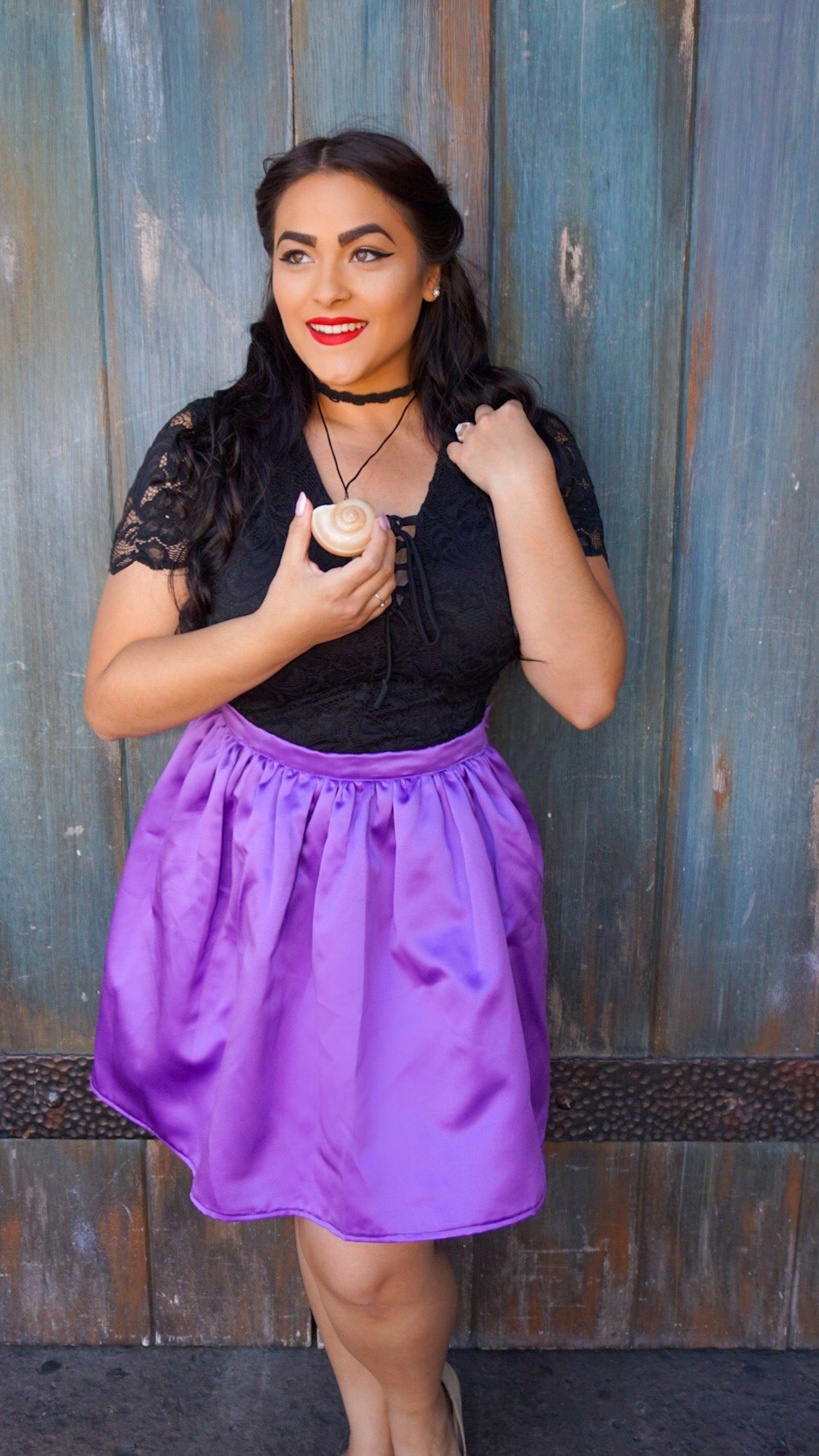 Made By Magic DesignsYou can wear simple makeup for this costume, but don’t forget a bold red lip.

Stephanie Danet, a cosplayer and owner of the Made By Magic Designs shop, turned a simple outfit into a costume inspired by “The Little Mermaid” character Vanessa, the human Ursula turns into while trying to impress Prince Eric.

To re-create this look, pair a shiny purple skirt with a black lace blouse. Pull some of your hair back to create Vanessa’s signature waves, and accessorize with a seashell necklace to replicate the one that held Ariel’s voice.

Jane from “Tarzan” is rarely seen on Halloween. 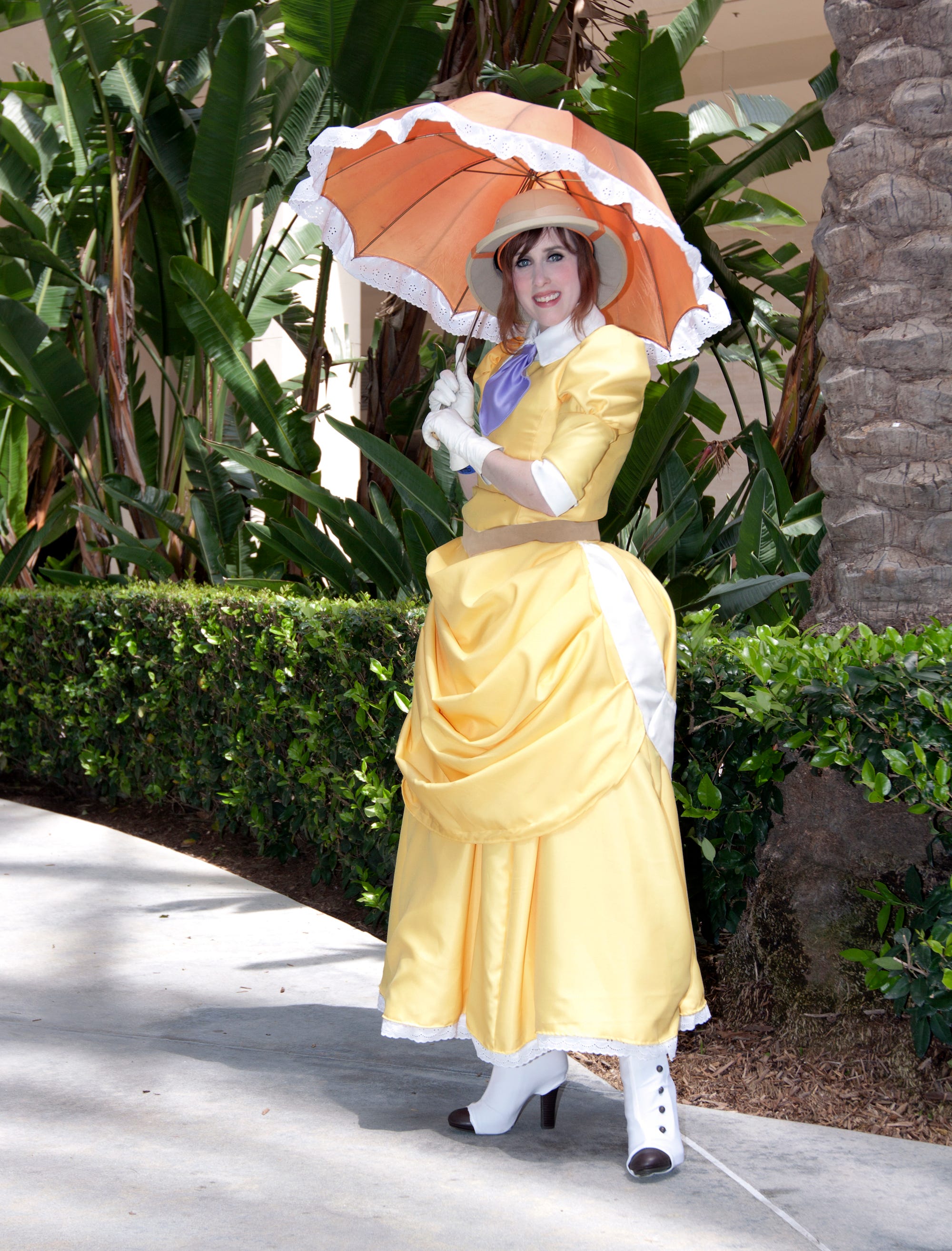 KelldarJane costumes aren’t nearly as popular as those of Disney princesses.

You’ll need a decent amount of time to create a Jane from “Tarzan” costume, but it’s worth making to stand out from the crowd.

Disney enthusiast and costumer Kell created a spot-on Jane costume, which you can re-create at home with a yellow dress, purple tie, heeled boots, and an umbrella.

Try dressing as a character from Disney Channel, like Zenon. 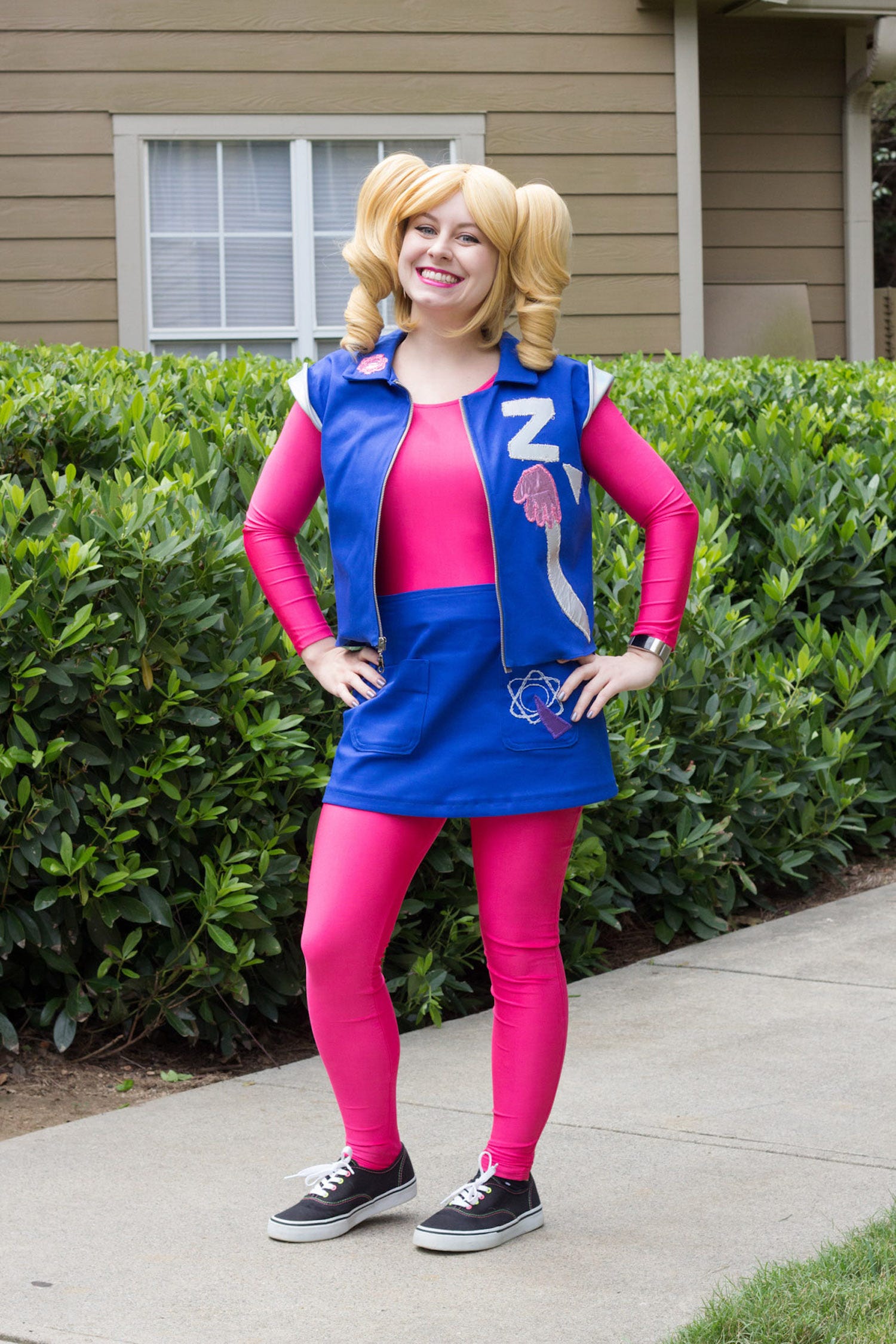 Jamie RoseThere are three ‘Zenon’ films, so you’ll have a wide range of outfits to choose from.

Blogger Jamie Rose of Petite Panoply created this look from “Zenon: Girl of the 21st Century,” and it makes for a perfect Halloween costume.

Not only does this costume give you the opportunity to sing “Supernova Girl” all day, but also, you probably won’t need to buy a ton of new clothes to make it.

Roger and Anita from “101 Dalmatians” make for an underrated couples costume. Kate HamernikThese costumes can also be made using clothes that you already own.

You probably think about dogs when you hear “101 Dalmatians,” but the film could not exist without its human characters, Roger and Anita Radcliffe.

Highlights Along the Way blogger Kate Hamernik made a spot-on re-creation of one of their looks, which is a good option for couples who don’t want to dress as traditional princes and princesses.

You can show your love for Disney theme parks with a costume inspired by a ride. 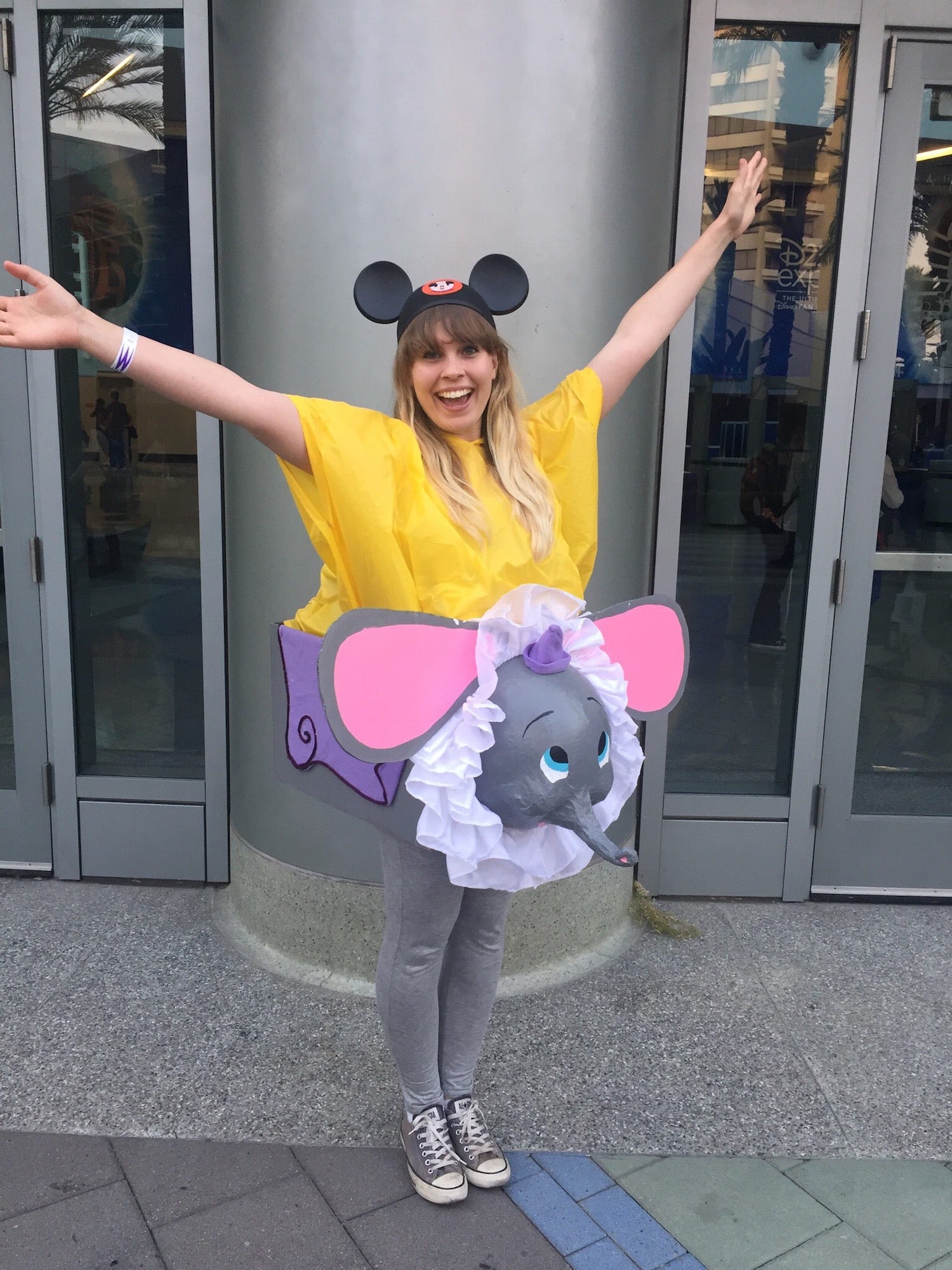 “Dumbo the Flying Elephant” was one of the first rides introduced to Disneyland in 1955, and it’s still a fan favourite today.

If you’re looking for a unique costume that will still make sense to even the most casual Disney fans, take inspiration from this ride-inspired outfit, created by cosplayer Emelia Aukee and her friend Alicia Luoma.

You can dress as Ariel from “The Little Mermaid” without wearing a tail and seashell bra. 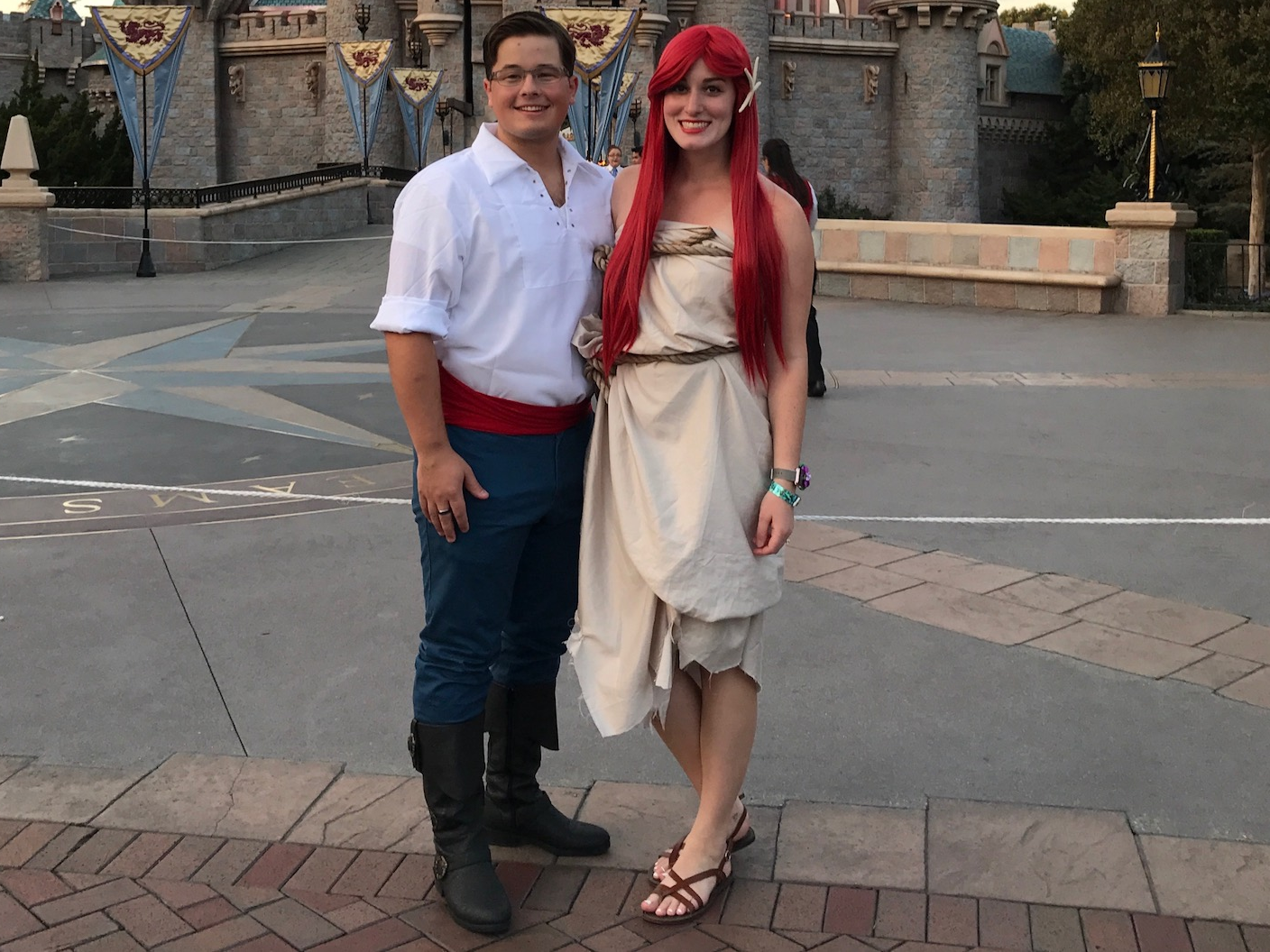 Ariel wears seven different outfits throughout “The Little Mermaid,” but her classic fins and seashell bra remain the most common Halloween costume inspired by the movie.

Disney enthusiast Kaitlyn Hawkins took a different approach, and instead re-created the dress that Ariel makes using a boat sail when she first washes ashore. The costume is easy enough to DIY, and will be one of the most unique princess costumes wherever you celebrate Halloween.

You can find underrated costume inspiration in Disney’s “The Princess Diaries.” 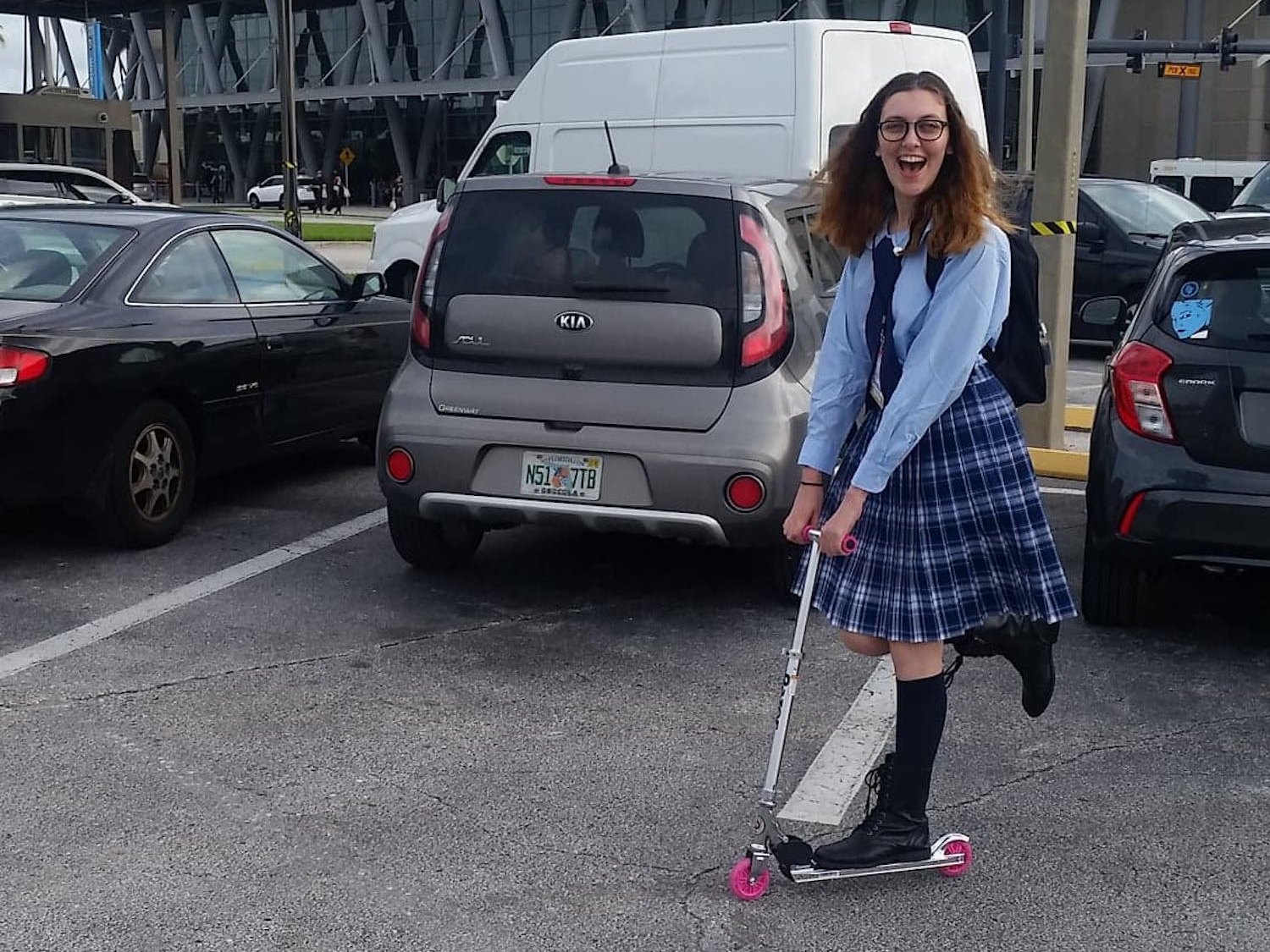 DixieAny blue school uniform will work for this costume.

Though Disney is known for its group of elegant princesses, there are some unconventional ones in the mix, like Princess Mia Thermopolis of “The Princess Diaries.”

Those in a group might want to consider dressing as characters from “Big Hero 6.” 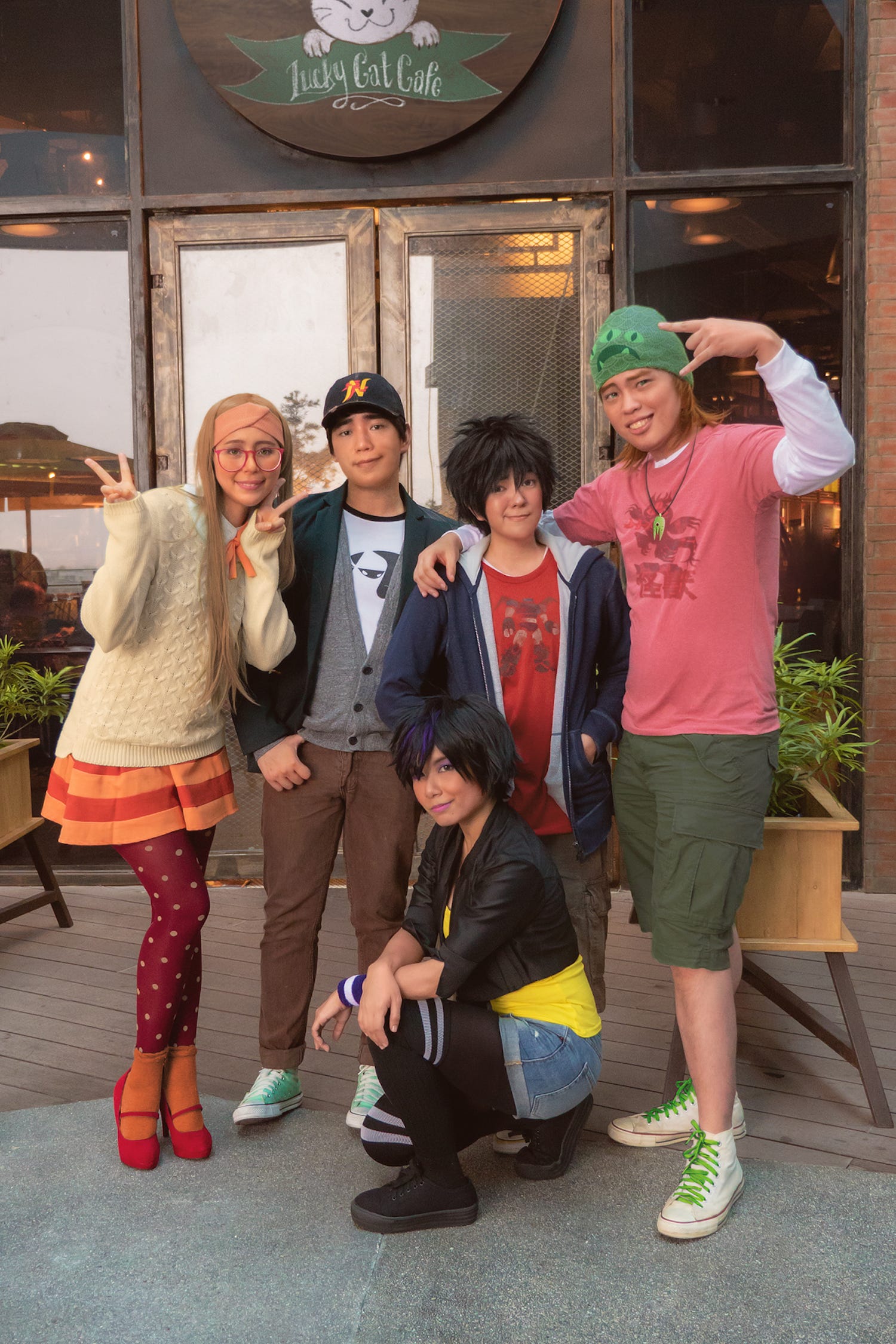 Costumer Jin and his friends created this “Big Hero 6” group costume in 2015.

For the most dedicated fans of the 2014 film, there are technically two different ways in which you can do the same: You can wear the everyday clothes of Hiro and friends, or you can opt for their battle armour.

This Hades costume adds some glitz to the villainous “Hercules” character. 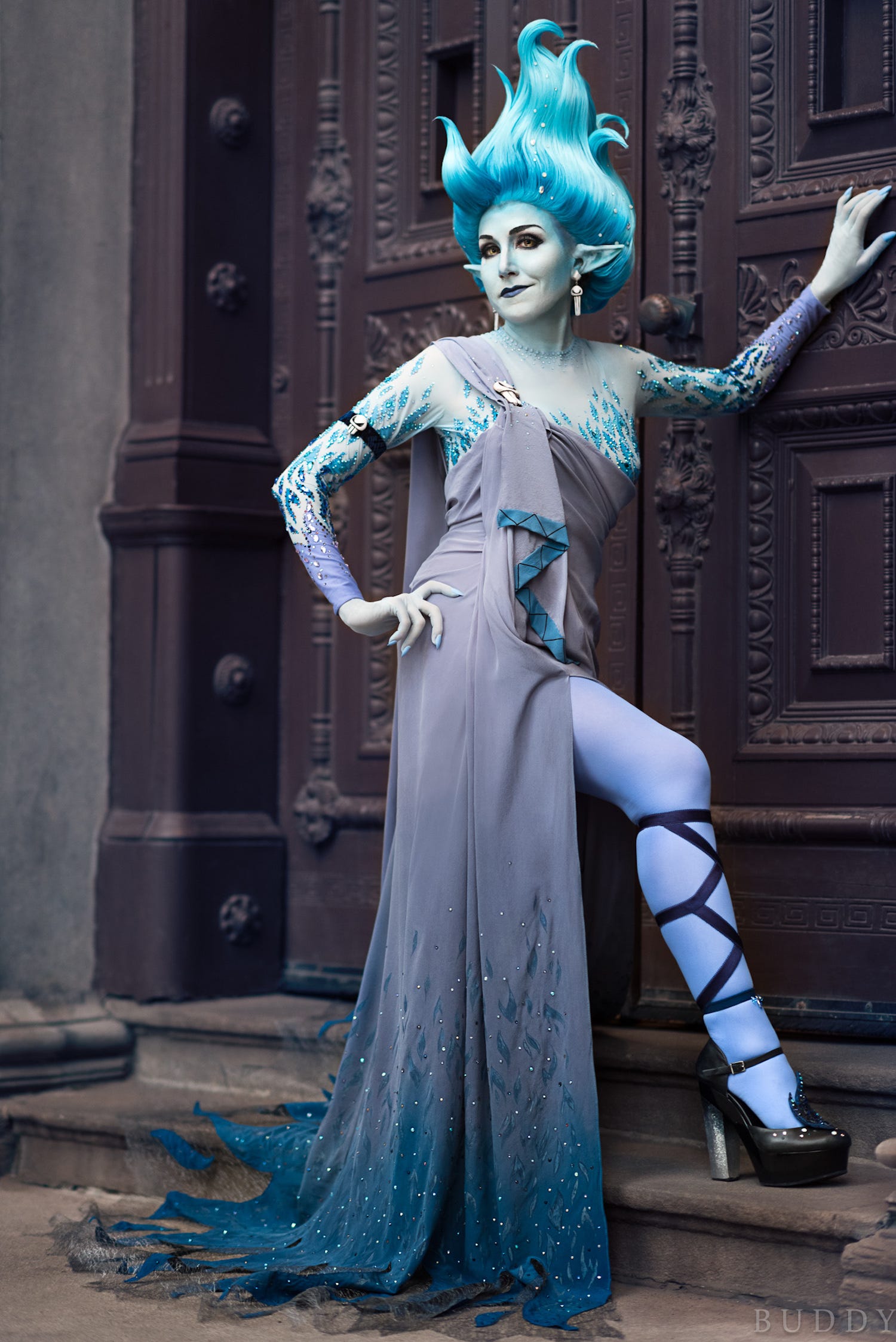 Buddy PhotographyHalloween costumes can be customised any way you’d like, as with this Hades costume.

Costumer Sarcasm-himé put a glam twist on “Hercules” antagonist Hades, and the same can be done for any Disney villain or hero.

However, it should be noted that this costume is a bit advanced and would probably require a decent amount of preparation. But if you’d really like to stand out on Halloween, the extra effort will certainly help you do it. 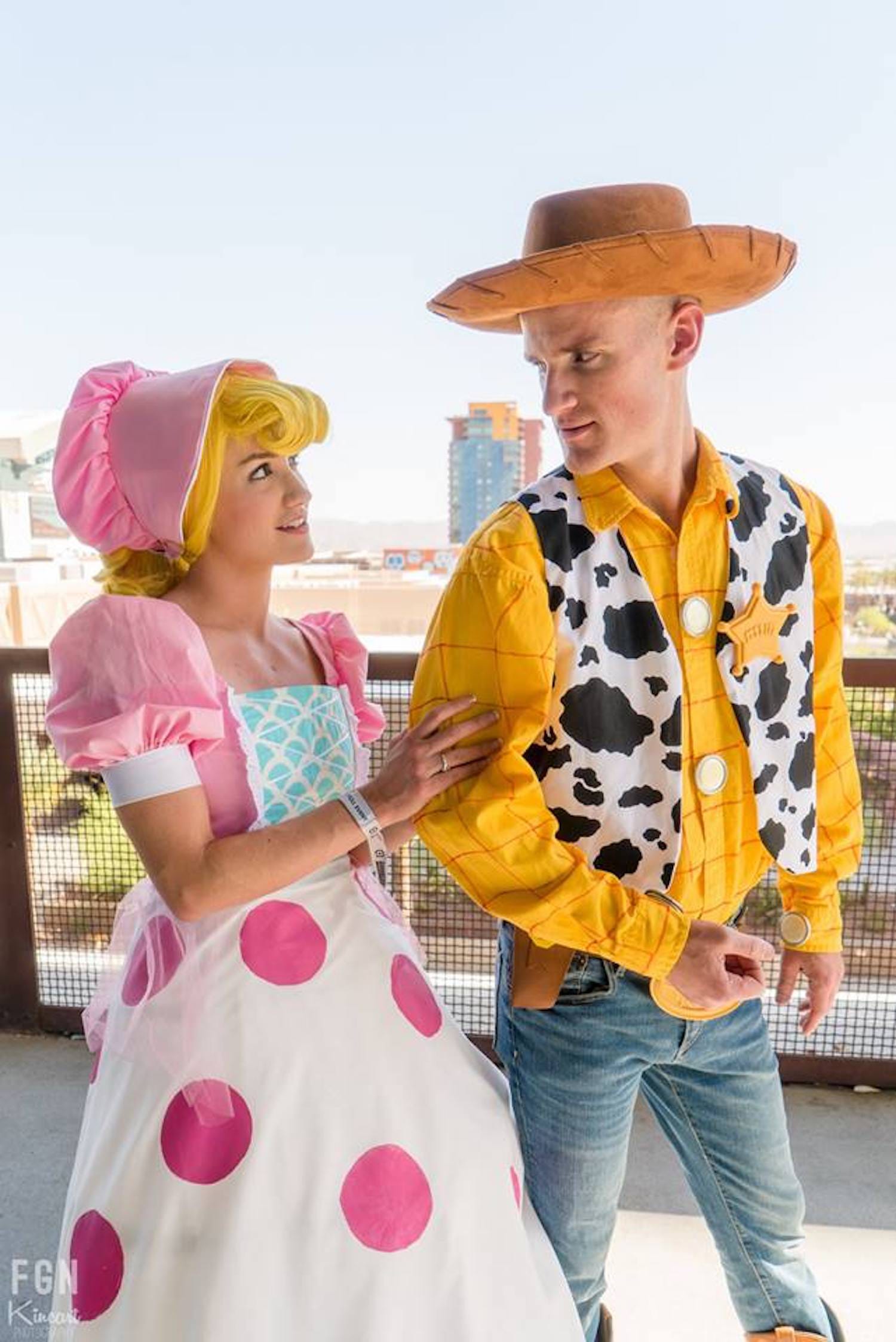 Kincart PhotographyA Little Bo Peep costume is made even better when a friend or partner dresses up as Woody.

“Toy Story” was released over 20 years ago in 1995, but the franchise still has a pretty dedicated fan base. If you’d like to dress as one of the film’s less popular faces, opt for a character like Little Bo Peep.

You’ll have to get a little creative to re-create the exact look made by Poison Bella Cosplay and her fiancé, but a full white skirt, baby-pink shirt, and blue shepherd’s cane will do the trick.

You don’t have to be part of a group or duo to dress as Sally from “The Nightmare Before Christmas.” 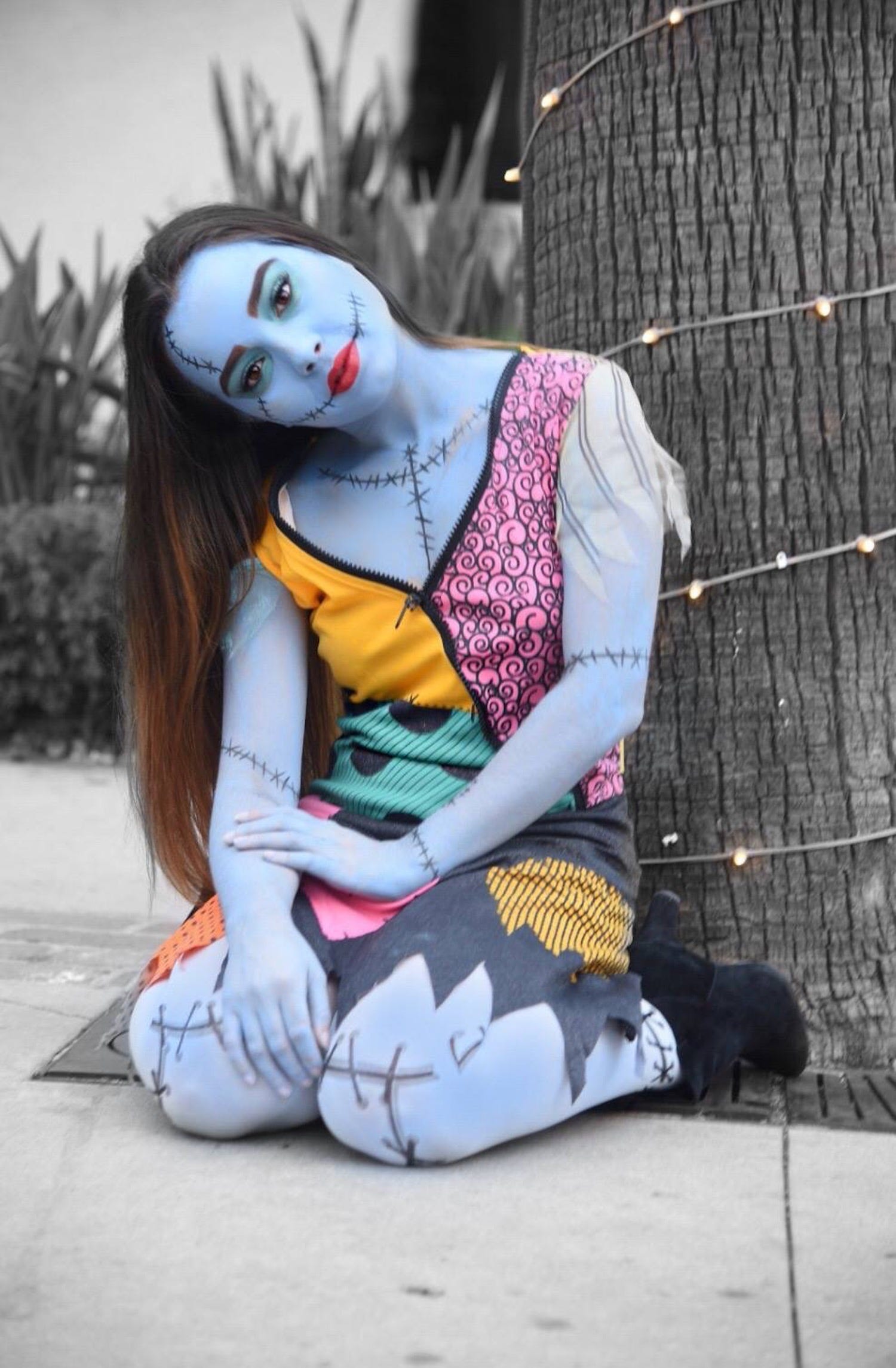 Jasmine LiraaYou’ll also need a decent amount of makeup to complete this costume.

One of the most important parts of creating a costume from “The Nightmare Before Christmas” is pairing periwinkle makeup with painted-on stitches.

Vlogger Jasmine Liraa captured both of these elements perfectly with her costume and tied her whole look together with Sally’s signature dress.

Beret Girl is one of the most underrated characters from “A Goofy Movie.” 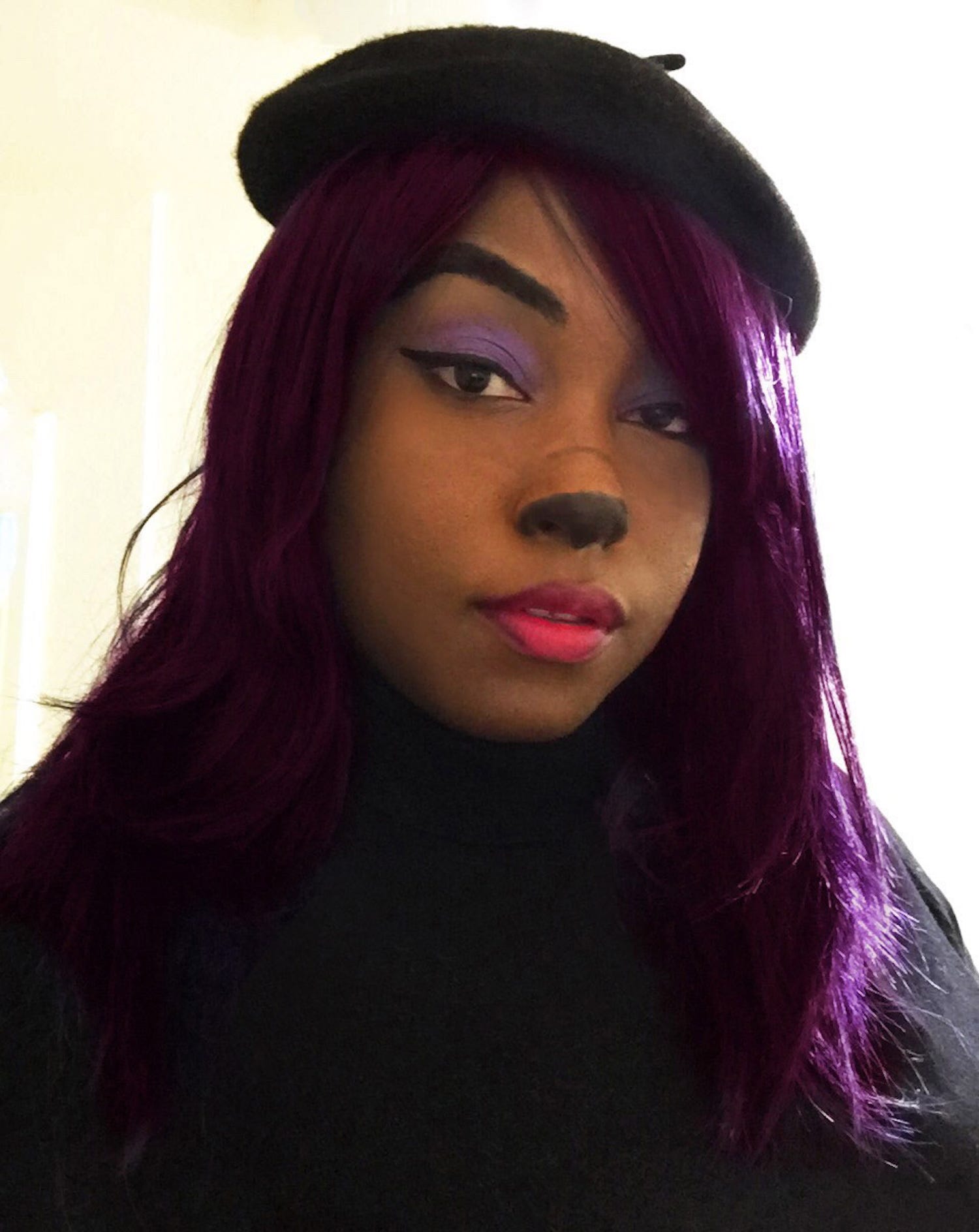 Kendra DavisCarrying a microphone is optional, as Beret Girl is a spoken-word poet in the movie.

There are tons of costumes that you can create using a simple pair of black leggings, and Beret Girl from “A Goofy Movie” is one of them. Just add a magenta wig, black beret, and plain turtleneck, and you’re all set.

Stacey is another underrated character from “A Goofy Movie” that you can dress as for Halloween. 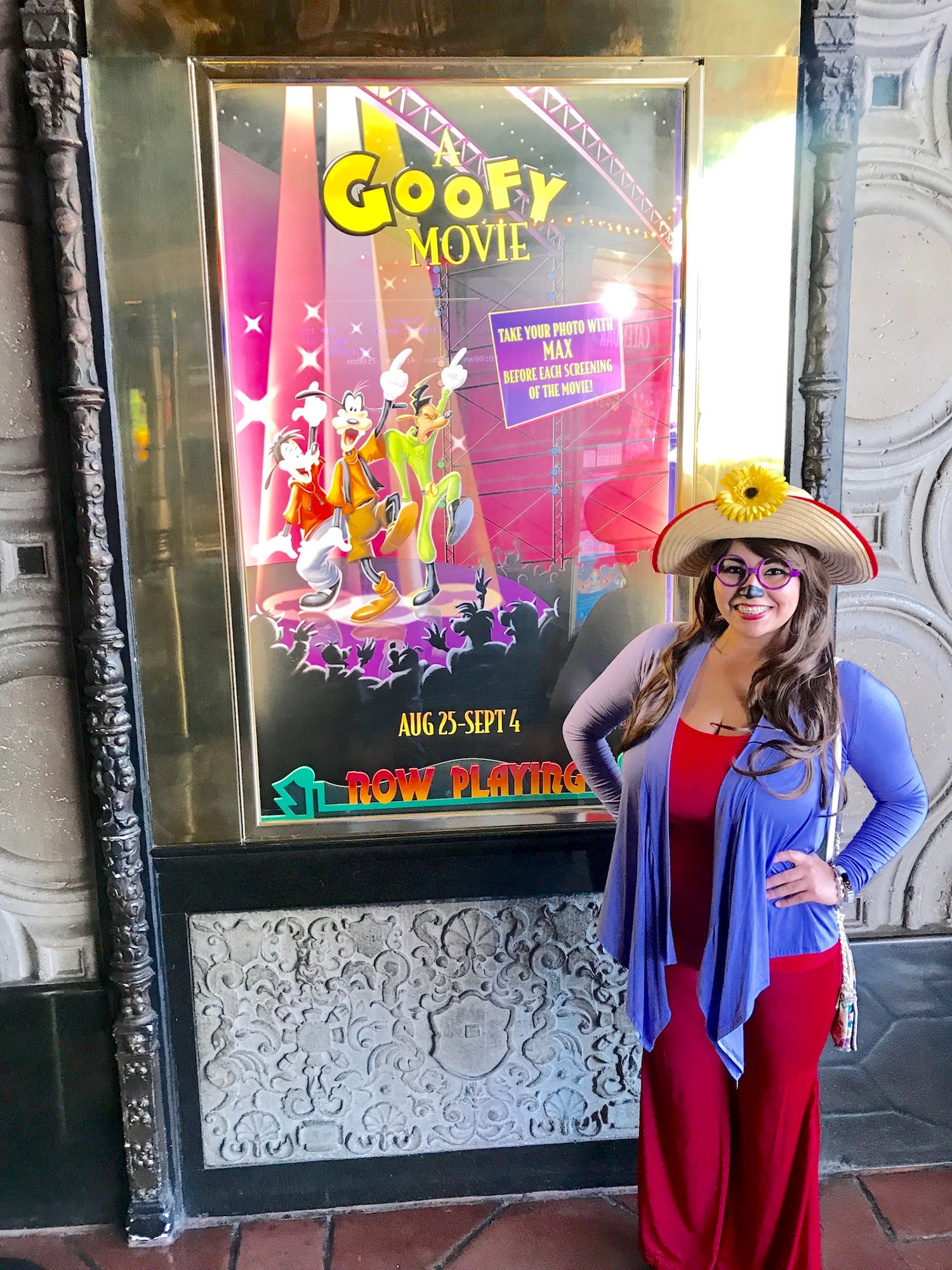 Ana BaronYou can probably create this costume with clothes you already own.

As Roxanne’s best friend in “A Goofy Movie,” Stacey might not get as much attention as other characters. Still, she makes for a great Halloween costume. To get her look, pair a red tank top with matching pants and a lavender cardigan. For accessories, all you’ll need is some purple glasses and a DIY sunflower hat.

For some extra inspiration, take a look at costumer Ana Baron‘s re-creation of the underrated character. 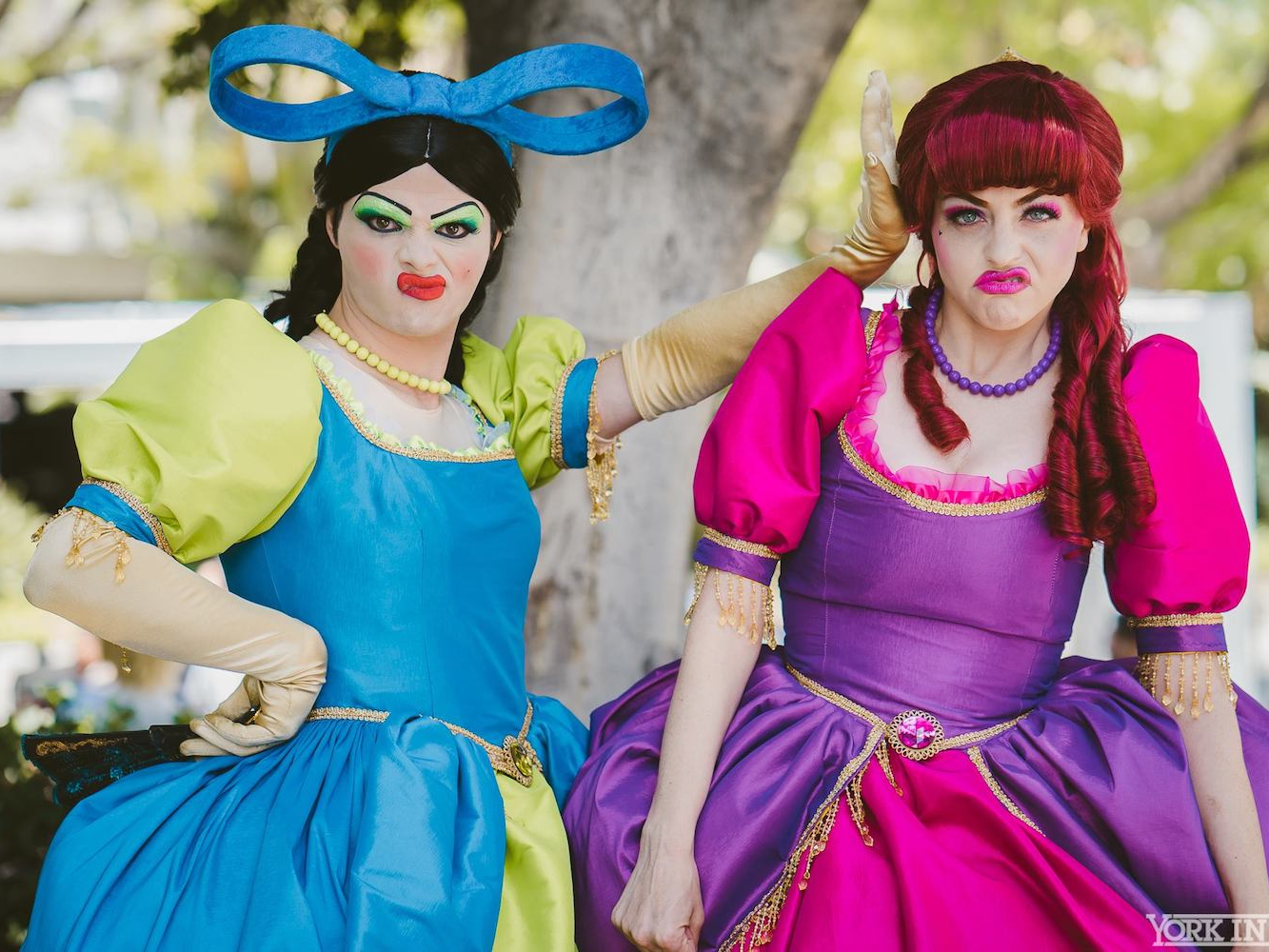 If you want to wear a ball gown on Halloween but don’t want to dress as a Disney princess, try dressing as Cinderella’s stepsisters, Anastasia and Drizella.

This detailed look was created by Disney enthusiasts Joanna Lynn and Allen Waiserman, but you can create a DIY version at home with simple blue and purple dresses.

There are five muses in “Hercules,” but you can go solo as one for Halloween. 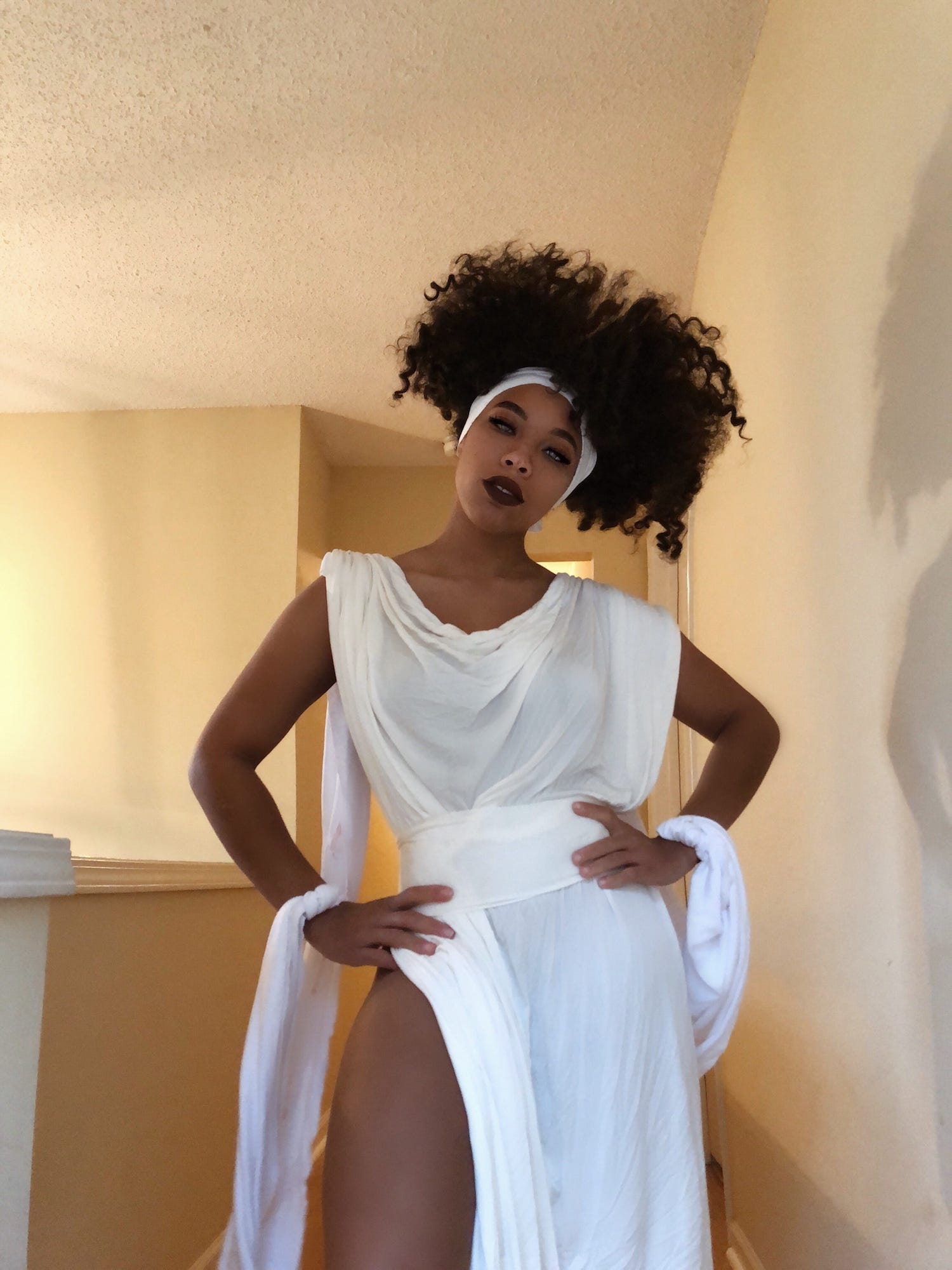 Kiera PleaseA ‘Hercules’ costume is easy to recreate with a Grecian-style toga dress.

On Halloween, try making a DIY costume of whichever muse you prefer, which can be worn alone or as part of a “Hercules”-inspired group costume.

There are tons of characters from “Holes” to dress up as on Halloween. 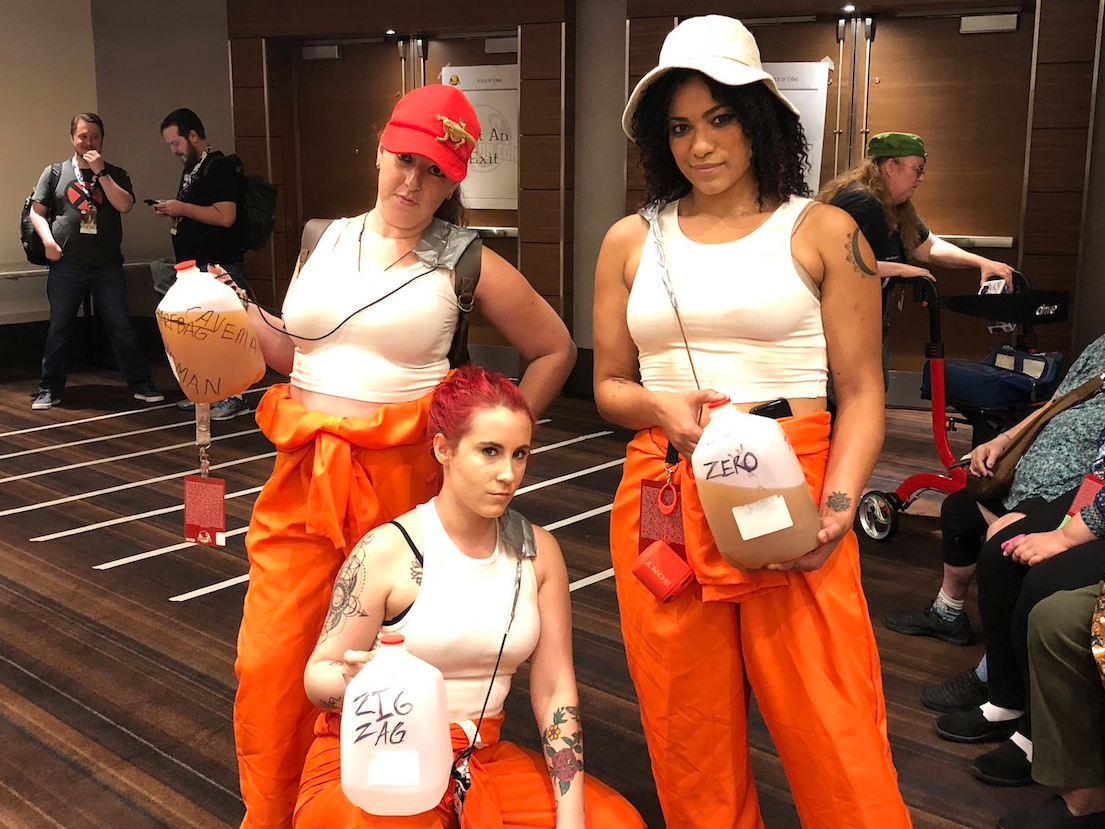 Samantha KaneDon’t forget to add some fake lizards to replicate the ones from the movie.

For Halloween, follow in the footsteps of cosplayer Samantha Kane and her friends by dressing as Stanley, Zero, Zigzag, or any other characters from the fan-favourite franchise.

Those who frequent Disney theme parks will love this “Haunted Mansion”-inspired costume. 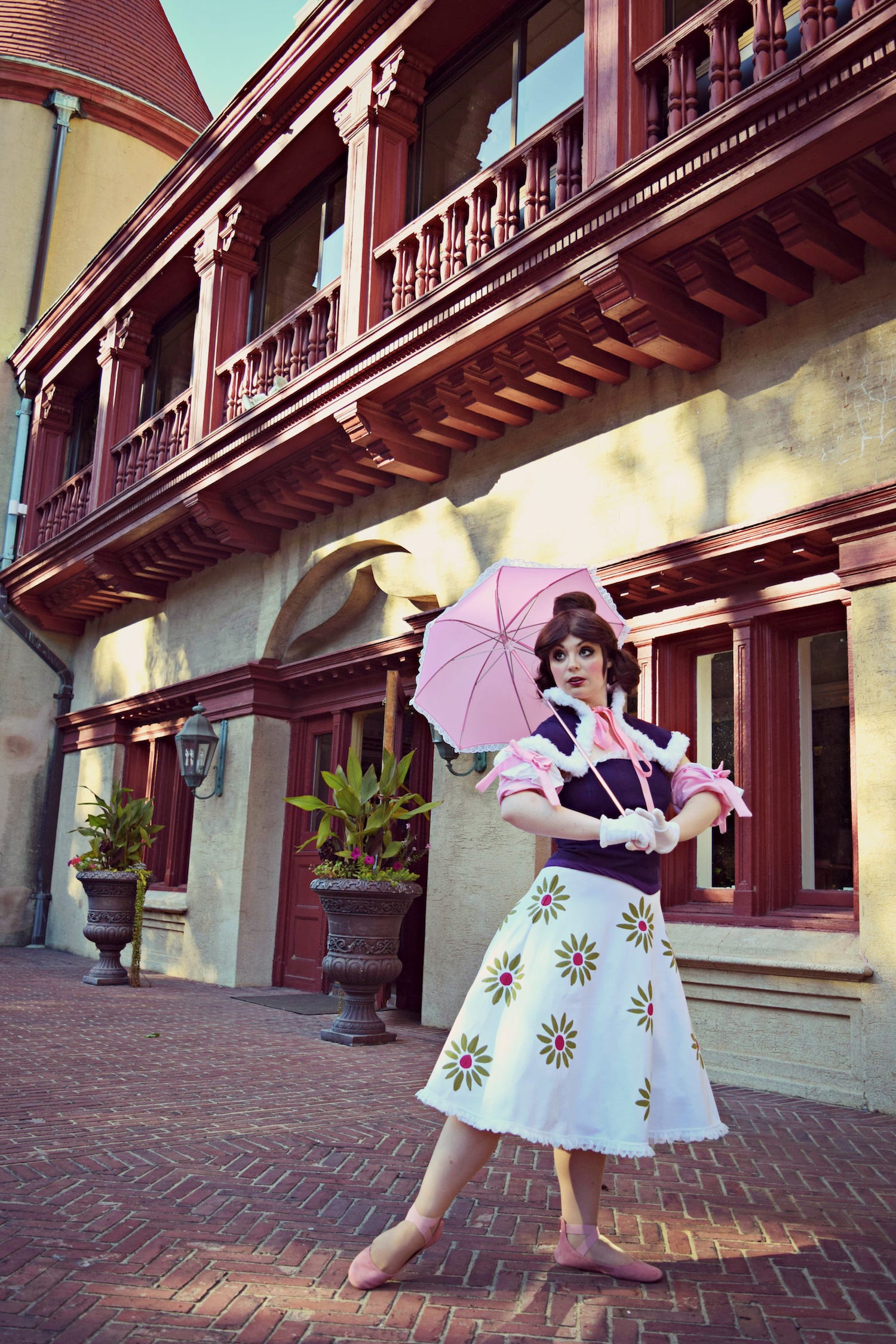 You might think that “The Nightmare Before Christmas” is Disney’s only connection to Halloween, but don’t forget about the “Haunted Mansion” ride that exists in three different Disney Parks.

Cosplayer Fairwind Cosplay re-created the look of the Tightrope Walker, who can be seen walking above a crocodile pond early in the ride.To wear this on Halloween, you can either make a DIY version or buy a replica directly from Disney.

Despite being one of Disney’s most famous films, “Pinocchio” rarely inspires Halloween costumes. 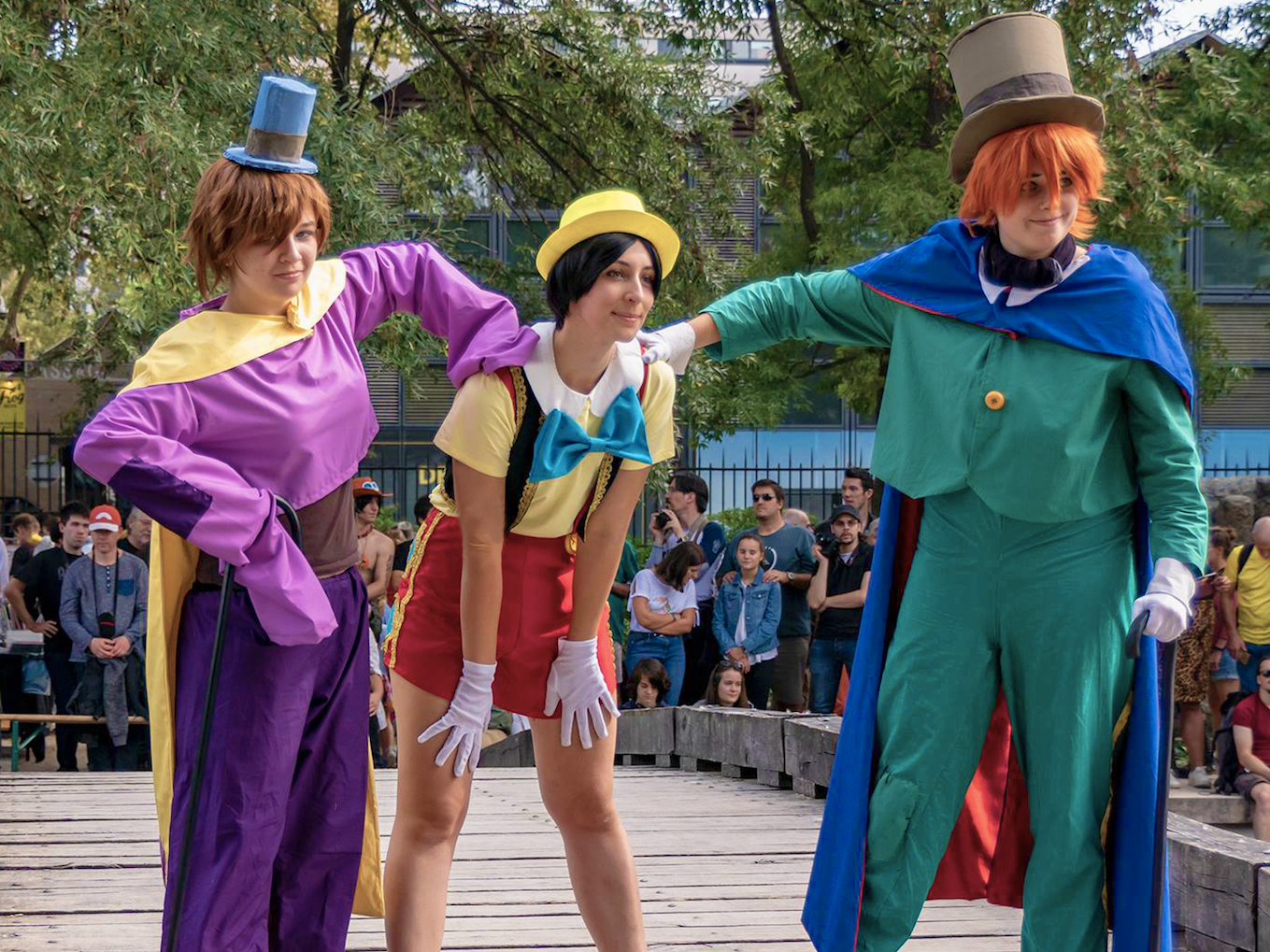 DreamCosModGideon is on the left, Pinocchio is in the middle, and Honest John is on the right.

Pinocchio may be one of Disney’s most critically acclaimed films, but besides the film’s namesake, you’ll rarely see characters from the movie on Halloween.

While characters like Honest John and Gideon are a bit creepier than most Disney characters – they con Pinocchio in attempts to sell him to a puppeteer – cosplayers Fearynna,Camy, and Lea created a group costume that would be a good idea at a Halloween family function.

“Atlantis: The Lost Empire” was released in 2001, so you won’t have to worry about other people copying your costume. 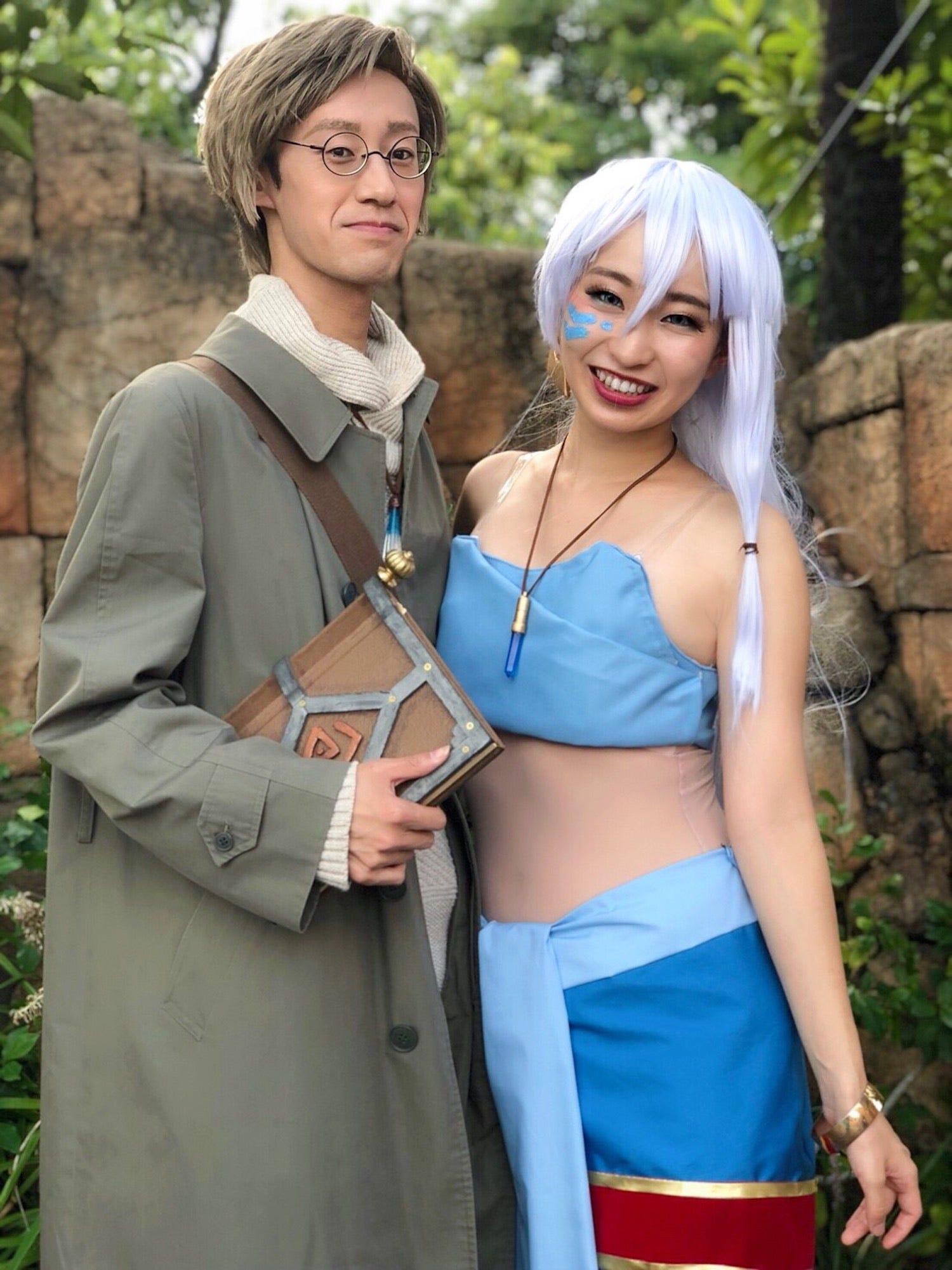 Moe DreamingAccessories like Milo’s journal and Kida’s necklace are key to perfecting this costume.

“Atlantis: The Lost Empire” was one of Disney’s least successful ventures, but fans still love the 2002 film – it even has Cole Sprouse’s seal of approval.

Cosplayer Moe Dreaming reimagined the leading characters, Milo and Kida, almost exactly, and you can do the same with the help of some simple sewing skills. Milo’s outfit can be re-created with any thrifted trench coat and white turtleneck, but to match Kida’s look, you’ll need to sew blue fabric into a crop top and then use the rest to make a skirt.

Only true Disney fans will dress as Captain Amelia from “Treasure Planet” on Halloween. 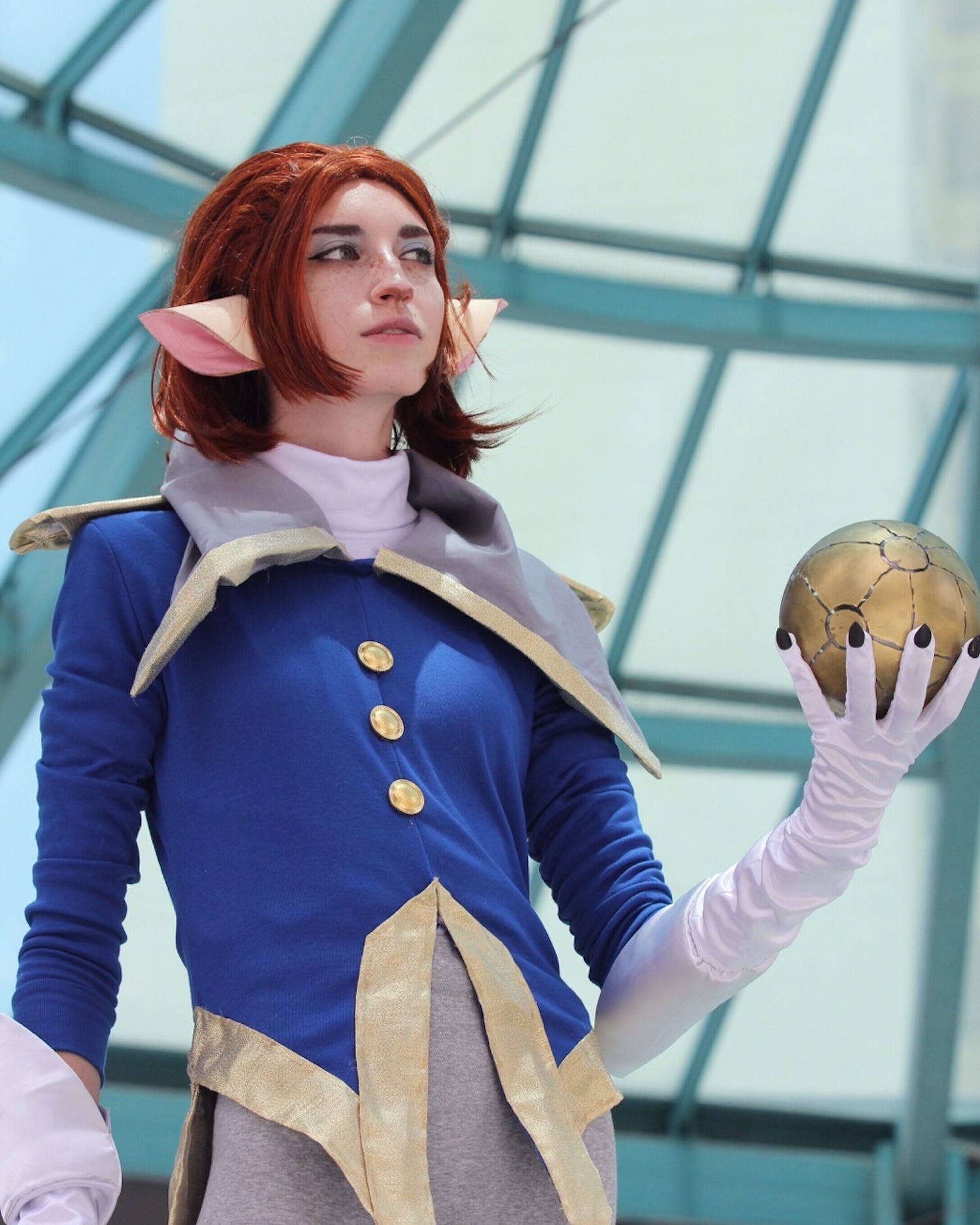 “Treasure Planet” was a financial flop for Disney, but the film still holds a special place in the hearts of fans – some of whom even made a Reddit thread in honour of the movie.

Cosplayer Taylor Griffin created a Halloween costume inspired by Captain Amelia, but any character from the film will work just as well.