In the brand-new “Uncharted: The Lost Legacy,” the series’ formula is finally getting mixed up — instead of the same old Drake, two new female protagonists are taking the lead. Rather than attempting a sequel to the notably conclusive “Uncharted 4: A Thief’s End,” the story of “The Lost Legacy” is a spin-off set in the wake of the last game. But don’t get things twisted: This is definitely an “Uncharted” game still, from third-person shooting to swinging on vines to exotic locales.

Better yet: “Uncharted: The Lost Legacy” arrives this coming Tuesday, August 22, on the PlayStation 4. As such, we’ve put together everything we know about the game ahead of launch.

This is Chloe Frazer, one of the two protagonists in 'Uncharted: The Lost Legacy.' She's who you'll actually play as, while your compatriot assists (like Sculley in previous games). This is Nadine Ross, a mercenary with ties to the game's antagonist (who we'll meet in a moment). The relationship between Chloe and Nadine isn't exactly positive, which is one of the central tensions in the story of 'The Lost Legacy.' This bespectacled gentleman is known only as Asav. He's a rebel leader, and he's got a past with Nadine -- he's also the bad guy. In a Game Informer piece from March, the game's creative director Shaun Escayg said Asav 'has history with the government; he feels left out in solving the conflicts the government solved at one point and he's now a lone rebel trying to create war and profit from it.'

Where 'Uncharted 4' was a romp around Madagascar, 'The Lost Legacy' is set in India -- specifically, a mountain range known as the Western Ghats. The Western Ghats is a UNESCO World Heritage site, known for its beauty and biodiversity. To that end, expect lots of outrageously gorgeous vistas -- not exactly a huge surprise to any 'Uncharted' fans.

It's not exactly clear why Nadine and Chloe are teaming up for adventure, but we do know what they're after: an artifact called the 'Tusk of Ganesh.' Naughty Dog/Sony
And who has that artifact? Yes, of course Asav has it. That's how this works, right?

'The Lost Legacy' features the same type of gameplay that millions of fans love. Expect climbing puzzles, third-person gunfights, and miraculous leaps that should kill any normal person. You can also expect lots of cinematic moments with thoughtful dialogue, especially as Nadine and Chloe work out their mixed feelings for each other. Giant areas like this are impressive to look at, but some of the best 'Uncharted' gameplay comes from navigating these scenarios. Are you going to run in guns blazing? Or perhaps you're going to pick off bad guys from the shadows with the newly silenced pistol? It's open areas like this where 'Uncharted' shines, and 'The Lost Legacy' continues that tradition. Are you more of a sneak? A tactician? A passivist? An aggressor? The choice is yours.

Like 'Uncharted 4,' a sneaking system returns in 'The Lost Legacy' -- a new pistol with a silencer adds to your stealth toolkit. On the flip side, you're more than welcome to take cover and take fire. Or, if you prefer, you could simply distract enemies and sneak past them.

It also looks like there will be more to sneaking than hiding in shadows: Here you can see Chloe in a shop trying on different outfits. In the game's introductory trailer, Chloe is seen sneaking around a city. She uses a veil to hide her face. On the journey to capture the Tusk of Ganesh, Chloe and Nadine will traverse the largest environment yet in an 'Uncharted' game. Geographically-speaking, the game's environment is described as similar to the last game in the series: a mix of mud and plains and rocky terrain.

'We have this really great location of these rural Western Ghats,' game director Kurt Margenau told Game Informer in March. 'That allows us to get a real, true sense of exploration kind of unlike anything we've done before -- where the level design isn't directing you exactly where to go, and you're free to explore, find things, and discover things.'

The 'Uncharted' series is known for its ability to showcase the graphical prowess of PlayStation consoles. In the case of 'The Lost Legacy,' the game is optimised for 4K and HDR support on Sony's PlayStation 4 Pro console. You may've already noticed that some of these images feature a note in the lower right corner about being captured on a PlayStation 4 Pro console. What that means is the game's images were captured in 4K -- a resolution beyond that of standard high-definition -- with HDR lighting effects (which offers a greater depth of lighting).

All of which is to say one thing: 'Uncharted: The Lost Legacy' is going to look extra pretty if you have a PlayStation 4 Pro and a 4K television with HDR support. The game will also look great on a standard PS4 with a run-of-the-mill HD television, of course.

Given the nature of the 'Uncharted' series, expect a mix of third-person action with the quieter moments of puzzle solving or exposition. And the occasional leap of faith, of course. Though you'll only play as Chloe, Nadine is right there fighting alongside you. If you choose to go in spraying bullets, she's right there with you pistol-whipping fools. 'Uncharted: The Lost Legacy' is a PlayStation 4 exclusive, and it's available on August 22 for $40. Check out the latest trailer below! 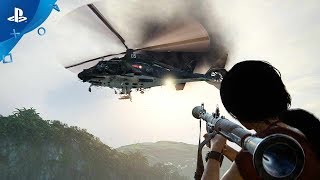 You don't need 'Uncharted 4: A Thief's End' to play 'The Lost Legacy' -- you can buy the game as a physical release, or buy it digitally, right here.