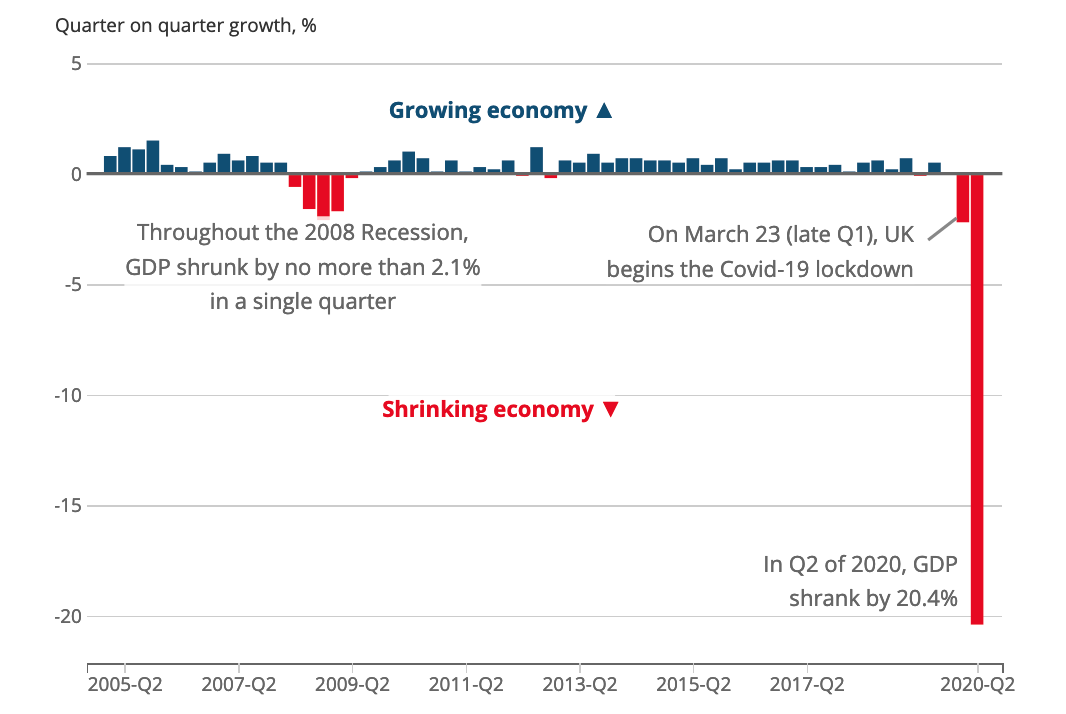 The UK is in an official recession, the country’s statistics authority confirmed Wednesday.

Gross domestic product – widely used to measure the size of a country’s economy – fell by 20.4% in the second quarter, the biggest fall on record, according to figures from the Office for National Statistics.

The fall marks the second consecutive quarter of retraction, meeting the technical definition of a recession.

It is a stark sign of the economic ruin caused the coronavirus pandemic and the lockdown measures used to combat it.

“I’ve said before that hard times were ahead, and today’s figures confirm that hard times are here,” Rishi Sunak, the UK’s chancellor of the Exchequer, said. “Hundreds of thousands of people have already lost their jobs, and sadly in the coming months many more will.

“But while there are difficult choices to be made ahead, we will get through this, and I can assure people that nobody will be left without hope or opportunity.”

UK GDP began to contract sharply in late March, when COVID-19 was found to be spreading rapidly in the population, and the government imposed sweeping lockdown measures in response.

Though most of the impact was not registered in the first-quarter figures given the timing, GDP in that quarter still fell by 2.2%, setting the stage for the much sharper fall in the second quarter.

Statistics released July 31 from the eurozone – which includes economies like France, Spain, and Italy – showed that the bloc was also in an official recession, reporting a 12.1% fall in its second-quarter GDP.

The US economy too is in recession and has been since February, according to the private organisation viewed as the authority on the subject.

That organisation, the National Bureau of Economic Research, made the declaration in early June. It does not use the two-consecutive-quarters definition for recession and instead counts anything considered to be a “significant decline” in economic output.