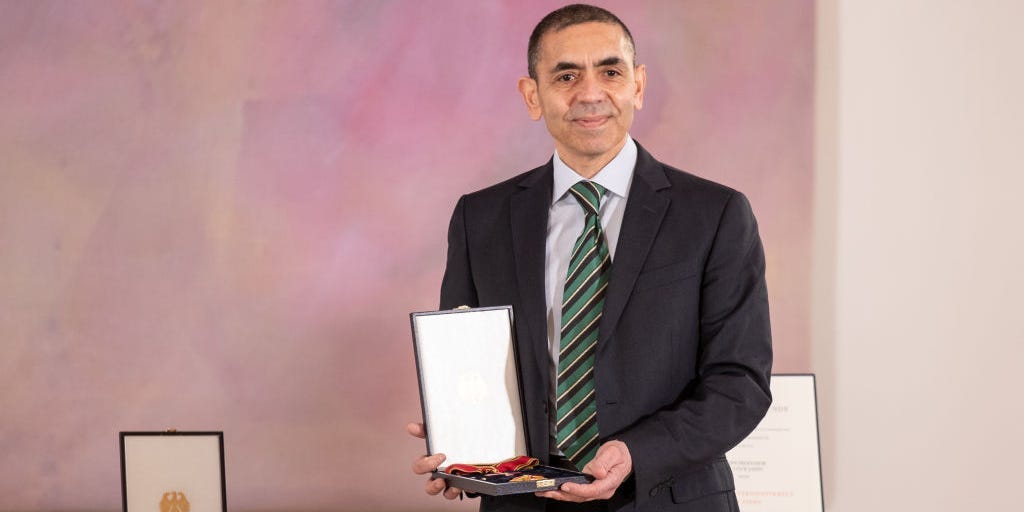 Andreas Gora – Pool/Getty ImagesUgur Sahin, co-founder of BioNTech, receives the Federal Order of Merit for contributing to the containment of the pandemic on March 19, 2021 in Berlin.
Ugur Sahin, the CEO and co-founder of German pharma group BioNTech, is one of two scientists whose efforts helped develop the first coronavirus vaccine authorized in the US.

Sahin and his wife, Ozlem Tureci, are the “dream team” couple whose company partnered with Pfizer to develop and supply three billion vaccine doses worldwide by the end of 2021.

The race among pharmaceutical companies to create and distribute their vaccine candidates was intense last year, with many seeing their stocks impacted by developments in clinical trials. Company insiders rushed to sell their shares, aiming to make profits off of their booming stocks.

Notably, Pfizer CEO Albert Bourla cashed out 60% of his stock the day the company disclosed that its vaccine was more than 90% effective in preventing severe cases of COVID-19.

But Sahin hasn’t sold a single share in BioNTech since February 13, 2020, according to a recent Forbes report.

Sahin, the son of Turkish immigrants who moved to Germany in the late 1960s, is among the richest people in Germany. But his family lives in a modest apartment near his office and doesn’t own a car. His lifestyle is said to reflect a simple approach to life, and he’s known for cycling to the office. His company is currently valued at $36 billion.

He grew convinced that COVID-19 would have a deadly effect worldwide as early as January 2020, Forbes said. His years of experience with the mRNA method, a safety mechanism that protects against infectious diseases, came in handy when he decided BioNTech would pivot to finding a coronavirus vaccine.

“He cares only about science. Discussing business is not his cup of tea,” Bourla told The New York Times in November last year. “He doesn’t like it at all. He’s a scientist and a man of principles. I trust him 100 percent.”

With the development of BioNTech’s vaccine, the company’s stock has surged 900% from its 2019 IPO price. Sahin’s stake in the company is worth $6.1 billion, according to Forbes.

SEC filings show Sahin holds a 17% stake in BioNTech through a limited liability company called Medine. Amid a stock transfer by Medine to other beneficiaries, a filing in February showed neither the company, nor Sahin, had sold any ordinary shares since February 13, 2020, around the time the pandemic was just beginning to spread globally.

Read more:
Goldman Sachs says buy these 19 downtrodden stocks that have badly lagged the S&P 500 this year – but have immense upside potential heading into earnings season