UFC stars say MMA's new normal is 'eerie,' but they're unfazed about fighting in the middle of a pandemic 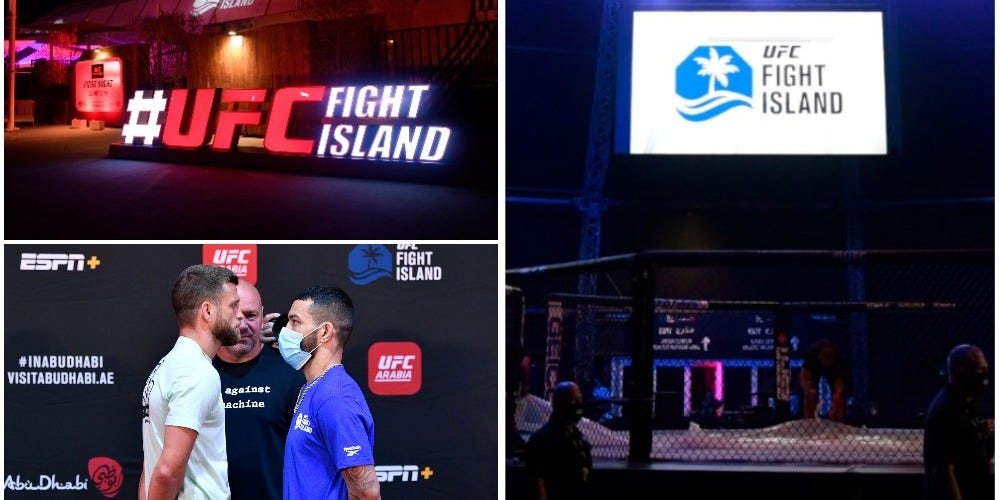 FIGHT ISLAND – Two athletes competing against each other in an upcoming UFC main event said they have had no concerns about training, travelling, and fighting during the global health crisis.

The UFC continually improves its coronavirus protocols so it can hold combat sports events safely, the featherweight rivals Calvin Kattar and Dan Ige told Insider ahead of their “Fight Island” match in Abu Dhabi Wednesday.

The world’s major sports leagues and organisations shut down from mid-March, but the UFC tried to restart operations one month later. This was not without criticism at the time.

The UFC intended to hold UFC 249, a big, pay-per-view show, on Native American land at the Tachi Palace so it could circumvent governmental restrictions on distancing and lockdowns in April.

But a phone call from the “powers that be” at Disney, which owns the UFC’s broadcast partner ESPN, nixed the MMA fight firm’s plans. It was later reported that the California governor Gavin Newsom requested Disney’s intervention.

The UFC then proceeded with three behind-closed doors event at the VyStar Veterans Memorial Arena in Jacksonville from mid-May, as Florida deemed sports an essential business.

It takes balls, and Dana’s got big ones to do what he did.

Though the fights themselves were high on quality, particularly Justin Gaethje’s devastating fifth round stoppage win over Tony Ferguson, the UFC was rebuked by the New York Times.

The paper said that the enforcement of its own safety procedures was “spotty,” as there “were interviews in the Octagon, a lack of social distancing, and missing masks.”

Kattar and Ige fought separate matches during the UFC’s residency in Jacksonville, and though it was described as an unusual experience to fight behind-closed doors, neither felt like they were ever doing anything wrong.

Ige, who out-pointed Edson Barboza on May 16, told us: “I supported it. I thought the UFC did everything right [with] the right steps, the right protocols, and they gave us an opportunity because that’s how we make money and that’s how we put food on our tables.”

Kattar destroyed Jeremy Stephens with a brutal knockout from elbow strikes, and praised UFC president Dana White for holding the events at that time.

“Through those types of setbacks when nobody wants to do anything, that’s sometimes where the biggest opportunities are,” he told us.

“I understand where the mindset was, but it takes balls and Dana’s got big ones to do what he did, and it’s paying dividends now.”

Ige described the experience as a “weird, eerie feeling.” He said: “Especially walking out with nobody in the arena. But once I got in there it was the same – seeing the Octagon closing shut, same thing. It was weird, different.”

Preparations to compete on “Fight Island” are easier than before

At the time of writing, there are 13,323,530 confirmed cases of COVID-19 which has led to 578,628 deaths worldwide. The BBC also reports of new, major, outbreaks in India, Latin America, and many states in the US.

But this has not perturbed fighters from travelling from the States, and fighting on “Fight Island” – the UFC’s new residency of events in a quarantined area of Yas Island in Abu Dhabi.

Insider asked the 30-year-old striker Ryan Benoit – who fights Tim Elliot in the co-main event Wednesday – what the reaction of his friends and family was like when he told them he’d be competing during a pandemic.

“They weren’t too worried about catching the virus,” he said.

“I’m good about sanitizing my hands, I haven’t got a cough, I felt good about it. My dad was in the navy for 24 years, in the Middle East a lot, and so he was excited for me coming over here.”

There have been notable changes in how athletes can compete now. Before he beat Barboza in Jacksonville, Ige said his training was severely limited because his gym wasn’t even open.

All Ige could do to get ready for his fight in May was strength and conditioning exercises in his home gym, go for a run outside, and punch his heavy bag.

“After that, everything started opening back up in Vegas so I was fortunate enough to go out there and have a regular training camp” Ige said.

I have respect for what Dana White was able to pull off because I know it wasn’t easy.

Kattar told us that the five shows the UFC held at Apex, a facility it owns in Las Vegas, were “run real smoothly” from the end of May through June.

He said: “There was no in-cage interviews, commentating was pushed back from the cage-side, and little things like that. I thought he [White] did a great job. Then it’s controlling the variables.

“And now here we are in Abu Dhabi, and I think the government helped out big time. This is the best [the UFC] has done, to date.”

Kattar said another major difference between the pandemic shows in Abu Dhabi and the ones in Jacksonville or Las Vegas, is down to the features of “Fight Island.”

After he came out of a mandatory 48-hour quarantine following two negative tests for the coronavirus, Kattar said he took two race cars for a spin around the Yas Marina Circuit, a $US1.3 billion Formula 1 Grand Prix track.

“One was a drifter, and one was for speed,” Kattar said. He then “jumped on a jet-ski for a little bit.”

“How cool is ‘Fight Island’ if you’re just looking at the damned hotel all day, you know? So getting out there a little bit, but now … it’s all business.”

As for what the UFC and its president Dana White is doing, holding its 10th show in the pandemic era with the ‘UFC on ESPN: Kattar vs. Ige’ “Fight Island” event Wednesday, Kattar said he’s grateful for the opportunity.

“I have respect for what Dana White was able to pull off because I know it wasn’t easy.”

The UFC gave a Brit a $US50,000 bonus after he overcame a fractured jaw and broken nose to KO his opponent

Kamaru Usman would welcome a ‘crazy fight’ with Georges St. Pierre after he dominated Jorge Masvidal on ‘Fight Island’