Rita Quinn/Getty Images for SXSWSusan Fowler onstage during the 2019 SXSW Conference and Festivals at Austin Convention Centre on March 10 in Austin, Texas.

When I began interviewing for a software engineering position at Uber, I was eager about the possibility of a new job – and very eager to leave my current toxic workplace. I was constantly daydreaming about working somewhere that had a real impact on the world, at a company where people were excited to come into work and passionate about solving problems, a company that had an HR department, a company where my manager wouldn’t say inappropriate things to me and joke about reading my personal text messages. And I wondered if this job at Uber could end up being more than just a job, if it could be the beginning of a real career in engineering. Because of this, what should have been a clear red flag to me during the interview process barely registered.

My first interview with Uber had gone remarkably well. But much to my dismay, my on-site interview was delayed. I waited a few days and heard nothing. Days turned into weeks. Just when I was ready to write them off, a recruiter reached out to me to schedule the interview. Uber was sorry for the delay, he said. They’d just returned from their company trip to Vegas, he explained, and had been too busy dealing with the fallout from that “crazy” trip to schedule interviews.

Unbeknownst to me, the recruiter’s description of the Vegas trip as “crazy” was a serious understatement. According to a New York Times story that ran after my blog post, the Vegas trip had been an incredibly debauched company gathering: One of the male employees assaulted a female employee, another stole a van, and several were caught with drugs. One of my coworkers later told me that all of the employees who went on the trip were “drunk out of their minds,” from early in the morning until late into the night, for the entirety of the trip. 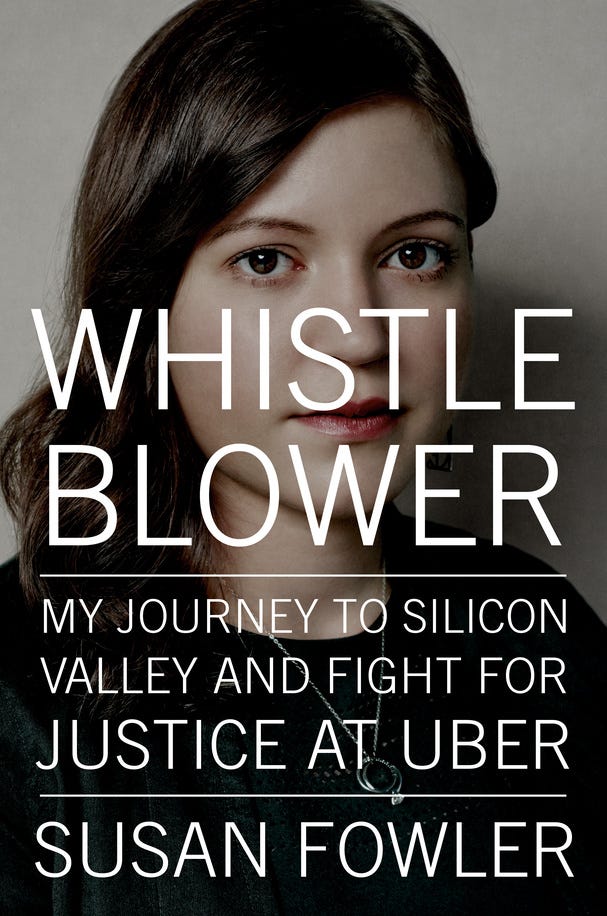 Courtesy of Susan Rigetti‘Whistleblower: My Journey to Silicon Valley and Fight for Justice at Uber.’

Unfortunately, the red flags continued. Before each of my on-site interviews, the interviewer had made a point of emphasising the large number of female engineers who worked on the teams – “twenty-five per cent!” they said, again and again – the only women I could recall seeing during my visit were the recruiting coordinator and the janitor.

Then came Uberversity. After I was offered the job, there were three different training programs that I needed to complete before joining my team. The first was “Engucation,” a week filled with daily classes on Uber’s engineering culture and practices, distributed systems, on-call routines, security practices, and so much more. Second came more specialised training, during which I would embed with one of the site reliability engineering (SRE) teams and learn the basics before I could join my permanent team. Third came a three-day-long training program called Uberversity.

New employees from all over the world had been flown into San Francisco for Uberversity. On the first day, hundreds of new employees from every team and country gathered in one of the unmarked Market Street offices.

After we found our seats in the large room, the very first thing we were told was that we were not allowed to date “TK.” The room buzzed with confusion as everyone began talking to one another. One of the men at my table leaned over and asked the woman next to him, “Who the f— is TK?” She shrugged and whispered, “I don’t know.” The woman onstage continued, saying that she knew all of us wanted to date TK, but it was, she said with a sigh, against the rules.

After that strange beginning came classes in business, communications, security, engineering, benefits, and more. In one class, we learned the 14 Uber values, which we were supposed to embody at all times: “Superpumped,” “Always Be Hustlin’,” “Let Builders Build,” “Meritocracy and Toe-Stepping,” “Principled Confrontation,” “Big Bold Bets,” “Celebrate Cities,” “Make Magic,” “Inside Out,” “Optimistic Leadership,” “Be Yourself,” “Be an Owner not a Renter,” “Champion’s Mindset,” and “Customer Obsession.”

Then, halfway through Uberversity, there was a competition for “most interesting person.” Presented as a team-building exercise, it was led by a high-ranking software engineering director. Each table nominated one person who was the most interesting person at that table, and then all of the nominees walked up to the stage, where he was supposed to choose the winner. After telling the story of my upbringing to my table, I was nominated, and walked up to the stage with the other nominees.

Once we were all lined up onstage, the software engineering director pointed to one of the women at the other end of the stage. “You,” he said. “And you,” he said, pointing to the next woman. “And you,” pointing to the other woman. “Aaand,you,” he said, pointing to me. “All of you,” he said, “step down, and go back to your tables.” I paused for a moment and laughed out loud, thinking it was a joke. There’s no way, I thought to myself, that this guy just eliminated all of the women by accident. I paused for a little too long, and he noticed I was still standing there onstage. He shot me an angry look and beckoned me to return to my table. I stepped down and watched as he then picked the most interesting man.

At the end of the day, I watched as my classmates grabbed their wristbands to go to the bar Uber had rented out for the new employees. I turned around and went home. I didn’t want to go. I had a bad feeling in the pit of my stomach, though I didn’t yet know why.

On the last day of Uberversity, we had an hour-long Q& A with “TK”: Uber’s CEO, Travis Kalanick. Afterward, the entire class of new recruits and several members of the Uberversity training staff gathered on the stage for a photo. Nearly everyone in the photo is wearing a black “Uberversity 2015” T-shirt – everyone, that is, except for some of the older Uberversity staff members, a few people standing in the back, and me.

When Business Insider contacted Uber for comment on the above excerpt, a company representative responded: “Susan’s courage to speak up was a catalyst for much needed change at Uber and in countless other organisations around the world.”

Adapted from WHISTLEBLOWER by Susan Fowler, published by Viking, an imprint of Penguin Publishing Group, a division of Penguin Random House, LLC. Copyright © 2020 by Susan Rigetti.