Uber promised to pay drivers who couldn't work because of the coronavirus. But drivers say Uber has been closing their accounts after they seek sick pay, and then ignoring or rejecting their claims. 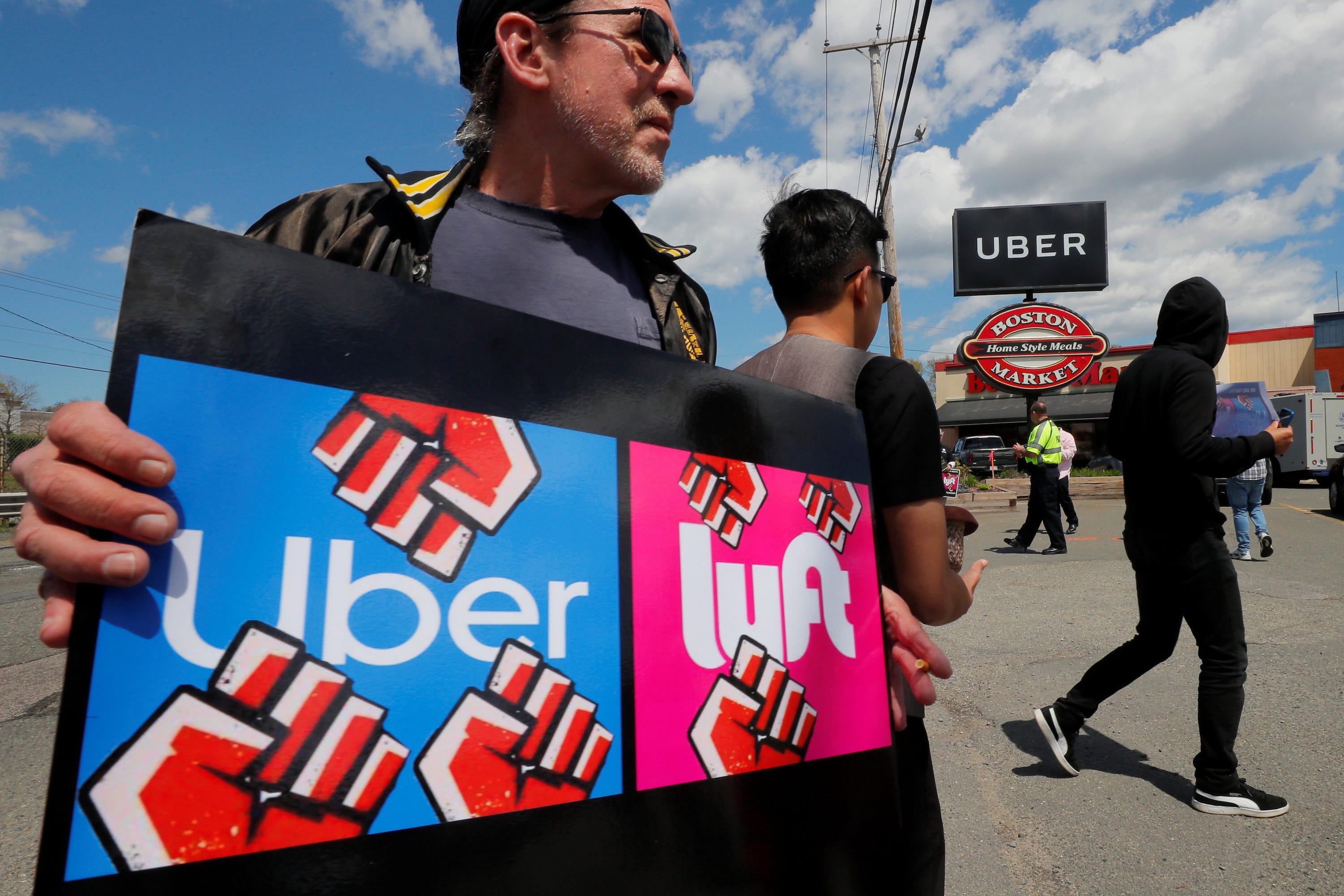 Zachary Frenette has driven for Uber in Phoenix, Arizona, for the past two years, earning “Diamond” status and a 4.96 average rating during that time, while completing more than 4,300 trips in the past year alone. He’s also HIV positive, meaning he has a weakened immune system that puts him at a higher risk of developing severe symptoms or dying from COVID-19, the disease caused by the novel coronavirus.

On March 18, two of his passengers, both coughing and sneezing, said they had just left a relative’s house who had tested positive for the virus. So, Frenette immediately stopped accepting rides and went to his doctor, who wrote him a letter telling him to self quarantine to “limit exposure and potential spread” of the virus. He then submitted that letter to Uber, which deactivated his driver account in an apparent effort to limit his contact with other passengers.

“My livelihood was in immediate risk,” Frenette said.

Frenette, who relies mainly on Uber for his income, knew that Uber had a program to pay drivers who couldn’t work because of risk of spreading the coronavirus. And with a doctor’s note highlighting his possible exposure, he assumed the company would honour its policy – after all, they shut off his account as part of it.

But Frenette and multiple other Uber drivers told Business Insider that the company hasn’t given them the pay promised despite their heightened exposure or risk, leaving them without pay and unable to work. Some also raised concerns that shutting down accounts but not compensating drivers who follow the agreement risks disincentivizing drivers from self-quarantining in the middle of a pandemic.

Statewide lockdowns across more than half of the US have forced thousands of drivers like Frenette off the roads, both to protect their own health as well as others’ – while those still driving have struggled to make any money, with rides dropping by as much as 94% in the US.

Earlier in March, in recognition of the precarious situation drivers have found themselves, Uber announced its intention to support them through a coronavirus financial assistance policy. Effectively a form of sick pay, the program promises to compensate drivers for up to 14 days, with the daily amount varying based on how much they had earned on the platform over the past six months.

But the initial policy was criticised for only applying to drivers who had confirmed cases of COVID-19 or were placed in quarantine by public health officials. Given the extremely limited availability of testing, Uber’s policy made it nearly impossible for many drivers to prove they had or were at risk of spreading the disease, which can be highly contagious even if a person isn’t showing symptoms.

After a backlash, Uber expanded the program to include drivers “personally asked by a public health authority or licensed medical provider to self-isolate due to your risk of spreading COVID-19” as well as drivers whose accounts are “restricted by Uber as a result of information provided by a public health authority that you have been diagnosed or have been exposed to someone diagnosed with COVID-19,” according to its website.

Uber drivers told Business Insider that even the new criteria was nearly impossible to meet. Some, like Frenette, said the company still wouldn’t pay up even with a doctor’s note detailing their risk of spreading COVID-19.

The company said in a statement that it had “been providing payments to eligible drivers and delivery people,” but did not elaborate how many drivers were eligible, or why some drivers’ claims were not answered, except to direct Business Insider to its policy.

“It seems like this is largely a PR campaign … to make it seem to the public like they’re doing something something for their extremely vulnerable drivers” said Veena Dubal, a professor of employment and labour law at the University of California, Hastings who focuses specifically on the gig economy.

Frenette believed he met the new criteria – risk of spreading the disease, account deactivated – yet Uber denied his claim, sending him a generic replies without explaining why he wasn’t eligible. After he called customer support “20 to 30 times,” Frenette got a response from Uber saying his documentation needed to cite his “risk of spreading COVID-19 as the reason” for his quarantine.

So, Frenette got his doctor to write a second note specifically mentioning that his March 18 ride meant he was at risk of spreading coronavirus as well as reiterating the risk to his health due to his weakened immune system, still to no avail.

Eli Martin, a driver in Chicago who has cystic fibrosis, a disease that affects the lungs (chronic lung diseases have been shown to put people at higher risk of serious illness from COVID-19), told Business Insider that he has had similar difficulties clearing the bar set by Uber, despite submitting a doctor’s note instructing him to quarantine and get tested for coronavirus due to reporting a dry cough, sore throat, fatigue, and body aches – the symptoms most commonly seen in patients with the virus. Martin could not get tested because of limited availability of kits.

Uber has specifically said that “other health conditions” do not qualify someone for compensation, leaving its most vulnerable drivers in the lurch. That’s prompted backlash from people like Nicole Knesek, a Sacramento-based driver who received a kidney transplant last year that requires her to take anti-rejection drugs, leaving her immune system suppressed.

“They just don’t think about anyone but themselves,” said Knesek, who told Business Insider her claim was rejected as well amid confusing and seemingly shifting criteria. “They changed it to work for them,” she said.

Frenette echoed her critique about Uber’s policy not covering those most at risk from the virus. “Preemptively, that should have already been introduced.”

But Frenette and Martin both submitted doctor’s notes that, in addition to mentioning their preexisting health conditions, noted their possible exposure to the virus and potential to spread it as a result.

While these drivers have spent weeks, going back and forth with Uber, sometimes waiting multiple days for a reply, the company managed to deactivate their accounts almost immediately. All three said Uber banned them from driving within a day of submitting doctor’s notes, implying it had acknowledged they shouldn’t be in contact with passengers – either to protect themselves or others.

Under Uber’s criteria, those deactivations should have entitled the drivers to financial assistance, but even though they’re not able to earn income on the platform, the company still hasn’t agreed to pay them under the policy.

“The safety and well-being of drivers on the Uber app is always our priority,” Uber said in a statement to Business Insider, adding that it has “a dedicated team working around the clock to support drivers and delivery people.”

Regardless of the technicalities of Uber’s coronavirus sick pay policy, the drivers expressed frustration more generally that the company isn’t doing more to support them at a time when they need help the most – and when Uber has publicly stated its intention to do so.

“Every time Uber comes out with something that sounds like it’s going to help drivers, in my experience, it typically doesn’t or is a colossal failure,” Martin said, adding, “they just don’t take driver’s safety seriously.”

“Uber should be held strongly accountable for their actions if they’re going to publicly portray themselves as generous, magnanimous, and caring, sharing part of this burden… and then turn around and completely dismiss, ignore and lie to the people they’re vowing to help,” Frenette said.

Part of that advocacy has been in the form of lobbying Congress to include benefits for gig workers in its $US2 trillion coronavirus stimulus bill, which it ultimately did in the form of making them eligible for unemployment insurance for the first time.

Uber CEO Dara Khosrowshahi, in a letter to lawmakers, also pushed for a third categorization of employee – somewhere in between full-time workers who enjoy benefits like healthcare and sick pay and independent contractors who don’t – that could keep Uber from having to pay for those benefits.

Critics criticised the move, however, accusing Uber of using the coronavirus outbreak as cover to ask taxpayers for a bailout.

“It’s so cruel, they’re essentially taking advantage of a pandemic to try and create laws and regulations that specifically accommodate their illegal business model,” Dubal said.

Do you drive for Uber, Lyft, Instacart, DoorDash, GrubHub, Postmates or any other gig work company? We’d love to hear what life is like for you during the coronavirus pandemic. Contact this reporter via phone or e
ncrypted messaging app Signal (+1 503-319-3213),
email ([email protected]),
or
Twitter (@TylerSonnemaker).
We can keep sources anonymous. PR pitches by email only, please.