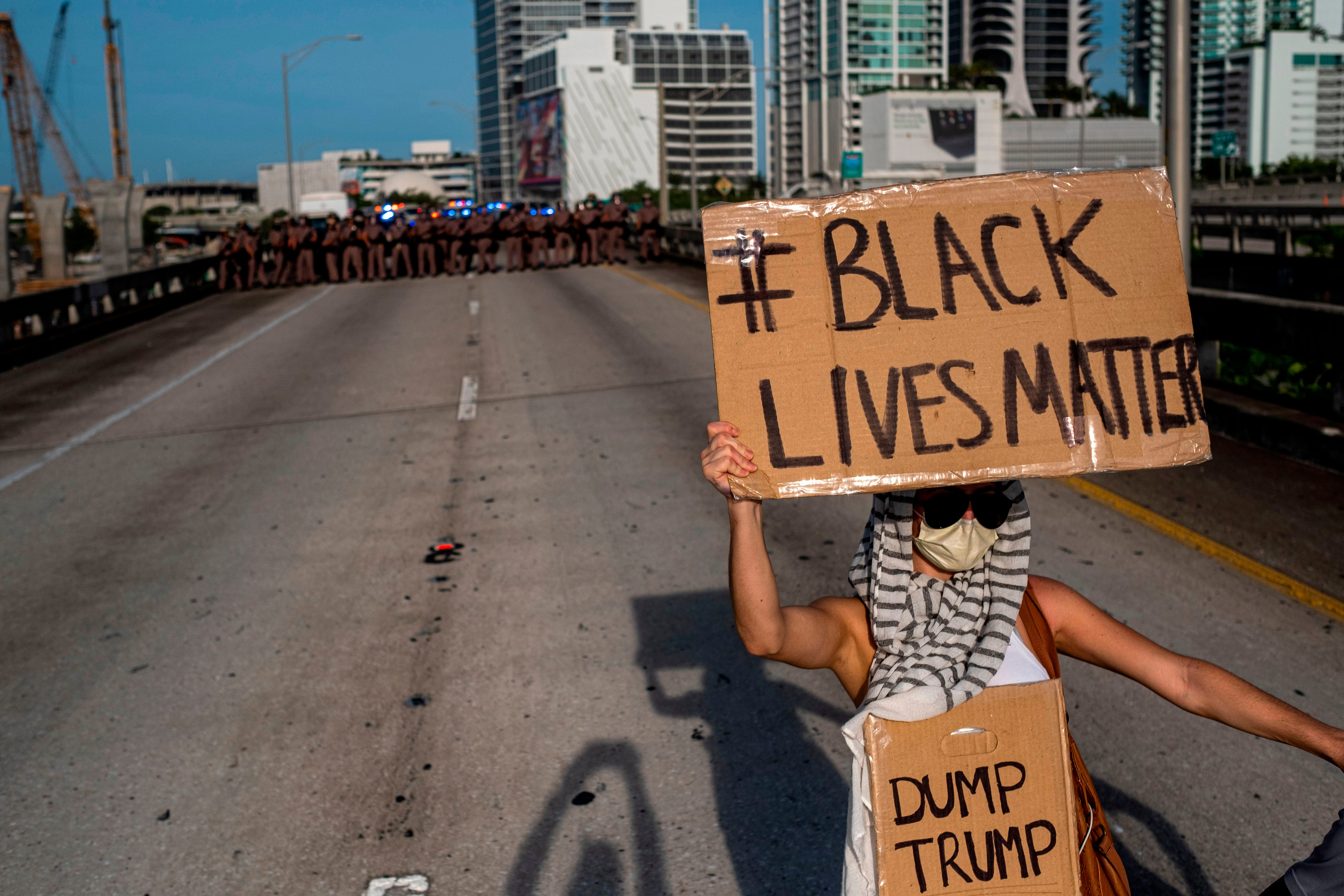 RICARDO ARDUENGO/AFP via Getty ImagesA protester holding a Black Lives Matter / Dump Trump sign stands in front of a Florida State Troopers line on a highway during a rally in response to the recent death of George Floyd in Miami, Florida on May 31, 2020. – Thousands of National Guard troops patrolled major US cities after five consecutive nights of protests over racism and police brutality that boiled over into arson and looting, sending shock waves through the country. The death Monday of an unarmed black man, George Floyd, at the hands of police in Minneapolis ignited this latest wave of outrage in the US over law enforcement’s repeated use of lethal force against African Americans — this one like others before captured on mobile phone video.

Both Uber and Lyft said they are suspending ride-hailing and delivery services in cities where curfews are imposed to discourage further protests like those that have rocked the country over the past week.

“Our teams on the ground are working closely with each individual city to best support them based on their needs and the local situation,” an Uber spokesperson told Business Insider in a statement. “Some cities have requested that we suspend operations completely while others want to ensure Uber is available for essential services. We’re also using the Uber app to educate riders and drivers about city curfews and remind them Uber should be used for emergency purposes only during this time.”

A Lyft spokesperson said the company is “following the direction of local government across the platform,” but declined to comment on further plans for its bikeshare subsidiary, which operates in cities including New York, Chicago, Washington D.C. and Minneapolis.

Micromobility – rentable bikes and scooters in cities throughout the country – have also become a mainstay of protests.

On Sunday, Lyft-owned Capital Bikeshare suspended service without warning as protesters converged near the White House. In Portland and Indianapolis, local news showed images of Lime scooters that had smashed through store windows, and in Dallas a widely shared video showed a Bird scooter being used as a battering ram against a squad car windshield.

A Lime spokesperson said the company is proactively removing its bikes and scooters from “select” cities when directed by local officials. “Safety is our top priority and we are actively working with cities to balance this with the need for affordable transportation options,” they said.

Bird said it also was in touch with local offials in any city where it operates, and planned to adjust availability based on those requests.

Cities in at least 15 states imposed curfews on Sunday, with many expected to impose similar orders throughout the week as demonstrations continue. New York Gov. Andrew Cuomo announced a curfew Monday for the city, the largest market for ride-hailing, from 11 p.m. to 5 a.m. Lyft also operates Citibike in New York City and Jersey City.

In some cases, like Chicago and Los Angeles, public transportation was also suspended as part of curfew rules, leaving overnight workers with few options for getting to and from jobs.