Uber and Lyft say the battle over AB-5 is about preserving flexibility for part-time gig workers. The reality is their businesses have become dependent on full-time drivers and they can't afford to pay them like employees. 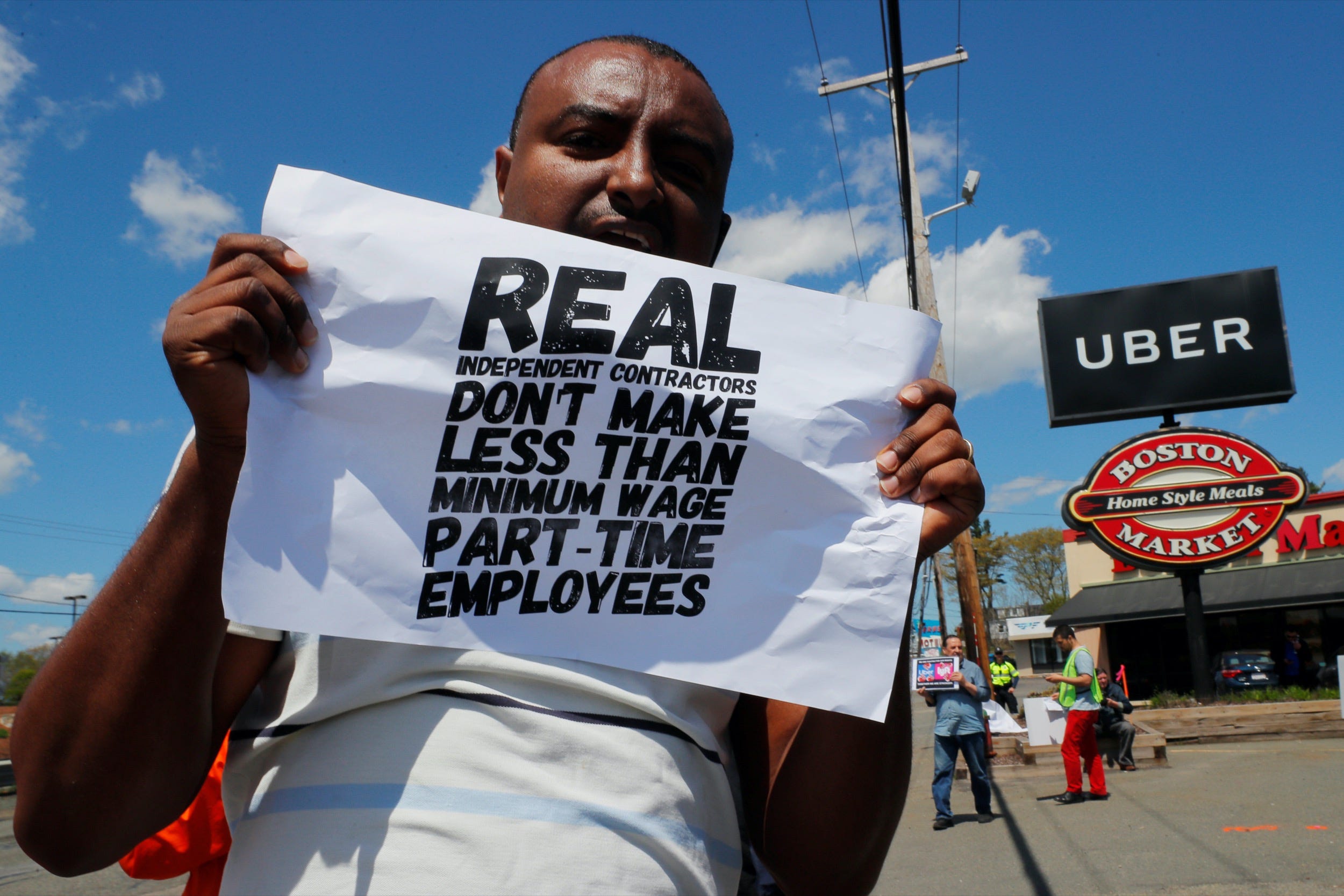 Brian Snyder/ReutersVeteran Uber and Lyft drivers say the companies’ focus on flexibility is a distraction from how they treat full-time drivers.

When people think of the gig economy, Uber and Lyft are almost always two of the first companies that come to mind, and when they think about drivers, they’re likely imagining someone working part-time, setting their own hours, in between jobs or supplementing another source of income.

A majority of the time, they might not be wrong. Uber claims 91% of its drivers are working fewer than 40 hours per week (currently, meaning during a global pandemic where demand for rides has tanked). But both companies have notoriously refused to share detailed data except with handpicked researchers, making it nearly impossible to know how accurate that number is.

When contacted for this story, spokespeople for Uber and Lyft both directed Business Insider to a study that the companies funded and stipulated that its researchers couldn’t share the data, meaning the study’s findings cannot be independently verified, a move that drew strong backlash from other academics who study the gig economy.

Researchers more critical of the companies found in a survey of Seattle drivers last October that two-thirds of Uber and Lyft drivers worked fewer than 32 hours per week. The companies both refuted the study’s findings, though Uber had refused to provide the researchers (who were commissioned by Seattle’s City Council to study drivers’ earnings) with detailed trip data, and Lyft refused to provide any data.

To the casual observer, the disputes may seem like wonky squabbles between academics, but the findings have pivotal implications for the future of Uber, Lyft, and potentially other gig services like Instacart, DoorDash, GrubHub, Amazon Flex, and Target-owned Shipt.

The flexibility to set your own hours and be your own “boss” has always been a key selling point for drivers – but also for Uber and Lyft, who have used it as their go-to argument to persuade regulators, courts, and the public that drivers should be considered independent contractors, not employees.

In California, where the companies have already lost that battle with regulators and at least temporarily with the courts, they have each spent at least $US30 million to convince voters, who could decide the issue in November, that the debate is about preserving flexibility for part-time gig workers.

But for those who work full-time or rely on driving as their primary source of income (or at least did before the pandemic hit), flexibility is less important compared to livable and predictable wages, healthcare, accident insurance, unemployment insurance, and labour protections that other employers are bound by and pay into.

While these drivers may make up a minority of the ride-hail workforce, they bring in a disproportionately large amount of the companies’ revenue, and both Uber and Lyft have business models that have depended for years on not having to pay labour costs associated with those drivers.

According to the Seattle study, the 33% of drivers who worked more than 32 hours per week accounted for 55% of trips.

“Uber and Lyft do really rely on full-time drivers, I think they just don’t want to pay them like employees,” Harry Campbell, author of a blog popular among drivers called The Rideshare Guy, told Business Insider.

The companies’ argument that their platforms were never meant to provide full-time jobs “is complete and utter BS,” Sergio Avedian, who started driving full-time in Los Angeles in 2016, told Business Insider.

Campbell, who drove full-time for several years starting in 2014 before transitioning to blogging, said that while individual part-time drivers aren’t particularly valuable to Uber and Lyft because they’re not reliable, “the narrative of ‘part-time only’ is very valuable to the companies because that helps them avoid the employment issues.”

The companies have spent millions trying to maintain that narrative, from refusing to share data with researchers and regulators, to deceiving local authorities, aggressively fighting regulatory efforts in other cities, and leaving markets to pressure officials into passing looser regulations.

Their efforts aren’t surprising, given the amount of money at stake. Wedbush Securities analyst Dan Ives has estimated that it would cost Uber an additional $US500 million and Lyft $US200 million each year to pay drivers as employees.

The companies argue that having to make the switch would cause hundreds of thousands of drivers in California alone to lose jobs, and force them to raise prices on consumers, but veteran drivers say this actually reveals a key issue with the companies’ business models: In a race to offer the lowest prices for riders and force out competitors, Uber and Lyft flooded the market with so many drivers and squeezed their pay so much that they have been forced to split a shrinking pie too many ways.

With more drivers competing for the same rides, the companies have been able to slash rates, which Uber did in at least 2014, 2016, 2018, and 2019 (Lyft has followed a similar trajectory), while also phasing out many bonuses.

“As these companies went to IPO, they used drivers as the bank account … so that they could look better for investors,” Nicole Moore, a part-time Lyft driver (pre-pandemic) and volunteer organiser for Rideshare Drivers United. “We lost 25% to 40% of our income last year, and we’re way below minimum wage.”

There have been clear beneficiaries of that approach: Uber and Lyft founders, early investors, executives, riders, and to a certain extent, part-time drivers who have made some side-income through the apps.

However, by building a business model around skirting labour costs for a significant number of drivers who are effectively working full-time, the companies have passed those costs to taxpayers, pensioners (whose investments in Uber and Lyft stock made private investors enormously wealthy), and other companies who do pay into social safety net programs like unemployment insurance.

“My cost of benefits and everything from Social Security to unemployment to workers’ compensation is about 20% of my payroll altogether,” Will Coleman, CEO of Alto, a ride-hailing company that hires both full- and part-time drivers as employees, told Business Insider.

“You’ve got 3 million drivers across the United States that are receiving unemployment benefits and the companies have never contributed a single dollar into those pools,” Coleman said. “Yours and my tax dollars, and frankly our children’s tax dollars, are paying for that cost that exists whether Uber and Lyft pay it or not.”

As political pressure has mounted against gig economy companies, they have responded by slowly coming out in favour of additional benefits and some wage protections for workers.

“We believe the status quo for drivers isn’t good enough which is why we are actively advocating for new benefits and protections,” an Uber spokesperson told Business Insider, referencing CEO Dara Khosrowshahi’s recent calls for “portable benefit” funds that companies like Uber and Lyft would contribute to.

But critics say these proposals – like the California ballot measure backed by Uber, Lyft, DoorDash, Instacart, and Postmates – fall short of what workers would be guaranteed under existing labour laws.

“They’re guarantees that are lower than basic labour standards, and let’s be real, labour standards are not a high bar,” Moore said. “I think California’s minimum is $US14 an hour – I would invite anybody to try to get an apartment making $US14 an hour and then also put food on the table.” (California’s minimum wage is $US13 per hour for companies that have more than 26 employees, and it’s slated to increase to $US15 per hour by January 1, 2022).

Drivers understand Uber and Lyft’s dilemma, and they recognise that, as Uber has warned, there would likely be some tradeoffs under an employment model – both for drivers and riders.

“People are addicted at those low prices, so [Uber and Lyft are] in between a hard place and a rock themselves,” Avedian said. “The second they raise those prices by 10% to pay their drivers those benefits that they deserve – the full-timers, let’s say – they’re going to lose customers.”

But many, from drivers to Wall Street analysts to labour experts to competitors pursuing alternative approaches, say the current model isn’t sustainable for anyone involved, and since Uber and Lyft have little wiggle room with investors, it’s either consumers or taxpayers who would likely foot the bill.

“Consumers are going to get more sensitised to it and understand that, yeah, they’re getting benefits, but ultimately it’s really hurting the people that are providing the service,” Coleman said.

Uber and Lyft have already been exploring changes that would let them keep drivers as contractors in case they lose their legal or electoral battles in California. But with the pandemic revealing how gig workers have been hung out to dry without access to sick pay, healthcare, or unemployment insurance, and more local governments looking to bolster protections for them, pressure on Uber and Lyft to treat drivers better – particularly their most loyal ones – won’t go away anytime soon.

“At some point you have to take care of these people,” Avedian said.