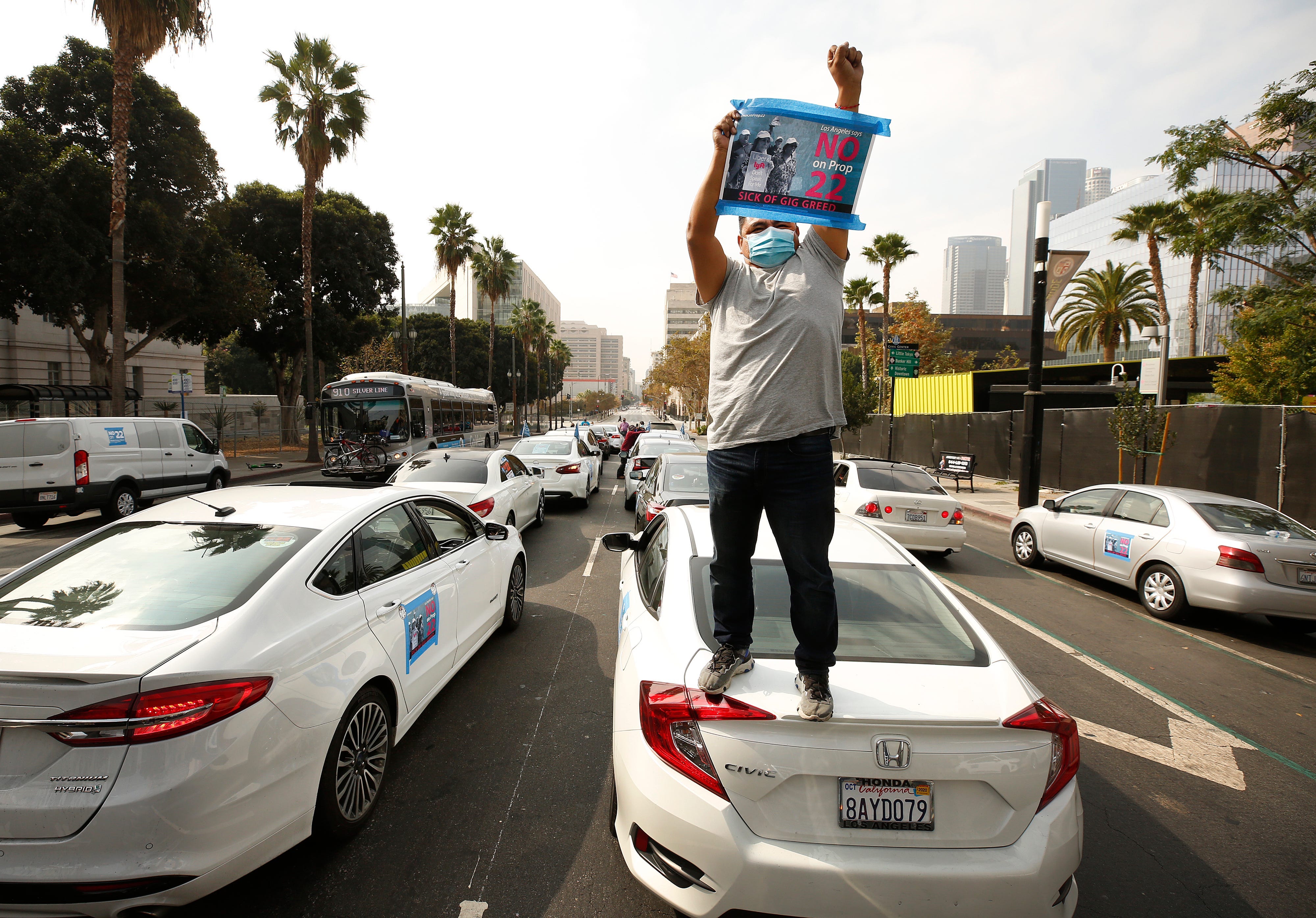 Al Seib / Los Angeles TimesRideshare driver Jesus Ibarra stands on his car in support as app based gig workers held a driving demonstration with 60-70 vehicles blocking Spring Street in front of Los Angeles City Hall urging voters to vote no on Proposition 22, a November ballot measure that would classify app-based drivers as independent contractors and not employees or agents, providing them with an exemption from Californias AB 5. The action is part of a call for stronger workers rights organised by the Mobile Workers Alliance with 19,000 drivers in Southern California and over 40,000 in all of California. Los Angeles on Thursday, Oct. 8, 2020 in Los Angeles, CA.

Uber’s bid to replace California’s gig-worker law with its own proposal is in the final stretch, and the company is warning that prices could skyrocket if the measure fails in two weeks.

If voters reject Proposition 22, which would provide a floating pool of benefits for gig-workers across multiple apps including Uber’s competitors, the company would likely be forced to classify drivers as employees. That means higher costs, which would ultimately be passed on to consumers in the form of fare increases, as the company remains under pressure to turn a profit.

“The vast majority of our cost is actually driver earnings,” Uber CEO Dara Khosrowshahi said at a virtual event hosted by The Wall Street Journal on Tuesday. “Prices would go up, we estimate, between 25 and over 100%, depending on what city you are.”

“In larger cities, let’s say San Francisco and LA,” he continued, “price increases will be in the 20, 30, 40% range. And in certain smaller cities, price increases would be 70, 80, 100%. Those are the estimates that we have. These are not made up estimates.”

Khosrowshahi pointed to Switzerland, where in September a Geneva court ruled couriers were employees, not contractors. “That resulted in 77% of couriers being out of work,” he said.

The flexibility both within Uber’s app to work whenever and wherever they’d like, and to work across multiple apps, has been central to the company’s argument against classifying drivers as employees, even as a court ordered it to do just that over the summer. Wall Street analysts have estimated the cost of that change could effectively bankrupt the company.

“There is nothing in current state law that would require Uber, Lyft and other gig companies to schedule shifts or limit driver flexibility,” Gig Workers Rising said in a statement Monday, as Uber sent in-app messages urging its riders and workers to vote for Prop. 22. “These billion-dollar corporations, like every other business in the state of California, are simply being asked to offer drivers basic benefits like sick leave, overtime pay and workers’ compensation, which they can do while maintaining driver flexibility.”

Recent polls suggest the proposition has a good chance of passing. That’s good news for Uber and for its shareholders, as rides remain more than 50% below normal volumes, Khosrowshahi said. Third-party data has suggested the rebound in ride requests has plateaued as the US struggles to contain its coronavirus outbreak and other countries see second waves.

“Recent engagement and macro data suggest the US continues to see a slow recovery, especially on the West Coast, while recovery seems to have flattened in some international cities,” JPMorgan analysts said last week.

Uber will report its third-quarter financials on November 5, providing the most granular insight yet on its recovery since June.

“We’re looking at all of our options,” Khosrowshahi said at the conference. “We’re in the transportation business, so we’re going to do our best to operate in California. Where we can operate is a question mark, and the size and scale of the business will be substantially reduced.”